Guerrillas in Our Midst

Two designers known for their edge, Alexander Wang and Eckhaus Latta, showed in Brooklyn on Saturday. 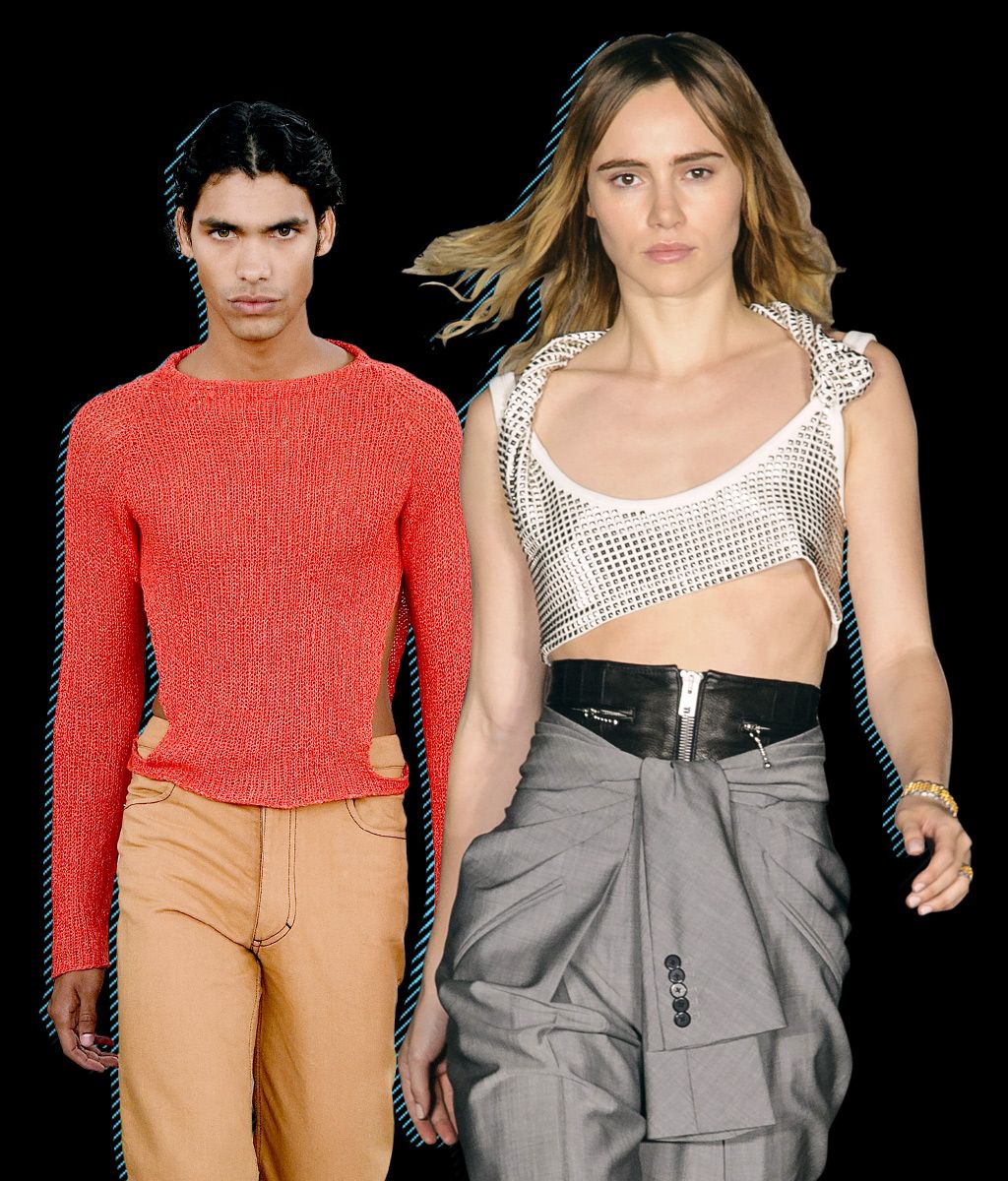 Almost everything about Alexander Wang’s show last night was counterintuitive. It was held in the middle of a public street in Brooklyn, yet we the people were crammed six deep behind barricades and yelled at by security men. It was supposed to feel spontaneous, like a guerrilla act, and yet it required nearly four hours of my time to get there and back. The plan called for a total of three street shows — two in Manhattan, the last in Bushwick — each visited in succession by a party bus loaded with models (and Wang), and trailed by pickup trucks with portable lights.

Guerrilla hardly means what it once did. Though it’s nice to know that VIP will always mean VIP. While everyone was waiting behind the barricades, and others were trying like rats to get in, Kim Kardashian West and Kris Jenner were escorted down the nearly empty, darkened street to a waiting area, video lights illuminating them.

By the time the bus got to Bushwick, images from the earlier shows were already on the internet. I could have caught the whole thing online in about ten minutes. Yet I think Wang’s instinct to try a different method of showing was absolutely correct. Runway shows have become stultifying, and the idea of taking models on the road, if only in two boroughs, is as old and as thrilling as Kesey’s Merry Pranksters. Perhaps the logistics were insane, but Wang’s motives were surely pure. Wang revels in sending editors to far-flung New York City locations — previous shows have been in the Navy Yard, a derelict theater in Harlem, and on Wall Street. This season’s various venues engaged more people. The bus itself signaled movement and fun. And the clothes were a tightly edited mix of summer minis and layered but polished streetwear, the best bets being Kaia Gerber’s opening white shift, a simply layered tank dress, and blossom-y army fatigues worn with a black leather bustier and a white lace top.

Earlier Saturday, on the same street in Brooklyn, Mike Eckhaus and Zoe Latta showed their collection at 99 Scott, a relatively new cultural space in a former industrial building. The raw, elegant room was a well-chosen showcase for the designs of this talented couple, whose collections since they started Eckhaus Latta, in 2011, have grown in depth and refinement.

First of all, the designers have a great sense for models — some professional, others friends — whose faces and body language help to give mystery and no small amount of sexuality to the clothes. I’m tempted to say that what made this show so watchable was the beauty of hard female faces and not-quite-perfect bodies in clothing that insisted on being ordinary — cropped, scoop-neck tops with slim skirts; a blue striped cotton shirtdress; a knitted, deep-blue tank dress. But that sounds like Latta and Eckhaus are merely doing that thing where the uncool becomes the cool. I think they’re too wary of that standard fashion trick — they’re not interested.

Instead, they trust their sensibility and their community, no doubt reassured by the fact that their stuff sells out. Although they’ve expanded their knitwear, it has not lost its raw, almost homemade identity.
Their colors are particular too — marigold orange with cadet blue, poppy with sand. This season, the new addition is classic suiting, worn by both genders. The silhouette is distinctly Eckhaus: a somewhat full shoulder and chest, with a barely defined waist, and wide-leg trousers. It makes enough of a fashion statement, but it’s still pretty plain. It’s not trying too hard. But the important thing is that Latta and Eckhaus have struck a silhouette that’s fresh and which is theirs to build on.

In so many ways, Eckhaus Latta’s show yesterday reminded me of early Helmut Lang shows in Paris, although the aesthetic is obviously different. They, too, can impart a subtle sex appeal. They can handle an idiosyncratic fit without it looking forced. They’re good at scrubby, unrefined textures. Above all, though, they know how to stay in their own fashion lane — and let others be fascinated and perplexed by their work.

Guerrillas in Our Midst

movies 2 mins ago
Daniel Radcliffe, We Are Ready for Your Music Career The actor will be portraying Weird Al in an upcoming biopic.
the bigger picture 28 mins ago
Wrestling Has a Dark Side. But for Some, It’s a Safe Space. Photographer Sofie Vasquez spent a year traveling the country, documenting the indie-wrestling scene.
By Bindu Bansinath
keeping up with the royals 1:29 p.m.
Uh, Prince Andrew Has a Teddy Bear Collection? A new documentary claims he yelled at staff who didn’t arrange his stuffed animals to his liking.
dinosaur bones 12:48 p.m.
This Is a Truly Surreal Zoom Background Dwayne “the Rock” Johnson made a recent TV appearance sitting in front of an enormous dinosaur skull named Stan.
celebrity 10:52 a.m.
Tracing the Ongoing Feud Between Britney and Jamie Lynn Spears Things spiraled out after Jamie Lynn went on Good Morning America to promote her new book.
recommendations Yesterday at 3:00 p.m.
We Should All Be Wearing House Shoes A foolproof way to avoid bringing a dustpan’s worth of dirt into your bed.
k-i-s-s-i-n-g Yesterday at 10:00 a.m.
Lexi and Fez, Sitting in a Tree Could this be Euphoria’s most unexpected romance?
buzz buzz buzz Yesterday at 9:00 a.m.
All Our Burning Questions From the Yellowjackets Finale Some of the biggest mysteries remain unraveled.
how i get it done Yesterday at 7:00 a.m.
How Milk Bar’s Christina Tosi Gets It Done “More colorful, more magical, and more rule-breaking.”
By Kristen Bateman
astrology Jan. 16, 2022
Madame Clairevoyant: Horoscopes for the Week of January 17 Aquarius season begins this week, and there’s a full moon in sensitive Cancer.
By Claire Comstock-Gay
sex diaries Jan. 16, 2022
The Mom Trying to Meet Her Online Boyfriend IRL This week’s sex diary.
kimye Jan. 16, 2022
The Ups and Downs of Ye’s Dramatic Weekend From a tell-all interview to the saga of Chicago’s fourth birthday party.
news Jan. 16, 2022
Everything We Know About The Texas Synagogue Hostage Situation The suspect has been killed, but a motive remains unclear.
vaccines Jan. 16, 2022
Australia Is Now Djokovic-Free Unvaccinated tennis star Novak Djokovic is out.
yellowjackets Jan. 15, 2022
Misty From Yellowjackets Is the Scariest Character on TV Beware the quiet ones.
culture Jan. 14, 2022
Jerry Harris Was Our Hero He was the most-loved cheerleader on Cheer’s premiere season. Season two charts his downfall.
friday sales Jan. 14, 2022
19 Things on Sale You’ll Actually Want to Buy: From Aesop to Crocs Including a dog collar that’s rarely on sale and one of our favorite portable speakers.
beauty Jan. 14, 2022
How Gym Culture Went From Punishing to Meditative People are starting to insist that exercise focus on mental health, not be an obligatory regimen that will change the way they look.
celebrity Jan. 14, 2022
Neve Campbell Was Once Attacked by a Bear on a Movie Set “They said dip your hand in honey and just run.”
bffs Jan. 14, 2022
In Yellowjackets, Female Friendship Is Horrific That’s why I like it.
More Stories