Art and Fashion Do Mix 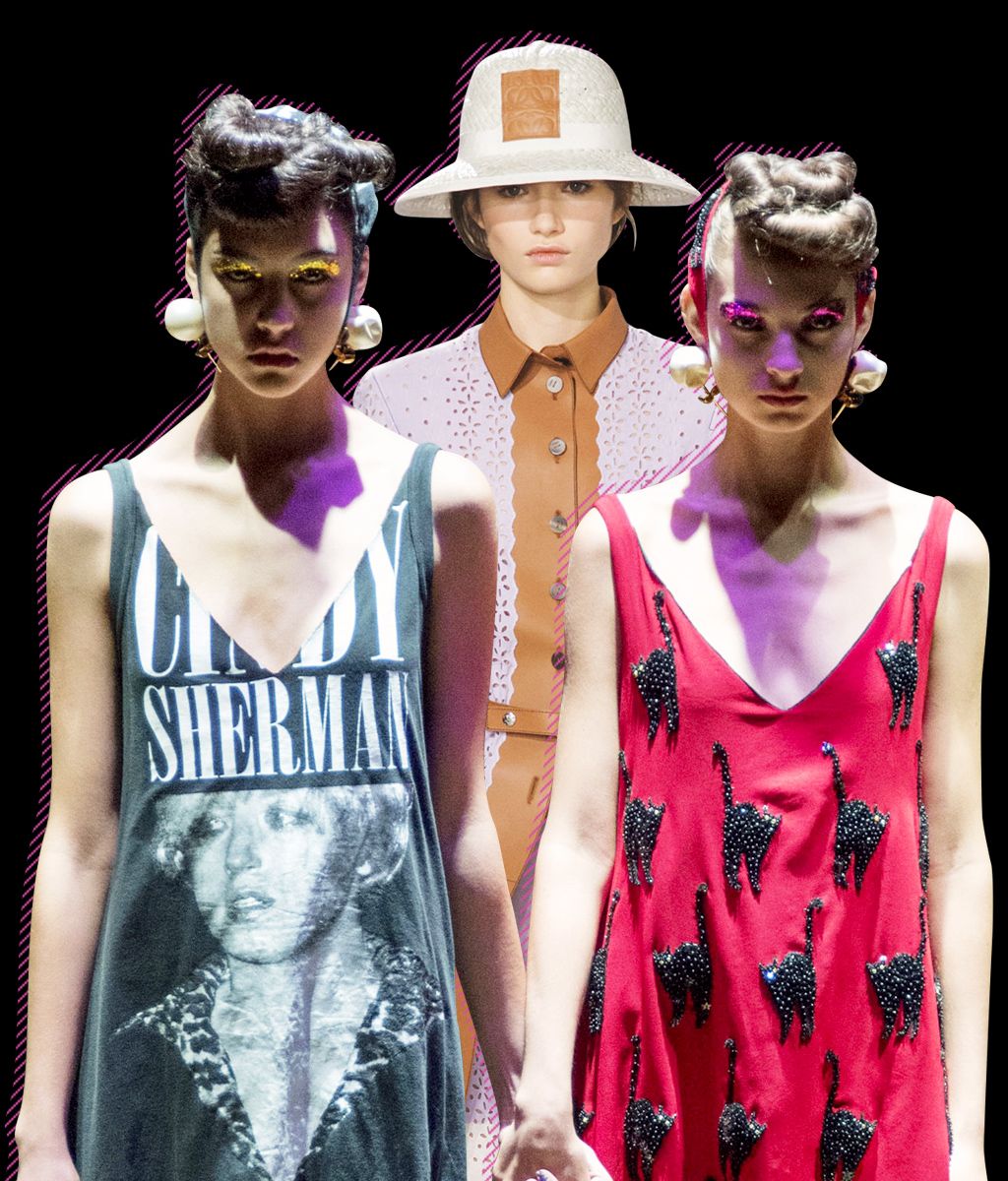 A designer’s backstage comment can often seem like a rehearsed soundbite. Or sometimes the explanation is so esoteric I wonder if we’re talking about the same bunch of clothes. Not so with Jonathan Anderson after his Loewe show yesterday. “I want something that people will want to go and touch,” he told reporters.

That was my sense watching the show, too — and not because the materials were so unfamiliar that I needed to touch them in order to grasp their origin or texture. The most appealing of Anderson’s dresses were in cotton or cotton jersey. But the designs looked so considered, and so sensual on the body, that you wanted to feel them. The runway tends to automatically place fashion at a distance from the viewer, even when designers show their clothes at eye-level rather than on a raised catwalk. Models can also add to that sense of remoteness. The term “luxury” adds still another layer of specialness and gravity.

Anderson breaks down those assumptions. Loewe’s spring clothes are certainly luxurious (and no doubt as pricey as ever), but the methods and materials that Anderson uses go a long way in expressing a modern idea about high fashion: It should be a blend of the realistic and the particular. “Grounded” was the word that Anderson used backstage. That describes the show opener, a long white T-shirt dress with a crinkly center panel of gingham in three different faded hues, and another dress with a slightly flared skirt made in quilted patchwork. There were also maxi shirt dresses.

A travel theme loosely united the clothes, with colors and textures that suggested African and South American traditional handcraft. The ivory woven hem of a black blazer could have come from Peru, a heavily fringed sarong skirt in an antique-looking floral print from a stopover in Argentina. Anderson successfully mutes the traditional, though, to bring out a newer sense of style. Asked backstage about the elf-toed sneakers on the runway, he laughed and said they were based on Moroccan woven sandals. But a literal version would have looked mundane. Besides, said Anderson of the sneakers, “they make you laugh.” 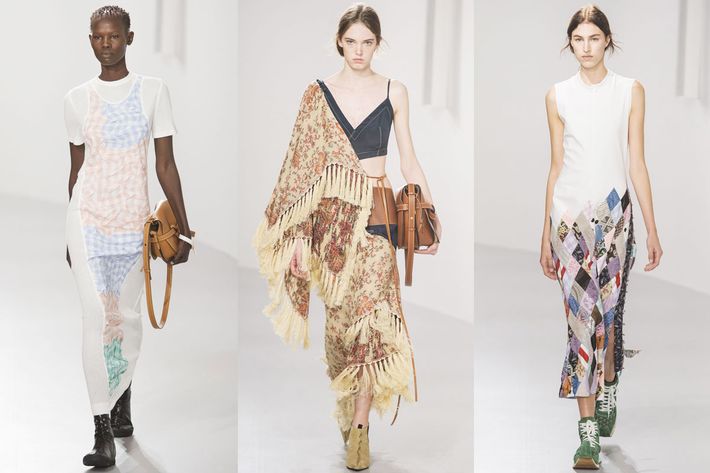 The Undercover show was a gas. It’s hard to make the notion of twins or doubleness seem new — much less thoughtful — but Jun Takahashi did. First of all, he incorporated images by Cindy Sherman into many of the garments, and in a general way, the premise of her work into the concept of the show. Takahashi first met Sherman about six years ago in Tokyo, where he lives. “Doubleness relates very much to Cindy’s work,” he said backstage, through a translator. Sherman photographs herself in her portraits, and has played any number of roles, from starlet to fashion-obsessed socialite to aging matron. She also has worked with dolls, and while still an art student did a film called Doll Clothes.

I had a feeling that Takahashi had considered all of Sherman’s work, and not just her more familiar fashion-centered images or the Film Stills. Indeed, what was so magical about the show was that it made you laugh but it also caused a shudder, which is often one’s response to Sherman’s photographs. We’ve seen contemporary art used by several designers this season — Warhol at Calvin Klein, Keith Haring at Coach, Niki de Saint Phalle at Dior — but, in contrast to Undercover, those efforts seemed more superficial. Takahashi’s approach was deftly layered.

The models were paired off, and at the same time, they looked a bit like dolls — in girlish dresses, with matching flat caps over their 1940s-era poodle hair, and big pearl earrings that suggested little girls playing dress-up. The idea of doubleness was also conveyed by the fact that many of the outfits were obviously reversible. So, one girl’s printed silk chemise was the reverse side of her runway partner’s. The first Cindy image, on a T-shirt dress, had a reverse of matronly lipsticked mouths appliquéd on pale blue silk.

Takahashi also played with the artist’s All-American sounding name, embroidering it in script on a boxy pink leather jacket (the reverse was a frumpy, yellow ribbed cardigan). One of the cleverest pairings was a ladylike satin suit. The ice-blue jacket of one version featured a portrait of Sherman in a yellow Chinese dress; the rest of her portrait was on the skirt worn by the other model.

Real sets of twins, wearing babyish dresses embroidered with bloodlike streamers of beads, closed the show, a nice nod to “The Shining” and Stanley Kubrick. The music from “Eyes Wide Shut” opened the show. The whole thing was beautifully and thoughtfully done, and the twins, even after all the doubleness, came as a genuinely creepy surprise. 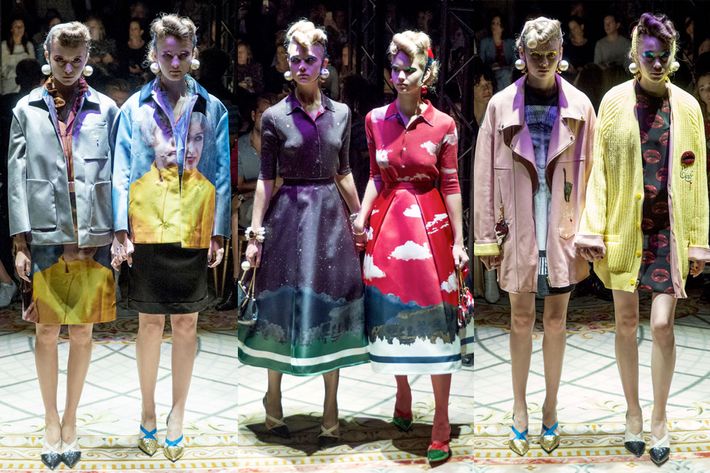 Art and Fashion Do Mix

See All
liveblog 2:58 p.m.
Eric Adams Opens Wide Lead in NYC Mayoral Race: Updates Andrew Yang has conceded as Kathryn Garcia and Maya Wiley scrap for second place.
sleep 2:44 p.m.
What’s ‘Revenge Bedtime Procrastination,’ and How Do I Stop It? You’ve probably done it, even if you didn’t know it at the time. Here’s how to overcome it.
swellness 2:37 p.m.
What Is Diastasis Recti, and Can It Be Fixed? How to know if you have it, and how to treat it.
celebrity 2:07 p.m.
Michael B. Jordan Apologizes After Rum-Brand Backlash Nicki Minaj and others accused the actor of cultural appropriation when he announced the name of his new alcohol brand.
the cut podcast 12:59 p.m.
Into the Thicc of It On this week’s episode, separating our happiness from numbers on a scale.
By the Cut
help!! 12:35 p.m.
What Fresh Hell Is This, Netflix? Sexy Beasts is like Netflix said, “Oh, you want reality dating shows? Well, here you go, you little freaks.”
none of my business 11:33 a.m.
Wow, That’s a Small Law Firm of a Family Behold, the Baldwins at the Boss Baby 2 premiere.
pride essentials 10:00 a.m.
Isabel Sandoval Grew Up With A League of Their Own and Wong Kar-Wai The filmmaker behind Lingua Franca on the art that shaped her.
dream date 8:00 a.m.
Nicholas Braun is No One’s Fool The Succession actor talks bad romances, dating rituals, and his very misunderstood Zola character.
By Sangeeta Singh-Kurtz
the group portrait 8:00 a.m.
The Crew of DJs Behind the Best Parties in Brooklyn This Summer “All the DJs have been at home becoming themselves, working on their music,” says one. “The sound is about to be out of control.”
By Tembe Denton-Hurst
celebrity Yesterday at 6:45 p.m.
The Vindication of #FreeBritney As Spears is about to speak publicly about her conservatorship, her fans are finally being taken seriously.
By Angelina Chapin
always shopping Yesterday at 6:03 p.m.
All the Best Fashion Deals on Amazon Prime Day 2021 We found markdowns on jeans, leggings, and a really cute slip dress.
let's talk about breasts Yesterday at 6:00 p.m.
8 Non-Ugly, Highly Effective Minimizing Bras Because you want something flattering and aesthetically appealing.
quirky! Yesterday at 5:55 p.m.
Of Course Cara Delevingne Lives in an ‘Adult Playhouse’ At least she’s having fun …
always shopping Yesterday at 5:46 p.m.
The Best Prime Day Deals for Your Home From knife sets to surprisingly chic coffee tables.
why is your skin so good Yesterday at 5:21 p.m.
How This Gut-Health Advocate Gets Her Skin So Good Carla Oates believes healthy skin starts with your microbiome.
the object of our affection Yesterday at 3:15 p.m.
The Crop Top That Gave Me an Identity Crisis And other standout looks from the men’s spring 2022 collections.
xoxo Yesterday at 2:39 p.m.
Let the Rich Teens Be Terrible Do we really need to watch the Gossip Girl cast wrestle with their privilege?
auto-refill Yesterday at 1:17 p.m.
The Beauty Products Bella Hadid’s Makeup Artist Uses to the Last Drop Including the $3 soap that’s “the best makeup-brush cleaner in the world.”
By Daise Bedolla
swellness Yesterday at 12:56 p.m.
How Heat Protectants Work to Shield Hair From Heat Damage And what to do if the damage is already done.
More Stories