One of the Brooklyn Museum’s most renowned artworks on permanent display is Judy Chicago’s 1979 installation The Dinner Party, a cavernous room on the fourth floor. Created by Chicago and a group of 400 workers and volunteers, the triangular dinner table imagines the contributions of female artists, religious leaders, political figures, and mythological characters are inextricably linked. Thirty-nine place settings are arranged for women including Virginia Woolf, Sojourner Truth, and Georgia O’Keeffe — set with golden chalices, polished silverware, and plates sculpted with shells and flowers to resemble vulvas. The names of 999 more women are engraved in gold on the white-tile floor below.

The Dinner Party is the focal point for the Brooklyn Museum’s Elizabeth A. Sackler Center for Feminist Art, which celebrates its tenth anniversary this fall. To honor the occasion, curators have organized the exhibition “Roots of ‘The Dinner Party’: History in the Making,” opening October 20 as a behind-the-scenes look at how the table was made. Preparatory sketches and test plates made between 1974 and 1979 will be on display, showing Chicago’s scrupulous creative process. Archival photos show her team of young women hand-painting china plates, stitching tapestries, and inscribing women’s names on gleaming floor tiles. A mood board–style collage of concentric, ombré-shaded lace ribbons reveal traces of a final plate design, which paid tribute to Emily Dickinson.

“I was a very volatile young woman and I could lose my temper,” Chicago says over the phone, remembering long studio days. Her friend Diane Gelon,* who organized the project in a Los Angeles studio and The Dinner Party’s subsequent international tour, refused to take a salary for the job at the time because, as she often told Chicago, “If you don’t hire me, you can’t fire me, and I’m not going anywhere!” Over five years of work on the installation, Chicago got divorced and started a daily running routine while clocking 17-hour workdays. The core team of artists was equally ambitious and went on to various careers, including working as artist Bruce Nauman’s assistant, becoming a tax attorney, and creating award-winning documentary films.

“We are witnessing the story of erasure that The Dinner Party tells right now,” Chicago says.“Behind the scenes, the Trump administration is silently and stealthily reversing gains in civil rights; in transgender, lesbian and gay rights; and changes in women’s rights.”

The Dinner Party is often celebrated as a groundbreaking work of 1970s feminist art. It elevated traditional, women-associated crafts (like textiles, needlework, and ceramics) as high art, and proposed a revisionist take on male-dominated history. The installation certainly drew attention to women underrepresented in textbooks, but it also defined “woman” in extremely limited terms. It excluded trans people and included only a handful of women of color. To expand The Dinner Party’s second-wave purview and recognize significant contributions from radical women, the Brooklyn Museum is currently planning a teen engagement project that will catalogue more contemporary artists in a forthcoming virtual fourth wing.

Other cities are staging exhibits that pay tribute to Chicago’s storied art career. In Washington D.C., the National Museum of Women in the Arts will exhibit never-before-seen works by Chicago, as well as a series of photos that capture the studio process behind The Dinner Party. And earlier this month, San Francisco’s Jessica Silverman gallery exhibited the show “Pussies” — a collection of Chicago’s eccentric images of cats.

“It’s quite astonishing that it’s taken 40 years for these shows to happen,” Chicago says, letting out a heavy sigh. “Better late than never!”

“Roots of ‘The Dinner Party’: History in the Making” will run from October 20, 2017, through March 4, 2018 at the Brooklyn Museum. “Inside the Dinner Party Studio” is on view now until January 5, 2018 at the National Museum of Women in the Arts in Washington, D.C.. “Judy Chicago’s Pussies” is on view now until October 28, 2017 at Jessica Silverman Gallery in San Francisco.

*This post has been corrected to show the correct spelling of Diane Gelon’s name. 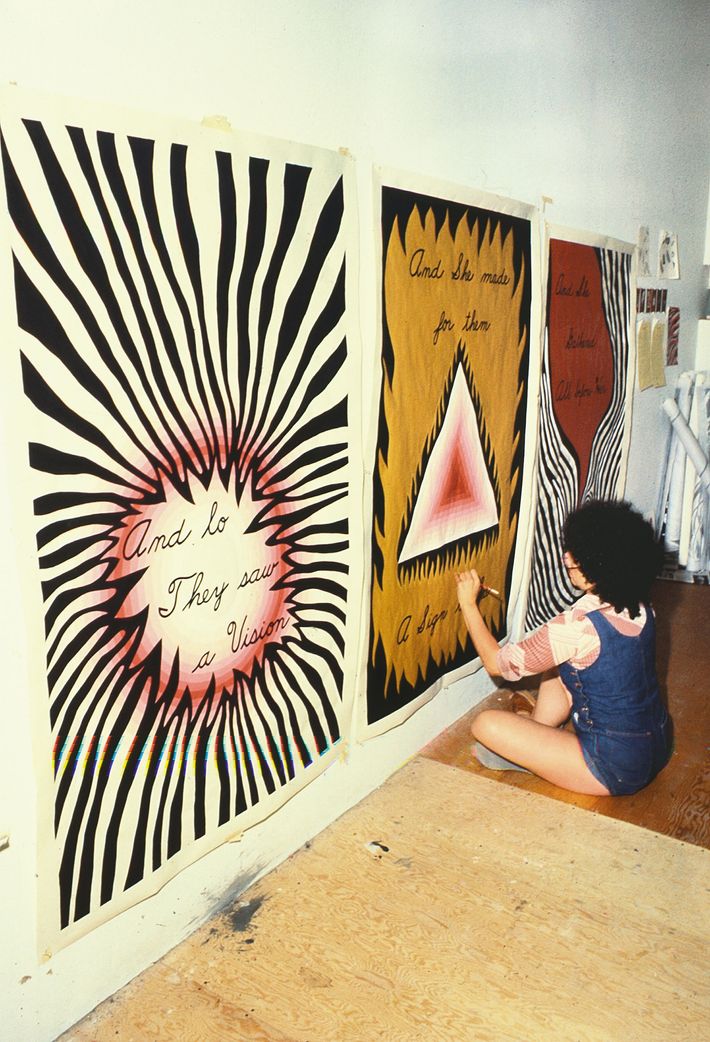 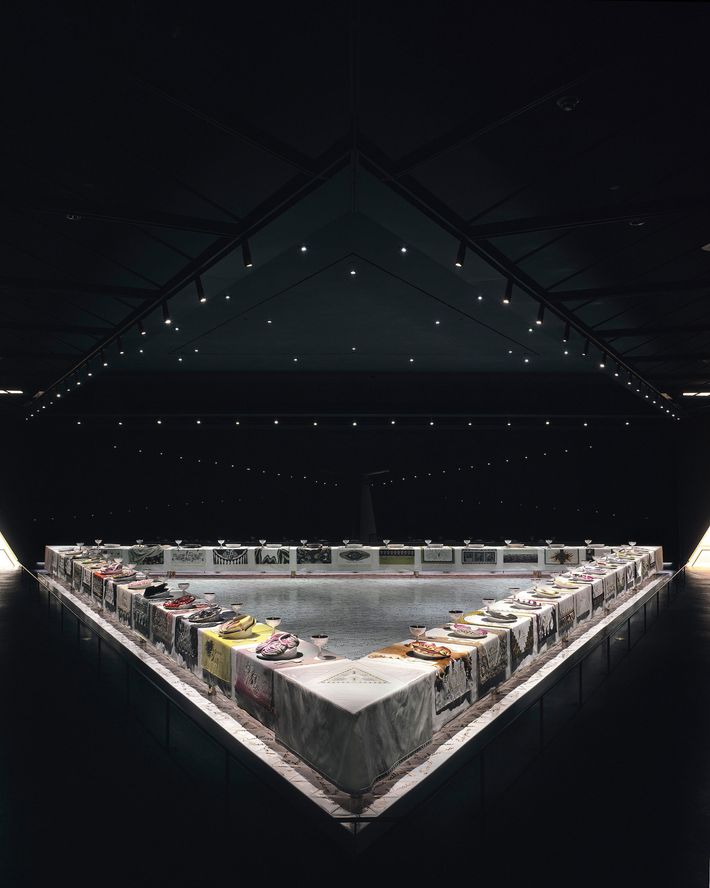 Judy Chicago stands in The Dinner Party studio; behind her, stacks of chalices are waiting to be fired and painted, 1978. 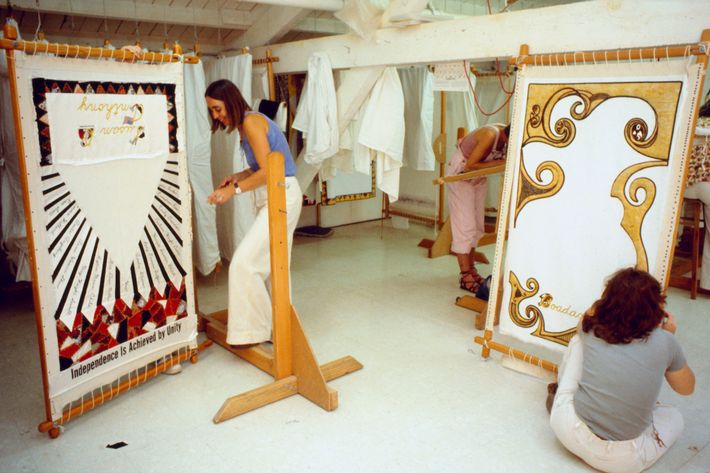 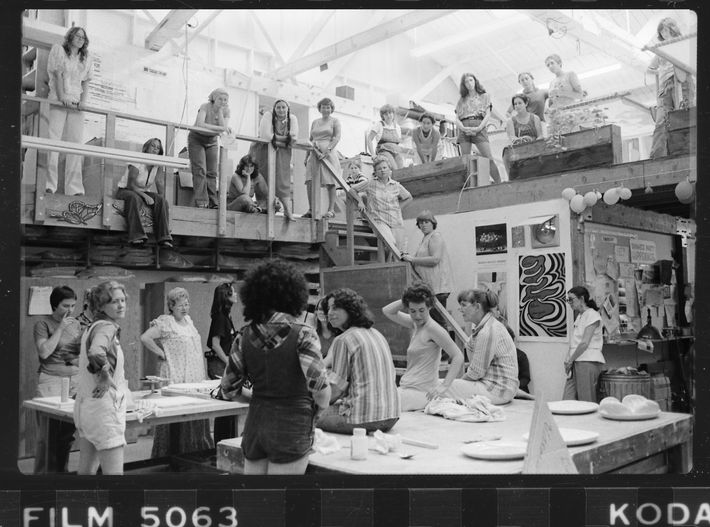 Judy Chicago, in the foreground wearing overalls, addresses a group of Dinner Party volunteers in the studio, ca. 1978.

Study for Virginia Woolf from The Dinner Party, 1978. 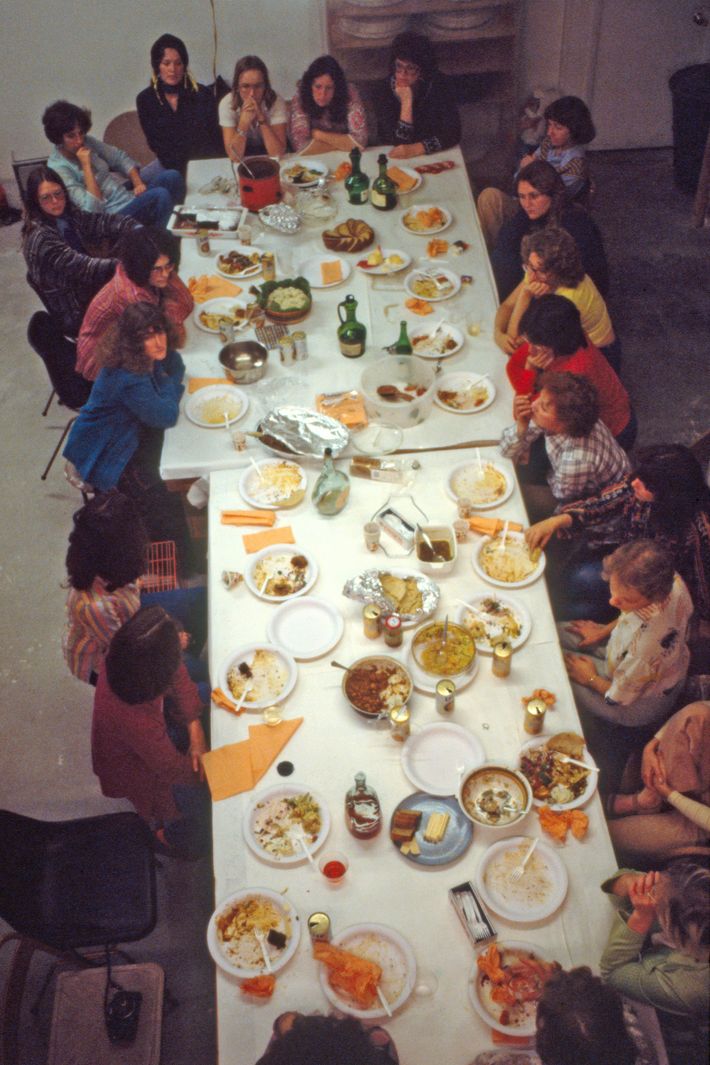 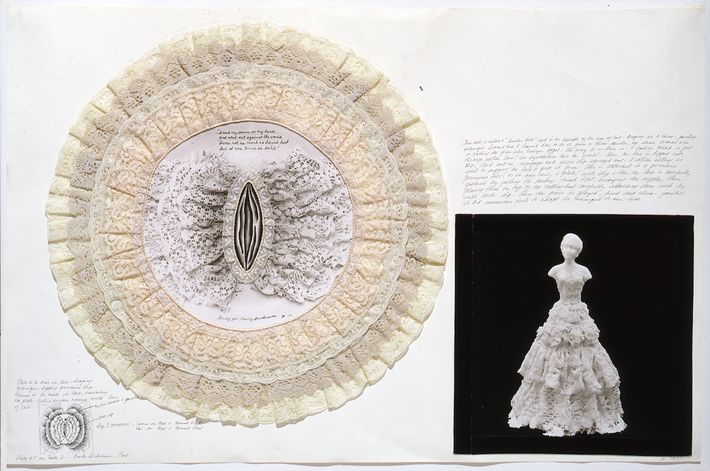 Q&A: Judy Chicago Has a Simple Solution for Art-World Sexism