Raf Simons continues to push fashion into a realm of social commentary it rarely touches. 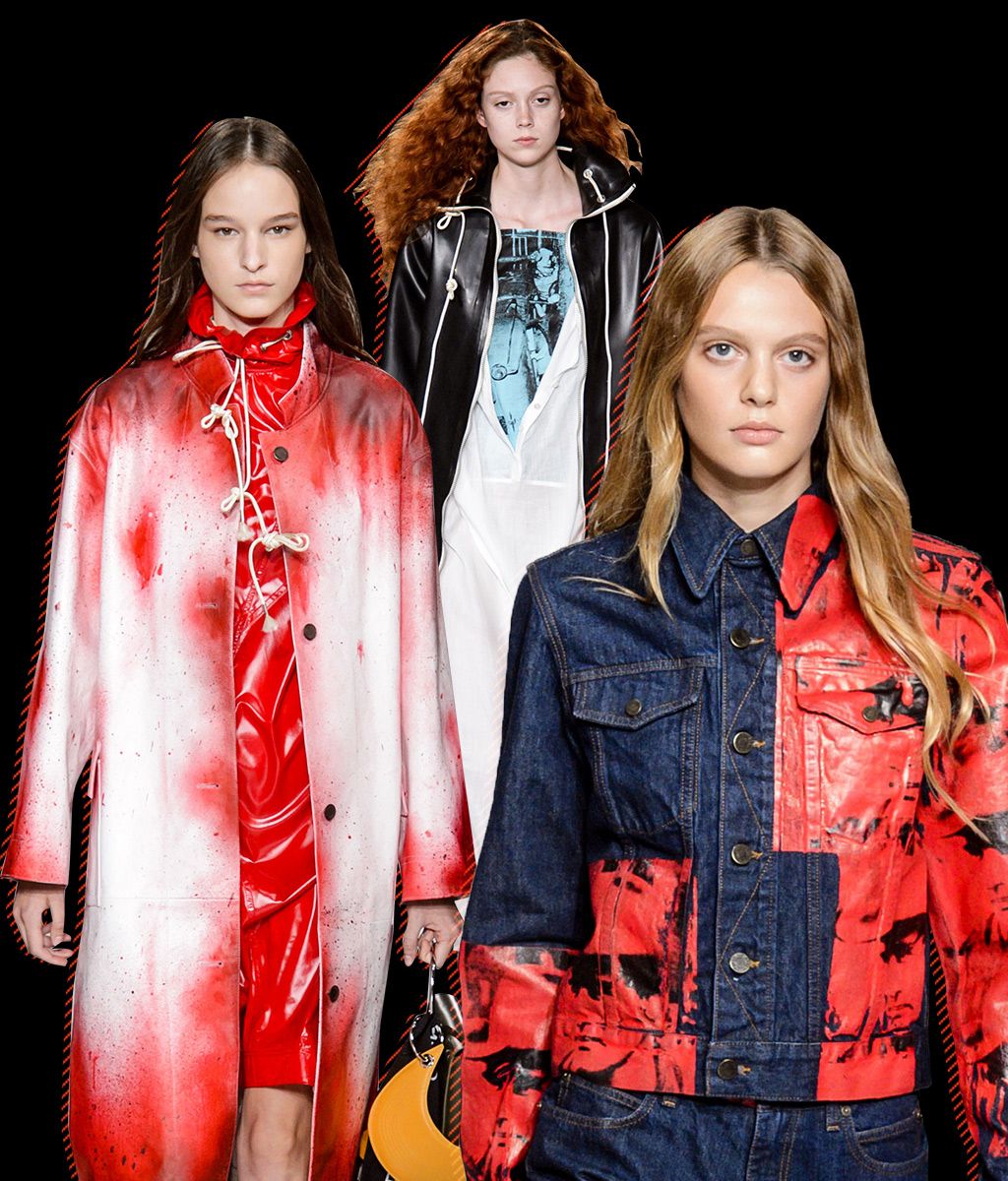 “It’s like an illicit merger,” the artist Sterling Ruby said of the latest Calvin Klein 205W39NYC show, an ode of sorts to American beauty and trauma as depicted in movies and by artists such as Andy Warhol. Ruby spoke as guests swarmed around Raf Simons, the company’s creative officer, to offer the usual backstage hosannas. Ruby, a collaborator on the show, was talking about the way Simons at Calvin is merging art and commerce in order to comment on the dark side of American culture. “Raf is an artist,” he told me. “Very few designers are willing to look at the culture critically and think about it abstractly, and maybe even in a very off-the-hook way.”

This was exemplified in elegant Grace Kelly–style frocks rendered in a material that suggested body bags, the use of Warhol’s car-crash images, and also the cheerleader pom-poms and woodsmen axes that dangled above the audience’s heads — all of which brought archetypal images of American violence into fashion in order to unsettle and provoke. Movies, television, and art have dealt with this type of material for decades, of course, but fashion has been sitting on the sidelines — or, rather, on the red carpet.

For me, the imagery was disturbing, and I had a feeling it was so for others in the audience. Who wants to be confronted with our national obsession with trauma and disaster, in the form of a sweet dress whose pattern was less polka dot than bloody splatter? Or the images of people on a shirt who may or may not have been, well, ax murderers? But I’d rather feel something at a fashion show than be numbed by gingham. So would most people.

The show began rather mildly, with five wholesome-looking examples of the same Western-cut shirt and trousers with cowboy boots. Simons and his design partner, Pieter Mulier, who also worked with him at Dior, introduced the look last season; now they’re using satiny fabrics. Then, things began to get dark as murky plaid coats and trousers came out, followed by the first of what I call the trauma nighties — several sheer white day dresses that resembled nightgowns, some of which were layered over T-shirts with black-and-white photo images. It’s worth noting that Simons has done nighties or smocks before (at Dior). But here the associations were far more interesting. Underneath a spectral nightie, a model wore an aqua-blue T-shirt with a Warhol car-crash image. On top of the whole was a rubbery black car coat. Viewed later, the outfit was a striking composition of textures and tones, with the nice stab of a blood-red handbag in shape of a pom-pom.

From a purely fashion perspective, the collection made several new and notable shifts for Simons — full, below-the-knee skirts (worn with ribbed undershirts or a glossy drawstring shell) and chic dresses based loosely on ’50s couture or, perhaps more accurately, costumes done for movies, mainly Alfred Hitchcock’s. Simons has always used historical couture, but this was a new twist; the shapes have been simplified, while the airy synthetic fabric (in black or deep red) stirred a sense of fear. I guess it’s all those movies we’ve seen of folks leaving the house in garbage bags.

“Fashion is absolutely, absolutely escaping its reality,” Simons told me after the crowd had dispersed. “It’s always trying to be a fantasyland.” While the political conflagration currently enveloping the country was not an explicit element of the show, one couldn’t help but feel that it provides part of the context for the urgency which Simons seems to feel in using this imagery. His first show for Calvin trafficked in similar themes, and Simons apparently plans to continue exploring them — “Yes, it’s just the beginning,” Simons said, adding, “It’s going to take a long time to build up the symbolism” — in an extended manner that would be unprecedented in fashion.

In doing so, Simons is exploiting the tradition of Calvin Klein while also taking it in a new direction. The brand has a long association with visual artists, from Avedon to O’Keeffe, and a franchise for whipping up indignation with its ads, but its fundamental archetype has remained bulletproof: beautiful young people in love. Simons is taking the art associations and the indignation and redirecting them toward American violence. He has an enormous opportunity to make fashion more politically and culturally relevant.

Part of the problem for fashion is the sheer lack of daring talent. Many of the revolutionary thinkers are either over 60 (Prada, Rei Kawakubo) or dead (Lee McQueen), while there’s a dearth of interesting designers in their 20s. It’s time for designers to recognize a kind of responsibility to dig deeply into their culture, especially in America, with its festering racism and homophobia, its toxic political climate, and weird mixture of killers and superheroes.

I loved how Simons and Mulier worked the beauty into the horror, mostly through abstraction, and the confident way they used artistic references. This is their domain, and they know it. But the main feeling I had was that the designers have the whole country in front of them, in all its strange glory. With Calvin Klein 205W39NYC apparently giving them free reign — impressively so, given that it’s a public company owned by the giant PVH — they can do what they want.

Chris Leba, of the up-and-coming label R13, also tapped into American culture, though on a lighter note. The Hutterites inspired his many versions of apron dresses, in faded denim and folksy plaids, and mixed in with punk-style kilts, fuzzy leopard tops, and music-festival T-shirts. Leba, who spent nearly two decades at Ralph Lauren, clearly has a genuine love of American motifs. The show was a bit repetitive, its moments of darkness not as real as Simons’s, but Leba knows how to make individual pieces, like those kilts and aprons, sing on their own.