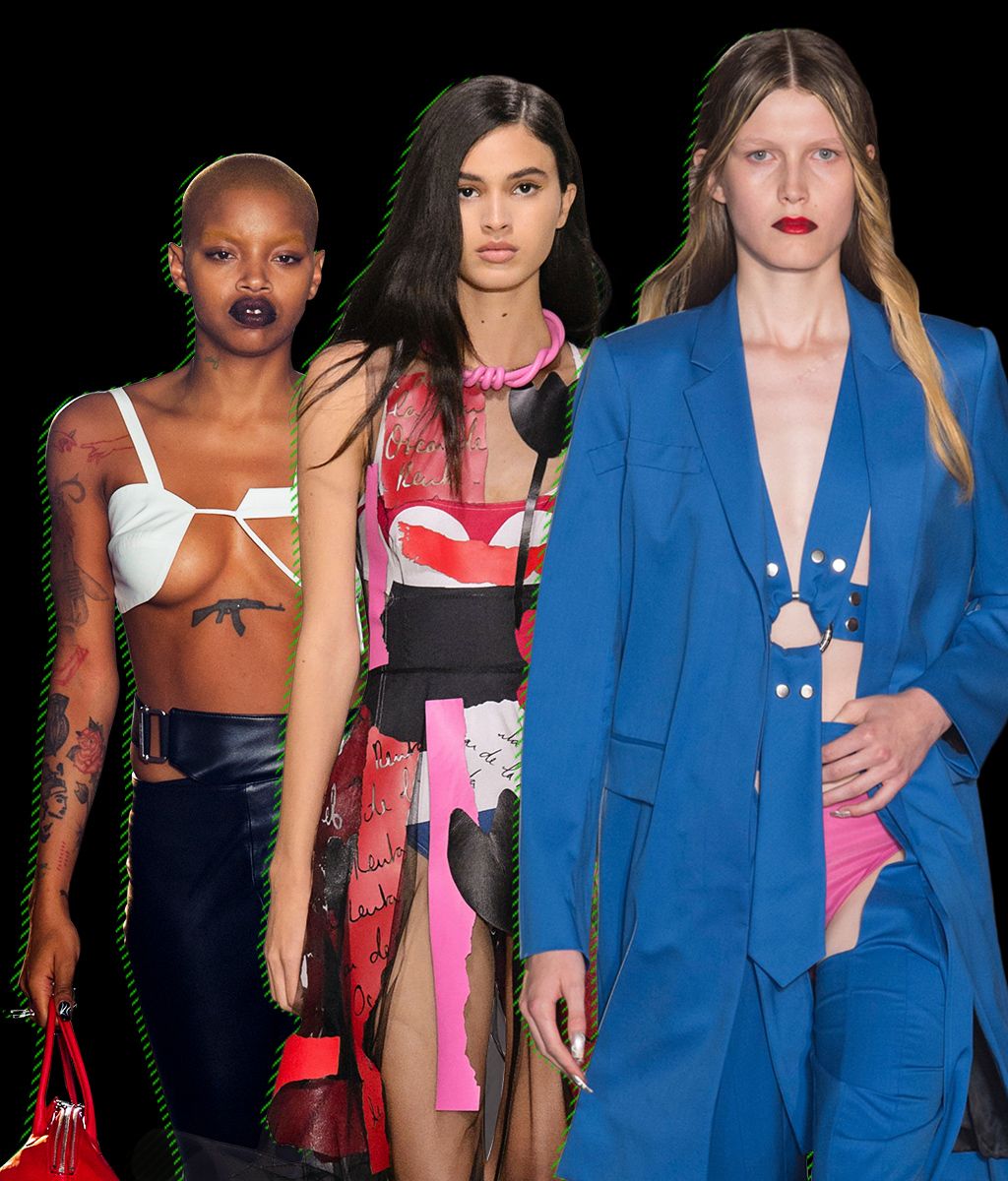 The space for Shayne Oliver’s Helmut Lang show last night in Soho was the former Pearl River Mart on Broadway. You probably bought fish-patterned bowls there for your first apartment, or straw mats for the beach. The sidewalk was flooded with kids — most of whom know Oliver from his Hood by Air label — and the scene inside the block-long store was buzzy. In fact, it recalled other shows in Soho, but from the late ’80s and early ’90s — Marc Jacobs, Isaac Mizrahi’s debut in a loft, maybe a Stephen Sprouse show.

I remember sitting in his office in Vienna around 1997, and asking him about some semi-sheer dresses he had recently done that featured a kind of harness under the top of each dress. It made me think of a bra that had been hiked up above the boobs. Was that it, I asked Lang. He just smiled at me: no answer. I was free to see what I wanted to see.

Today, everything is overly interpreted and instantly consumed — whether it’s a dress or a photo of a destructive hurricane. For me, Oliver’s furious cutting style at Hood by Air, as well his intense, visually assaulting shows, is an attempt to reckon with the feelings that this culture produces, the splintering of historical codes and manners, the bombardment of images, the need to cut through things in order to, well, breathe.

I felt that sensitivity was present in his one-off Helmut Lang collection (which the company calls a “capsule,” though it included more than 50 looks with many accessories). And while one would have no trouble discerning Lang’s style in the trousers, masculine coats, and slinky tops, it was also clear that Oliver, who is 29, didn’t feel a need to pay respectful homage. He slashed into things, almost as if to disembowel the original (or the memory of the original), and he included small-fitting as well as jumbo bras. A white satin one, worn on the outside of a black jacket, seemed to dissolve both its intimacy and gender associations. It was just a starkly blown-up object that you could turn into a rain hat or a tote if you got desperate.

“I wanted to do the energy of Lang, rather than get into his clothes,” Oliver said afterward, adding that he hoped to convey sensuality with a dose of fetishism. Some people will find the sensuality very overdone, as if rendered with a blunt instrument. But, frankly, I’m not sure that Oliver could have handled this concept any differently. It’s how he sees things. He’s also of a generation that’s nervous and twitchy and always present. Lang, by contrast, seemed almost invisible. He certainly strived to be. And he had something — a singular aesthetic — which drew the world to him, and which still does.

Like many designers, Ashley and Mary-Kate Olsen owe a debt to Lang and other minimalists, notably Jil Sander, of the ’90s. (That decade is getting a good workout this week.) For their Row show at the Carlyle, the Olsens added a softness to their terrific fall collection — a long ivory coat that swept over a deep-red chiffon skirt and a beauty in pale-pink wool that dropped off the shoulders and had the brand’s signature extra-long sleeves. It brought to mind Paolo Roversi’s fashion portraits from the ’90s. The colors were fresh, as were crinkly white T-tops with trousers — and ubiquitous white tennis shoes.

After its founder’s death three years ago, Oscar de la Renta has now solidly entered a new phase. Co-designers Laura Kim and Fernando Garcia don’t have to second-guess their decision to leave behind Oscar’s ladylike suiting, tweeds, and big ballgowns, because they showed without a doubt on Monday that their way forward is more in touch with the times — younger and lighter in attitude and fabrics.

In just about every way, this collection (Kim and Garcia’s second) was superb. First, there were airy, slightly oversize blazers in stretch gabardine shown with cropped trousers and an embroidered logo T-shirt. The blazers also worked over beaded cocktail slips, and for a wonderfully streamlined evening suit in black stretch gabardine with a narrow slit skirt. It’s one of the best-looking evening styles of NYFW.

Second, the designers freshened up Oscar’s zesty palette with bright yellow paired with blush pink, red with shocking pink, and carnation pink with a white-cotton mini jumpsuit. They abstracted his handwritten logo and turned it into a broken collage for day dresses and black-net shifts over bathing suits. Finally, they brought the label’s fancy clothes up to date, mostly by relaxing the sense of glamour. The silhouette and craft of an evening dress still reads as de la Renta, but now it’s in delicate layers of bright dip-dyed pink tulle.

breakout 8:00 a.m.
Meet Sally Rooney’s New Leading Lady Alison Oliver auditioned over Zoom. Next thing she knew, she was on set with Joe Alwyn.
celebrity 7:19 a.m.
How Many Weddings Are Kourtney and Travis Going to Have? Kravis got legally married over the weekend.
power Yesterday at 6:02 p.m.
The Normalization of White Male Violence What happened in Buffalo on Saturday is our nation’s natural state. Black anxiety is mine.
By Brittney Cooper

lawsuits Yesterday at 5:38 p.m.
Amber Heard Says She Thought Johnny Depp Would Kill Her Heard also testified that Depp sexually assaulted her with a liquor bottle during a brutal fight.
white supremacy Yesterday at 4:55 p.m.
What Is Replacement Theory? The 18-year-old gunman who opened fire on a Buffalo supermarket was apparently motivated by an old white-supremacist conspiracy.
do i need this Yesterday at 4:04 p.m.
Do You Need the ‘Windex of Skin Care’? The spray has taken up permanent residence in my overflowing beauty closet.
let's talk about breasts Yesterday at 3:35 p.m.
Suddenly I Need Gold Nipple Pasties Thanks to Doja Cat, of course.
fomo Yesterday at 3:29 p.m.
I’m Devastated I Wasn’t Invited to Chloë Sevigny’s Wedding Swan-shaped ice sculptures, mint-julep cups full of cigarettes, and Natasha Lyonne.
celebrity Yesterday at 1:43 p.m.
Kim Is Really Trying to Make Beach Gloves a Thing Kim Kardashian is on the 2022 Sports Illustrated “Swimsuit” issue wearing a nude bikini … and matching opera gloves?
parenting Yesterday at 1:10 p.m.
Formula Is a Lifeline The conversation around the shortage reveals how misunderstood formula feeding remains.
By Erica Schwiegershausen
celebrity Yesterday at 12:49 p.m.
I Really Don’t Need Any More Info About Megan Fox and MGK’s Sex Life This week, they apparently cut a hole in her jumpsuit to have sex.
brooding Yesterday at 12:00 p.m.
What Will It Take for Momfluencers to Speak Up About Abortion Rights? Mommy bloggers have the power to mobilize real political energy — but they rarely do.
celebrity Yesterday at 10:18 a.m.
Someone Sneaked a Phone Into Jesse Williams’s Broadway Debut Nudes from the show — leaked without the actor’s consent — are circulating on Twitter.
book excerpt Yesterday at 10:00 a.m.
How to Call the Whole Thing Off The day after breaking my fiancé’s heart, we attended his best friend’s wedding together. It didn’t go well.
By Alyssa Shelasky
encounter Yesterday at 8:00 a.m.
Would You Time Travel Back to Your Sweet 16? In Emma Straub’s latest, the novelist uses fantasy to revisit the past. It all happened in real life, too.
By Kate Dwyer
how i get it done Yesterday at 7:00 a.m.
How Frieze L.A. and New York Director Christine Messineo Gets It Done She’s the first person to oversee both art fairs and is currently gearing up for New York’s tenth edition.
By Liam Freeman
astrology May 15, 2022
Madame Clairevoyant: Horoscopes for the Week of May 16 It’s Gemini season, but don’t let that scare you. Give the twins a chance.
By Claire Comstock-Gay
sex diaries May 15, 2022
The Woman Wondering If She’s Bisexual Enough to Come Out This week’s sex diary.
culture May 13, 2022
At the New Museum, Faith Ringgold and Women in the Workforce Rebecca Traister, Kimberly Drew, Paola Ramos, and Isolde Brielmaier kicked off a new speaker series from the Cut and the New Museum.
fashion May 13, 2022
Grimes DJs the Apocalypse at Louis Vuitton A billowing metallic dress with a high neckline was a natural starting point for the silhouettes that followed: boxy, oversize, and sculptural.
More Stories