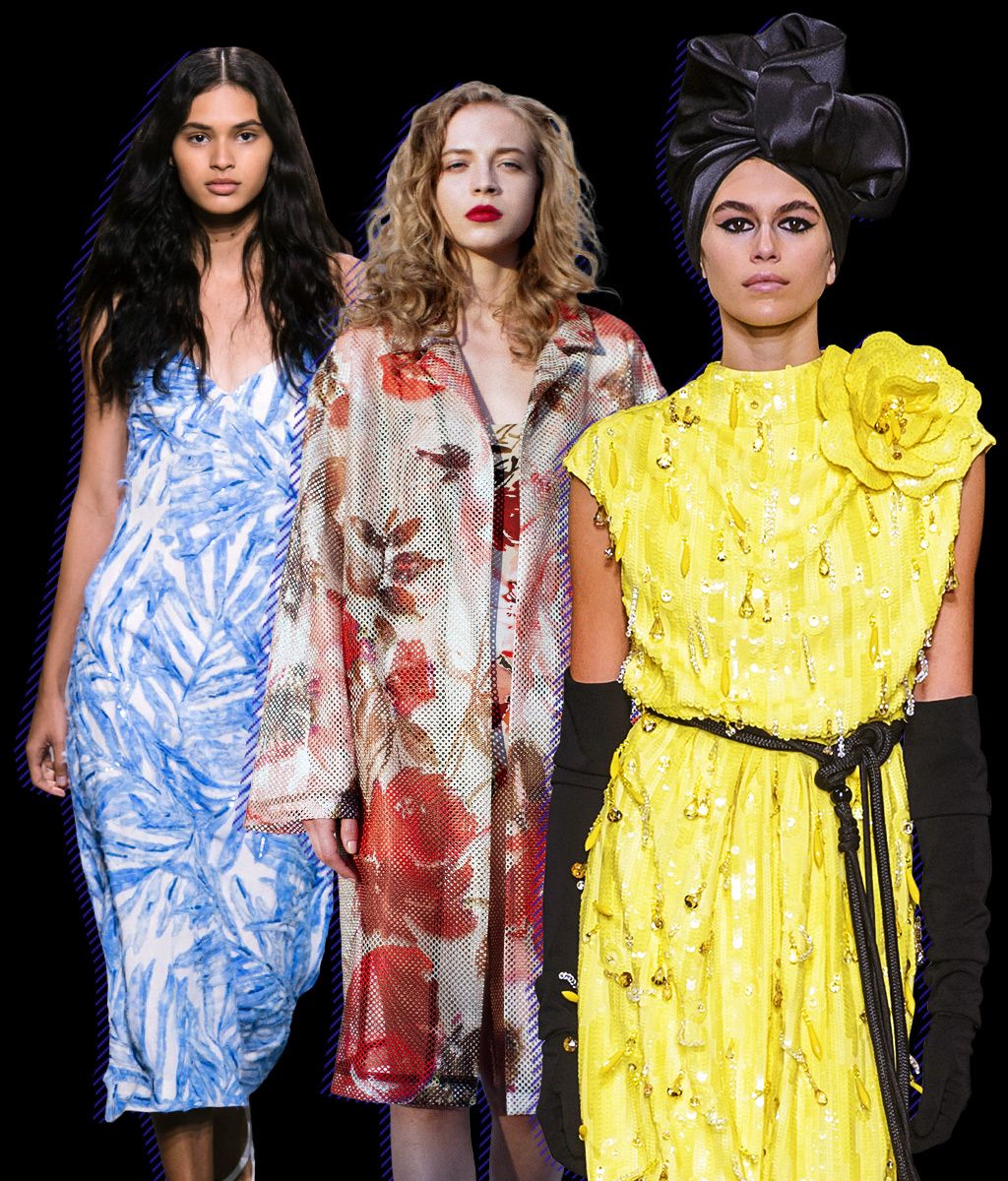 It’s too bad that Marc Jacobs closes New York Fashion Week. His show yesterday at the Park Avenue Armory wasn’t necessarily the best on the spring 2018 bill, but it was the most moving. After nine sprawling days of shows, from Bushwick to Bedford, you were too demented to appreciate the utter beauty of it.

For the second season in a row, Jacobs had cleared the vast floor of the Armory. No set. Guest chairs were pushed to the walls, in a single line, so that the people on the opposite shore seemed very far away indeed. Then, without music, he had the models parade past the audience; and when they had completed a turn, they filed down the center into the front vestibule. Kaia Gerber was the show closer, and the only sound was the swish of her beaded canary-yellow gown and the flutter of photographers’ shutters.

Then, after a pause, the models marched back into the hall as a group and now you heard the most beautiful music: an aria from the Italian opera La Wally, which many people will know from the 1981 French movie Diva. It begins Ebben? Ne andrò lontana. “Well, then? I’ll go far away.”

If a designer were to take his leave from fashion, after 30 years — and there has been chatter that Jacobs wants to leave his company — this would certainly be a lovely, melancholic last act. Jacobs insisted it was not. “What? No!” he said, scowling backstage at the suggestion.

Jacobs, like Saint Laurent, has an incredible way of weaving touchstones of his career into his clothes and sending them back as love notes to his audience. The various turbans worn by the models (created by Stephen Jones) were inspired by Kate Moss’s silvery Jacobs outfit for the 2009 Met Gala. The perfectly arched brows and cat-eyes (by Diane Kendal) could have sprung from a hundred Harper’s Bazaar covers in the Vreeland era, another touchstone. According to the press notes, the collection was “the reimagining of seasons past somewhere beyond the urban landscape of New York City.”

In other words, the show contained a medley of Jacobsian shapes and themes, now cast in sunshine colors, so that a hipster hodgepodge of yellow nylon coat over a fat cowl-necked sweater, and turquoise beaded skirt with pom-pom slides and a fanny pack, surfaced as blissed-out Boca housewife. Piece by piece, the collection was a trove of novelty, from board pants and fresh-looking Turkish trousers in nylon to oversize pantsuits, minis in blown-up Pop-style patterns, and some lovely one-shoulder beaded floral dresses.

As a collection, though, it was perhaps too close to the stereotype of an American lady, a Blanche duBois swallowed up by her clothes and her dreams, oblivious that she’s wearing fur and shower scuffs in the blazing sun while boys and girls in bathing suits sail past. That woman is something of a glorious, unreachable relic, rather like fashion itself so quickly becomes. Does a younger generation relate to Marc’s multilayered references? Perhaps not, and that may be the lament that tugged at the heart of this powerful collection.

The final days of the New York shows saw a spree of good-looking, relaxed American styles, from the camp shirts and gorgeous denim at Derek Lam to the tie-dye and palm prints at Michael Kors. Carolyn Murphy opened his collection in a carnation-pink tie-dyed cashmere sweatshirt with sandals. You get the idea: laid-back, flip-flop luxury.

For my money, the best take on that style came from a relative unknown: Bonnie Young. She actually spent 15 years at Donna Karan, eventually as creative director of collections. A year ago, she started her own high-end label BY, and this season was her strongest, with a long textured chiffon dress (in black or deep red) with a cotton drawstring to release or create volume, a simple long-sleeved dress in mocha cotton with a contrasting cord and pouch pockets, and oversize silk men’s shirts with sharp-looking track pants and ribbed pullovers. Young’s floral patterns (in rose, hydrangea blue) are fresh, and she has a good eye for keeping the oversize and the relaxed from running amok.

power Yesterday at 4:44 p.m.
The Lives They Want You to Forget Anti-choice activists try to erase the patients who need — and benefit from — abortions.
anti-vaxx Yesterday at 2:26 p.m.
Cheryl Hines Condemns Husband RFK Jr.’s Comments About the Holocaust Robert F. Kennedy Jr. brought up Anne Frank during a recent anti-vaxx rally.
couture fashion week Yesterday at 2:18 p.m.
At Couture, Embracing Hard Chic What Daniel Roseberry’s Schiaparelli collection, Maria Grazia Chiuri’s Dior, and Virginie Viard’s Chanel had in common was precision.
By Cathy Horyn
racism Yesterday at 1:41 p.m.
Bravo Fires Jennie Nguyen from The Real Housewives of Salt Lake City “We recognize we failed to take appropriate action once her offensive social media posts were brought to our attention.”
recap Yesterday at 12:29 p.m.
A Bachelor Villain and Her Garlic-Butter Shrimp Shanae takes food fights to the next level.
celebrity Yesterday at 12:07 p.m.
Pop Quiz: Do You Know Who This Man Is? Wheel of Fortune host Pat Sajak recently confessed that he had no idea.
ask a boss Yesterday at 12:00 p.m.
‘I Hate My New Job. Can I Quit Yet?’ Before you make any moves, have a straightforward conversation with your boss.
health Yesterday at 11:00 a.m.
Is the Pain All in My Head? A new treatment called pain-reprocessing therapy promises to cure chronic pain — but maybe not for everyone.
By Eleanor Cummins
celebrity Yesterday at 10:41 a.m.
John Mulaney Has Perfected the Dad Selfie And he posted a picture of Olivia Munn for the first time.
let's makeup Yesterday at 10:35 a.m.
Is Kanye West Doing Makeup Now? He’s partially responsible for at least one of these looks.
By Erica Smith
power Jan. 24, 2022
Evan Rachel Wood Says Marilyn Manson ‘Essentially Raped’ Her On Set In her new documentary, she said Manson penetrated her while filming a 2007 music video.
culture Jan. 24, 2022
And Just Like That … We’re Being Threatened With a Season Two Sources say those involved are “feeling good” about a possible return.
fashion Jan. 24, 2022
Thierry Mugler, Fashion’s Greatest Showman The designer, who died Sunday, was force in ‘80s fashion. A new wave of celebrity fans and a museum retrospective have brought his influence back.
By Matthew Schneier
in memoriam Jan. 24, 2022
13 Out of This World Thierry Mugler Looks From inventive silhouettes to theatrical productions, Mugler’s unique approach to glamour will be celebrated forever.
sorry to this man Jan. 24, 2022
Doubt Taylor Swift’s Songwriting at Your Own Peril One cannot simply insult her skills.
euphoria Jan. 24, 2022
11 Pieces You Can Shop From Euphoria Episode 3 Including Miu Miu, Reformation, Coperni, and By Far.
friendship Jan. 24, 2022
Javier Bardem, Please Plan My Birthday Party Commitment is jumping out of a cake dressed as a Bond girl for Daniel Craig.
valentine's day Jan. 24, 2022
The 16 New Sweethearts Phrases, Ranked The theme is “words of encouragement.” Gross.
culture Jan. 24, 2022
In Euphoria, Sometimes Violence Is the Answer All hail Ashtray.
celebrity couples Jan. 24, 2022
Kanye West and Julia Fox’s Paris Fashion Week Dress-up Tour Featuring a pair of boots we’ve seen on Kim Kardashian West before.
More Stories