Christopher Bollen is a master of a literary subgenre that could be called, to borrow a phrase from Bloomberg Pursuits, “When Bad Things Happen to Rich People.” His new book, The Destroyers (after Orient, a glossy North Fork whodunit) is another beautiful-people-in-a-beautiful-location mystery, but this time it’s the acutely rendered relationships that elevate it to the top of the thriller pack.

At the center of the book are former childhood best friends Charlie and Ian. More than a decade after high school, down-on-his-luck Ian makes a desperate visit to wealthy playboy Charlie on the sun-drenched Greek island of Patmos, where Charlie has been running a yacht business and generally living the high life. After Charlie offers Ian a job at his company, Charlie mysteriously goes missing, and complications, as they say, ensue.

While the details of Charlie and Ian’s relationship may be unique — extreme wealth, Mediterranean islands, #yachtlife — the experience of two friends growing up and apart is not, and it’s in describing this undoing that Bollen achieves some of the book’s most resonant moments. The Cut spoke to the author about his new book, the sticky bonds of childhood, and how his identity as a gay man helps him write about straight people.

Your book centers around one very complicated friendship: Charlie and Ian’s. What’s so complicated about that relationship?
They’re the core of the book: They were childhood best friends, both came from wealth, and then they developed on their own paths. When they get together again [in adulthood], it’s an act of desperation. I think there’s a certain point you get to in your adult life where you spend a lot of time leaving where you’re from and trying to build your own life far away from your parents, and then you get to an age where you wonder what happened to everyone. There’s a sense of nostalgia for the relationships you built when you were a kid — that idea has been at the root of my writing. 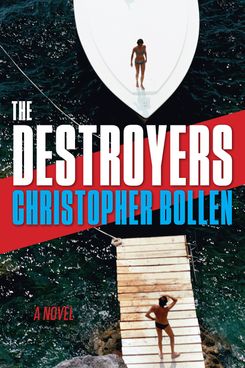 Do you think that our childhood friends know us the best?
The funny thing is I don’t have a lot of male friends [from childhood] that I’ve stayed friends with, even though I went to an all-boys’ school. I think it has a lot to do with being gay, actually. I think that something happens to you around 12 or 13, or maybe even earlier, where you sort of start to, as a gay kid, keep things to yourself.

Your childhood friends know a lot about you, and they know your biography. But do they know what you’ve become? Your friendships you have built on your own, divorced from your family, are a very different sort. [Adult friends], they kind of know you better because they know what you’ve made on your own. But yet, childhood friends have a weird, weird power over you, because they can see exactly where you started and where you are now. They can trace the trajectory, and that can be really scary. [In New York], it’s always so weird when you have a friend visit you from grade school and it’s this reality check where you’re forced into having your whole [background], in my case Cincinnati, pulled over into Manhattan. And suddenly you kind of feel like there’s this total disconnection between your childhood life and your adult life.

Like all the worlds colliding.
Yeah, and you always feel like you want to show off, but you also don’t want to feel like you’re showing off, because you want to still be that person from the past, but you desperately don’t want to be that person from the past. I think there’s the age you get to where your own family starts to die or disappear and you kind of reach a moment of your own mortality. And you realize that all you kind of have against the darkness is your own friends.

How do you think your identity as a gay man shaped how you wrote about this straight male friendship in your book?
My first instinct was to make the main character gay, because that is exciting and interesting to me, but I didn’t do that, because I was actually worried that it would become like a classic gay-man-obsessed-with-a-straight-man-who-has-it-all story. And that’s actually what I didn’t want to write. So I had to make Ian straight. I could’ve made Charlie gay, actually. That would’ve been interesting. But that would’ve been a character that was too fraught to begin with. I wanted to literally make these characters unfraught. I wanted to have them have really easy early lives. Just to see how they functioned.

Are there different qualities that you think two straight men bring to friendship as opposed to two gay men?
I think that gay men interact with each other differently than straight men. I think there are different ways of speaking or touching even, or body contact or body language. I do believe there’s a lot of homoeroticism in straight male culture, from locker rooms to sports activities. That’s just built in. And so someone’s gonna read the book and say, “Oh, they’re secretly gay.” But they’re not. I think if you look at any straight male relationship, there is a certain sexualizing.

As a gay man, or, in America, you learn so much about heterosexual relationships. You actually become kind of an expert in them. I mean, you see them because you are not privy to them, but you have watched them so carefully. And in fact, some of the best writers about heterosexual relationships, from E.M. Forster to Tennessee Williams, are gay men. It’s like a minor in heterosexuality. That’s a plus to being a gay writer. I think maybe a straight writer would have, arguably, a little less confidence about writing about gay relationships, but they shouldn’t.

As a writer, what’s the allure of the complicated character?
I feel like we’ve done a half-century of straight American marriages in the suburbs in novels. And it’s not to say that there aren’t writers who are coming up with new ways to complicate or write about it in beautiful and interesting ways. But it has been kind of done to death. For me, it doesn’t seem that interesting. I’m much more interested in the extremes of relationships, whether it’s sexual or financial. I think that the journalist’s job is to undo the knots, and to clean and clarify. I think that the novelist’s goal is to tighten the knots and see where they strike against other knots and tangle.

Carolyn Murnick is the author of The Hot One: A Memoir of Friendship, Sex, and Murder.

Does Anyone Know You Better Than Your Childhood Best Friend?

celebrity weddings 10 mins ago
Bennifer Is Getting Married (Again) The follow-up party to their small Vegas wedding is happening this weekend in Georgia.
celebrity 5:13 p.m.
Bella Hadid Isn’t Afraid to Speak Out About Palestine Anymore The model said many companies have stopped working with her following her advocacy.
hairy situations 5:00 p.m.
The Best Dandruff Shampoos for Every Kind of Hair From curls to color-treated.
By Asia Milia Ware, The Cut, and Chinea Rodriguez
wtf 1:38 p.m.
Bryce Dallas Howard Confirms Huge Pay Disparity on Jurassic World “I was paid so much less than the reports even said.”
celebrity 12:46 p.m.
Adele Says She ‘Might As Well Be Married’ to Rich Paul “I’m not engaged. I just love high-end jewelry, boy!”
cut covers 12:08 p.m.
Amandla, Amandla, Amandla The Bodies Bodies Bodies star is the Cut’s July-August 2022 cover star.
By the Cut
gross! 11:56 a.m.
Who Told the GOP About ‘BDE’? A gubernatorial candidate claims Ron DeSantis has it. Of course he doesn’t.
obits 10:04 a.m.
Anne Heche Has Died at 53 The actor suffered severe injuries after a car crash in L.A. earlier this month.
flying high 10:00 a.m.
The Ultimate Celebrity Perk? Climate Disaster. The Twitter account @celebjets gives us insight into Kylie Jenner’s 17-minute flights.
power 10:00 a.m.
Everything to Know About the WNBA Star in Russian Custody Amid ongoing prisoner-swap negotiations between the U.S. and Russia, Brittney Griner’s legal team has appealed her conviction.
garment district 8:00 a.m.
How to Be a Fashion Designer: Sewing Not Required Oluwole Olosunde’s curriculum offers a wide-ranging crash course on the fundamentals of building a brand in the Instagram era.
how i get it done 7:00 a.m.
How Kerry Washington Gets It Done “I’m not good at compartmentalizing and only bringing part of myself into a room.”
By Faith Cummings
astrology Yesterday at 8:30 p.m.
Madame Clairevoyant: Horoscopes for the Week of August 15 As Mars enters mercurial Gemini, you may find yourself easily distracted. Fighting it will only make it worse.
By Claire Comstock-Gay
sex diaries Yesterday at 8:00 p.m.
The Artist Who’s Not Sure She Loves Her Comedian Boyfriend This week’s sex diary.
r. kelly Yesterday at 5:47 p.m.
R. Kelly Denies One of His Alleged Victims Is Pregnant With His Child After identifying herself as the singer’s fiancée, Joycelyn Savage claimed she’s pregnant with his child.
rip Yesterday at 3:51 p.m.
Freya the Walrus Was Too Good for This World The summer icon has been euthanized by Norwegian officials.
rust Yesterday at 1:40 p.m.
Everything We Know About the Rust Shooting An FBI report concludes that the trigger must have been pulled.
shopping Aug. 12, 2022
The $6 Brow Product That Changed My Eyebrows It took me almost a decade to find the perfect brow product.
fashion Aug. 12, 2022
Julia Fox Is Back! And she is giving us the latex looks we’ve been so thirsty for.
feminism Aug. 12, 2022
Who Actually Lost the Sex Wars? And were there any winners? A conversation with Christine Emba, Nona Willis-Aronowitz, and Lorna Bracewell.
More Stories