Alexander Wang is no stranger to spectacle, and this season, just one runway show wasn’t enough for him. The designer surprised the Nolita crowds with a spring/summer 2018 show outside La Esquina taqueria earlier this evening, then moved his models to Brooklyn for a runway show slated to begin at 9:30 p.m. Below, here’s how the traveling circus known as WangFest unfolded throughout the night.

The first 100 people to line up at the Alexander Wang NYC flagship store tomorrow morning (Saturday, September 9) will receive a wristband to attend Saturday night's #WANGSS18 #WANGFEST. Store opens at 11am EST. Must show valid ID. ... Follow along on ALEXANDERWANG.COM from 7.30pm EST.

WangFest began this morning outside the Alexander Wang store in Soho, where the brand gave ticket wristbands to 100 lucky fans. The giveaway started at 11:00 a.m., though people were camped out long before then.

Hours later, Lafayette Street in Nolita was home to a mysterious installation: The sidewalk was barricaded, a black van marked #WANGFEST blocked off an intersection, and trucks drove by with lighting equipment. Wang’s cast hung out nearby in party buses, captured on a livestream as video-esque surveillance footage. 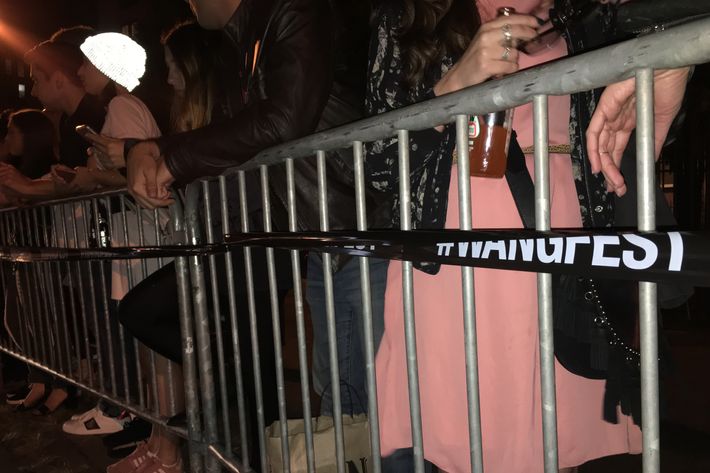 Harley Davidson motorcycles roared down the street, and then all became clear: The first runway was right here, on Lafayette Street. Kaia Gerber opened the show in a tight white dress, followed by Suki Waterhouse. Models paraded by in mostly black-and-white outfits, with some military green thrown in. Kendall Jenner, Bella Hadid, and other models wore festive headpieces — like a New Year’s Eve crown, but for WangFest. Here’s Kendall:

The show closed with Wang triumphantly running down the street while models climbed out of one party bus and directly into another. Next stop: Bushwick, Brooklyn.

Across the river, Kim Kardashian and mom Kris Jenner waited to see Kendall and her party hat. Like other VIPS at the show, including Sofia Richie, Pom Klementieff, Natasha Poly, and Presley Gerber, they were treated to Shake Shack while they waited for the buses to arrive. (The rest of the crowd, sadly, went burgerless.)

Finally, the show began. Like in Nolita, trucks filled with lights pulled in first. Kaia Gerber opened again, making it technically her third runway opening. And models in the same cycle of looks strutted out of one party bus, down the runway, and into another. To see the whole show, watch the video below, and stay tuned to find out what happened at the afterparty — because after all, WangFest isn’t over until the last party guest goes home.

do i need this? 6 mins ago
Do I Need Lori Harvey’s Gym Outfit? I couldn’t get with Pilates, but this I can do.
breakups 12:35 p.m.
Michelle Branch Announces Her Separation From Black Keys’ Patrick Carney Branch was arrested for misdemeanor domestic assault shortly after the announcement.
selling sunset 11:35 a.m.
Looks Like Jason Oppenheim Has Also Moved On Surprise: His new girlfriend isn’t an O Group agent.
celebrity 11:15 a.m.
Kim Kardashian Bravely Takes Shot On-Camera Behold, the face of someone who’s made a huge mistake.
extremely online 11:09 a.m.
I Can’t Shut Up About This Photo of Austin Butler’s Girlfriends Vanessa Hudgens and Kaia Gerber met each other long before they both dated Butler.
5 questions with... 11:09 a.m.
Chanté Adams Is Redefining A League of Their Own The star hits a home run in Prime Video’s new series.
parties! 10:46 a.m.
Beyoncé, Remi Bader, and More of the Bestest Party Pics This Week Celebrating the release of Renaissance, the launch of the Remi x Revolve collab, and more.
seeing someone 8:00 a.m.
Help! Both Women I’m Seeing Want to Be Instagram Official You don’t have to “launch” a relationship if you don’t want to.
By Randa Sakallah
accidents Yesterday at 8:05 p.m.
Anne Heche in a Coma, Under DUI Investigation, Following Car Crash According to a representative, she has remained in a coma since shortly after the accident.
style Yesterday at 7:01 p.m.
Hey Fashion Friend: How Do I Wear Fashion Cargo Pants? We provide you with 15 non-ironic pairs to go with your tiny shirts.
ugh why Yesterday at 4:16 p.m.
Britney’s Lawyer Has Some Words for Kevin Federline “Britney Spears is a brilliantly talented, extremely hardworking icon … The same, unfortunately, cannot be said about Mr. Federline.”
sigh Yesterday at 4:00 p.m.
Male Actor Doesn’t See the Point of Intimacy Coordinators Emma Thompson and Kumail Nanjiani disagree.
5 questions with... Yesterday at 3:27 p.m.
Gugu Mbatha-Raw Takes on the Neo-Noir In Surface, she plays an amnesiac trying to uncover her truth.
wtf Yesterday at 2:42 p.m.
Watch Kathy Hilton Learn Lizzo Is Not Gabourey Sidibe It’s as cringe as it sounds.
panties we love Yesterday at 1:00 p.m.
Kim Kardashian on How She Made Her Skims Underwear A deep dive with Kardashian on what makes Skims panties so special. (Hint: It’s the fit.)
underneath your clothes Yesterday at 1:00 p.m.
The Best Backless Bras for Every Cup Size From plunging necklines to nipple covers and boob tape, there’s one for every outfit.
By Leora Herman
millie bobby brown Yesterday at 12:38 p.m.
Millie Bobby Brown Opens Up About ‘Unhealthy’ Relationship With Hunter Echo She says she felt “out of control and powerless” after the TikTok star claimed to have groomed her as a minor.
obsessive tester Yesterday at 11:06 a.m.
The Absolute Best Mascaras of All Time For every budget and need.
parenting Yesterday at 11:00 a.m.
My Queer Family vs. the Supreme Court If SCOTUS comes for marriage equality next, will I still be considered my son’s mother?
By Michelle Tea
allegations Yesterday at 10:21 a.m.
Unpacking the Allegations Against Ezra Miller Vermont police are unable to locate a woman and her three children who were living at Miller’s farm earlier this summer.
More Stories