Monse and Brandon Maxwell show how crucial it is. Plus: Jeremy Scott’s 20th anniversary. 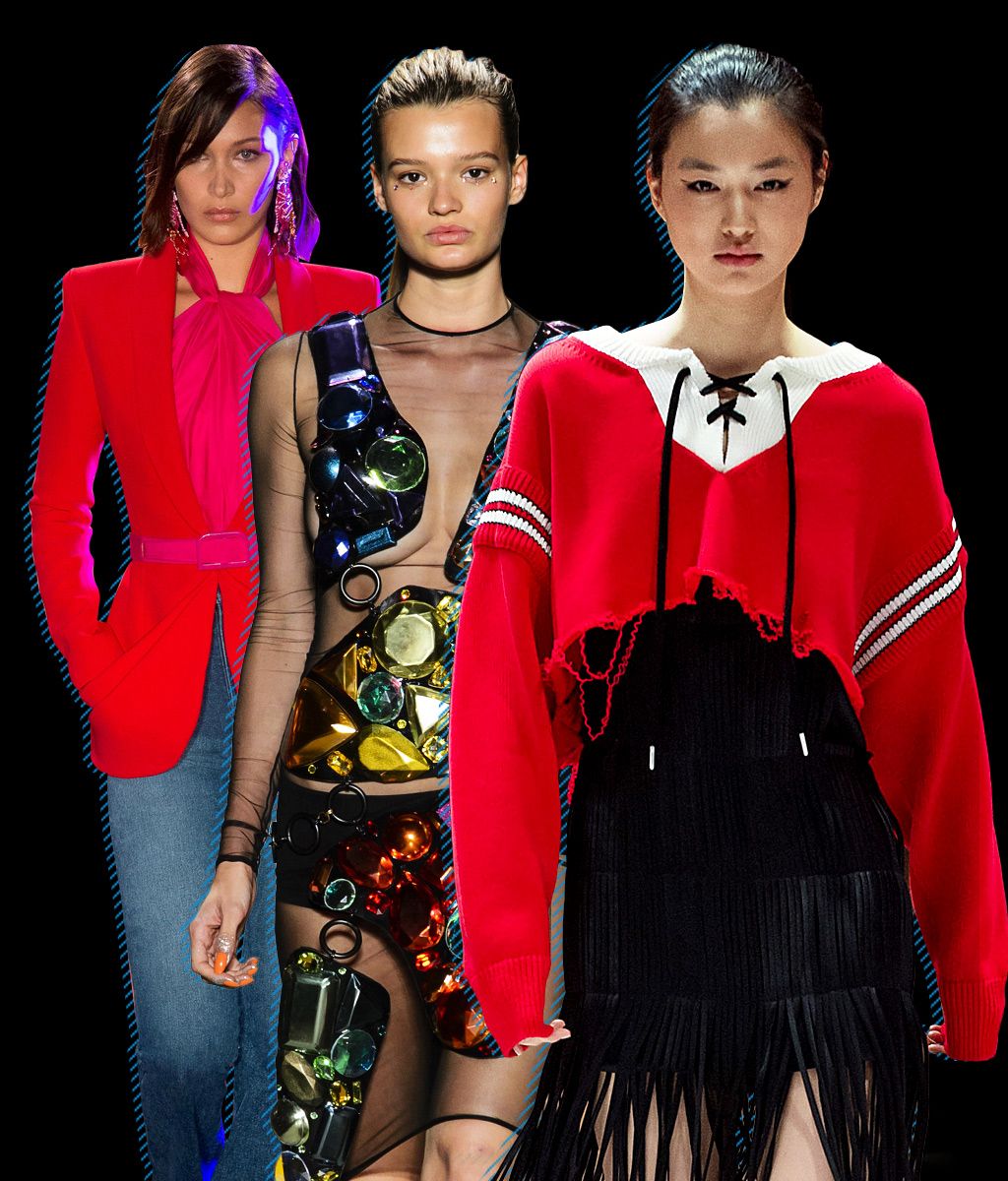 Until the internet age, fashion designers basically fell into two groups: establishment and avant-garde. In New York, the establishment covered everyone from Bill Blass and Calvin Klein to the names who emerged in the late ’80s, like Isaac Mizrahi, Todd Oldham and Marc Jacobs. Whether downtown or uptown, they were all interested in appealing to a sophisticated woman with money. Getting into Vogue mattered, too. And though the avant-garde found it easier to thrive in Paris, there were always a few daring souls here — Susan Cianciolo and Miguel Adrover spring first to mind.

Today, however, the divide has been obliterated. There are so many distinct style tribes that nobody would bother trying to identify them. At the same time, there’s been an enormous amount of cross-fertilizing among various groups, so you get casual nudity at Tom Ford as readily as you get it from an obscure label like Linder, where yesterday we saw thongs with a convenient pube patch and actual garments printed with handguns (and, frankly, not much else worth mentioning).

There are still designers, like Fernando Garcia and Laura Kim at Monse and Brandon Maxwell, who want to reach that high-end woman. But because the stylistic map has become so scrambled, with brands fighting for every inch of space and mindshare, and because they have to compete with cheaper labels that blithely knock them off (as Kim and Garcia know from their popular twisted shirts), the challenge is to make sure that every garment speaks to their particular aesthetic.

Case in point: jeans, which everyone is doing at the moment. Garcia and Kim (who are also co-creative directors at Oscar de la Renta) staged their spring show in an indoor basketball court in Hudson Yards, with a big American university element — a varsity-letter top, luxury knitwear mimicking schlumpy sweatshirts, and ripped jeans with beautifully tailored jackets in a tattersall check. Obviously lots of women, regardless of income or taste, wear jeans with a good jacket and a pair of heels. But, from polished designers like these two, the style seemed more a concession to a monster trend than a true design direction. How many more ripped boyfriend jeans do we need?

Garcia and Kim can’t afford to miss any opportunity to brand their aesthetic, and I don’t mean by sticking an M on a sweater, though it was cute enough. Now that they’ve established a look with their twisted, bare-shoulder dresses and shirts — the best this season were in random-width silk stripes for casual evening — they have to work harder to bring the other elements in line with their vision.

Brandon Maxwell managed to do just that, this season at least. The Texas-born designer, who is 32, wants to do uptown clothes in the old-school sense — that is, ultra-feminine suits, glamorous cocktail dresses, and lavish ballgowns. His show venues also have a throwback appeal; this time it was Doubles, the social club on Fifth Avenue. But the clothes, while perfectly nice, have not been particularly interesting. So it was a surprise to find myself so completely seduced by how simply and convincingly Maxwell has relaxed the attitude of his designs without sacrificing his sense of glamour.

Like Monse, Maxwell opened his show with a fitted pale-pink jacket with jeans, except his were cut as sharply as everything else, and probably worth every penny he’ll charge. Underneath the jackets were draped halter-neck blouses, a style he repeated for slim belted day dresses — and one of the most flattering a woman can wear. A pantsuit in white silk cloque, with a matching crepe top, was consistent with the silhouette of the denim looks, if dressier. The palette was confined to neutrals (including the denim) with pops of red, royal blue, and sunny yellow, and micro-pleating and soft draping in lieu of embellishment.

Sitting on a velvet banquette, watching Gigi and Karlie snake around the room, I felt drugged. And I realized it was just because Maxwell had repackaged the dream of the glamorous woman, with her long legs and stilettos and lettuce-fed body, with a few minimal but relevant gestures, namely the sleek jeans and the soft necklines. Yet the dreamer from Texas hadn’t fundamentally changed who he was.

Before Jeremy Scott’s 20th-anniversary show last night, Michelle Stein of the Italian fashion company Aeffe, which produces Alberta Ferretti and Moschino (Scott’s other hat), recalled that the designer had once been her intern.

“Now you work for Jeremy,” I said. Stein laughed.

In a sense, much of the industry rows for Scott, who was in the vanguard of athleisure, cartoonish prints, and celebrity show-walkers way before they were trends. I rather thought he’d do more of a blowout for his 20th but the show was solid, with new camouflage-print and sweatshirt looks, a blitz of top models, including former stars Liberty Ross and Coco Rocha, and a finale of deliciously silly rock dresses — that is, big fake colored stones hinged together and worn like tribal regalia over sheer, black undies.

life after roe 12:39 a.m.
‘Get in the Streets and Stay in the Streets!’ Abortion-rights protesters channel their rage in Washington Square Park.
By Sarah Jones
life after roe Yesterday at 7:01 p.m.
Overturning Roe Is Just the Beginning Conservatives are already floating a national abortion ban and the overthrow of other privacy-based rights.
self Yesterday at 6:36 p.m.
Eating Daily Harvest Lentil Crumbles Sent Them To The ER Daily Harvest customers describe the medical hell that followed eating French Lentil + Leek Crumbles.
abortion Yesterday at 6:00 p.m.
Celebrities, Activists, and Politicians React to the End of Roe The Supreme Court’s Dobbs decision has, as expected, overturned our constitutional right to abortion.
life after roe Yesterday at 5:30 p.m.
What to Know About Stocking Up on the Abortion Pill Even if you aren’t pregnant, some providers will let you buy the medication in advance.
life after roe Yesterday at 4:49 p.m.
God Help My Friendship With White Evangelicals After Dobbs Forced reproduction cannot mean anything other than slavery to Black women.
By Brittney Cooper
life after roe Yesterday at 3:58 p.m.
The Necessity of Hope Things are bad. They will get worse. But despair has never been an option.
By Rebecca Traister
life after roe Yesterday at 3:57 p.m.
With Roe Gone, This Abortion Clinic Is Running Out of Time “We were all just crying and angry. Then the phone rang and I had to make an appointment with a patient.”
life after roe Yesterday at 1:34 p.m.
How to Protest for Abortion Rights Following the SCOTUS Dobbs decision overturning Roe v. Wade, demonstrators are making their voices heard.
abortion Yesterday at 1:08 p.m.
The End of Abortion As We Knew It In a 6–3 decision, the Supreme Court has ruled to overturn Roe v. Wade.
By Irin Carmon
the internet Yesterday at 12:00 p.m.
Can a PDF Really Tell You If You’re Queer? Unpacking the complicated legacy — and history — of The Lesbian Masterdoc.
By Michelle Santiago Cortés
life after roe Yesterday at 11:16 a.m.
‘A Woman Has No Rights’: Read Liberals’ Supreme Court Abortion Dissent Justices Breyer, Sotomayor, and Kagan decried the abolition of Roe v. Wade in blistering language.
life after roe Yesterday at 10:55 a.m.
Find an Abortion An exhaustive guide to the clinics still open in each state, how to reach them, and the services they offer.
By the Cut
abortion Yesterday at 10:44 a.m.
Life After Roe Starts Now The Supreme Court decision ensures a health-care crisis that will ripple out across the country.
By Claire Lampen
power Yesterday at 10:30 a.m.
Donate to an Abortion Fund Right Now If you’re terrified about the overturning of Roe v. Wade, it’s the best thing you can do.
By Bridget Read and Claire Lampen
style Yesterday at 8:00 a.m.
The Rise of Fashion’s Tumblr Generation They found themselves, and each other, online.
keeping up with the royals June 23, 2022
Prince William and Kate Middleton’s Portrait Is Making Me Uncomfortable Sex and the City shoes included.
allegations June 23, 2022
All the Allegations Against Ezra Miller A man claims Miller is housing his young children and their mother in unsafe conditions.
good boys June 23, 2022
Congratulations to These Wrinkles Trumpet the bloodhound is the first of his breed to win Best in Show.
public health June 23, 2022
The FDA Just Changed Vape Life for Good R.I.P. Juul — for now.
More Stories