The Memory of Fashion 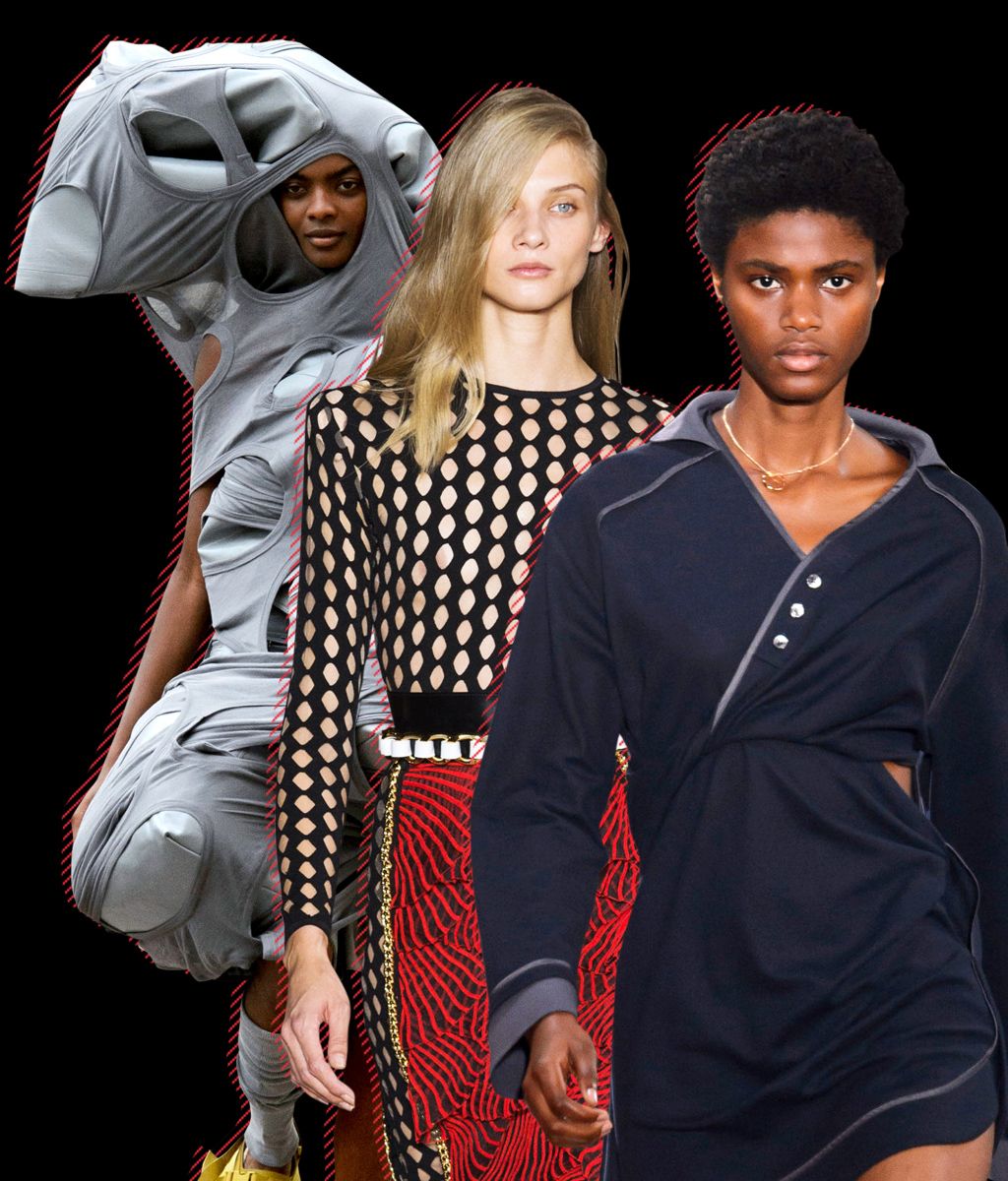 Yesterday at the Paris shows, quite a few designers were thinking of the stuff we carry with us, mental and otherwise. Olivier Rousteing based his ruffly Balmain show on a childhood recollection of a visit to the Opera Garnier, which was also the site of the presentation. Antonin Tron, of the new label Atlein, called his group of sharp, cotton-twill tailoring and easy jersey dresses “Memories.” 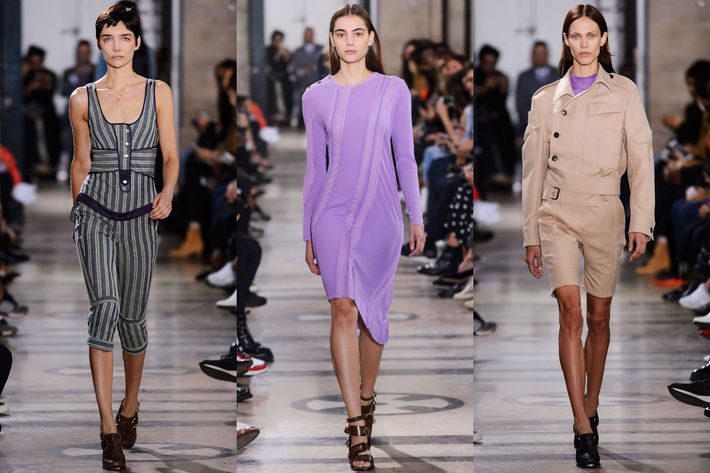 And Rick Owens set his outdoor show against the giant walls of the Palais de Tokyo, with their carved murals of classical figures and statues surrounding a pool whose fountains produced jets of water and mist. Leave it to the ever-imaginative Owens not to bore us with a private yet ultimately commonplace memory but, instead, to remind us that Parisian fashion, like the city itself, is built on layers and layers of history. The Palais de Tokyo was built for the International Exposition of 1937 as an example of modern architecture, and it’s now a contemporary art center. According to the museum’s website, the basement was used during World War II to house property taken from French Jews, who were sent to concentration camps.

I only found out this information later, and Owens didn’t reply to an email asking whether he was aware of the building’s history. But knowing his work, it wouldn’t seem a total accident that he had chosen that space to present a collection that included elements of traditional haute couture — almost fragments — as well as a number of pieces that looked as if the models were carrying bundles on their bodies. The bundles were positioned randomly, and then a web of stretch material (like a big undershirt) was pulled over them.

But the sense of people carrying their belongings, almost becoming one with them, was unmistakable. In one of the final garments, I noticed the curlicue scrap of a ruff (in the 16th-century style) tucked between the bundles, like something saved, or as a mark of nobility asserting itself through the bumps and lumps. The Surrealists were great ones for making jokes out of once-fashionable objects, but their methods of incongruous juxtaposition have become too commonplace for something like Owens’s ruffs to shock — which doesn’t make them any less brilliant.

At this stage of his career, I think Owens is striving for a deeper emotional connection with his audience, and to refine his abstract handling of traditional shapes and techniques. Lots of contemporary designers have alluded to mid-century haute couture — most recently Jack McCollough and Lazaro Hernandez of Proenza Schouler in their July show — and the 18th century, notably John Galliano and Raf Simons. Yohji Yamamoto once did a brilliant show at the Opera that was a kind of Paris dream. But Owens’s strength is to dissolve the original form, or at least reduce it to the merest trace.

In yesterday’s show, there were elements of stoles and drapery. A papery fabric suggested to me a dressmaking toile, a pair of evening gloves seemed the inspiration for a single detached sleeve that dangled past the fingertips. At the front of several garments were puffy fanny packs in the same material as the outfit. Formerly a bustle, now yanked to the front? 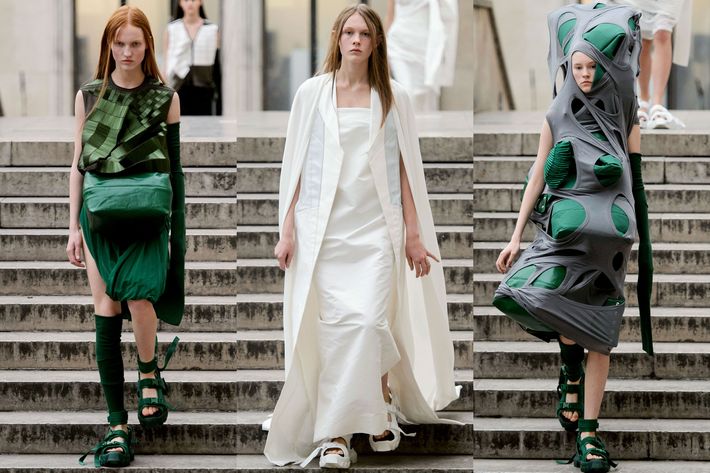 Maybe. The brilliance of the show was in the airy, ethereal shapes (all grounded on chunky Teva-like sandals), and the fact that the forms were open to interpretation. One of the shorter dresses, with a shoulder pulled sharply one way and the front pillowing out, made me think the inspiration was a plastic shopping sack floating down an urban sidewalk, as it suddenly and magically fills with air. Could have been.

All the complexity in Rousteing’s clothes is on the surface — in the chain straps of Natalia Vodianova’s shiny black overalls, in the fat rhinestones studding leather pants, in the stiff ruffles mobbing the models’ ankles and knees. Although Rousteing said the collection was based on his first impression of the Opera and Paris as a 10-year-old kid, and his ambition to become a designer, the clothes didn’t depart from what he has done in recent years. There was no reckoning, in other words, with the dream — the way, say, that Yamamoto did. What more do I know about myself? How do I feel now about this city? Instead, Rousteing piled on the fringe and squeezed the ruffles tighter. The real question for him is not whether he got what he wanted — obviously he did — but whether he can keep adapting Balmain’s rather hard sexiness over the next ten years. 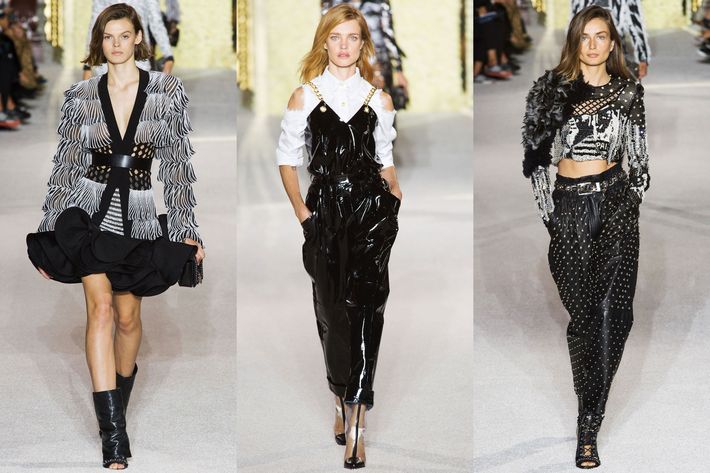 I loved Natacha Ramsay-Levi’s first foray as Chloé’s new creative director. Founded in the ’50s by Gaby Aghion — she showed an early prêt-à-porter collection over breakfast at the Café de Flore! — Chloé has been synonymous with French-bohemian style through a string of guardians, including Phoebe Philo and Clare Waight Keller, who left this year for Givenchy. 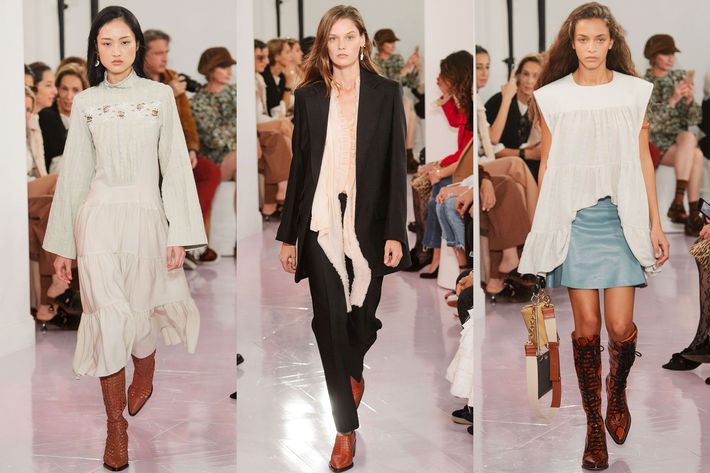 What I like about Ramsay-Levi’s clothes is that they seem knowingly connected to the way lots of young women want to dress. They’re feminine but not prissy or romantic. There’s a masculinity that’s barely detectable but nonetheless present — in the stiff leather of a miniskirt, say, or the strictness of a black pantsuit worn with a pale pink camisole that frilled in the front. Her silhouette looked cool, especially with an olive, ribbed-knit top with discreet spangles over a matching mini, and simple dresses in a dusty, antique palette for silk-crepe floral prints. And Ramsay-Levi knows how to get the most out of traditional handwork, like embroidery and punched cotton-front Victorian blouses, without killing the modern bohemia of the clothes.

The Memory of Fashion