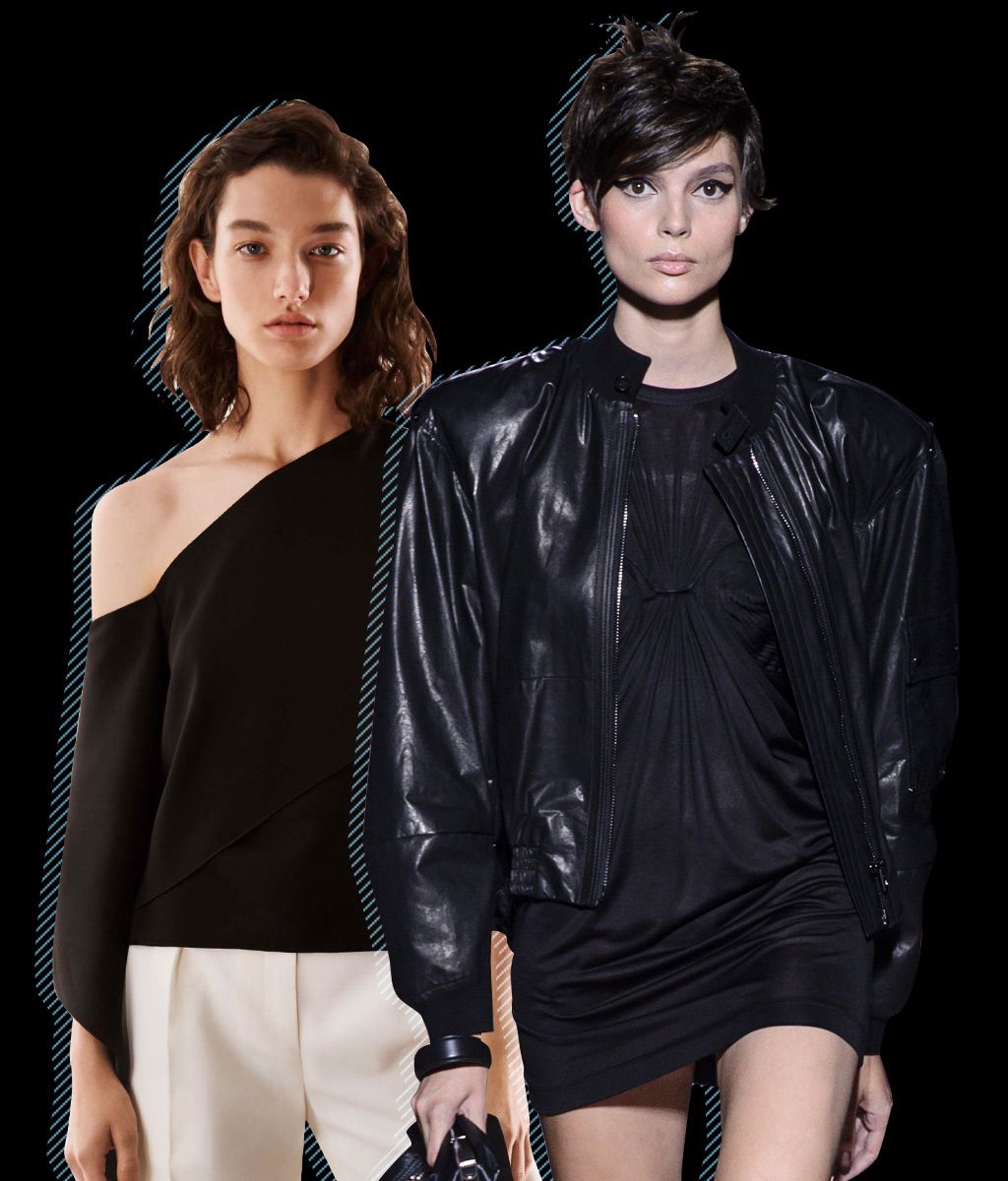 A designer who names his fragrance Fucking Fabulous and hosts a party where the male servers are dressed in boxers is not subtle. And we have no right to expect subtlety from Tom Ford. This is the man who put a boner in a Gucci ad, furred his runway in sex-pad shag, and invokes Halstonian decadence with every plunging neckline. Last night, at the Park Avenue Armory — awash in pink carpeting and lighting and the hardy glow of celebrities like Kim Kardashian West and Chaka Khan, who waved her Chaka-decorated fan throughout the show — the necklines of Ford’s bodysuits were cut so low they looked primed for sweaty dancing. Or Chaka’s big fan.

A year ago, Ford made the leap, along with Ralph Lauren and a few others, to selling his collections immediately after they’re shown on runways, since people apparently want to be able to buy things the moment they see them. My problem with that show was that Ford’s normal sense of creativity and urgency felt compromised by the need for every piece to be commercially right. Ford has a long history of commercial hits, starting at Gucci in the mid-1990s, but he has an equally long record of trail-blazing design that made waves even if it didn’t, or wasn’t meant to, sell. Remember the hippie jeans at Gucci? The red velvet pantsuit worn by Gwyneth Paltrow? The peak-shoulder jackets for Saint Laurent, and the rage that ensued? And how about his comeback show in 2010, when he created individual looks for each of his 32 models, who happened to include friends like Beyoncé, Rita Wilson, and Julianne Moore? That remains one of my all-time favorite shows, a hammer taken to routinized runways.

Now Ford has dropped the see-now-buy-now plan, but I don’t blame him for trying it — the move spoke to his risk-taking and sense of timing. But given that he should have been freed up to be more adventurous again, it’s a touch ironic that the magisterial sense of the moment was missing last night. In showing hip-hugger pants with those plunging maillots or rolled-cuff shorts with satiny blazers and stilettos, he seemed to be trying to relocate a youthful mojo, but somehow it didn’t feel believable or even particularly fresh. The slutty maillot with nasty jeans is pretty standard summer gear — no amount of polish will change that. I did love the super-short silk T-shirt dresses with glitter briefs, because they nicely dispatched with the old-fashioned question of length. And I could see that Ford was attempting to redefine his women’s jacket — exaggerated shoulders, nipped waist. But overall, the younger attitude felt forced.

Is Narciso Rodriguez the smartest big-name designer on the planet? Maybe. Rodriguez skipped a show this season, and he presented just a dozen or so looks to editors on Wednesday in private appointments. He has been saying for a while that runway shows are a drag on creative time and budgets. He told me, “So many things that go into a show never get produced, which is heartbreaking. Nothing this season will get discarded or go into the archive.”

That sense of purpose ran through every design, from the elegant line of a black wool twill dress with an ivory skirt to a silk-crepe dress draped from a continuous piece of fabric to a black sculpted evening top with a stole that could be worn with either trousers or a long skirt. Rodriguez, who is celebrating 20 years in business, has always focused on the small details of cut and fit — essential to a minimalist designer. At the same time, he’s refined many of his ideas as lifestyles have changed. But the value to him of those habits, that integrity, is now enormous. Because he can actually create a simple and honest design — a harness dress, say, that doesn’t rely on stretch material for its snug fit — you see the difference for yourself, without distractions. Then you can get on with your day. In 2017, that may be the essence of knowing what the moment needs.

celebrity 22 mins ago
Hailey Bieber Shares Her Experience With Ovarian Cysts She revealed she’s suffering from a cyst “the size of an apple.”
crime 12:27 p.m.
What We Know About the Death of Shanquella Robinson A 25-year-old American woman was found dead while on vacation in Mexico. Authorities have issued an arrest warrant for one of her friends.
fashion 10:08 a.m.
What to Know About the Balenciaga Ad Scandal The fashion house is under fire for two separate campaigns that consumers say promote child exploitation.
dream date 8:00 a.m.
Bilal Baig Steps Into Their Comfort Zone Sort Of’s star and co-creator finds their sweet spot.
gone sale-ing Yesterday at 6:24 p.m.
What You Need From Net-a-Porter’s Holiday Sale According to the Cut Shop editors.
black friday Yesterday at 3:00 p.m.
24 Best Cyber Monday Fashion Deals From Everlane, Nordstrom, Saks, and more.
celebrity Yesterday at 1:00 p.m.
Is Minka Kelly Dating the Imagine Dragons Guy? She and Dan Reynolds went out for dinner for … five hours?
chaos Yesterday at 12:16 p.m.
Elon Musk’s Bedside Table Is Even More Terrifying Than You’d Expect Which is more concerning: the multiple guns or the cans of caffeine-free Coke?
brooding Yesterday at 12:00 p.m.
Are There Any Kids’ Books Out There That Are … Actually Good? Wizards and dragons need not apply.
By Kathryn Jezer-Morton
gone sale-ing Yesterday at 10:13 a.m.
33 Amazon Gift Ideas That Are Also On Sale For Cyber Monday Kill two bird with one stone.
celebrity Yesterday at 9:40 a.m.
Pete Davidson and Emily Ratajkowski Hit a New Relationship Milestone They appeared very happy to be together at Sunday night’s Knicks game.
gone sale-ing Yesterday at 9:04 a.m.
21 Cyber Monday Lifestyle Deals to Make Your Humble Abode a Little Less Humble It’s all in the details.
gone sale-ing Yesterday at 8:06 a.m.
The 29 Best Cyber Monday Beauty Deals Tatcha, Sephora, and Nordstrom are already offering some great discounts.
how i get it done Yesterday at 7:01 a.m.
Aurora James Is Too Busy For This Interview The Brother Vellies designer talks 80-hour workweeks, supporting Black entrepreneurs, and wearing Issey Miyake to the gym.
astrology Nov. 27, 2022
Madame Clairevoyant: Horoscopes for the Week of November 28 Jupiter retrograde is ending, so you can put the rose-colored glasses back on.
By Claire Comstock-Gay
sex diaries Nov. 27, 2022
The Divorced Lawyer Who Loves Getting Ready for Dates This week’s sex diary.
snacks Nov. 25, 2022
I Can’t Shut Up About Spam Figgy Pudding It’s so wrong, and yet so right.
culture Nov. 25, 2022
Rebranding Midlife Celebrities like Naomi Watts, Stacy London, and Judy Greer are determined to make a business out of menopause.
5 questions with... Nov. 25, 2022
For Quentin Plair, Stripping Wasn’t Always on the Menu But the Welcome to Chippendales star’s confidence was renewed after playing an exotic dancer on TV.
5 questions with... Nov. 25, 2022
How Amanda Gorman Fostered Her Confidence It didn’t always come naturally, but the poet built it with affirmations from her mom and using her imagery as activism.
More Stories