What Pierre Bergé Taught Me About Fashion

Yves Saint Laurent’s business and romantic partner, who has died at age 86, was bold, fearless, and courteous. 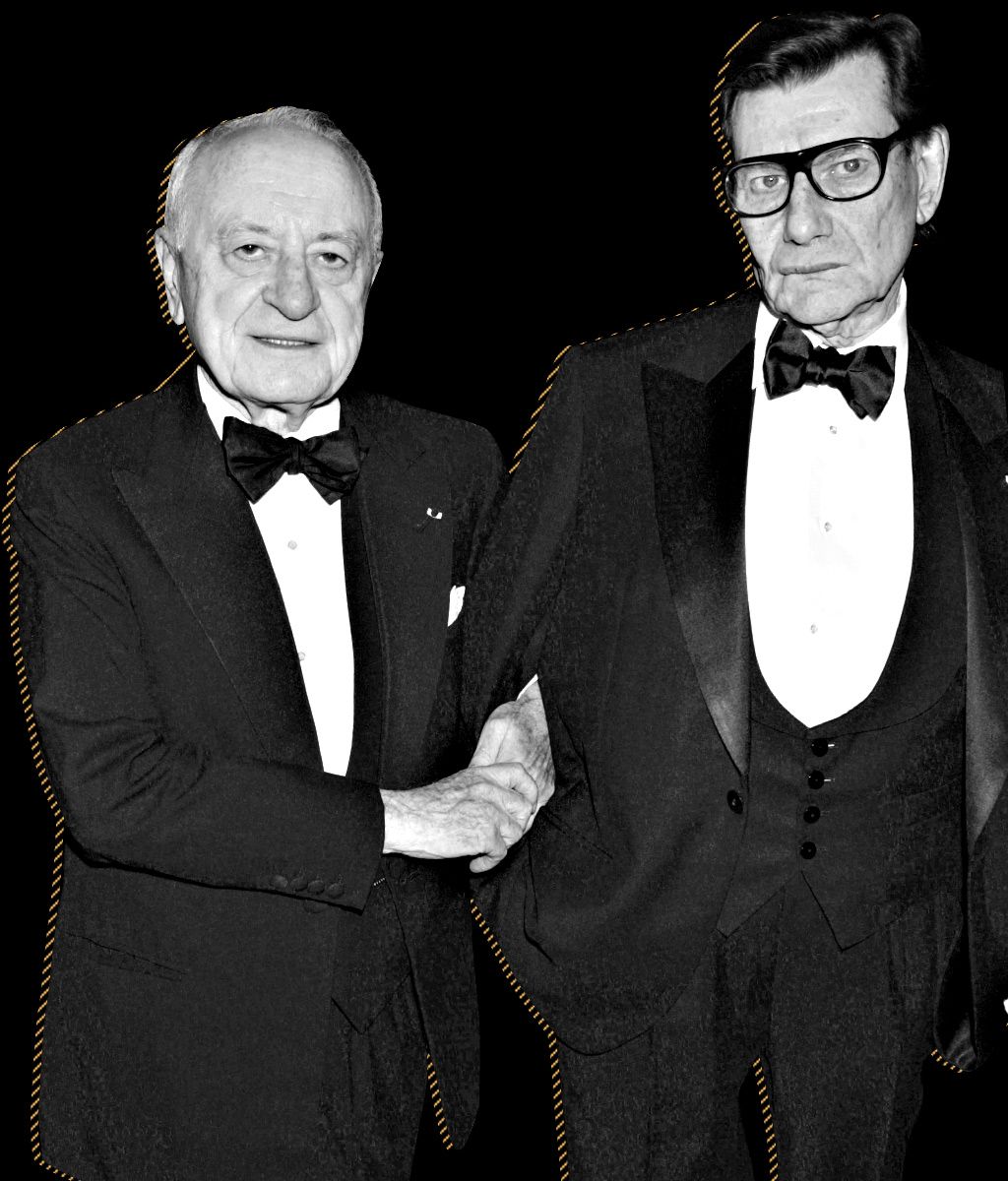 Timing is everything in life, and so it is in journalism. I had the good fortune of becoming a fashion writer in 1986, when the industry was still dominated by privately owned houses founded by extraordinarily tough but generous individuals — men like Yves Saint Laurent and his lifelong business partner Pierre Bergé; Valentino; Giancarlo Giammetti; and Oscar de la Renta. There was a second ring of designers whom I adored, and relied on for gossip and insight, like my friend Fernando Sánchez; and there were the editors who were a school unto themselves — no one more so than the late John Fairchild, whose family owned and ran Women’s Wear Daily during the prime fashion decades of the 20th century. I never worked for John, but we became friends later, after he had retired.

Because these people were part of my development as a fashion writer, it doesn’t take much for a memory to be triggered, and then out rushes a whole series of them. But here I want to tell just one story, about Bergé, who died this week at age 86. It not only illustrates an aspect of his personality perhaps not addressed in the tributes to him, but it also spotlights a crucial difference in journalism and the fashion world between then and now.

In 1999, Adam Moss, then the editor of the New York Times Magazine, asked if I would write a profile of Saint Laurent. He and Bergé were selling the ready-to-wear and fragrance portions of their business to Gucci Group, while retaining the infinitesimal haute-couture house for themselves. It was one of those watersheds in fashion; Gucci and LVMH were battling for supremacy, acquiring old houses, and with Tom Ford’s star power at its absolute zenith, the media focus was on him and Gucci, leaving those two old Paris lions deeply in the shadows.

I rang Bergé at his office in the Avenue Marceau and proposed the story. I didn’t know him all that well — we had met two or three times — but he agreed immediately. That generation of designers was extremely competitive, so the idea of stealing back some of the limelight was probably attractive, and of course, it was another chance to perform the role Bergé had played for four decades: protecting Yves and their legacy. Plus, as everyone knew, he hated Ford.

Bergé told me I could have carte-blanche access to Yves and all their friends. Not only did I spend unfettered time with Yves at his home on the Rue de Babylone, with its jaw-dropping living room filled with masterpieces — a Goya, Picassos, Matisses, etc. — and Jean-Michel Frank furniture, but I also spent time with most of the members of the Saint Laurent entourage: Betty Catroux; Loulou de la Falaise and her husband, Thadee Klossowski; Madison Cox; and Fernando. I also interviewed Karl Lagerfeld in a long, wonderful, late-night session on the terrace of his house in Biarritz. That was the only time, as far as I know, that Lagerfeld spoke publicly about his great friend Jacques de Bascher, and Bascher’s relationship with Saint Laurent, which many in the Saint Laurent circle viewed as destructive.

I had the time of my life, and I got a great story — thanks to Bergé. He simply was not afraid of what I would hear. Well, why would he be? He had seen everything with Yves, who could be incredibly destructive, ingesting everything — including 150 Peter Stuyvesant cigarettes a day (a fact supplied by Bergé). He also knew that Yves’s tremendous willpower, his sensitivities and his terrors, were elemental to his genius, and were part of what separated him from Ford. So he wanted me to see and hear everything.

I remember sitting with Fernando one night in the kitchen of his fabulous apartment in New York (it had a ballroom) as he explained these two complicated, forever entwined men. He told me it was not true, as many then believed, that Bergé controlled Yves; they were accomplices. “They will die with their hands on the other’s throat,” Fernando said. “They would like to be each other’s victim, but there is no victim here — and I would tell it to their faces: ‘You’re both monsters.’”

Today, the fashion business is so controlling and fearful that journalists are almost never given that kind of access anymore. Yves didn’t ask for photo approval; he sat for his portrait at home, and that was that. When the piece was fact-checked, Bergé didn’t ask for one thing to be changed. I saw him quite often after that, sometimes at the Café de Flore — he sat just inside the main door to the left — and he was always friendly, if not overly warm, toward me. I felt strangely that I owed him something, but of course I did not. It was just old-fashioned, professional respect that we had in common and, I like to think, enjoyed.

What Pierre Bergé Taught Me About Fashion

mfw spring 2023 1:56 p.m.
The Best Street Style at Milan Fashion Week Chic looks from this fashionable city.
review Yesterday at 1:59 p.m.
At Gucci, Double the Clothes But Little Direction “Clothes are not enough today,” says Alessandro Michele backstage, as he grappled with the modern conditions for a creative director.
By Cathy Horyn
always shopping Sept. 23, 2022
22 Affordable Sweaters That Look Expensive The best way to prepare for sweater season without spending a fortune.
By Brooke LaMantia and Andrew Nguyen
fashion Sept. 23, 2022
Seeing Double at Gucci As a tribute to his mother, Alessandro Michele cast all twin models.
crime Sept. 23, 2022
Ryan Grantham Has Been Sentenced to Life in Prison The Riverdale actor killed his mother in March 2020.
less work Sept. 23, 2022
How About a 4-Day Workweek Already? The largest study to date shows that many employees who work a shorter week are actually more productive.
best in class Sept. 23, 2022
The 15 Very Best Plush Mattress Toppers Think of a plush mattress topper like fluffy, sumptuous icing for your mattress cake.
By Latifah Miles
best in class Sept. 23, 2022
15 of the Very Best Water Bottles Always be hydrating.
By Emma Wartzman
are u coming? Sept. 23, 2022
Richie Akiva Is No Longer the King of Nightclubs, Okay? His post-pandemic move: a celebrity-packed … members-only club.
By Brock Colyar
review Sept. 23, 2022
At Prada, Subtle Sex and Modern Minimalism Raf and Miuccia play with “gestures of error” in their cinematic show.
By Cathy Horyn
parties! Sept. 23, 2022
Katie Holmes, Chloë Sevigny, and More of the Bestest Party Pics This Week  Chanel, Mejuri, and more celebrate.
lies Sept. 23, 2022
Alex Jones Is Back in Court for Sandy Hook Lies A Texas jury already hit the Infowars host with nearly $50 million in damages.
fashion friend Sept. 23, 2022
Hey, Fashion Friend: Are Ballet Flats Back? Technically, yes, but you don’t have to wear them.
how i get it done Sept. 23, 2022
How Street-Style Photographer Christina Fragkou Gets It Done During Fashion Week “If my headphones are not in and the music is not pumping: I’m asleep or I’m crying.”
By Brooke LaMantia
extremely online Sept. 23, 2022
I Can’t Shut Up About Brad Pitt’s Sculptures As if the man doesn’t have enough!
holiday gifts Sept. 23, 2022
What to Gift the Gen-Zer in Your Life According to a member of this generation.
¡hola papi! Sept. 23, 2022
‘How Can I Learn to Be More Present?’ When we accept that there are things beyond our control, it’s easier to live in the moment.
By J.P. Brammer
oh good Sept. 22, 2022
Johnny Depp Is Reportedly Dating His Trial Lawyer But not the one you think.
is this flirting? Sept. 22, 2022
Adam Levine Only Has Adam Levine to Blame Sumner Stroh may have accused him of cheating and sending deranged texts, but it’s not the “other woman” who’s the problem.
By Claire Lampen
review Sept. 22, 2022
A New Energy at Milan Fashion Week Diesel gives Gen Z what it wants and Kim Jones of Fendi shows a fresh look.
By Cathy Horyn
More Stories