Emma Portner’s Body Is Her Megaphone

And she’s using it to queer up the dance world. 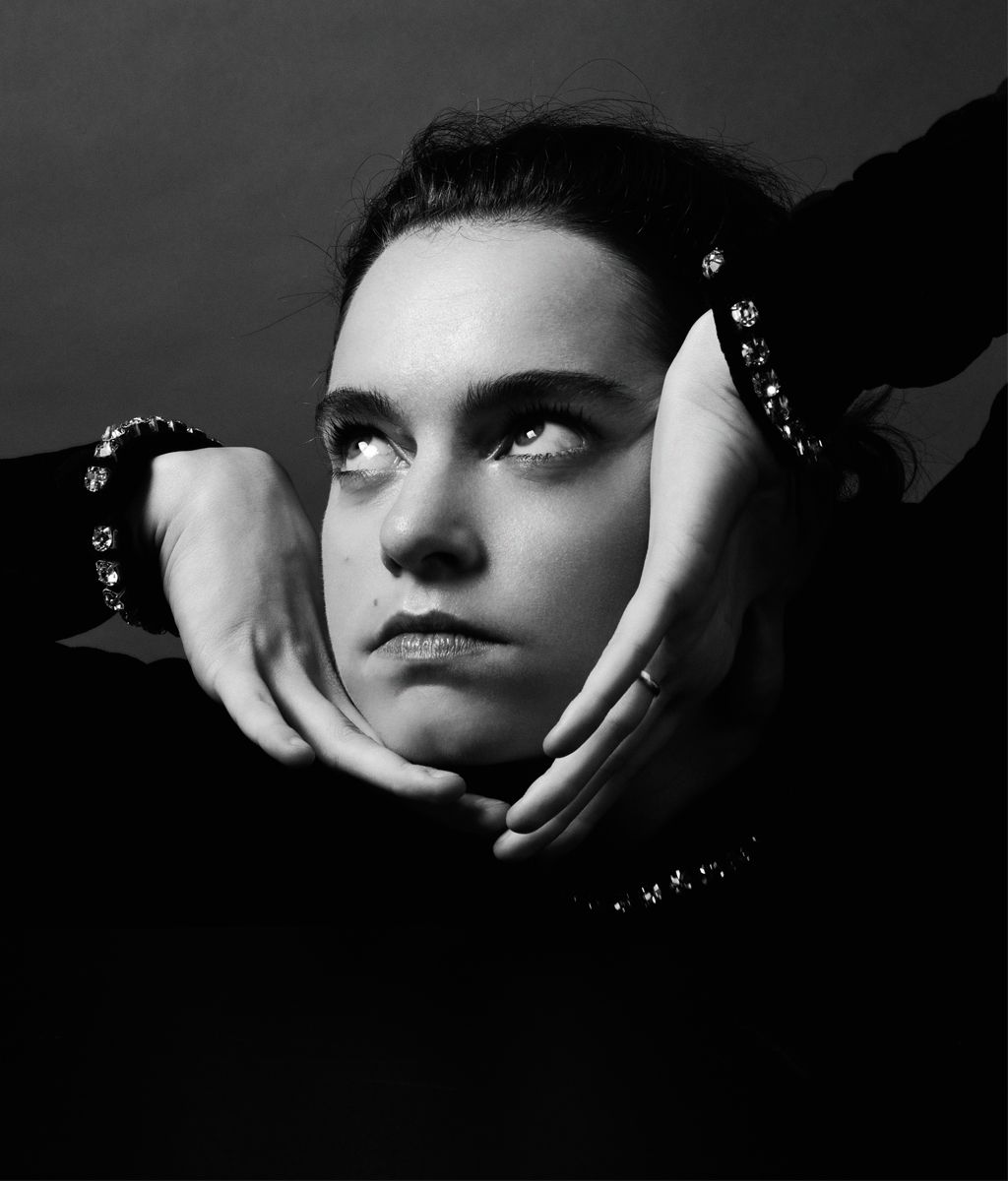 Emma Portner is standing in the corner of a Bushwick studio draped in a camouflage contraption of Balenciaga’s that fits her roughly like a T-10 parachute. Her head is visible, and so are her legs from the shins down, but every other part of the 22-year-old dancer’s body is engulfed. Then, the cameras start to click — and she starts to move.

Several people watching gasp, and there’s an audible “wow” from someone in the back as Portner whirls the camo fabric around her body so fast it crackles. She slows down and twirls it over her head, matador-style, before lowering her whole body into a crouch, her head parallel to the floor, feet skittering across the wooden planks.

The way Portner moves has transfixed the dance world. In the past few years alone, she’s choreographed and starred in Justin Bieber’s music video for “Life Is Worth Living” as well as a piece on his Purpose World Tour; founded her own dance company — first named Flock’d, now called Emma Portner and Artists — in New York City; conceptualized a music video for indie artists Blood Orange; taught classes in New York, Los Angeles, and her native Canada; and become the youngest woman to ever choreograph a musical — Bat Out of Hell, which premieres in Toronto October 14 — on London’s West End. It’s quite the portfolio for someone who used to stick to the back row.

“I had to work through so much non-attention — I was always fighting for it,” Portner told the Cut. Now that she’s won that fight, “it just feels like I’m an endless pit of content.”

It leaks out even when she’s talking — when, instead of using words to express a thought, she stops speaking and slips into pantomime. “I go into a studio like this,” she says, using her hands as blinders, or “my brain is like this” (hands moving in quick circles around each other), or “after the musical, I kind of went like this” (forearm angling into a steep downward slope). Words are secondary — Portner’s body is her primary method of communication. “I used to be such a mute,” she says. “When I realized dance could help people hear what I had to say in a clear way, that’s when I started to love it.”

Portner has been dancing since her parents signed her up for classes at 3, spending her formative years at Leeming Danceworks in Ottawa, Ontario. She spent summers doing intensives with companies like The National Ballet of Canada, and at 16 she moved to New York to train at The Ailey School. She was also 16 when she choreographed and recorded “Dancing In the Dark” with Los Angeles–based dancer Matt Luck. They posted the video to YouTube, where it quickly racked up thousands of views and likes — so many that it attracted the attention of Parris Goebel, the choreographer who’d been tasked with Justin Bieber’s “Purpose” visual album. Goebel told Dance Spirit that Portner’s style — a striking flavor of highly technical contemporary expressed through intricate, gut-wrenching jerks and undulations — struck her as a perfect fit to illustrate “Life Is Worth Living.” Almost 50 million views later, it’s clear she was spot on.

But even before the eyes of the international dance community were on her, Portner was video-taping herself in the studio. “I started recording myself when I was 12,” she says. “I used to spend three hours a night watching the day’s footage forward and in reverse,” not out of a narcissistic impulse, but as a tool to improve her improvisational technique. “I use it to break patterns,” she says. “If I start to develop a go-to movement, that means I’m stale.”

Improv is Portner’s bread and butter — the foundation upon which her choreography rests. “To me, improvisation means taking a completely un-serious thing completely seriously,” she explains. “I used to be scared of it. What made me like it, I think, was realizing that I could connect it to trauma. When I was younger, what was I dancing about? What did I have to improvise from? But now, my work can reflect what’s happening now or something I’ve experienced. I always want to dance my history.”

So what does that look like in practice? “When I’m going to improv, I limit myself to a small idea — I’ll paint the floor with my body, or I’ll pretend the ceiling is right there,” she says, pointing to a spot near her midriff.

Then, she filters that idea through the dialogue going on in her head and translates into movement, a process she likens to painting by numbers.“I’m talking to myself the whole time,” she says. “It’s a lot of color and numbers and directions and words: up, down, circle, square, through, around, corner, dog, water. [That conversation] is always going, constantly constantly constantly.”

She does improv almost every day, sweating it out alone in the studio and posting the clips to her famously bare-bones Instagram account. Her posts are a deliberately unfiltered look at her process, and they’re so popular that until late August, she didn’t have a manager — the directors, choreographers, and organizations that approached her did it through (and because of) her Instagram.

Instagram also happens to be how Portner met her partner, Ellen Page: she posted a video to a song by Sylvan Esso, the band shared the video, and Page saw it and DM’d her. (Page, who stops by the shoot, says she thought Portner was “the shit.”) Now, Portner’s name appears next to Page’s in Daily Mail headlines about the two of them holding hands at movie premieres, or kissing in West Hollywood. “It’s quite crazy,” Portner says of her new tabloid fame. “But if anything, I’m happy for it. We try to hold hands in public. I try to join her at movie premieres. If we were a straight couple, I don’t think we’d push it so much. But it’s a chance for queerness to be out in the open.”

They’ve even collaborated on projects, such as a spontaneous interpretation of Britney Spears’s “Lucky” that made the internet rounds, and a stunning video set to Sylvan Esso’s “Slack Jaw.”

Thank you for the beautiful #slackjaw support. I am so privileged for this platform and the life I get to lead. @ellenpage is incredible! Shot by: @saskiakivilo Music: @sylvanesso

“I got comments on that video thanking me for showing two women dancing together that way,” she says of the latter. “I was like, ‘What way?’ And then I realized, that’s still new to people.”

Emma Portner’s Body Is Her Megaphone
gone sale-ing 5:22 p.m.
10 Things You Don’t Have to Pay Full Price for This Weekend Deals from Neiman Marcus, Farfetch, Sephora and more.
art basel 5:19 p.m.
Suchi Reddy Actually Likes Art Basel for the Art Her latest installation was inspired by the Miami clouds.
are u coming? 4:42 p.m.
Art Basel Was Made for Madonna And I’m almost too hung-over to write this dispatch.
By Brock Colyar
5 questions with... 2:28 p.m.
Meet the Black Woman Who Built a 15-Year-Old Fashion Business Sherri McMullen’s Oakland luxury store is one of a kind. Here’s how she did it.
art basel 1:43 p.m.
Pharrell, Gigi Hadid, and More of the Bestest Party Pics This Week Celebrating with Fendi, Saint Laurent, and more.
uvalde 1:19 p.m.
What We Know About the Police Response to the Uvalde Shooting A class-action lawsuit by survivors against law enforcement asks $27 billion for “indelible and forever-lasting trauma.”
celebrity couples 1:00 p.m.
Finally, the Good Morning America Romance We Deserve Amy Robach and T.J. Holmes are now New York royalty.
friday sales 12:41 p.m.
22 Things on Sale You’ll Actually Want to Buy: From Alex Mill to Star Wars And a flower-shaped cat fountain that Strategist readers love.
celebrity 11:44 a.m.
Nia Long Is Not Happy With the Celtics In her first interview since the Ime Udoka scandal broke, the actress said she was disappointed with how the NBA team handled things.
always shopping 11:14 a.m.
17 New Year’s Eve Outfits That Aren’t Sparkly Yes, it is possible to wear something other than sequins.
fashion 10:56 a.m.
What to Know About the Balenciaga Ad Scandal The fashion house is under fire for two separate campaigns that consumers say promote child exploitation.
yikes 10:18 a.m.
Rebel Wilson, We’re Confused Her new loungewear collection isn’t size-inclusive … at all.
are u coming? 10:00 a.m.
At the Eagle With the Sniffies Zaddy One long night with the founder of the sluttiest gay cruising app.
By Brock Colyar
extremely online 9:55 a.m.
I Can’t Shut Up About This Giant Teddy-Bear Man Meet “Loving Bear Puffy,” a stuffed toy the size and shape of a human man.
2022 fashion year in review 8:00 a.m.
The Dad-ification of Fashion The “dad vibe” is all about comfort, function, and nonchalance, like an outfit you just threw on to run to Lowe’s.
always shopping 8:00 a.m.
Yes, Socks Are a Great Gift You don’t have to worry about sizing and it can make or break an outfit.
5 questions with... Yesterday at 6:24 p.m.
Ayesha Curry on Holiday Planning, Comfort Foods, and Her Healing Hut She’s teamed up with Bloomingdale’s to make the holidays easier.
keeping up with the royals Yesterday at 1:11 p.m.
Will and Kate’s Big Night Out (in Boston) The Prince and Princess of Wales received mixed reviews at a Celtics game on Wednesday.
2022 fashion year in review Yesterday at 12:59 p.m.
The Year in Viral Celebrity Fashion Rihanna redefined maternity, Florence Pugh showed us revenge dressing, and Heidi Klum was a worm.
royals Yesterday at 12:25 p.m.
How Does Boston Like Will and Kate? The royals received a mixed response at Wednesday night’s Celtics game.
More Stories