7 Months Pregnant and Trapped in a Hurricane

“I thought: My baby and I are going to drown.”

By Lauren Lunar, as told to Alexa Tsoulis-Reay 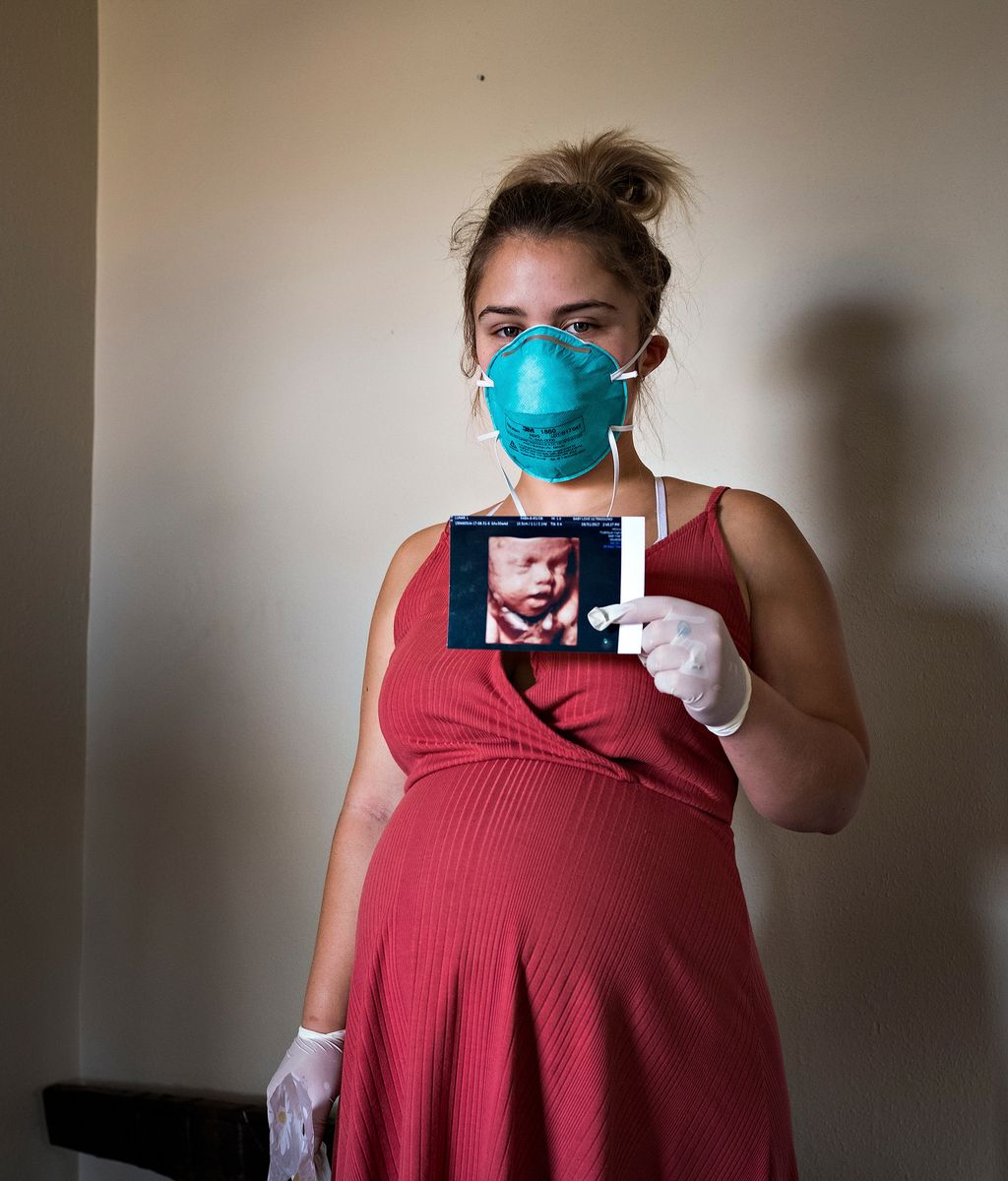 So far this year, 16 hurricanes and tropical storms have caused billions of dollars’ worth of damage, and displaced thousands of people around the country. Twenty-year-old Lauren Lunar is one of them. When Hurricane Harvey plowed through southeast Texas in August, Lauren was seven months pregnant and her hometown, Dickinson, was the worst hit: 90 percent of the area flooded and more than 7,000 homes were seriously damaged. Today, the news media has shifted its attention, but for Lauren, who is expecting her first child on November 5, the challenges of how to move forward are just beginning.

The night the hurricane came, I was seven months pregnant and stuck in the front seat of my friend’s Mercedes. My cousin, Katerina, and I had been cooped up all week waiting for the storm but nothing was happening. So on Saturday we were like, let’s go hang with friends and watch the Mayweather fight. We dropped Katerina’s baby off with her parents and ten minutes later, the rain came down and our car started flooding. It was too late to turn back. I thought: My baby and I are going to drown here. Once the water comes up a certain level, you can’t open the doors. So many people died that way.

We kept driving and finally made it to our friends’ house. It was pitch black. The three of us sat on the corner of her bed crying while the water rose. Katerina was saying, “I can’t believe I left my daughter …” Cell service was dipping in and out. I kept calling 911 and telling them I’m pregnant and my cousin has a baby in another house and we are stuck. They said 150 people had to be rescued before they could get to us. Everyone was fighting over the outlets to charge their phones; then the water rose so high we couldn’t even use them.

I was panicking. I took off my sweatpants — because my belly is so big and I didn’t want to sit in dirty wet clothes — so I was wearing a giant T-shirt and no pants walking through the green sewer water like swoosh, swoosh. I probably went to the bathroom 20 times. Dickinson is the bayou and the water in the house was a swamp, with hair and feces floating in it. The bathtubs and trash cans overflowed. I was gagging, throwing up. We put a towel at the end of the bed so we could wipe ourselves when we got back up. I was really scared the water would touch me “down there.” I was thinking, what if the baby gets an infection, or comes out with four eyes?

My parents came to get us early in the morning; they’d waited all night for rescue boats. I was staring out the window, watching the sun go up, and I saw a man canoeing. I’d been feeling hopeless. Dad is a germophobe like me and he was screaming “Do not let your crotch touch the water!” I was in my underwear yelling, “I can’t help it!” My mom’s screaming, “What’s she supposed to do … fly?” They got me and Katerina out (my friend’s parents wanted to stay and defend their house) and took us to my grandma’s gated community in Lake City. It’s on a higher level so it didn’t get water at all.

For weeks there was 13 of us living in my grandparents’ house. Katerina and her family just left. Even though their house is gutted, they are sleeping with open walls on air mattresses because my grandmother had a problem with their dogs. When we were all here it was chaos. Mom and Dad were stressed, they would go hide in their room to get away from it all. I’ve been sleeping with my grandma and every time I get up to pee, which I have to every 30 minutes, I wake her up. She’s very old. We switch places most nights because there’s not enough room for us to all sleep comfortably. My little brother is sleeping on the couch and waking at 6 a.m. to get to school.

I always wanted to get out of Texas. When I was 18, I moved to L.A. I found work and I was stacking up money. I felt like I was living the dream. My family flew me back to Texas for Christmas. I met this guy, fell in love, got pregnant, and then we broke up. During the hurricane, I wanted him to comfort me. I was wishing that he would check to see if I was okay. I’m due on November 5, and I don’t have anything set up. I’m stressed about money. We had insurance for our cars, but not the house. I’m freaking out and I’m kind of depressed. Every day I am hoping and hoping that the baby’s dad will text.

The day the weather cleared, we finally went back to see our house. We all wore masks to protect ourselves from mold and asbestos in the air — and to avoid the sewage and chemical smells that had contaminated the house during the flood. Pretty much everything got ruined, apart from one container of baby stuff, and I had a bassinet suspended from the ceiling. When I saw the house my first thought was: I’m not going to have anywhere to bring him. I was very emotional, thinking I should have my significant other helping me do this.

My grandmother has been helping us wash some stuff but most isn’t salvageable because it has clumps of mold on it. I was smelling my pageant and senior prom dresses to see how bad the mold was. I had to get rid of them; apparently the spores stay in the fabric forever. Everything was gone and all I could think was, Where am I going to bring my baby?

The next day I woke up with a rash all over my body. At first the doctor said it was a mold allergy but now my ob-gyn said it’s a rare pregnancy rash caused by stress. The other night the itching was so bad, the bumps turned into welts; I had to go to the ER and get Benadryl through an IV.

FEMA is supposed to come by and inspect the house and take all the debris, but everyone still has the contents of their house in their yard. Churches have been bringing hot meals and boxes of cleaning supplies. My family is Christian, but we consider ourselves more spiritual than religious. What has been getting us through this is praying and asking God: Everything that was washed away, please restore it.

I don’t feel like FEMA is looking after us, at all. They haven’t come by our house to inspect or pick up trash or anything. We haven’t gotten any type of settlement for our house or belongings. It’s just a waiting game.

I’ve lost so many things in my life. We’ve lived in a lot of places. I’m not materialistic, but I’m looking into the future thinking: Once the baby is here, if I don’t have a house and the father hasn’t come around, I can’t see myself feeling more hurt or stressed than I am now.

7 Months Pregnant and Trapped in a Hurricane
crime Yesterday at 5:19 p.m.
A Train Hit a Police Car With a Woman Handcuffed Inside She survived, though her attorney wonders why Colorado officers left their SUV parked directly on the tracks.
mfw spring 2023 Yesterday at 5:19 p.m.
The Best Street Style at Milan Fashion Week Chic looks from this fashionable city.
royals Yesterday at 4:43 p.m.
The Palace Is Reportedly Panicking About The Crown Again Royals are concerned the upcoming season will damage King Charles’s reputation.
all in the family Yesterday at 3:33 p.m.
Untangling the Secrets of a Teenage Mother We think of our parents as known quantities. But as Salon editor-in-chief Erin Keane writes in her memoir, Runaway, we rarely know the whole story.
mental health Yesterday at 3:15 p.m.
Megan Thee Stallion Wants to Help Hotties Get Therapy “Bad Bitches have bad days too.”
culture Yesterday at 11:57 a.m.
Why Is Hollywood Still So Obsessed With The Stepford Wives? Don’t Worry Darling wears its references to the cult classic on its sleeve.
review Yesterday at 11:52 a.m.
Does a New Designer Mean a New Direction? Not always. A mixed review of the debuts in Milan.
By Cathy Horyn
how i get it done Yesterday at 10:00 a.m.
How Über-Publicist Gia Kuan Gets It Done During Fashion Week “People would be shocked. It takes me maybe three minutes to deal with my makeup, do my hair, and get out the door.”
By Sangeeta Singh-Kurtz
celebrity babies Yesterday at 10:00 a.m.
Another Baldwin Has Arrived Hilaria announced the arrival of the couple’s seventh child.
divorce rumors Yesterday at 9:57 a.m.
Gisele Bündchen Isn’t Thrilled With Tom Brady’s Decision to Un-Retire She appears to have skipped his first home game of the season.
bffs Yesterday at 9:00 a.m.
Can a Childhood Friendship Really Last a Lifetime? In Best of Friends, novelist Kamila Shamsie attempts to find out.
life after roe Yesterday at 8:00 a.m.
The Abortion Crisis Manager Oriaku Njoku spent years fighting for patients in the South. Who else could lead abortion funds into the post-Roe world?
By Andrea González-Ramírez
how i get it done Yesterday at 7:00 a.m.
Ana Fabrega Was Supposed to Work in Finance, Not Comedy Fortunately for us Los Espookys fans, she pivoted.
By Max Gao
astrology Sept. 25, 2022
Madame Clairevoyant: Horoscopes for the Week of September 26 Late Thursday night, Venus enters Libra, lending added support to your Libra-season quest for social harmony.
By Claire Comstock-Gay
sex diaries Sept. 25, 2022
The Event Planner Whose Chef Boyfriend Wants More Sex This week’s sex diary.
culture Sept. 25, 2022
Rihanna is Going to Make Us All Watch the Super Bowl The singer will headline the 2023 Super Bowl Halftime Show.
review Sept. 24, 2022
At Gucci, Double the Clothes But Little Direction “Clothes are not enough today,” says Alessandro Michele backstage, as he grappled with the modern conditions for a creative director.
By Cathy Horyn
always shopping Sept. 23, 2022
22 Affordable Sweaters That Look Expensive The best way to prepare for sweater season without spending a fortune.
By Brooke LaMantia and Andrew Nguyen
fashion Sept. 23, 2022
Seeing Double at Gucci As a tribute to his mother, Alessandro Michele cast all twin models.
crime Sept. 23, 2022
Ryan Grantham Has Been Sentenced to Life in Prison The Riverdale actor killed his mother in March 2020.
More Stories