In 2017, there’s no such thing as too much twinkle. Sparkling dresses, backpacks, apps, and even beards. 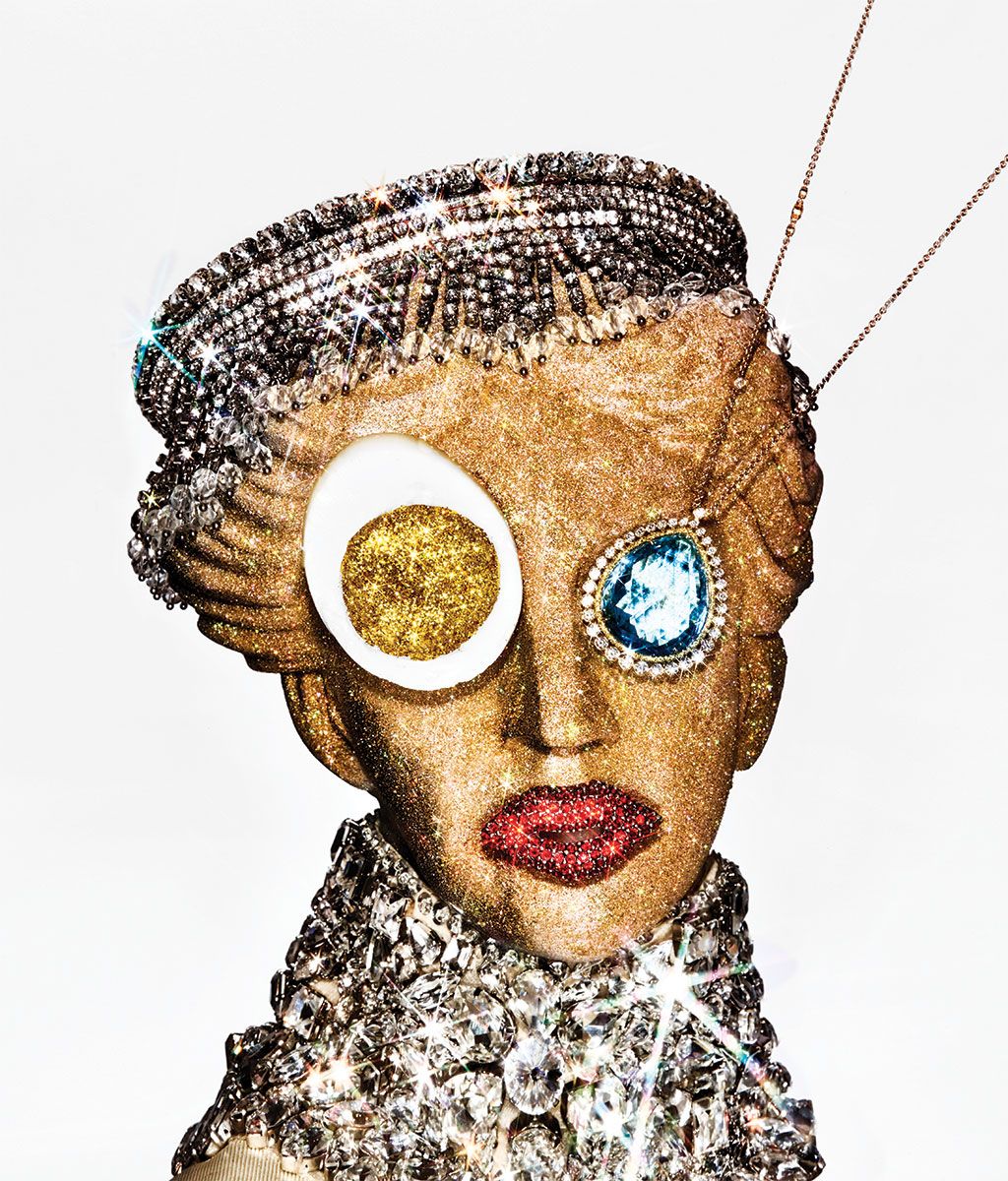 It used to be that shining bright like a diamond was reserved for Rihanna, or stars of the celestial and Hollywood variety, but now there’s an app for that. It’s called Kirakira+, and for 99 cents, your entire world can look like a Disney fairy tale. Launched two years ago, the app (which translates to “glitter” in Japanese) gained mainstream popularity in the Western Hemisphere only this season, when influencers, models, and celebrities started using it as Instagram catnip during Fashion Week. It’s no coincidence that sparkly products were trending on the runways and in stores at the same time. Saint Laurent, for example, showed a pair of $10,000 silver crystal boots for fall that appear to have their own built-in Kirakira+ filter. (Kendall Jenner’s Instagram of them got 6 million views.) Bella Hadid shared a Kirakira+ selfie backstage while wearing one of Pat McGrath’s glossy couture makeup looks. And actress Kate Bosworth recently used Kirakira+ on the red carpet to highlight her sequined Alexandre Vauthier dress.

Just point the Kirakira+ app at anything reflective, whether it’s your dinner fork or your wedding ring, and suddenly everyday objects will give off magical glints of light. You can even adjust the level of shine you want. But Kirakira+ comes with a warning: Some things, if not Kirakira+’ed judiciously, can be engulfed in their own glow.

Star Power: In 2017, There’s No Such Thing As Too Much Twinkle

The Smithsonian is working to conserve each individual sequin on the original ruby slippers that Judy Garland wore in the 1939 film The Wizard of Oz. (There are roughly 2,400 red sequins per shoe, and they’re cleaned under a microscope.) “It’s a movie that has impacted so many generations of people,” said Smithsonian conservator Dawn Wallace. As a result, Dorothy’s slippers are one of the most popular objects in the museum, which has raised $346,026 on Kickstarter to conserve them. “It’s the idea of hope and dreams,” Wallace continued. “When you look at them and you see that sparkle, you really do feel this magic.” 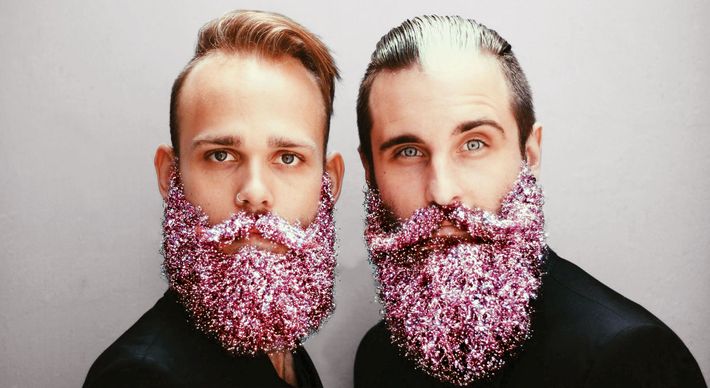 Before Kirakira+, guys were sprucing up their visages the old-fashioned way with “glitter beards.” Portland natives Brian Delaurenti and Jonathan Dahl (pictured) started the trend back in 2015 when they shared it on their popular Instagram account, the Gay Beards. “When glitter is on your beard, you have to be careful not to breathe it in,” warns Delaurenti at the start of their accompanying YouTube tutorial, which has 618,440 views to date. “It does get everywhere,” echoes Dahl.

Designers are bringing a much-needed sense of joy and fantasy to fashion with clothes that light up the runways and our screens. “For me, sequins have always been a protest against banality,” the British designer Ashish Gupta, whose shows are often the brightest at London Fashion Week, told me. “Glitter against gloom.”

“Sequins reflect optimism,” said Laura Kim and Fernando Garcia, the designers behind Monse, a young New York–based label, and now Oscar de la Renta. They can also elevate a casual piece of clothing, like a deconstructed basketball jersey, which Monse showed for spring 2018. “It creates a very interesting high-low dynamic,” the designers added of their now-signature aesthetic.

Celebrities love these attention-grabbing looks for the red carpet. As for the rest of us, even knockoffs look expensive.

Young people have always demonstrated an innate wonder for sparkles, whether it’s through their clothes, crafts, or toys. Today, the kids of New York are begging their parents for sequin-covered backpacks, which not only stand out in the schoolyard, but also are the sartorial equivalent of fidget spinners. If you rub the sequins back and forth, the backpack’s surface changes colors. Style.Lab sequined backpack, $38 at amazon.com.

Andy Warhol, a lover of all things colorful and rich, once referred to the Bulgari store as being the “most important museum of contemporary art.” Forty-five years after coming to New York, the Italian fine-jewelry brand has reopened its Fifth Avenue flagship with a top-to-bottom renovation overseen by the architect Peter Marino, and it’s even shinier than before. Inspired by the city that never sleeps, the store’s façade is covered in a lattice of Bulgari “rosetta” flower motifs that light up at night, rivaling the storefronts of Times Square.

*This article appears in the October 2, 2017, issue of New York Magazine.

There’s a Glitter Takeover Happening in Fashion
review 8:08 p.m.
Dior Shines With a Strong Womanly Show It points to the craving for more female voices.
By Cathy Horyn
power 2:43 p.m.
Everything to Know About the WNBA Star in Russian Custody Brittney Griner sent a personal plea to President Biden.
fourth of july 1:00 p.m.
Highland Park Shooting Suspect Is In Custody Charges have yet to be filed.
reading list 10:00 a.m.
Honey & Spice Is the Ultimate Summer Romance Read Author Bolu Babalola is a “Romcomoisseur.”
self 8:00 a.m.
How to Help Your Friend Through Divorce There’s not a perfect universal script we can use to respond. But here are a few places to start.
in sickness and in health Yesterday at 7:56 p.m.
Travis Barker Is Feeling ‘Much Better’ He said he was hospitalized with “life-threatening pancreatitis” after an endoscopy went wrong.
extremely online Yesterday at 3:30 p.m.
I Can’t Shut Up About the Barbie Movie Each behind-the-scenes look is a sparkly pink hit of nostalgia and dopamine.
By Mia Mercado
celebrity Yesterday at 1:51 p.m.
Halsey Reflects on the Abortion That Saved Their Life “My abortion saved my life and gave way for my son to have his.”
wait what is happening on tiktok? Yesterday at 10:00 a.m.
Why Does TikTok Want Me to Use My Vagina for Perfume? It’s called “vabbing,” obviously.
how i get it done Yesterday at 7:00 a.m.
How Juliette Binoche Gets It Done The actress tells the Cut about almost drowning while filming, her favorite chocolat, and why she doesn’t watch movies before bed.
By Jenna Mahale
astrology July 3, 2022
Madame Clairevoyant: Horoscopes for the Week of July 4 Late Monday night, action planet Mars enters Taurus and invites us all to settle in for a long haul.
By Claire Comstock-Gay
sex diaries July 3, 2022
The Queer Divorcé Exploring Polyamory This week’s sex diary.
lawsuits July 3, 2022
Amber Heard Asks the Court to Set Aside the Defamation Verdict A new filing from her attorneys claims the verdict was not supported by evidence.
celebrity July 3, 2022
Ricky Martin Denies Allegations Resulting in a Protective Order A rep called the allegations “completely false and fabricated.”
congrats! July 3, 2022
Lindsay Lohan Is Now a Married Woman “I am the luckiest woman in the world.”
day in the life July 1, 2022
The Anti-Wedding Wedding Planner Everything it takes to throw a “love party.”
for your consideration July 1, 2022
The Best Way to Spend the 4th of July Tips for enjoying the long weekend when you’re not in the mood to celebrate America.
parties! July 1, 2022
Selena Gomez, Emily Ratajkowski, and More of the Bestest Party Pics This Week This week: Marc Jacobs’s fall 2022 presentation, NFT parties, and Pride celebrations.
instagram worthy July 1, 2022
Expensive Elopements Are the New Dream Wedding The more elaborate — and exclusive — the better.
By Kate Willsky
fashion July 1, 2022
Virgil Abloh’s Vision, on Full Display at the Brooklyn Museum We chatted with “Figures of Speech” curator Antwaun Sargent, who worked on the exhibition with Abloh before the designer’s death.
More Stories