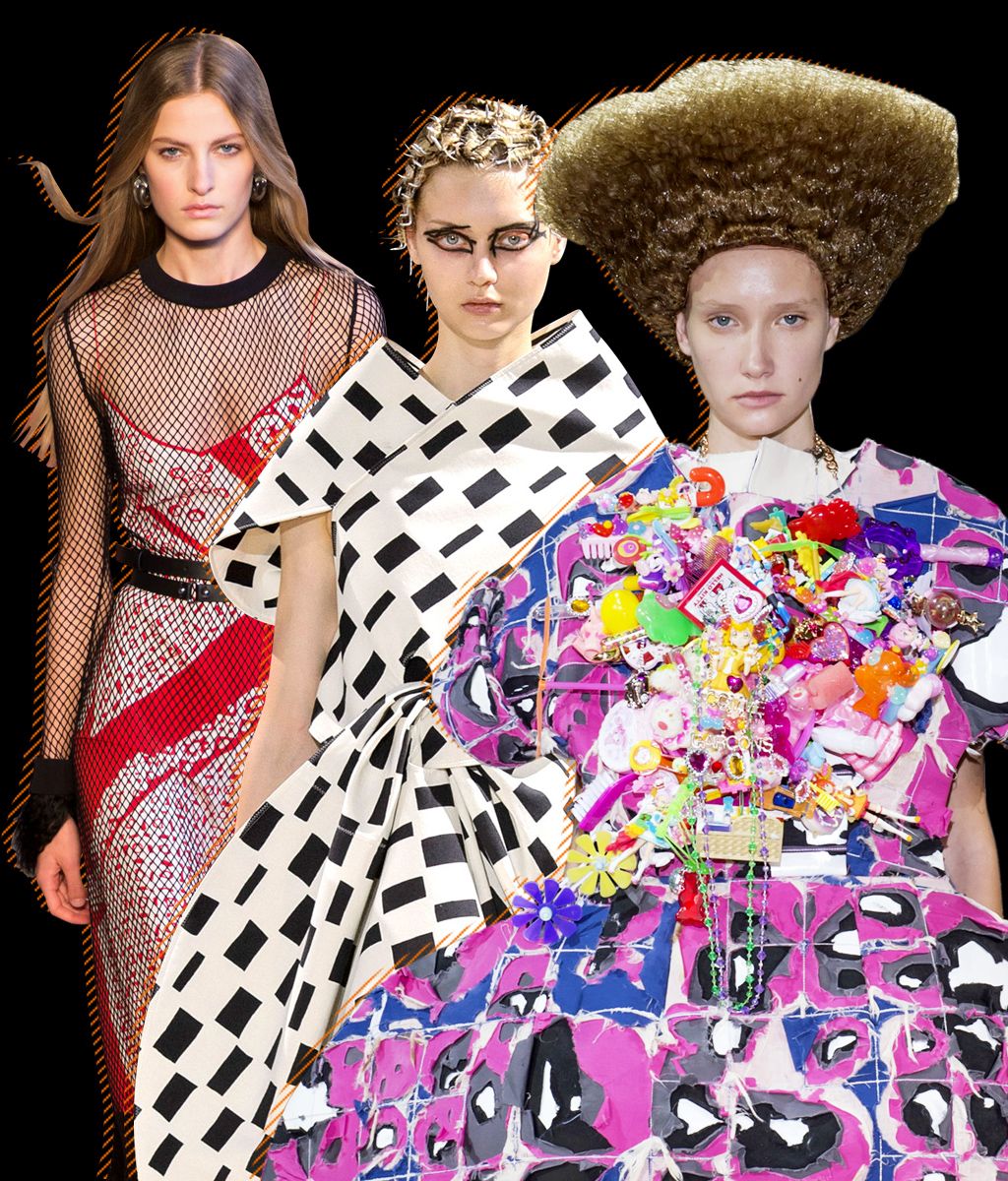 The fashion designer Junya Watanabe is to punk what Michael Bay is to explosives. You expect him to throw in a metal spike or two. And when he is not sampling punk or some other youth-culture mode — the latest Berlin band, say — he is diving into experimental cutting techniques, like the three-dimensional honeycombs he created in 2015.

So, it was a surprise and a delight to see Watanabe on Saturday turn his attention to something else. The models still had five-inch nails poking out of their heads, but now their clothes looked pretty and grown-up. The difference was partly in the fabrics that Watanabe used — nine different black-and-white cotton prints from Marimekko’s interior fabrics line, including bold dots and checks, and one that resembled an illustration of vegetables.

The other point of difference was Watanabe’s feminine shapes. He showed simple, sculptural tops and draped dresses that worked in harmony with the Marimekko circle patterns. There were minimalist coats in the check patterns, and a beautiful white leather motorcycle jacket (produced by Schott in New Jersey), with a blue striped T-shirt and a draped skirt in the veggie print. Watanabe brought a new dimension to Marimekko’s familiar patterns, and the cotton prints lent the Japanese designer’s clothes a new lightness. I could imagine women who had never heard of Watanabe being attracted to these clothes, in part because they were so flattering on the body and not in the least ageist. 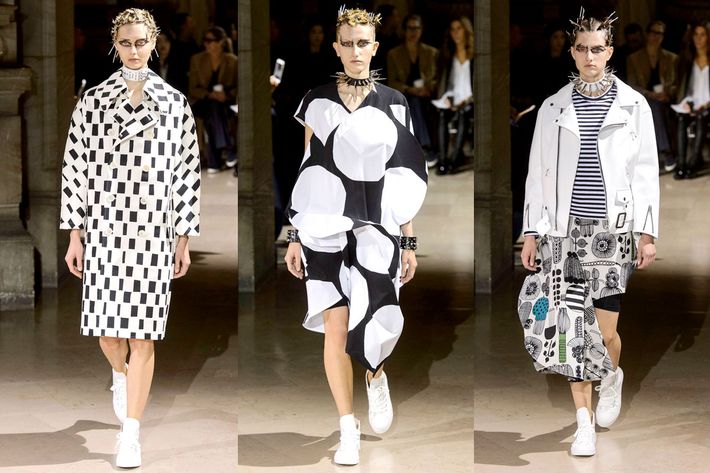 It can’t be easy being Rei Kawakubo, who at this stage of her remarkable career — and coming off her demanding costume exhibition at the Met — may find it harder to find new areas of expression. Certainly her recent shows have amounted to a resistance to conventional fashion (even by avant-garde standards). Her pieces are closer to sculpture than clothing.

This season, the theme for her over-scaled shapes in a mash-up of colors and patterns was “multidimensional graffiti.” Prints were based on the work of about ten artists; a big-eyed Manga girl; graffiti scribbles; crows; and Dutch Masters flowers. The trinkets and other childish junk nested in the models frizzed wigs suggested of course innocence and loss, but that would be too easy an interpretation for Kawakubo’s motives. And she never explains. All those Mango colors, bulbous sleeves, and frayed patchwork easily translated into wearable looks in the Comme des Garçons showroom, but I didn’t find the runway pieces as moving or thought-provoking as other recent work. I wonder if Kawakubo herself is ready to strip things down. 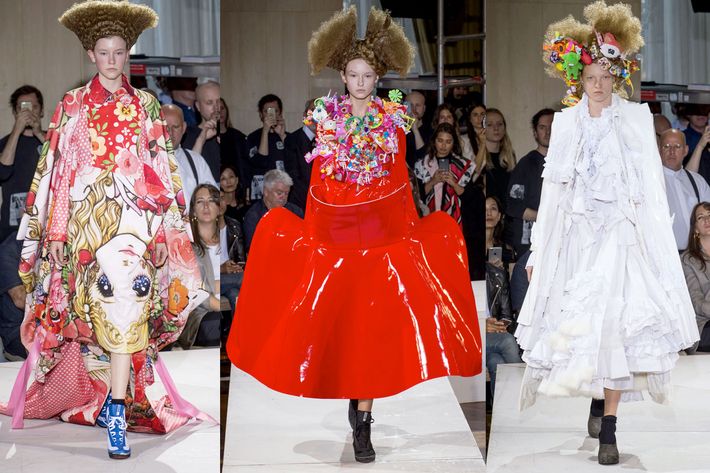 The Paris shows have been full of casually elegant summer clothes — the bohemian T-shirt dresses and layers at Loewe, the gingham checks and PJ stripes at Sonia Rykiel, Chloe’s knock-around knits and silk floral-print dresses with low-heeled cowboy boots. And of course, Watanabe’s clever use of a cotton classic.

So my first reaction to Joseph Altuzarra’s show — in the courtyard of a high school — was that he needed to ditch the high heels and put his models in flats or sneakers. That’s been the mood in Paris. Altuzarra, who was born and raised in Paris, is making a kind of comeback after establishing his label in New York nearly a decade ago.

Indeed, the styling of the show felt more New York than Paris, with well-merchandised outfits — say, a brown suede jacket with canvas ties over a deep red bandana top with white fringe and an asymmetrical black skirt. Or a romantic white cotton blouse with a white slim skirt fringed in black and worn with gladiator heels. The tailoring looked sharp and the colors and almost folkloric patterns were consistent with Altuzarra’s style.

But the collection would have benefitted from more lightness — mostly in attitude. Altuzarra had some lovely crochet pieces, a crisp white cotton, and that bandana print (which he weirdly covered in black fishnet). Why not make a simple, beautiful summer dress or skirt out of the cotton, with sandals? He’s really good at blouses and slinky shirtwaist dresses. Again, he could have shown more of those.

It’s a small complaint, really. Assuming Altuzarra plans to continue showing in Paris, it will be interesting to see how the more competitive fashion atmosphere here shapes his thinking. 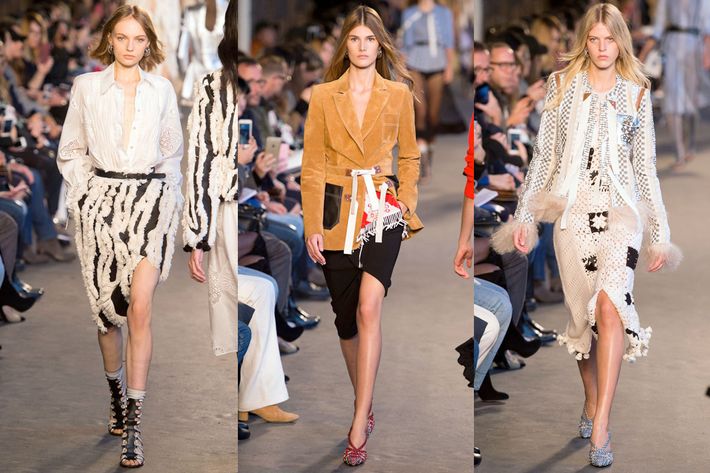 engagements 2 mins ago
AOC and Riley Roberts Are Engaged For once, some good political news.
power 26 mins ago
States Are Scrambling to Restrict Abortion Access With the Supreme Court expected to rewrite abortion rights, conservative states are advancing increasingly extreme bans.
are u coming? 2:45 p.m.
Rockin’ Out With the Mayor and ‘Late-Night Dorinda’ at the New Hard Rock Hotel Don’t expect Sid and Nancy; it’s pretty swanky.

law & order 2:07 p.m.
Would You Go to Anna Delvey for Legal Help? The infamous scammer is allegedly starting a law firm.
celebrity 2:02 p.m.
Rihanna Reportedly Had Her Baby According to TMZ, she gave birth to a baby boy.
obsessive tester 12:30 p.m.
19 Best Leave-in Conditioners for Hair That Just Can’t Anymore Softer, smoother, and shinier hair is just a spritz (or squirt) away.
By Erica Smith and Bianca Nieves
graduation (taylor's version) 12:24 p.m.
Who Said It: Taylor Swift or a Fortune Cookie? “Learn to live alongside cringe” and other wise advice from her NYU commencement speech.
style 11:36 a.m.
Hey Fashion Friend: Help! I’m About to Be So Sweaty There’s nothing wrong with sweating, but here are some tips for making it less uncomfortable.
celebrity 11:13 a.m.
Harry Styles Says Olivia Wilde Was ‘Very Helpful’ on Set He told Howard Stern he had “a wonderful experience” being directed by her in Don’t Worry Darling.
life after roe 11:00 a.m.
I, Too, Have a Human Form In Justice Alito’s draft opinion, the pregnant body is erased.
my two cents 10:00 a.m.
I Love My Teaching Job, But It Doesn’t Pay Me Enough Your options aren’t easy. But neither is squeaking by without enough money to do the things you want.
By Charlotte Cowles
motherhood 8:00 a.m.
A Model With a C-section Scar Is in the 2022 Sports Illustrated ‘Swimsuit’ Issue For the first time in the magazine’s 58-year history.
lawsuits Yesterday at 5:18 p.m.
Amber Heard Says She Thought Johnny Depp Would Kill Her A makeup artist explained how she covered Heard’s bruises.
shopping Yesterday at 5:05 p.m.
14 Brands Getting Plus-Size Swimwear Right Here’s where to shop.
closings Yesterday at 4:51 p.m.
Bye-Bye, Bite Beauty After a decade in business, the brand is shutting down.
"size inclusivity" Yesterday at 3:40 p.m.
Victoria Beckham Says Wanting to Be Thin Is ‘Old-Fashioned’ Then why does her line only carry dresses up to size 14?
the most fertile man Yesterday at 3:38 p.m.
Nick Cannon Says He’s Considering a Vasectomy “I ain’t looking to populate the Earth completely.”
power Yesterday at 1:35 p.m.
Fans Are Spending Thousands to See the Depp v. Heard Trial Some traveled cross-country, camping outside the Virginia courthouse for the chance to be among the trial spectators.
shopping Yesterday at 1:16 p.m.
17 Fisherman Sandals That Are Actually Cute No bait required.
sober questioning Yesterday at 12:00 p.m.
‘I Got Sober by Mistake — Can I Go Back to Drinking?’ That’s up to you. But give yourself credit: It wasn’t an accident, it was your choice.
By Ana Marie Cox
More Stories