This week, women’s social club The Wing launches No Man’s Land, its first print magazine, with stories rolling out exclusively on the Cut.

When Nora Ephron died in 2012, she left her family and closest friends with a memento — a self-published compilation of recipes she’d put together over the years. Bound with white spiral wire, it contains 174 pages of unpublished recipes and observations. Those who have a copy guard it closely.

Ephron still comes up again and again in both cultural and personal conversation for her assessments of modern love and life. No one doubts that Ephron knew love (“Don’t cry, Shopgirl. Don’t cry.”) or that Ephron knew human behavior (“Men and women can’t be friends because the sex part always gets in the way.”), but people often overlook that Ephron knew food.

While she rejected the idea of writing a cookbook, Ephron started her cinematic career with a culinary-heavy focus. In 1986, she published her fictionalized memoir Heartburn, which tells a story of divorce and betrayal peppered with recipes for lima beans with pears and multiple variations on potatoes.

When the book went to the screen, we watched Meryl Streep and Jack Nicholson’s marriage fall apart over roast chicken legs and glass mugs of bellinis. It was devastating, sure, but everything looked delicious.

We’ve been given the exclusive honor of printing Nora’s recipe for Monkey Bread. You can say it’s from the kitchen of Ephron, who once wrote: “I have made a lot of mistakes falling in love, and regretted most of them, but never the potatoes that went with them.” 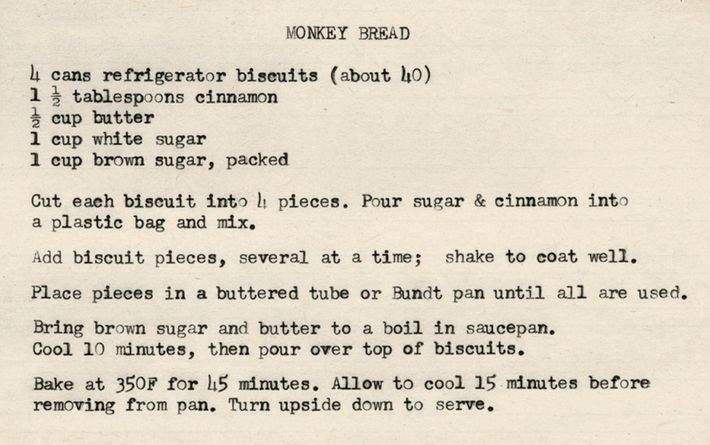 A Long-Lost Recipe From Nora Ephron

celebrity 5:41 p.m.
We Support the Statement Thong Thank you to Doja Cat for championing this look.
sexual misconduct 4:19 p.m.
Deshaun Watson Suspended Over Sexual-Misconduct Allegations Following an appeal, the quarterback was fined $5 million to be donated to organizations that prevent sexual assault.
but why tho 4:03 p.m.
Kourtney Kardashian Really Loves a Bathroom Photo Shoot Her latest photo dump includes way too many urinals.
wait what is happening on tiktok? 4:00 p.m.
The Kids Are Stealing Cars on TikTok Now Meet the “Kia Boyz.”
model behavior 1:59 p.m.
Linda Evangelista Returns to Modeling in British Vogue The model posed for her first major fashion cover since revealing she was permanently disfigured from CoolSculpting.
collaboration station 12:47 p.m.
Welcome to the Inside of Ye’s Mind. He’s Making ‘No Apologies.’ Here’s a look inside Yeezy x Gap’s Times Square takeover.
marriage 12:41 p.m.
The World Will Soon Have Two Taylor Lautners The Twilight star says his fiancée, also named Taylor, will take his last name.
life after roe 12:39 p.m.
What Abortion Actually Looks Like Two doulas set out to demystify the process by documenting their clients’ experiences.
By Megan Paetzhold
celebrity weddings 11:20 a.m.
Bennifer Is Getting Married (Again) The follow-up party to their small Vegas wedding is happening this weekend in Georgia.
celebrity 11:03 a.m.
Amy Schumer’s Mental-Health Parody Did Not Go Over Well She has since clarified that she did not intend to mock Tom Holland.
the internet 11:00 a.m.
The Beginning of the End of Millennial Discourse No one is talking about what they think they’re talking about.
By Michelle Santiago Cortés
divorce 10:50 a.m.
Alexis Bledel and Vincent Kartheiser Are Getting Divorced The couple met on the Mad Men set in 2012.
fashion friend 10:00 a.m.
Hey Fashion Friend: I Want to Shop Sustainably and Affordably Here’s how to spend less while shopping sustainably; brands include Everlane, Lacausa, Girlfriend Collective, and more.
sustainability 8:00 a.m.
Nadya Okamoto Wants to Talk About Periods The 24-year-old founder of sustainable period-care brand August breaks down the stigma about periods and the importance of sustainability.
mental health Yesterday at 7:49 p.m.
Jonah Hill Takes a Break From Press Tours Due to Anxiety He directed and starred in an upcoming documentary, Stutz.
lawsuits Yesterday at 5:24 p.m.
Unpacking Angelina Jolie’s Lawsuit Against the FBI Jolie is suing the agency for allegedly withholding records from its 2016 investigation into Brad Pitt.
hot goss Yesterday at 4:53 p.m.
Rachel Bilson Misses What About Bill Hader? At least she’s honest.
polio Yesterday at 4:49 p.m.
Here’s What We Know About Polio in New York Experts say this could mean hundreds of cases circulating, but the risk to vaccinated people remains low.
By Katie Heaney
celebrity Yesterday at 4:25 p.m.
How Many Tattoos for Your Wife Is Too Many? Brooklyn Peltz Beckham is trying his hardest to find out.
santa can you hear me? Yesterday at 3:01 p.m.
Mariah Carey Is Feuding With Her Fellow Christmas Queens They have not taken kindly to her attempt to trademark “Queen of Christmas.”
More Stories