How to Prep for a Gala Like a Rising Star

Getting ready with Sophie Auster. 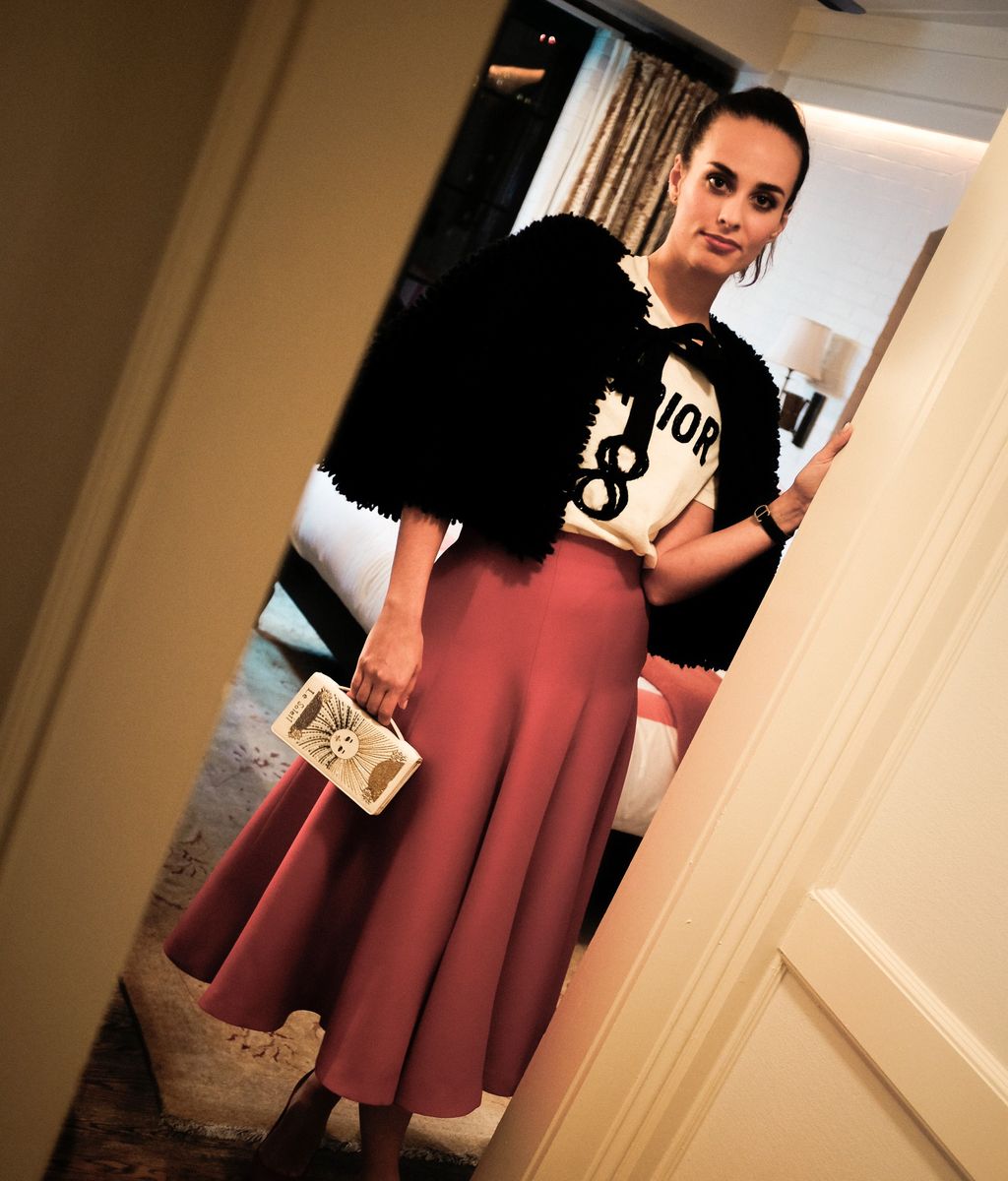 Singer-songwriter Sophie Auster loves a good suit. “It makes me feel more powerful,” she says. Her androgynous style matches the cabaret aesthetic of her music. Fellow suit-wearer Marlene Dietrich is one inspiration, though she’s also been compared to Fiona Apple.

For Dior, though, Auster will make an exception. When I entered her room at the Bowery Hotel on Wednesday, she was prepping for the brand’s annual Guggenheim Gala Pre-Party in long red skirt, red heels, and red lipstick. Makeup artist Gina Daddona was sweeping DiorBlush in “My Rose” onto her cheeks as music from the Talking Heads sifted through the room. Moody vibes? This must be the place.

The Brooklyn native — daughter of writers Paul Auster and Siri Hustvedt — says she usually wears “little to no makeup,” but last night she had on a colorful smoky eye from Dior’s Hypnotize palette. It was more of an onstage look, she said — the kind she’d try “when I want to stand out.”

Auster, who has two albums behind her, has been spotlighted as one of W Magazine’s rising stars and featured in T magazine. She’s always been an original, she told me: “I was one of those kids who didn’t like trends when they were happening. ” This has carried over to her adult life. She hasn’t even come near the new Taylor Swift album (“I’m blissfully ignorant when it comes to the T-Swifters”), and her cabaret-like music stands apart from what so many other contemporary artists are doing.

For the past two years, Auster has been writing songs for a new record, Next Time, with the Swedish-based Grammy-winning producer Tore Johansson. It will come out sometime next year. The Cut sat down with her to discuss her androgynous stage style, the beauty product she was sucked into buying on Instagram, and Anna Karenina.

Who’s your musician style icon?
I would say my style icon for performing is Marlene Dietrich, because of her suits. She sang, but she’s not really categorized as a musician. When I perform, I always wear suits. And I love that kind of androgynous feel. It makes me feel more powerful than, say, performing in a dress or a skirt.

When did you first discover her?
I think as a kid. I started wearing suits pretty regularly, like as a uniform, about five years ago. I was trying to find a style for myself, actually — a look that fit the music I was doing. I tried a bunch of things out. I went kind of punk-rock, which really doesn’t work with the type of music I’m making. You know: ripped jeans, and T-shirts and a lot of eye makeup, but that didn’t really work. Then I tried cute little dresses, but I felt too feminine. And then almost nondescript outfits: very simple, not much going on. And then I thought that if I wore very tailored suits onstage, it would make a good statement. And I never looked back! You can always think of cool new suits to get. Zadig & Voltaire makes a lot of cool suits.

What’s your nighttime skin-care routine?
It’s gotten very serious as I’ve gotten older, actually. I always wash my face, come hell or high water. The truth is that I’ve become one of those people that gets sucked into advertising on Instagram. I saw this thing called the SiO SkinPad that’s supposed to prevent wrinkles. You put it on your face and it sticks in the moisture. I’ve been going to sleep with this crazy shit on my face. My boyfriend leans over and is like, “Oh my god, what is on your face?” and I’m like, “Yeah, but in the morning, I’m going to look so amazing.” I think it works. And if it doesn’t work, I’m having a very pleasurable placebo effect.

What’s your best beauty trick and who taught you it?
We’re not too fussy in my family. The women in my family are pretty low-key. The best trick I did for myself is to quit smoking. I think the best advice is not too much sun, and don’t smoke.

What do you think of the phrase “self-care” and what do you do for it?
We are our own worst critics. I think in those moments, I try to take a step back and do something as simple as taking a walk, or opening something up that inspires me.
This sounds a little corny, but if I’m feeling kind of upset, I’ll turn to something that’s inspiring to me, like a favorite book or a favorite poem. It grounds me back into feeling better about myself.

What’s your favorite book?
A book that made an impact on me was Anna Karenina. I love old Russian classics. Turgenev, and Crime and Punishment, and all this shit, I adore it.

What’s your current favorite thing to watch on Netflix?
Alias Grace. The Margaret Atwood adaptation, done by Sarah Polley. I was away in Denver playing a show, and I binge-watched the entire thing.

Favorite way to be cozy this winter?
Red wine and food, I would say, is a good way to be cozy. Throw some chocolate in there, and you don’t even need sex.

Are people scared to sing around you?
When people sing around me, they’re usually drunk. I think their fears and inhibitions have gone out the window. It’s usually some karaoke bar, and I’m usually getting the mic taken away from me.

What’s your favorite guilty-pleasure song?
I was on Spotify and found this girl named Dagny, she’s Norwegian, and she has song called “Love You Like That.” I was looking for a running playlist, and it’s a good song to run to. It’s an ear worm.

As a New Yorker, what’s your favorite venue for performing in New York?
I think the Bowery Ballroom is really great. The Highline Ballroom is also really fun. People are very attentive and rapt.

Hair up or down onstage?
Either two buns on the sides and up. Or down.

How to Prep for a Gala Like a Rising Star
in sickness and in health Yesterday at 7:56 p.m.
Travis Barker Is Feeling ‘Much Better’ He said he was hospitalized with “life-threatening pancreatitis” after an endoscopy went wrong.
fourth of july Yesterday at 3:54 p.m.
Highland Park Shooting Leaves 6 Dead, Dozens Injured Police are still searching for the suspected shooter.
extremely online Yesterday at 3:30 p.m.
I Can’t Shut Up About the Barbie Movie Each behind-the-scenes look is a sparkly pink hit of nostalgia and dopamine.
By Mia Mercado
celebrity Yesterday at 1:51 p.m.
Halsey Reflects on the Abortion That Saved Their Life “My abortion saved my life and gave way for my son to have his.”
wait what is happening on tiktok? Yesterday at 10:00 a.m.
Why Does TikTok Want Me to Use My Vagina for Perfume? It’s called “vabbing,” obviously.
how i get it done Yesterday at 7:00 a.m.
How Juliette Binoche Gets It Done The actress tells the Cut about almost drowning while filming, her favorite chocolat, and why she doesn’t watch movies before bed.
By Jenna Mahale
astrology July 3, 2022
Madame Clairevoyant: Horoscopes for the Week of July 4 Late Monday night, action planet Mars enters Taurus and invites us all to settle in for a long haul.
By Claire Comstock-Gay
sex diaries July 3, 2022
The Queer Divorcé Exploring Polyamory This week’s sex diary.
lawsuits July 3, 2022
Amber Heard Asks the Court to Set Aside the Defamation Verdict A new filing from her attorneys claims the verdict was not supported by evidence.
celebrity July 3, 2022
Ricky Martin Denies Allegations Resulting in a Protective Order A rep called the allegations “completely false and fabricated.”
congrats! July 3, 2022
Lindsay Lohan Is Now a Married Woman “I am the luckiest woman in the world.”
day in the life July 1, 2022
The Anti-Wedding Wedding Planner Everything it takes to throw a “love party.”
for your consideration July 1, 2022
The Best Way to Spend the 4th of July Tips for enjoying the long weekend when you’re not in the mood to celebrate America.
parties! July 1, 2022
Selena Gomez, Emily Ratajkowski, and More of the Bestest Party Pics This Week This week: Marc Jacobs’s fall 2022 presentation, NFT parties, and Pride celebrations.
instagram worthy July 1, 2022
Expensive Elopements Are the New Dream Wedding The more elaborate — and exclusive — the better.
By Kate Willsky
fashion July 1, 2022
Virgil Abloh’s Vision, on Full Display at the Brooklyn Museum We chatted with “Figures of Speech” curator Antwaun Sargent, who worked on the exhibition with Abloh before the designer’s death.
power July 1, 2022
Everything to Know About the WNBA Star in Russian Custody Legal experts say Brittney Griner’s trial is likely to end in conviction.
explosions July 1, 2022
Goop Candles Continue Their Campaign of Terror in the Hamptons Two men reportedly caught fire in a Sag Harbor Goop store.
gone sale-ing July 1, 2022
Your July 4 Sale Shopping Guide That NuFACE you wanted? It’s on sale.
rsvp yes July 1, 2022
Winning the Wedding-Season Marathon How guests with fully booked weekends are getting through it all. (Excel, mostly.)
By Emilia Petrarca
More Stories