Zanele Muholi, a photographer who considers herself more of a “visual activist.” 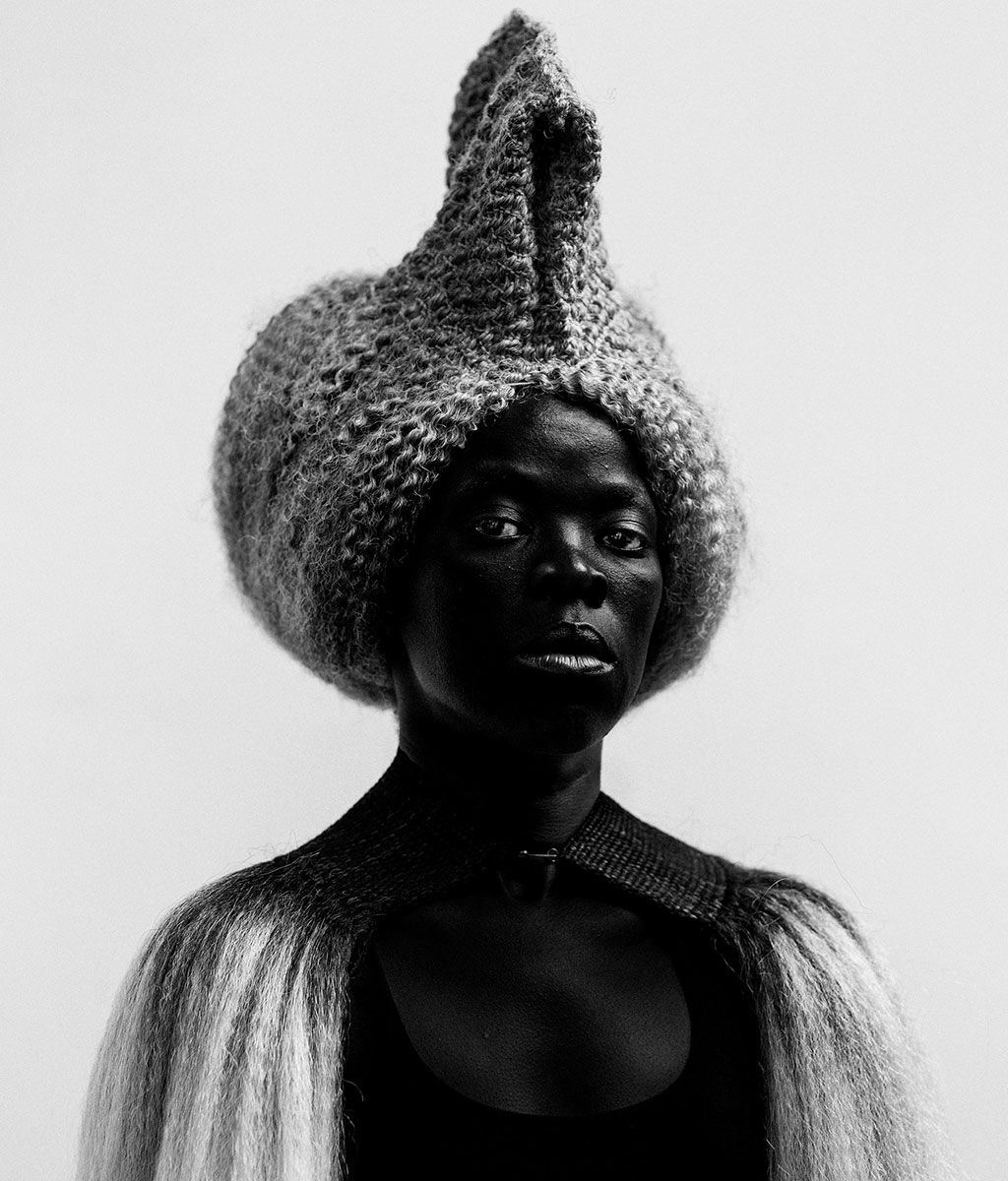 The South African artist Zanele Muholi’s self-portraits seem familiar at first: a sullenly glamorous, steady-eyed, dark-skinned woman, dressed up in what could be a nearly National Geographic vision of Third World exoticism. Except — wait, is that necklace made out of clothespins? And what is that pythonlike thing wrapped around her neck? “My travel pillows,” she says, laughing, when we talk in November in New York, where her work is on display at Yancey Richardson Gallery. “Turned back to front.” The effect is beautiful, playful, and disarming, but it’s the stories they tell that matter most to Muholi: The one with the jeweled tiara, for instance, is a reference to how, until apartheid ended in 1991, only white women could be crowned Miss South Africa (nonwhite women could become Miss Africa South). The clothespin necklace is a tribute to her mother, who worked as a domestic.

The photographs are part of a series Muholi, who is 45 and lives in Johannesburg, has been working on since 2012, titled “Somnyama Ngonyama,” which translates as “Hail the Dark Lioness.” I met her recently in the basement club at the Public Hotel, with her crew of 23, whom she’d brought along from South Africa (“For me, it is very important for them to see New York and the art scene here,” she says). Together, they put on a boisterous queer revue of singing, posing, and poetry. She was dressed in all black, with a bowler hat. Muholi calls herself a “visual activist,” and she first became known internationally for a series of portraits of queer South Africans — mostly black lesbians — called “Faces and Phases,” which she started in 2006. That project documented their exclusion from the postapartheid visual history of the country and insisted on their inclusion. Alongside her gallery show, her photographs can be seen in six subway stations around the city, from Soho to the Bronx, and in Times Square, as part of the Performa arts festival. That public display is important to Muholi — it’s a way of restoring her subjects’ dignity: “My photography is a therapy to me.”

*A version of this article appears in the November 13, 2017, issue of New York Magazine.

*This article has been updated throughout since originally published.

The Photographer Who Considers Herself a ‘Visual Activist’
shopping Yesterday at 4:27 p.m.
The $6 Brow Product That Changed My Eyebrows It took me almost a decade to find the perfect brow product.
obits Yesterday at 3:04 p.m.
Anne Heche Has Died at 53 The actor suffered severe injuries after a car crash in L.A. earlier this month.
fashion Yesterday at 3:00 p.m.
Julia Fox Is Back! And she is giving us the latex looks we’ve been so thirsty for.
feminism Yesterday at 2:05 p.m.
Who Actually Lost the Sex Wars? And were there any winners? A conversation with Christine Emba, Nona Willis-Aronowitz, and Lorna Bracewell.
friday sales Yesterday at 1:49 p.m.
19 Things on Sale You’ll Actually Want to Buy: From Ninja to Isabel Marant Including the most effective foot peel and some Chuck 70’s for just $35.
i'd buy that Yesterday at 1:37 p.m.
Drop Everything, Joan Didion’s Estate Sale Is Coming How much would you pay for a mohair throw that once graced her couch?
do i need this? Yesterday at 1:28 p.m.
Do I Need Lori Harvey’s Gym Outfit? I couldn’t get with Pilates, but this I can do.
breakups Yesterday at 12:35 p.m.
Michelle Branch Announces Her Separation From Black Keys’ Patrick Carney Branch was arrested for misdemeanor domestic assault shortly after the announcement.
selling sunset Yesterday at 11:35 a.m.
Looks Like Jason Oppenheim Has Also Moved On Surprise: His new girlfriend isn’t an O Group agent.
celebrity Yesterday at 11:15 a.m.
Kim Kardashian Bravely Takes Shot On-Camera Behold, the face of someone who’s made a huge mistake.
extremely online Yesterday at 11:09 a.m.
I Can’t Shut Up About This Photo of Austin Butler’s Girlfriends Vanessa Hudgens and Kaia Gerber met each other long before they both dated Butler.
5 questions with... Yesterday at 11:09 a.m.
Chanté Adams Is Redefining A League of Their Own The star hits a home run in Prime Video’s new series.
parties! Yesterday at 10:46 a.m.
Beyoncé, Remi Bader, and More of the Bestest Party Pics This Week Celebrating the release of Renaissance, the launch of the Remi x Revolve collab, and more.
seeing someone Yesterday at 8:00 a.m.
Help! Both Women I’m Seeing Want to Be Instagram Official You don’t have to “launch” a relationship if you don’t want to.
By Randa Sakallah
style Aug. 11, 2022
Hey Fashion Friend: How Do I Wear Fashion Cargo Pants? We provide you with 15 non-ironic pairs to go with your tiny shirts.
anne heche Aug. 11, 2022
Anne Heche in a Coma, Under DUI Investigation, Following Car Crash According to a representative, she has remained in a coma since shortly after the accident.
ugh why Aug. 11, 2022
Britney’s Lawyer Has Some Words for Kevin Federline “Britney Spears is a brilliantly talented, extremely hardworking icon … The same, unfortunately, cannot be said about Mr. Federline.”
sigh Aug. 11, 2022
Male Actor Doesn’t See the Point of Intimacy Coordinators Emma Thompson and Kumail Nanjiani disagree.
5 questions with... Aug. 11, 2022
Gugu Mbatha-Raw Takes on the Neo-Noir In Surface, she plays an amnesiac trying to uncover her truth.
wtf Aug. 11, 2022
Watch Kathy Hilton Learn Lizzo Is Not Gabourey Sidibe It’s as cringe as it sounds.
More Stories