Meghan Markle’s fiancé, a former solider and capital-P Prince named Harry, had quite the year. Imagine: After a phenomenal gap year in 2016 — during which he gave speeches on women’s equality, got really into volleyball, and helped kids — 2017 was even better. This year he opened up about his struggles with mental health, met Paddington Bear, and yes, he got engaged! Look back on the royal’s greatest moments here.

1. He opened up about losing his mother.

Defying the typical Brit’s stiff upper lip, Prince Harry told the Daily Telegraph in an interview that he has sought counseling to help with his grief over losing his mother, Princess Diana.

“I can safely say that losing my mum at the age of 12, and therefore shutting down all of my emotions for the last 20 years, has had a quite serious effect on not only my personal life but my work as well,” he said. “I have probably been very close to a complete breakdown on numerous occasions when all sorts of grief and sort of lies and misconceptions and everything are coming to you from every angle.”

2. He had his first (kind of) public kiss with Meghan Markle.

While playing in a polo match for charity, Prince Harry and Meghan Markle shared a clandestine kiss that was captured (perhaps incidentally) by the paparazzi. It was also the first time they appeared together at a public event, even though they were separated for most of it by a polo field.

3. He gave Meghan Markle time to get used to the royal family.

In May, a source told People that Prince Harry had not proposed yet because he wanted to give Markle time to “acclimatize” to royal life. So considerate! So sensitive! Such a good boyfriend!

4. He texted Will Arnett back.

Prince Harry would never ignore your text! Will Arnett revealed that, casually, he was in London and passed Buckingham Palace and thought “Oh, maybe Harry’s home. I should text him.” The pair met up and lived happily ever after.

5. He admitted he once “wanted out” of the royal family.

And explained why he changed his mind. “I felt I wanted out but then decided to stay in and work out a role for myself,” he told the Daily Mail. “We don’t want to be just a bunch of celebrities but instead use our role for good.”

6. He went on a safari with Meghan!

Prince Harry took Meghan Markle on a safari through southern Africa for her 36th birthday, setting off a slew of engagement rumors. Here’s the couple touching down in Botswana; Prince Harry did conservation work there and supports at least eight other charitable initiatives, according to his official website. 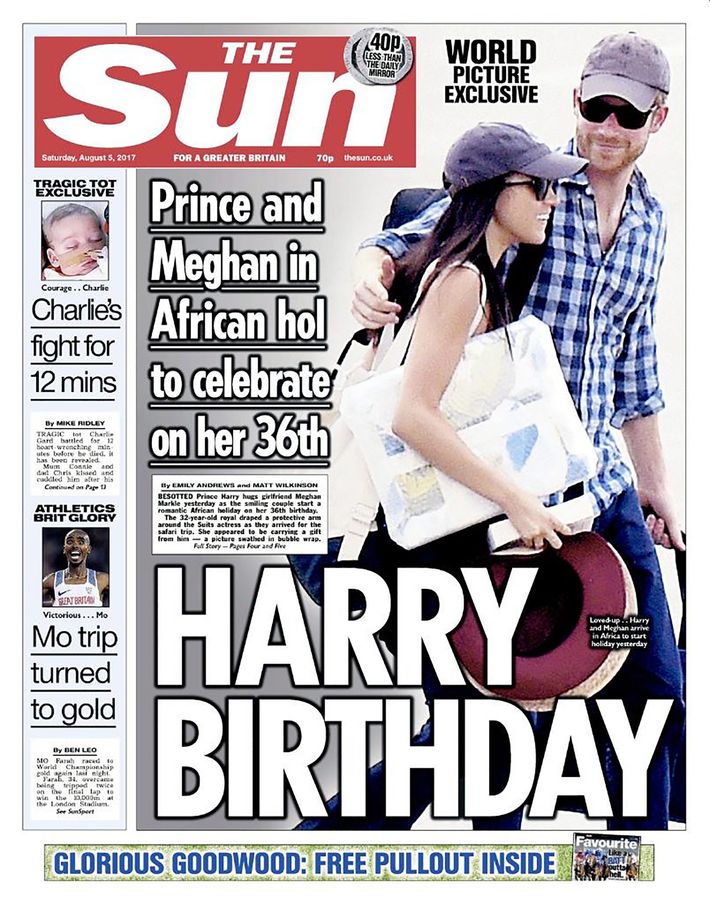 At the Invictus Games, he held Meghan Markle’s hand for the first time in public at a wheelchair tennis match.

8. He let a little girl steal his popcorn!

The undisputed star of the Invictus Games was the toddler who helped herself to Prince Harry’s popcorn. This may be Harry’s best moment of the year:

A toddler takes popcorn from Prince Harry during the #InvictusGames. What happens when he realises what's going on? https://t.co/XKV051JCx8 pic.twitter.com/SX975rSipp

9. He had his second public kiss with Meghan Markle!

Okay, back to Meghan. The two shared their second public kiss in October, a mere month before they were engaged. Harry kissed her on the cheek in her box at the Invictus Games. Aww.

10. He looked so incredibly happy to meet Paddington Bear.

Paddington Bear may have danced with Kate Middleton, but Prince Harry looked the happiest to shake hands with the most fashionable stuffed bear around. Swoon.

11. He visited South Side Chicago schools with Michelle Obama.

Prince Harry and Michelle Obama showing up at your school? What could be better??

No list would be complete without *this* moment, when Prince Harry proposed to America’s very own Meghan Markle, fulfilling and crushing our dreams.

The Prince of Wales is delighted to announce the engagement of Prince Harry to Ms. Meghan Markle. pic.twitter.com/zdaHR4mcY6

An underreported moment in this Year of Harry was when the Prince went to workout in a groutfit, one day after announcing his engagement. Relatable!

Of all the questions you could ask Prince Harry after the engagement, one of the most pressing questions (from a fellow ginger) was, “How does it feel being a ginger, with Meghan?” He knows how “great” it is!

Video: Hilarious from a red-headed member of the crowd asking Harry how it felt to be with #Meghan 'as a ginger'. 'It's great, isn't it?!' He replied. #Harry #Meghan pic.twitter.com/taPpdytTVJ

He may not have given BB-8 the pep talk that Laura Dern did, but Prince Harry proved once again that he’s really charming even when greeting robots.

16. He and Meghan made the wedding date official.

Here’s to next year!

The Year in Prince Harry

gone sale-ing 12:00 p.m.
Your July 4 Sale Shopping Guide That NuFACE you wanted? It’s on sale.
rsvp yes 11:00 a.m.
Winning the Wedding-Season Marathon How guests with fully booked weekends are getting through it all. (Excel, mostly.)
By Emilia Petrarca
the kardashians 10:30 a.m.
I Can’t Shut Up About ‘Krissing’ A TikTok trifecta: Kris Jenner, catchy audio, and being obnoxious.
By Mia Mercado
allegations 10:23 a.m.
All the Allegations Against Ezra Miller In the past few months, the actor has been arrested twice, repeatedly accused of physical assault, and accused of brainwashing a minor.
life after roe 10:14 a.m.
Are Social-Media Platforms Censoring Information About Abortion? Facebook and Instagram have been restricting and removing posts intended to help people seeking reproductive care.
encounter 8:00 a.m.
Becca Tilley Gets Her Rose Coming out to Bachelor Nation wasn’t easy, but it sure felt good.
By Katie Heaney
the grub street diet 6:00 a.m.
Rachel Antonoff Names Her Pies “I’m like, ‘Do you prefer Bob or Judy?’”
By Rachel Sugar
crime Yesterday at 5:58 p.m.
A Mother Pushing a Stroller Was Shot and Killed in Manhattan Investigators say 20-year-old Azsia Johnson was shot at “very close range” while on the Upper East Side Wednesday night.
5 questions with... Yesterday at 4:43 p.m.
Saucy Santana on the Formula for Going Viral Santana makes viral videos in one take. He does so by staying true to himself.
the body politic Yesterday at 4:00 p.m.
The Abortion Stories We Didn’t Tell How decades of silence left us unprepared for the post-Roe fight.
By Rebecca Traister
pride Yesterday at 2:00 p.m.
‘I’m Trying to Focus on the Joy’ Celebrating 20 years of Pride in St. Petersburg amid Florida’s anti-LGBTQ+ crusade.
By Ashley Dye
that's hot Yesterday at 1:19 p.m.
Paris Hilton Has Her Priorities Straight No president is more important than Britney, bitch.
trendspotting Yesterday at 1:00 p.m.
The Bride Who Didn’t Care Meet the too-cool-for-tradition aesthetic.
By Laura Pitcher
power Yesterday at 12:40 p.m.
Ketanji Brown Jackson Is Officially a Supreme Court Justice She was sworn in on Thursday, becoming the first Black woman to ever serve on the bench.
celebrity Yesterday at 12:40 p.m.
The Investigation Into Meghan Markle Bullying Claims Is Over The findings will not be made public.
life after roe Yesterday at 12:00 p.m.
What Makes People Change Their Minds About Abortion? Pro-choice evolutions can take years, a timeline that feels painfully slow in this post-Roe moment.
life after roe Yesterday at 11:40 a.m.
The Uphill Battle to Codify Roe v. Wade President Biden has called on Congress to make an exception to the filibuster rule so it can reinstate federal abortion protections.
my two cents Yesterday at 8:00 a.m.
How to Find a Financial Adviser And how to know if you really need one.
By Charlotte Cowles
life after roe June 29, 2022
Some Hospitals Have Already Stopped Providing Plan B A health system in Missouri says it has stopped providing emergency contraception until the state’s abortion ban is “better defined.”
don't call it a comeback June 29, 2022
Cameron Diaz Is Coming Out of Retirement With a little help from Tom Brady.
More Stories