“The T-shirt is deliberate,” wrote Richard Goldstein in 1973 for a New York article on the subject, which was re-printed in the magazine’s 50th anniversary book this year. “You can use it to tell people a great deal about your class, your city of origin, and what you like in bed.”

Forty-four years later, the same can be said of the sartorial genre we now call the “graphic T-shirt.” But in 2017, people aren’t just talking with their T-shirts, they’re screaming. Popular slogans, usually written in all-caps, can reveal everything from our relationship to gender politics (“Nasty Woman” or “Feminist AF”) to which Soundcloud rappers we follow. There’s almost nothing that hasn’t been said, either consciously or subconsciously, on a T-shirt.

T-shirts were originally worn as undergarments, meant to seen by no one. It wasn’t until the 1960s and ’70s that slogan T-shirts began to emerge in popular culture, along with political protests, band tees, and a general desire to express oneself. What Goldstein wrote of this particular period reads eerily familiar today:

The T-shirt is a perfect fashion metaphor for the seventies. It seems spontaneous, but it is really premeditated. It seems democratic, but it is really chic. At a time when the style demands a studied exuberance, an informality which is prearranged, people turn to garments which project the harmlessness of children at play. But it’s a futile gesture, like going to war in lace. A T-shirt can make you sexy, but no fashion can make you feel innocent again.

This idea of “prearranged informality” is one that can easily be applied to both fashion and Instagram today, which is where so many of us (myself included) consume and promote graphic T-shirts. T-shirts are a blank canvas in a culture where we try to communicate huge, complex personal beliefs via carefully-curated images, viral hashtags, and 140 (sometimes 280) characters. In fashion, the T-shirt has also become an integral part of the current athleisure movement, replacing button-ups as we trade suits for more casual uniform. In other words, the T-shirt is a perfect fashion metaphor for 2017. 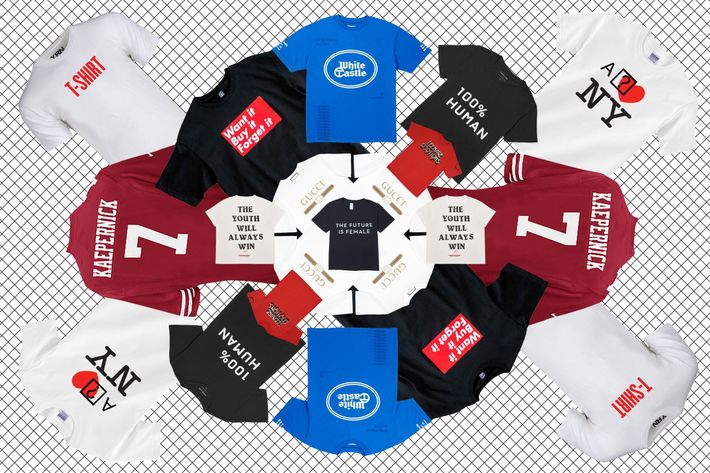 There was a lot to be said this year. Beginning in January with the Women’s March, millions of Americans took to the streets with their politically charged “the future is female” and “pussy grabs back” T-shirts. Meanwhile, Rihanna did her part by sharing Dior’s $710 “we should all be feminists” shirt on social media. By the end of the year, Dolce & Gabbana had flipped the trend on its head, parodying the political backlash it received with a $245 “#Boycott” T-shirt. For every sincere slogan, there was an ironic one to match.

In popular culture, merch proliferated beyond the work of musical artists this year, reaching from IKEA to outer space. Even Asahd Khaled, a 1-year-old baby, has his own merch. After the 21-year-old rapper Lil Peep died in November, merch was made posthumously in his name. This made me think that in 2017, T-shirts symbolized not only a futile gesture towards innocence, but also a grasp at immortality. I wear a T-shirt, therefore I am.

If nothing else, T-shirts told the story of 2017. Below, we attempted to sum up the entire year with 52 of the best, most-relevant graphic slogans.