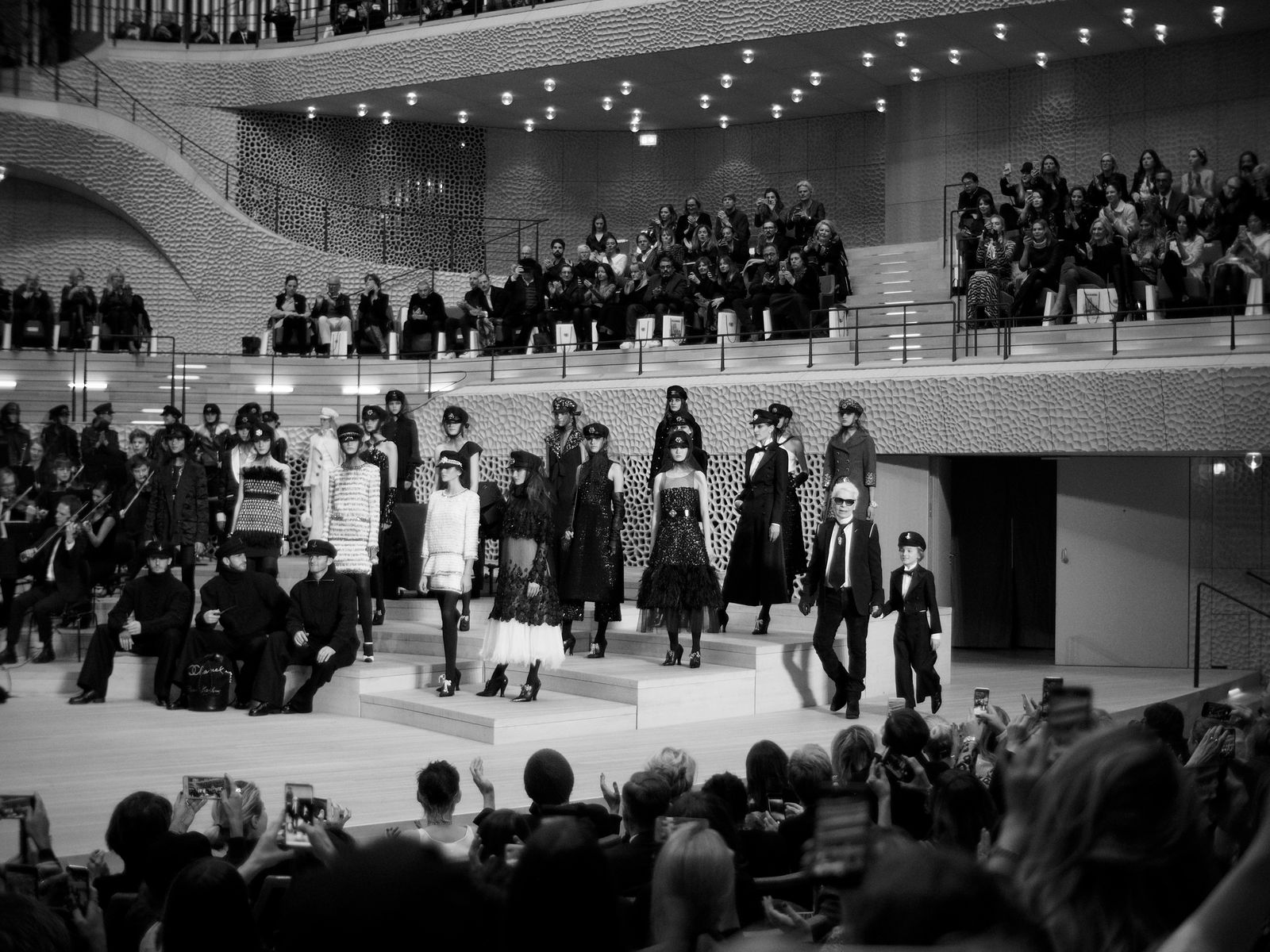 For the brand’s Métiers d’Art Show in Hamburg

During his time at Chanel, Karl Lagerfeld has earned his stripes as the unofficial king of Paris. But the 84-year-old designer is originally from Hamburg, Germany, where, believe it or not, his father owned a company that produced and imported evaporated milk.

On Wednesday, Lagerfeld took Chanel home to Hamburg for the first time ever, showing his Métiers d’Art pre-fall 2018 show inside the city’s stunning Elbphilharmonie concert hall. Designed by modern Swiss architects Herzog & de Meuron to mimic the waves of the Hamburg harbor below, the space comfortably housed Chanel’s over 1,400 guests, including Tilda Swinton, Kristen Stewart, and Lily-Rose Depp.

The Resonanz orchestra performed live as models like Kaia Gerber (Cindy Crawford’s daughter) snaked their way around the cylindrical space. In case you were seated in the “nosebleeds,” each seat was provided with opera glasses to take in the full view. Anna Ewers, a German model, opened the show in a black knitwear ensemble, complete with leg warmers, an accordion-shaped bag, and a wool sailor cap, or an elbesegler in German.

The collection as a whole was a nod to nautical themes, as Hamburg was once a popular port on the River Elbe. Men sported wide-leg sailor trousers and navy cable knits, while women wore wide collars, culottes, and stripes. Mod miniskirts and intricate knitwear were also sprinkled throughout, plus some elegant evening pieces with pearl bow heels and velvet tuxedos. For the finale, Lagerfeld came out with his favorite stylish child, Hudson Kroenig, who wore a mini-tuxedo himself.

Of course, Chanel wouldn’t bring guests like Tilda Swinton all the way to Hamburg without showing them a good German time. At the after-party to follow, guests were greeted by singing sailors at the entrance. Inside, musclemen arm-wrestled and there was even a station for anchor tattoos, if you wanted to surprise your friends and family upon returning home. Fish was served and Champagne, as well as beer, flowed all night. This, according to Karl Lagerfeld, is how you throw a homecoming party.

Chanel Brings Tilda Swinton and Kristen Stewart to Germany
action item 3:25 p.m.
How to Help the People of Turkey and Syria Two powerful earthquakes have killed more than 2,600 people.
power 2:00 p.m.
What to Know About the Protests in Iran Since Mahsa Amini’s death, Iranian forces have killed more than 500 protesters, including women and children.
is this flirting? 12:58 p.m.
Divorced Dad Experiments With Thirst Traps A newly retired Tom Brady is posting mirror selfies.
brooding 12:00 p.m.
What If You Just Didn’t Clean That Up? Our ideas about cleanliness are stuck in the mid-20th century. Today, women can afford to care less.
By Kathryn Jezer-Morton
:( 11:21 a.m.
Ben Affleck Plumbs New Depths of Existential Despair Not everyone had a nice time at the Grammys, but at least one man was honest about it.
hairy situations 11:00 a.m.
15 Ways to Convince Your Hair to Grow Faster and Longer It’s not just a waiting game.
By Erica Smith
grammys 2023 9:47 a.m.
Fans Are Still Processing That Beyoncé Snub Are Grammy voters okay?
rich people stuff 8:00 a.m.
The Fleishman Effect In a city of Rachels and Libbys, the FX show has some New York moms worried they’re the ones in trouble.
By Caitlin Moscatello
appointment viewing 8:00 a.m.
The Last of Us Is the Apocalyptic Tearjerker You Won’t Want to Miss Yes, that zombie-apocalypse show The Last Of Us is actually worth the hype.
how i get it done 7:00 a.m.
Misty Copeland Is Back in the Studio And preparing for her return to the stage since becoming a mother and authoring a memoir. Here, she shares how she gets it all done.
grammys 2023 Yesterday at 10:35 p.m.
The Best, Wackiest, and Most Tin Man–Like Looks From the Grammys Red Carpet No, Beyoncé did not walk the carpet, but Cardi B, Harry Styles, Lizzo, and Taylor Swift arrived in their sparkliest outfits.
grammys 2023 Yesterday at 10:20 p.m.
The 9 Grammys Beauty Looks We Are Re-creating ASAP Want inspiration for your GRWM? Doja Cat absolutely wins in the winged-eyeliner category.
grammys 2023 Yesterday at 8:55 p.m.
The Highlights and Disappointments of the 2023 Grammys From waiting for Beyoncé to Kim Petras’s historic win.
sex diaries Yesterday at 8:00 p.m.
The Tokyo Woman Flying to Milan for a Former Co-worker This week’s sex diary.
grammys 2023 Yesterday at 5:11 p.m.
Every Look From the 2023 Grammys Beyoncé, Taylor Swift, Harry Styles, Lizzo, Bad Bunny, Adele, Doja Cat, Jack Harlow, Mary J. Blige, Sam Smith, and more.
By Brooke LaMantia
astrology Yesterday at 8:30 a.m.
Madame Clairevoyant: Horoscopes for the Week of February 6 A full moon in Leo brings long-simmering feelings to the surface.
By Claire Comstock-Gay
grammys 2023 Yesterday at 12:05 a.m.
Beyoncé Just Broke a Grammys Record The night ended with an upset, but she still holds more awards than any other artist.
back in the press Feb. 4, 2023
13 Takeaways From Armie Hammer’s First Interview Since His Scandal He admitted to being emotionally abusive to his accusers, but claimed that all his sexual encounters were consensual.
parties! Feb. 3, 2023
Pauline Chalamet, Tessa Thompson, and More of the Bestest Party Pics This Week Partying with Guerlain, Marni, and more.
life after roe Feb. 3, 2023
The Future of Abortion Pills Is on the Line One Trump-appointed judge holds the power to effectively ban medication abortion even though the U.S. approves its use up to ten weeks into pregnancy.
More Stories