Early this morning, Senate Republicans passed a massive tax-overhaul bill that will most certainly exacerbate income inequality. Full of handwritten notes, the 479-page bill lists massive corporate tax cuts and repeals Obamacare’s individual mandate; but what the Senate version does not include that the House’s does is an irrelevant anti-abortion provision. However, the bills must now be reconciled, so it’s possible that the backwards provision could make its way into the cruel final bill.

According to ThinkProgress, the House bill moves to allow fetuses to be among the allowed beneficiaries of the popular 529 college-savings plans. What is particularly insidious about this provision, though, is that it attempts to redefine “unborn child,” a term that anti-abortionists throw out while arguing that personhood begins at conception. Their thinking goes that if they can legally define fetuses as people, then abortion will inevitably be outlawed. 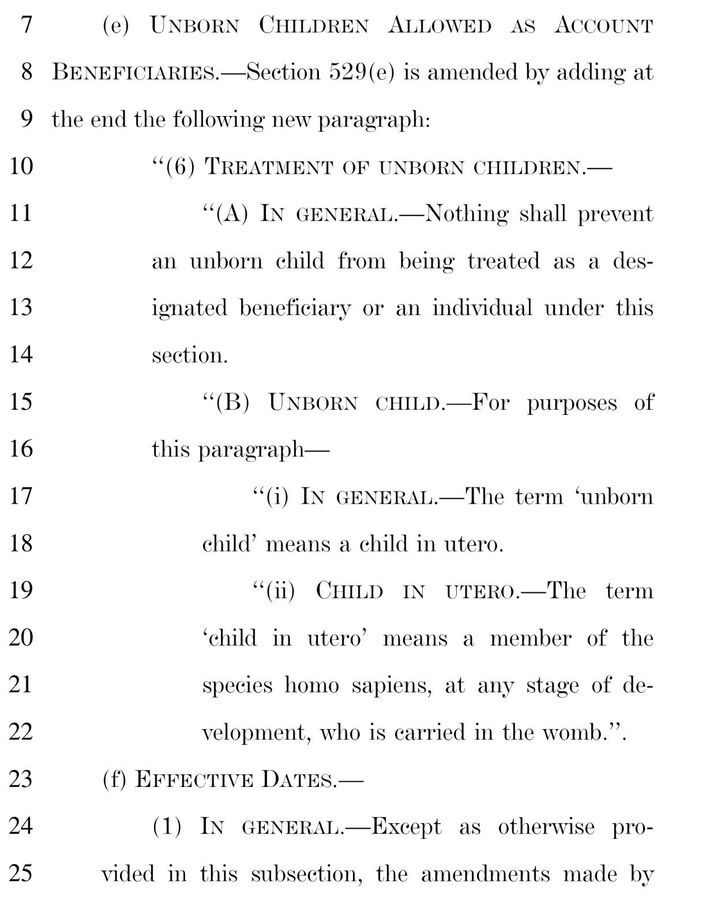 While Kansas and Missouri have “personhood” language on their books, other states, like Oklahoma, have struck down similar ballot initiatives and deemed them unconstitutional. However, it’s been a priority of anti-abortion activists to codify “fetal personhood” for years.

“It is absurd that House Republican leaders would use a tax bill to try to advance their agenda to undermine access to safe, legal abortion,” Dana Singiser, vice president of public policy and government affairs for Planned Parenthood Action Fund, told ThinkProgress. Furthermore, according to Planned Parenthood, current law already allows people to create 529 accounts for future children.

As for what’s next, the House and Senate will get together to try to negotiate a new draft and decide whether or not they have the energy to give the rich more money and threaten abortion rights. Once they have their final copy, both chambers will have to pass it again.

celebrity 29 mins ago
Amandla Stenberg Would Like a Word About ‘Cleavage’ “The amount of commentary that I receive on my boobs is so extreme.”
style 1:00 p.m.
Unpacking the Proverbial Suitcase of ‘Summer Girl’ Style OOO.
love and war 12:00 p.m.
I Will Never Share a Bank Account With My Husband I’ll give up my name, but never my financial independence.
By Christina Wyman
lawsuits 11:20 a.m.
Brad Pitt Settles Lawsuit Over Defective New Orleans Homes Residents of the shoddy houses his foundation built after Hurricane Katrina will receive $20.5 million for repairs.
extremely online 11:00 a.m.
I Can’t Shut Up About The Tyra Banks Show Her daytime talk show remains her most deranged masterpiece.
parenting 11:00 a.m.
The Unbearable Heaviness of Being an ‘Old Mom’ At 39, every physical ache, every existential spiral, every scroll past young momfluencer content makes me obsess over the time left.
By Amil Niazi
crime 11:00 a.m.
What to Know About R. Kelly’s Latest Sex-Abuse Trial The woman at the center of the singer’s 2008 trial testified that he sexually abused her on video when she was 14.
power 10:57 a.m.
Critics Scandalized Finnish Prime Minister Has a Social Life The 36-year-old leader is once again facing criticism for partying.
totally kind of hot 10:17 a.m.
I’m Horny For Nathan Fielder While critics have been busy dissecting The Rehearsal, I’ve simply been turned on.
style 10:00 a.m.
H&M Is Being Sued for Greenwashing. Why? Sustainability as a marketing tactic could go extinct. And maybe it should.
5 questions with... 9:07 a.m.
Sharon Horgan Wants to Get Out of Her Comfort Zone The Bad Sisters creator and star can’t help but try to do it all.
sustainability 8:00 a.m.
Where to Sell Secondhand Clothing: A Guide It’s not the RealReal.
life after roe 7:00 a.m.
The Abortion Clinics Staying Open in Hostile States Some providers are pivoting to offer gender-affirming care, birth services, and other aid patients won’t get at crisis-pregnancy centers.
¡hola papi! 6:00 a.m.
‘My Average Life Is Smothering Me’ You don’t need to blow the whole thing up. You just need a pressure valve.
By J.P. Brammer
celebrity Yesterday at 5:41 p.m.
We Support the Statement Thong Thank you to Doja Cat for championing this look.
sexual misconduct Yesterday at 4:19 p.m.
Deshaun Watson Suspended Over Sexual-Misconduct Allegations Following an appeal, the quarterback was fined $5 million to be donated to organizations that prevent sexual assault.
but why tho Yesterday at 4:03 p.m.
Kourtney Kardashian Really Loves a Bathroom Photo Shoot Her latest photo dump includes way too many urinals.
wait what is happening on tiktok? Yesterday at 4:00 p.m.
The Kids Are Stealing Cars on TikTok Now Meet the “Kia Boyz.”
model behavior Yesterday at 1:59 p.m.
Linda Evangelista Returns to Modeling in British Vogue The model posed for her first major fashion cover since revealing she was permanently disfigured from CoolSculpting.
collaboration station Yesterday at 12:47 p.m.
Welcome to the Inside of Ye’s Mind. He’s Making ‘No Apologies.’ Yeezy x Gap’s Times Square takeover.
More Stories