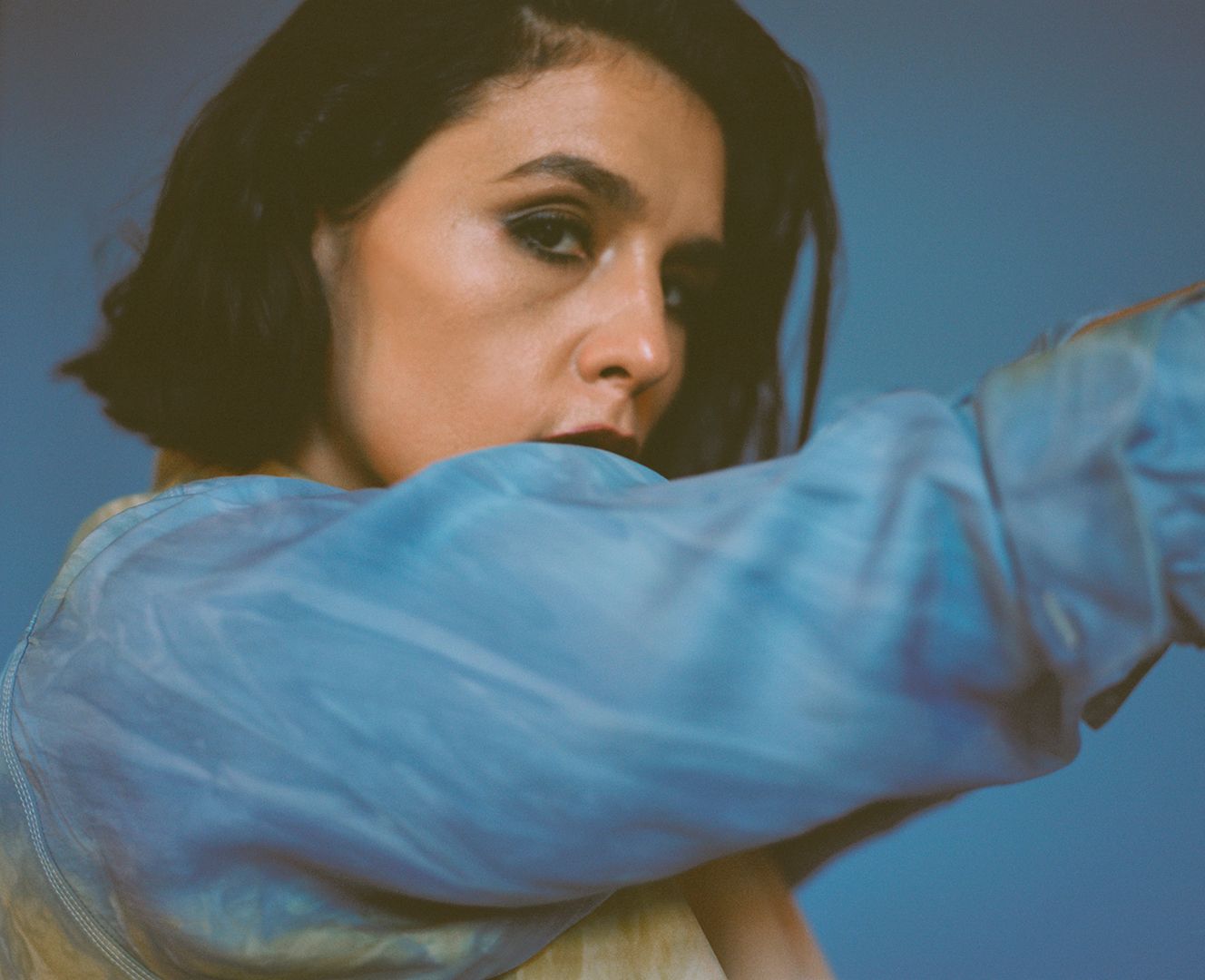 Jessie Ware’s Working on Being a Working Mom

“It’s like guilt and gin. That’s what I’ve learned about motherhood.”

If I were a baby, my ideal baby situation might just be sitting on the floor of a Brooklyn photo studio and watching Jessie Ware (in this scenario, Ware is my mom) twirl in a Céline outfit. In this scenario, should the mood strike, it would be perfectly acceptable to break free from Dad (Ware’s husband, Sam Burrows) and crawl right onto the photo scrim mid-shoot. Nobody would care that Ware’s daughter was now in the photo or that she’d left little dirty handprints on the fabric. In fact, the toddler gate-crashing would seem to elicit a communal ovary throb from every person in the room, regardless of gender

“She just needs to see momma,” Ware says, and bends down to scoop up her awestruck 14-month-old daughter, then dance her around to an obscure disco track.

All around, it’s an above-average Take Your Daughter to Work Day. Ware, a low-key clotheshorse, is happy to shed her Steve Jobs tendencies — “I’d have the same jumper and black trousers for every day of the week” — and is dancing freely to a soundtrack of NxWorries and other compulsively Shazam-able songs. New York is the penultimate stop on a mini-tour in support of Glasshouses, her most recent album. For fans, it’s been a teaser, a chance to get a glimpse of the self-possessed and soulful performances she’ll give on her world tour in 2018. For Ware, it’s been a helpful glimpse of life as a working mom.

“I had this very idealistic idea of how I was going to be able to be the best mother and I was also gonna make the best record of my life, of my career, and it’s all gonna be brilliant,” she explains later, once she’s returned home to London. “Now I feel kinda drained. I think I’m still adjusting to the balance of being kind of a mum and a singer.” She’s finally taking a break, living in sweats and watching football while the baby naps and dry-cleaning goes forgotten.

“I spoke to other mothers and they were like, Yeah, welcome to motherhood. It’s like guilt and gin. That’s what I’ve learned about motherhood,” she says with a laugh.

Ware is still learning. But, she says, having her first child (a daughter, whose name she prefers to keep unpublished) has already influenced her in ways she didn’t expect. When Ware released her first album, Devotion, in 2012, the 33-year-old British singer quickly became known for writing slow-burning love songs for, as she puts it, “People who like to feel like there’s jeopardy in love.” Her songs are about euphoria and melancholia; they’re anti-schmaltzy songs for people who prefer their relationship status “unrequited,” or at the very least “complicated.”

When Ware first emerged as a musician, her style was as important as her music. Both visually and aurally, Ware was the lovechild of Sade and Annie Lennox: big gold hoops, turtlenecks, sharp, tailored suits. “I loved always wearing big hoops. It made me not feel like a British person,” Ware laughs. “I think to me what was very important at the beginning was having a very strong sense of identity to help me with my nerves and my confidence.” She sang about feelings with the same composure and restraint that she brought to getting dressed — lots of angles and distance.

These days, “The hoops got a little smaller, which I’m sad to say. The suits have gotten a little bit more chic. I wear jeans now.”

Ware was pregnant while recording parts of the new album, her third, which came out earlier this year. Suddenly, she explains, she was filled with “all these different emotions.” “I had new kinds of love to talk about, and stories,” she says, “I was completely overwhelmed and tired and scared and excited. [My daughter] was kinda the muse of this record.”

Instead of disappointing relationships or fractured hearts, she sings about the guilty feelings that come along with being a mom on “Thinking About You.” On “First Time,” the relationship frustrations are about not having enough time for moments together. On “Sam,” she gets an assist from Ed Sheeran, who helps her write her most vulnerable song yet: Recorded when she was eight-and-a-half months pregnant, it’s a tribute to her husband and to her own desire to be a mother. “I wouldn’t have had the balls to write that kind of chorus on my own,” she says. (“And I hope I’m as brave as my mother / Wondering what kind of mother will I be? / I hope she knows that I found a man far from my father / Sam, my baby, and me.”)

This is not to say Ware has embraced schmaltz. Her fans can rest easy. Even while singing about some pretty gooey stuff, she’s kept in check by her own cheeky self-awareness. (It’s a trait perhaps best displayed on her podcast, Table Manners, where she grills friends like Sheeran and Benny Blanco,while they eat meals her mother whips up for them.) That self-awareness that means she’ll be able to keep from crying during live performances of “Sam” — even if the rest of us can’t.

Jessie Ware’s Daughter Is Her Muse
snacks Nov. 25, 2022
I Can’t Shut Up About Spam Figgy Pudding It’s so wrong, and yet so right.
gone sale-ing Nov. 25, 2022
25 Black Friday Lifestyle Deals to Make Your Humble Abode a Little Less Humble It’s all in the details.
black friday Nov. 25, 2022
22 Best Black Friday Fashion Deals From Everlane, Nordstrom, Saks, and more.
culture Nov. 25, 2022
Rebranding Midlife Celebrities like Naomi Watts, Stacy London, and Judy Greer are determined to make a business out of menopause.
gone sale-ing Nov. 25, 2022
36 Amazon Gift Ideas That Are Also On Sale For Black Friday Kill two bird with one stone.
5 questions with... Nov. 25, 2022
For Quentin Plair, Stripping Wasn’t Always on the Menu But the Welcome to Chippendales star’s confidence was renewed after playing an exotic dancer on TV.
gone sale-ing Nov. 25, 2022
The 27 Best Black Friday Beauty Deals Tatcha, Sephora, and Nordstrom are already offering some great discounts.
5 questions with... Nov. 25, 2022
How Amanda Gorman Fostered Her Confidence It didn’t always come naturally, but the poet built it with affirmations from her mom and using her imagery as activism.
¡hola papi! Nov. 25, 2022
‘I Lost My Creative Spark’ Don’t think about the book you haven’t written or the drawing you haven’t sketched out. Think about what role you want art to play in your daily life.
By J.P. Brammer
star material Nov. 24, 2022
A Handy Guide to Astrology’s Black Moon Lilith Lots of mystery and intrigue with this one.
5 questions with... Nov. 24, 2022
Pauline Chalamet Shares Her Most Embarrassing College Story Live lobsters were involved.
my two cents Nov. 24, 2022
How to Buy the Best Gifts With Less Money and Time It’s simple: Ask people what they want.
By Charlotte Cowles
celebrity Nov. 23, 2022
Pete Davidson and Emily Ratajkowski Hit a New Relationship Milestone The rumored couple reportedly celebrated Friendsgiving together.
chaos Nov. 23, 2022
Taylor Swift’s Ticketmaster Disaster Is Going to the Senate Congress will hold a hearing on competition in the ticketing industry.
ch-ch-changes Nov. 23, 2022
Alessandro Michele Confirmed Out at Gucci The creative director, who transformed the brand into a more playful, quirky, and gender-fluid version of itself, is exiting after almost eight years.
style Nov. 23, 2022
Is it a Crime to Go to the Met Gala? If you’re a sitting U.S. representative, the answer might be yes.
holiday gifts Nov. 23, 2022
These Nordstrom Black Friday Deals Should Be on Your Gifting Radar At every price point.
tis the season Nov. 23, 2022
Sir Elton John Lights Up Fifth Avenue For Saks’s annual holiday-window unveiling.
fashion Nov. 23, 2022
The Label That Changed Fashion I’ve known and covered Raf Simons for nearly two decades, so I have no doubt that the decision to close his 27-year-old business was thought out.
By Cathy Horyn
celebrity Nov. 23, 2022
Former Yeezy Employees Allege Ye Committed ‘Bullying Attacks’ on Staff In an open letter, the ex-employees urged Adidas leaders to address the toxic environment Ye created.
More Stories