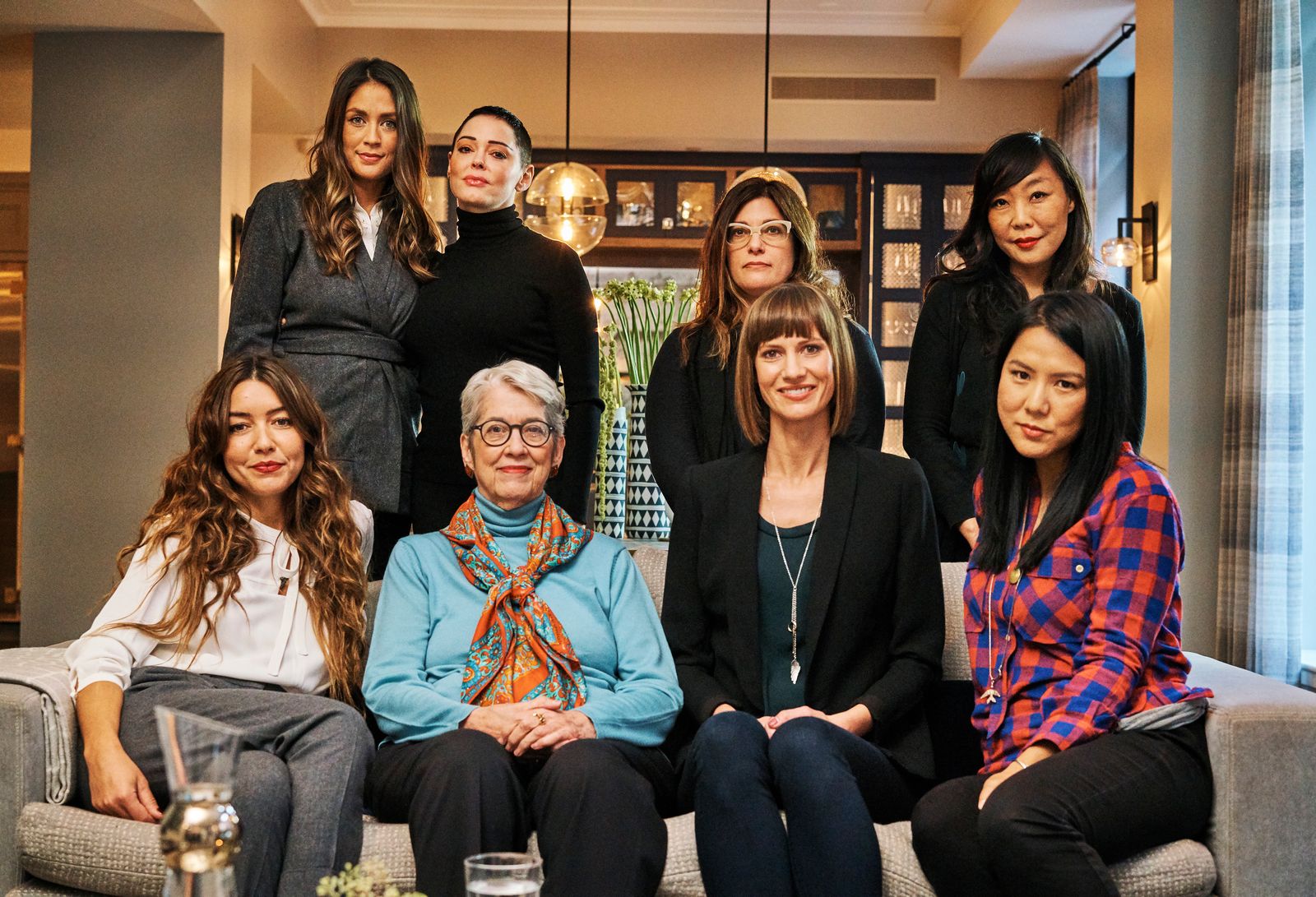 Rose McGowan Leads a Conversation on Assault and Harassment

At the invitation of New York, eight women who told the world about the sexual violations against them gathered together for the first time in mid-December to talk about the aftermath. Two of the women, Rachel Crooks and Jessica Leeds, say that the now-president made unwanted advances. (Crooks was a receptionist at Trump Tower, and says that in 2005 Trump repeatedly kissed her on the cheeks, and then the lips, while gushing about how she should be a model; Leeds says Trump, who was seated next to her on a plane, tried to put his hand up her skirt and grabbed her breast.) Three women, Mimi Haleyi, Dominique Huett, and Rose McGowan, say that Harvey Weinstein forced himself on them. Rebecca Corry, a comedian, says Louis C.K. asked her if he could masturbate in front of her. Suki Kim and Kristen Meizner say that the public-radio host John Hockenberry sexually harassed them. The women’s experiences vary, but as McGowan made clear with her opening question to the group — “What’s your level of fury?” — they deeply identify with one another’s ongoing struggle and commitment to force change.

Rebecca Corry: What has infuriated me — it can literally get me hot-faced and a sweat mustache within two seconds — is when I think about all of the people who 100 percent knew that Louis C.K. was doing this the whole time, yet [even now] they’re so far up his ass they can’t admit it. I’m not saying that people need to denounce his talent, or denounce their friendship. What they need to do is acknowledge what he did and say that it is wrong. To ignore it is to condone it. All the late-night talk-show hosts, I don’t believe one of them has done a single joke about what he did or even mention his name, not one! But they’ll go after Lauer, they’ll go after Trump, they’ll go after Weinstein.

Jessica Leeds: But just being angry is not enough. It was okay for a little while, but where do we do from here?

McGowan: I disagree with that. I think anger, righteous anger, propels. If you look at Act Up, the AIDS activists, they had righteous anger. The civil-rights movement, that was very earned anger. And this is earned anger. A lot of women are really scared of showing it — when have you ever seen it on TV or in movies? Only if the man’s cheating or something like that, right?

Rachel Crooks: I felt so many emotions the past year, but I finally felt anger when the #MeToo movement came up and all these other men were brought down. What happened to Trump?

Mimi Haleyi: I suppose Hollywood doesn’t need Harvey Weinstein quite as much as Republicans need Trump in the White House, so he’s getting away with more. I like to think he won’t be exempt, that it’s just taking a little longer.

Leeds: I’m not surprised Trump has escaped any consequences from the sexual-assault stories — there were so many other things he said that should have had consequences during the election. The Mueller investigation is the only hope of calling him to task.

Crooks: If Democrats win substantially in 2018, this could result in finally holding him accountable.

Meinzer: People have asked me, “Why did it take over a year and a half after you left the company to say anything?” Part of it is, I saw the people who spoke up evaporated. Number two, so much of how we’re taught to live in this world as women is to keep the peace, to smile, to say, “Oh, oh! That’s fine!” Of course I shouldn’t do this, but once in a while, I’ll look at the comments from trolls who are like, “Well, that doesn’t sound that bad. It’s not like he gang-raped you.”

McGowan: Or “You took a settlement” — that’s the new “You wore a short skirt, you deserve it.” You know why I did? So I could go to therapy and put myself back together. It didn’t work. I also donated to a rape charity. But the money I lost by being blacklisted? The amount of women who have been left by the wayside? Y’all should be mad because you’ve lost a lot of art, a lot of business, a lot of thought.

Corry: I recently was asked, “What are you getting from this?” One of the other girls this happened to said, “We got a face full of red pubes and not even a gift card to Starbucks.” I’m getting death threats, for telling the truth.

Leeds: I live in a New York bubble. I have had nothing but “Thank you” and “You’re so brave.”

Corry: I would challenge the media to stop using the word “alleged.”

McGowan: Yes, if I admitted “I stole your purse,” why is it still “alleged”? And why aren’t these men being prosecuted criminally instead of just losing their jobs?

Meinzer: I was in an interview recently, and they asked, “How do you feel about this alleged — ” I said, “I will not use the word alleged when I know what happened to me.”

Leeds: I had the experience of being interviewed with Anderson Cooper last week, and he was very nice. Prior to that piece, they aired an interview with a woman who is the campaign manager for Roy Moore, and he didn’t let her finish a sentence. He talked over her. He argued with her. And I’m thinking, Okay … I don’t agree with that woman, but I’m not so sure that I’m happy with his treating her that way.

Corry: Yeah, but she wasn’t letting him finish at all. I saw that.

Leeds: But the way he was conducting that interview, it was a typical male —

Corry: I think we have to be careful about saying “typical male” if someone is being assertive. I just felt that [Cooper] was a journalist going, “You’re gonna answer my questions.” Just be careful with generalizing a certain gender as one way.

McGowan: But maybe things are changing some. In Hollywood, someone told me that two women writers said that it’s the first time they’ve ever gone into rooms to pitch ideas that anybody’s listened to them. And this music producer I’m working with, he was saying he and his male friends were talking like, “Yeah, there were times I pushed too far … ” To me if there’s a hashtag “Me Too,” there’s gotta be a hashtag, “I Did It.”

Corry: I don’t see it in the comedy world. It’s like, Lighten up. What, are you a prude now?

Crooks: More women are getting into politics. Maybe it’s just school council, but they want to redefine things.

Leeds: We need more women high up in Fortune 500 companies.

Suki Kim: I teach journalism, and my students are learning this is not acceptable to have men treat them this way. It’s not okay for a really old boss to send me weird emails at 11 p.m.

McGowan: For me, the most positive thing is a girl coming up to me on the street crying and feeling it. It’s not fun to feel this stuff, but what’s the alternative? Plugging it up and just being another damaged person? I was just in India, which has a huge problem — it’s a real culture of silence there — and this woman in the audience when I was speaking said “Me too.” She started shaking and crying and said, “Me too.” And culturally that’s massive.

Corry: I would love to get through this to the point where we realize that we’re actually human before our sexuality.

Kim: I would just like to do my work.

McGowan: I’m really proud of all of us, because I know it’s not easy. I’m used to being hated, but I know it’s a real shock to the system. It’s shocking when people hate you and can’t spell at the same time. They can’t seem to do the “your” and “you’re.” “Your a whore!” I’m like, if you’re going to call me a whore, do it right.

Neither Jimmy Kimmel nor James Corden mentioned the Louis C.K. accusations; Jimmy Fallon was running taped segments when the story broke; Stephen Colbert and Seth Meyers touched on it only lightly. Trevor Noah gave C.K. the most attention: “At this point, all the women in Hollywood should win double Oscars for acting like all the men were cool all along.” Weinstein has maintained that all of his sexual encounters were consensual. Law enforcement officials in New York City, Los Angeles, and London are reportedly investigating sexual-assault accusations against Weinstein. The chances of Louis C.K. being criminally charged seem low because the incidents of masturbation reported by Corry and the other women are more than a decade old, and public exposure is considered a lesser crime with a shorter statute of limitations.

+Comments Leave a Comment
Rose McGowan Leads a Conversation on Assault and Harassment
science 51 seconds ago
Give Me the Goth Space Diamond Sotheby’s is expected to sell the 555.55-carat black diamond for at least $6.8 million.
my two cents 8:00 a.m.
‘I Was Harassed at Work. Can I Afford to Sue?’ Taking legal action might be more feasible than you think.
By Charlotte Cowles
recap 8:00 a.m.
And Just Like That … Miranda Blows Up Her Life, Again At least Harry doesn’t have penis cancer.
first person 7:00 a.m.
The First Time Was Terrifying. Now, It’s Just Excruciating. My family’s second bout with COVID might be worse.
By Reyhan Harmanci
valentine's day 7:00 a.m.
40 Valentine’s Day Gifts From Target All the heart-shaped products your heart desires.
zodiac seasons 7:00 a.m.
Your Guide to Aquarius Season Now is the time to be inventive and rebellious.
By Claire Comstock-Gay
succession Yesterday at 7:54 p.m.
Let This Brian Cox Quote Be Your Guide The Succession star is “too old, too tired, and too talented,” and, honestly, same.
tv Yesterday at 6:23 p.m.
Here’s Sebastian Stan on Filming With an Animatronic Penis The actor had a one-of-a-kind experience filming Pam & Tommy.
valentine's day Yesterday at 3:11 p.m.
58 Gifts for the Person You Love They deserve the world, but these picks will work too.
celebrity Yesterday at 1:59 p.m.
Finally, Something Bono and I Can Agree On He is apparently embarrassed by “most” of U2’s music.
news Yesterday at 1:56 p.m.
Cardi B Offers to Pay Funeral Costs for Bronx Fire Victims Last week’s apartment fire left 17 people dead and over 60 injured.
self Yesterday at 1:15 p.m.
I’m Tired of Explaining Why I Don’t Drink We have to expand our language beyond “sober.”
By Sarah Wood
remembrances Yesterday at 12:39 p.m.
The Fashion World Remembers André Leon Talley Designers, writers, and celebrities paid tribute to the inimitable fashion icon, who died on Tuesday at 73.
vampires Yesterday at 12:08 p.m.
Megan Fox’s Engagement Ring … Bites? “The bands are actually thorns. So if she tries to take it off, it hurts.”
celebrity Yesterday at 11:03 a.m.
Tracing the Ongoing Feud Between Britney and Jamie Lynn Spears Things spiraled out after Jamie Lynn went on Good Morning America to promote her new book.
style Yesterday at 9:35 a.m.
Anna Wintour Remembers André Leon Talley The Vogue editor mourned her friend and former colleague, calling him “a brilliant and compassionate man.”
in memoriam Yesterday at 8:33 a.m.
André Leon Talley Has Died The former Vogue creative director and editor passed away unexpectedly this week at the age of 73.
culture Jan. 18, 2022
There Really Is a Coordinated Online Attack on Meghan Markle A new analysis found that the Duke and Duchess of Sussex were the targets of a strategic, monetized social media campaign against them.
euphoria Jan. 18, 2022
8 Pieces You Can Shop From Episode 2 of Euphoria By Kim Shui, Réalisation Par, Nodaleto, and more.
fashion Jan. 18, 2022
All Signs Point to a Big Year Ahead for Aimé Leon Dore The cult menswear brand has a New Balance collection in the works and LVMH money in its pocket.
More Stories