And signals the future of the brand. 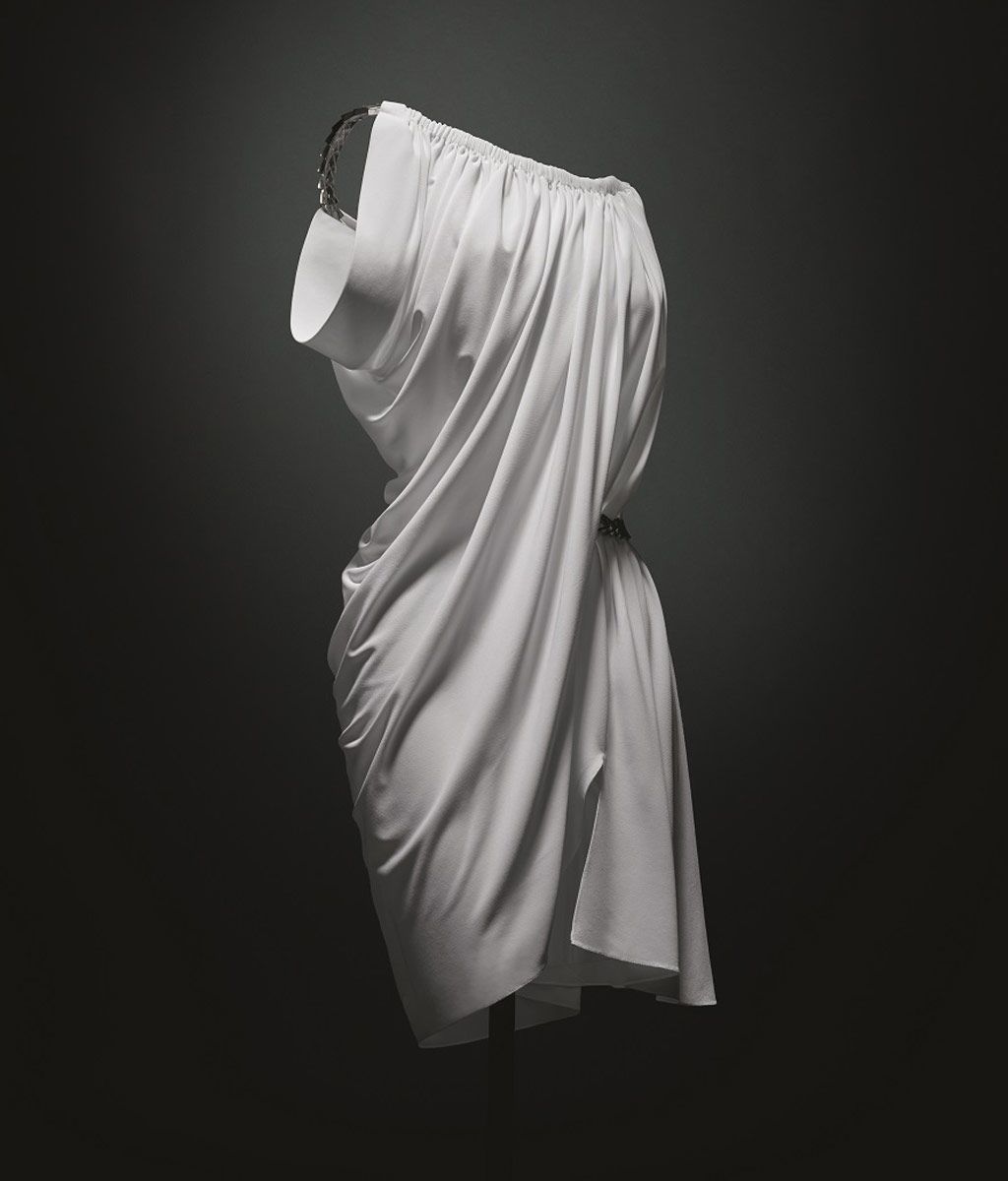 Each of the 41 looks in “Azzedine Alaïa: Je Suis Couturier” is unique, and together they tell a singular story. If you want to see the essence of a great career, look around the room where the exhibition is on display, at the late designer’s sprawling home in the Paris Marais. 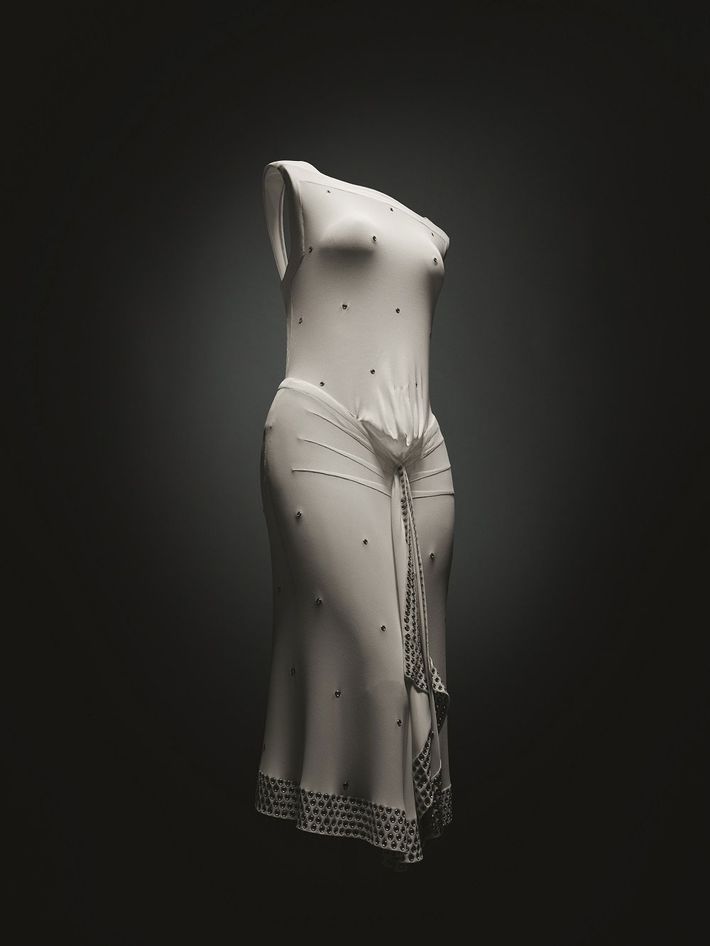 Yesterday, friends and family of the designer, who died in November, gathered for the opening, many on the verge of tears as they publicly confronted his loss, as well as the new reality at 11 Rue de la Verrierie. Titi Halle, a dealer in antique costumes and textiles in New York, who owns Cora Ginsburg, flew over specially for the occasion. The designer Marc Newson and his wife the stylist Charlotte Stockdale were there with their two daughters. So were Carlyne Cerf de Dudzeele, Naomi Campbell, and Charlotte Rampling. 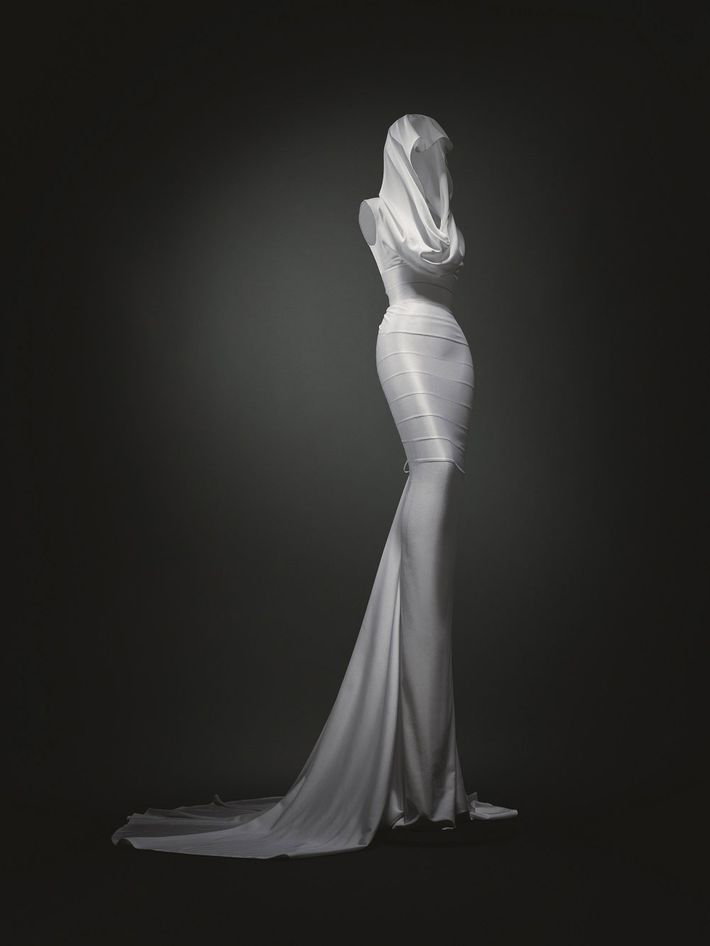 Held in lieu of a memorial service, the exhibition — open free to the public until June 10 — also served to show that the designer’s brand will continue. It’s owned by the Swiss luxury group Richemont, but in 2007, Alaïa and his partner, the painter Christoph von Weyhe, created a non-profit foundation to help protect his archives and long-term image.

It will be administered by Von Weyhe, Carla Sozzani, the Milan retailer who worked closely with the designer for nearly two decades, and the Paris costume curator Olivier Saillard, who selected the current exhibit from Alaïa’s vast archive — much of it in the basement of the vast Marais compound. 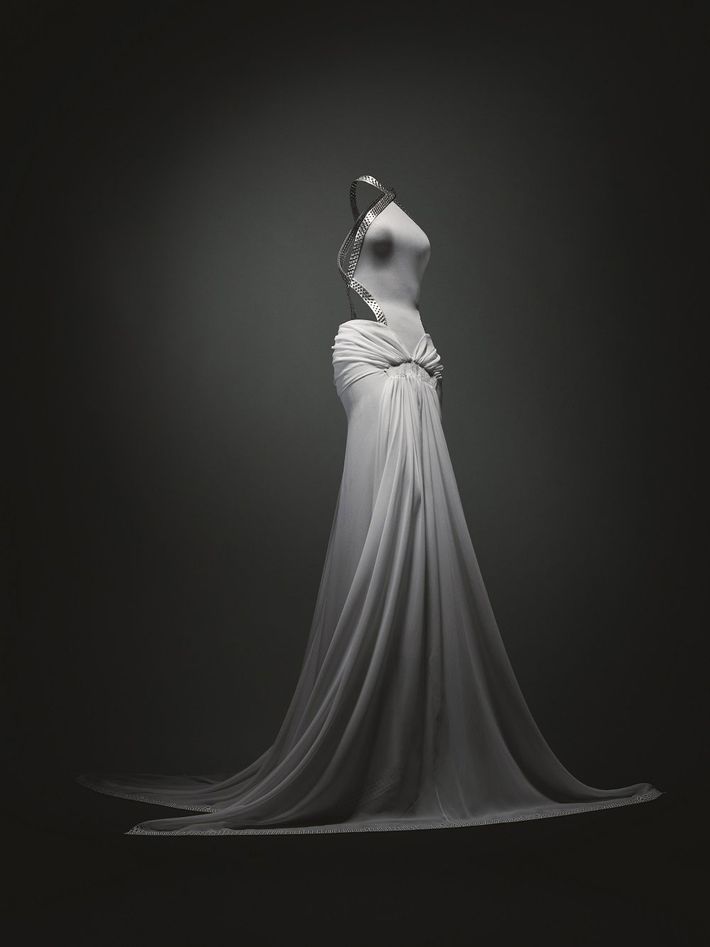 Around 1999, I visited the archive with Alaïa. It was overwhelming: a sea of clothing racks holding mostly black garments, with more special pieces in large crates. Since then, Saillard told me, the archive has expanded to other parts of the five-story building and also to outside storage facilities.

What relatively few people ever saw was Alaïa’s personal holdings of couture he collected by other designers. They include Charles James, Cristobal Balenciaga, Alix Gres, Madeleine Vionnet, Coco Chanel, Claire McCardell, and Adrian A. Greenberg, the Hollywood costume legend simply known as Adrian.

“Azzedine had three racks of Adrian,” said Saillard, still somewhat stunned at the quantity. He also owned a significant number of McCardells, one of the most influential (and coveted) American sportswear brands. He bought at auction, often outbidding museums.

He occasionally loaned pieces — “after many dinners and much talking,” said Saillard with a laugh. Alaïa loaned a few pieces to a Madame Gres show that Saillard organized a few years ago. 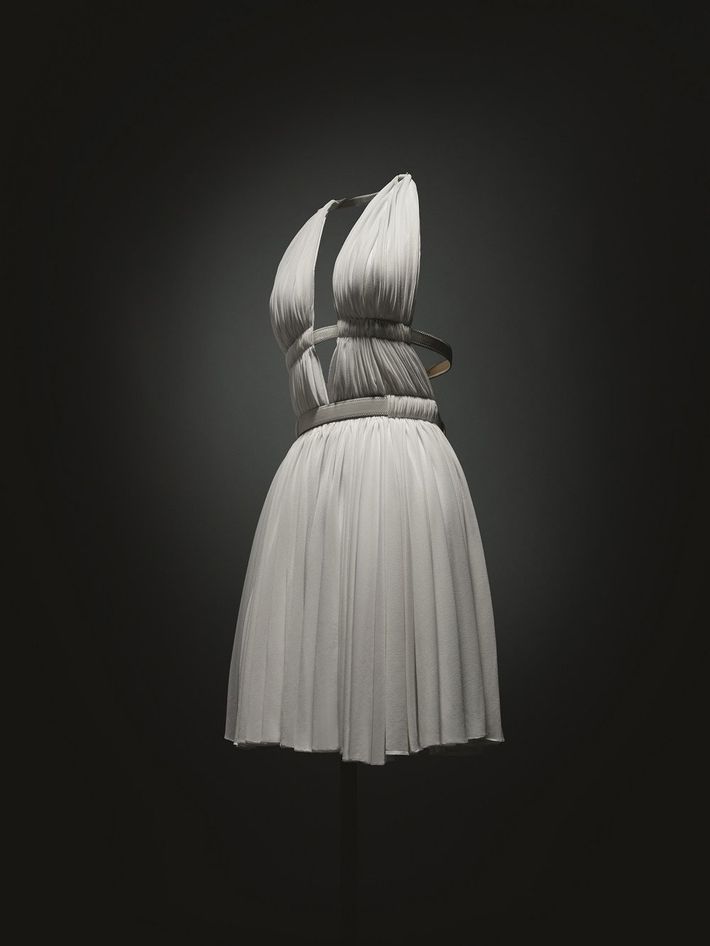 “I can say that it’s the most important private collection in the world that tells the story of fashion,” he said. Someday, once he’s had a chance to examine and catalogue everything — a process that may take a couple of years — Saillard says he would love to do an exhibition illustrating the metier of Paris couture, using examples from Alaïa’s personal collection.

Looking around the exhibit of Alaïa’s own work — black-and-white dresses and tailoring arranged in gun-metal vitrines — I asked Saillard if he felt there was one idea or emotion that linked Alaïa’s designs over the decades, and he nodded. “You can feel the atelier,” he said. The craft of making clothes, the same hands present year after year, the unfailing discipline. 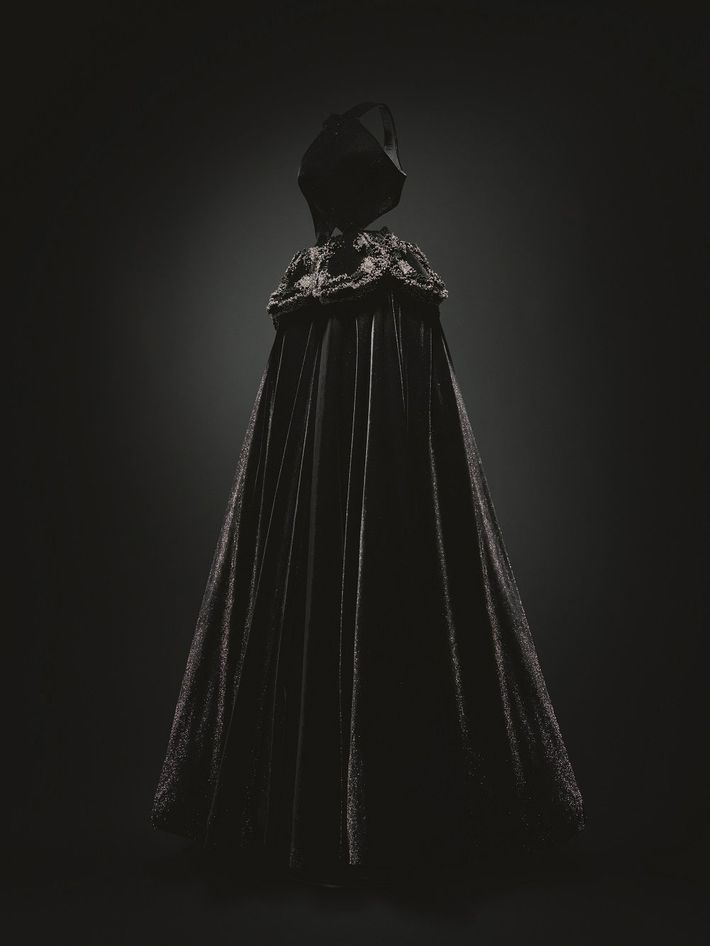 Which is partly why Sozzani is confident the brand can carry on with the studio and atelier, and of course the deep guidance of the archive. She laughed at the notion of hiring a new designer, as big houses and luxury conglomerates typically do.

“You can’t replace Azzedine,” she said. “He used to say, when people were trying to revive Vionnet, ‘Leave the poor woman alone!’ No, if we tried to replace him, he’d be back here, furious.” 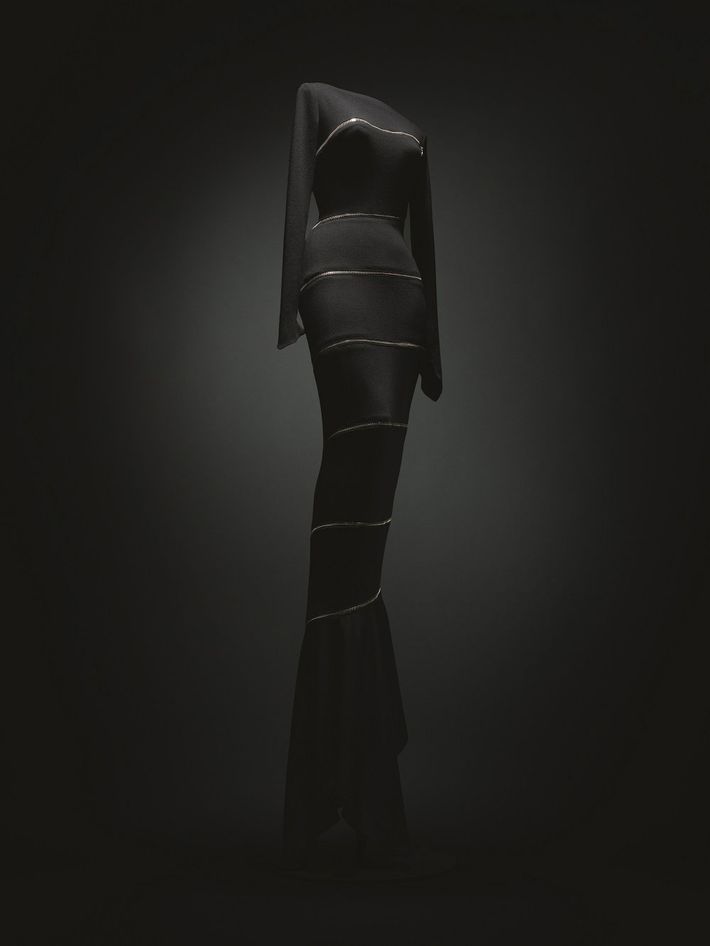 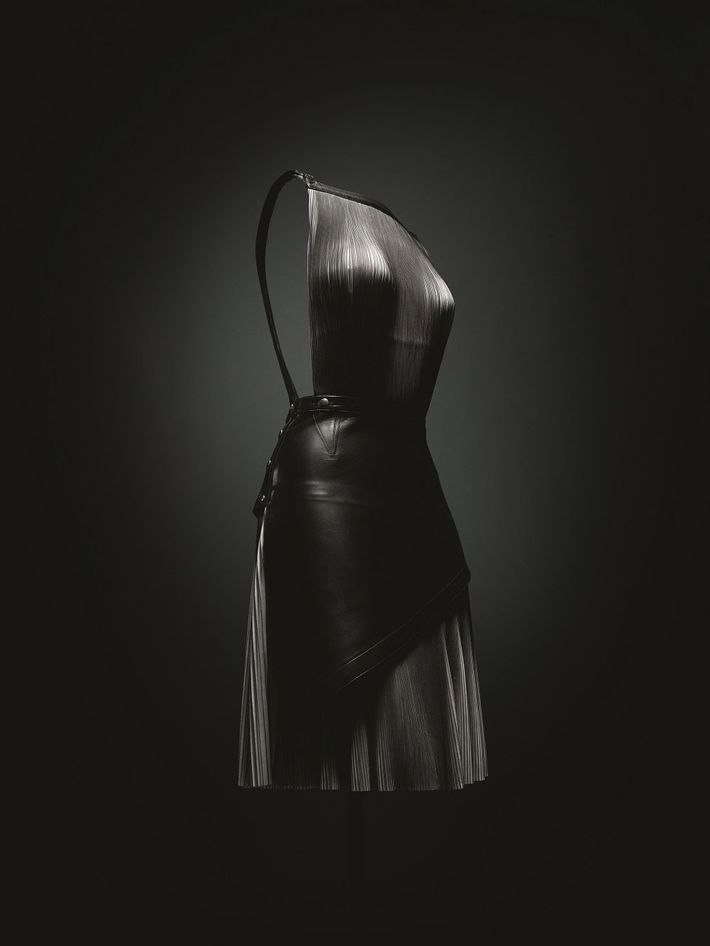 A Powerful Alaïa Exhibit Captures the Designer’s Spirit
books Yesterday at 9:01 p.m.
Tennessee School Board Stands by Maus Ban The school board responded to backlash to the ban, standing by its decision.
celebrity Yesterday at 8:43 p.m.
Kim, Pete, and Khloé Walk Into an Escape Room… First it was Jeff Bezos, and now it’s Khloé Kardashian’s turn to third wheel on a Kim Kardashian and Pete Davidson date night.
sure why not Yesterday at 6:39 p.m.
Self-Proclaimed Goth Nicolas Cage Has a Crow That Insults Him “He has taken to calling me names.”
sundance 2022 Yesterday at 3:27 p.m.
Fresh Is a Meet-Cute Horror The gory thriller will make you think twice about giving a guy at the supermarket your number.
culture Yesterday at 2:14 p.m.
Minnie Mouse Is Getting Girlboss-ified Tee-hee, a pantsuit!
paris couture week 2022 Yesterday at 1:32 p.m.
Glenn Martens Wows As Guest Couturier for Gaultier Haute Couture It is a sight to behold.
By Vivian Chuang
keeping up with the royals Yesterday at 12:33 p.m.
Prince Andrew Says He Doesn’t Even Know Ghislaine That Well Despite the fact that they were photographed hanging out together for years.
keeping up with the royals Yesterday at 12:09 p.m.
An Exhaustive Guide to the Prince Andrew Allegations The rape lawsuit, the sweatless alibi, the chubby fingers, and all the other threads of the royal’s Epstein association.
west side story Yesterday at 10:45 a.m.
Revisiting the Sexual-Misconduct Allegations Against Ansel Elgort His West Side Story castmates have responded to allegations that he assaulted a 17-year-old.
celebrity Yesterday at 10:43 a.m.
This Is Not Who I Imagined As Kim and Pete’s Third Why Jeff Bezos?!
my two cents Yesterday at 9:46 a.m.
‘I’m a Stay-at-Home Parent and My Husband Just Walked Out on Us’ Don’t panic. There are resources to help you out.
By Charlotte Cowles
recap Yesterday at 8:00 a.m.
And Just Like That … Charlotte Taught Us How to Insert a Tampon P.S. Don’t show up to Che’s unannounced.
makeup Jan. 26, 2022
Glossier Announces ‘Difficult but Necessary’ Layoffs The company reportedly laid off one third of its corporate employees.
sundance 2022 Jan. 26, 2022
The Heartbreak of Leaving Behind a Best Friend Am I OK? is for our platonic long-distance loves.
celebrity couples Jan. 26, 2022
Brenda Song and Macaulay Culkin Are Engaged Congrats to Hollywood’s most low-key couple.
power Jan. 26, 2022
What to Know About Judge Ketanji Brown Jackson She reportedly ranks high on President Biden’s shortlist to replace Justice Stephen Breyer.
kimye Jan. 26, 2022
Why Are We Suddenly Talking About Ray J’s Laptop? Kim Kardashian has denied Ye’s suggestion that there was a second sex tape.
power Jan. 26, 2022
What We Know About the Death of Lauren Smith-Fields The family of a 23-year-old Black woman plans to sue the city of Bridgeport for failing to properly investigate her death.
and just like that Jan. 26, 2022
The Triumphant Rise of … Charlotte? If And Just Like That … succeeds at nothing else, it makes good use of the franchise’s most underestimated character.
sober questioning Jan. 26, 2022
Ask Ana Marie Cox (Almost) Every Question You’ve Ever Had About Sobriety The Cut’s new biweekly column is talking drinking, not drinking, and everything in between.
More Stories