Maybe the most powerful thing right now is a perfectly shaped shoulder line. 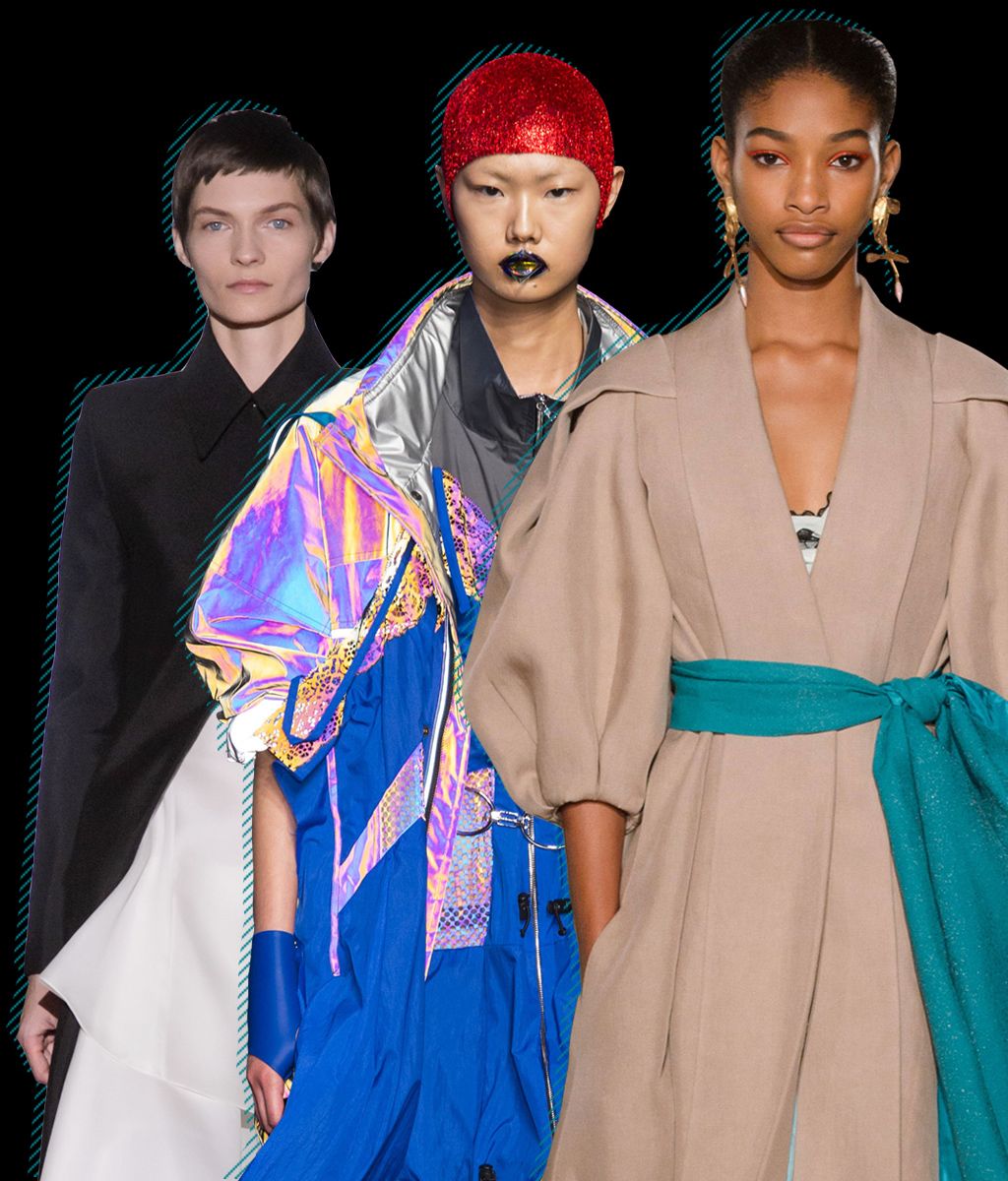 In one way or another, fashion is about the pursuit of the new, even — perhaps especially — in haute couture. Yet it’s been drilled into those of us who cover fashion that couture has little relevance since it’s for the super-rich or red-carpet person. Thus does every attempt to “explain” couture’s magic or connect it to our defiant political moment sound to me like unbearable nonsense.

Right now there is only one reason to pay attention to couture. It does things that ready-to-wear cannot. That was my takeaway from this week’s Paris collections.

And I don’t mean that old notion of couture being a laboratory of ideas, something people said in the ’70s, when they began looking for ways to justify its continued existence. I mean that, in the past few years, ready-to-wear has abdicated its power to influence and excite people. There are exceptions, of course — there are always exceptions. The work of Nicolas Ghesquière, for example, and Raf Simons. Also Miuccia Prada, Rick Owens, and Rei Kawakubo. But in the last year or so a number of big designers have died or stepped away or been sidelined, including Azzedine Alaïa, Phoebe Philo, Alber Elbaz, and Riccardo Tisci. Christopher Bailey plans to retire from Burberry at the end of the year.

There’s no easy explanation for the default of ready-to-wear. It’s related to the rapid development of mobile technology and the unstoppable rise of relaxed dressing. Four years ago, in an essay in the Times about the flood of commercial-looking designs on the luxury runways — ’40s-style coats from Philo at Céline, trim minis from Ghesquière, tracksuits from Chanel (shown in a supermarket, no less). — I wrote that it pointed to a new reality. Because more and more consumers were experiencing fashion on phones, it meant that designers had to stick to very narrow branding “guard rails”to be successful. Messages had to be simplified.

Indeed — it took me awhile to see this — suddenly there was no appetite for the kind of conceptual fashion once standard by stars like Jean-Paul Gaultier, Helmut Lang and Martin Margiela, which gave ready-to-wear its enormous creative edge over stuffy haute couture. Conceptual fashion required time to “decode,” to unravel the social or political meaning — and who cared?

Few people, I wrote, understood these changes better than Hedi Slimane, then in the process of stripping away years of Saint Laurent mythology to get at the brand’s primary, late-’60s coolness. Now LVMH has hired Slimane to do something of the same at Céline, and of course people reacted. “He’s good at creating a tension,” allowed one LVMH designer. “The group needs that.” It also needs new channels of growth. As the Business of Fashion pointed out in a post about Slimane, Céline has been an internet laggard. It only recently started e-commerce. Slimane, who expects to add menswear, fragrances and, um, couture to the label, will change that — and just in time. According to a report by McKinsey & Company, cited by BoF, the share of total luxury sales done online is expected to triple in the next 10 years.

With high-end ready-to-wear yoked up to the internet’s mass demands, couture starts to look pretty great. It’s free-wheeling! No “guardrails” to obey. And because it’s deeply rooted in craft, it tends to be disinterested in cultural or political headwinds. What a relief!

For me, the best of the spring couture collections — Chanel, Valentino, Givenchy, Maison Margiela — all had one thing in common. They drew confidently on the fundamentals of couture — that is, special fabrics and masterly cutting and finishing.

The same reason that people crave a dish of boeuf bourguignon after a vegan diet is why, I think, the audience reacted so positively to Givenchy’s sharp-shouldered coats and Valentino’s lush colors. You can see the difference with your own eyes. You don’t have to be an expert in haute couture, and you don’t need an explanation to understand it.

Why? Because it’s based on tangible qualities. Clare Waight Keller, in her superb couture debut for Givenchy, chose Japanese fabrics that would soak up dyes, creating a super-saturated black for tailoring and the dazzling purple-to-red-to-blue hues in a fabulous hand-dyed tiered skirt in pleated silk.

What I especially loved about this show was how deftly Waight Keller lobbied for a more narrow silhouette. For the past couple of years, we’ve seen oversize, layered — think of Marc Jacobs’s spring collection. Those crisp shoulders, which Waight Keller first showed in October, look really appealing. And she balanced the masculine elements (such as they were) with a restrained femininity — soft tiers of pleating, a lace gown done in a smoky mix of black, cream, and beige — that many women love.

At Margiela, John Galliano’s holographic fabrics were an extraordinary demonstration of a commonplace — the tendency of people to view stuff through a phone lens. When hit with a camera flash, the reflective garments exploded into color and pattern. Galliano’s hectic cutting style merged with the interactive fabrics. As Bridget Foley said in WWD, it was a great display of his rare power: “Coalescing the beautiful with the new and challenging.”

Before the Valentino show, Pierpaolo Piccioli wanted me to see how light everything was, so he kept balling up beaded dresses and taffeta coats in his hands. “See, it’s nothing!” he’d say. Actually, this show offered direction on several fronts: in the gorgeous combinations of color (cerulean with pistachio and deep magenta, say); in the total ease of the shapes, and in the glamour that stopped just short of spectacle. I can’t think of anyone in ready-to-wear who would put all those pieces together. You also have to ask: why not?

The jewel in the Chanel show, staged in a rose trellised garden, were the nearly invisible smudges of embroidered flowers on the cuffs and hems of a jacket. Karl Lagerfeld skipped the bags and jewelry in this dreamy show, which also kept the models grounded in low-heeled boots done in the same fabrics as their outfits, a timely nod to streamlined dressing.

I thought it interesting that all these designers based their collections on the form of couture, and not on fantasies or current events, though I suppose Givenchy’s cooly strong femininity could be read that way. The fact is, with the massive ready-to-wear shows oversubscribed and struggling to seem relevant, maybe the most powerful thing right now is a perfectly shaped shoulder line. I was thinking about that as I left the Vetements showroom in Paris. Demna Gvasalia and his team stage the Vetements show ahead of other ready-to-wear brands, and this time they used the aisles of a Paris flea market.

Gvasalia said he wanted to confront “the elephant in the room.” By this he meant the notion of fashion appropriation generally, his use of certain Margiela themes (he once worked at the brand), and the clichéd image of designers ransacking flea markets.

But that was trouble. Despite Gvasalia’s zeal and many arresting styles, like lacy camouflage and collaged T-shirts, the whole thing actually felt weighed down by the “elephant” idea.

I wanted to be out of the flea market.

I wanted to be free of explanations that ultimately go nowhere.

But, most of all, I wanted Demna Gvasalia himself to be free of these thoughts.