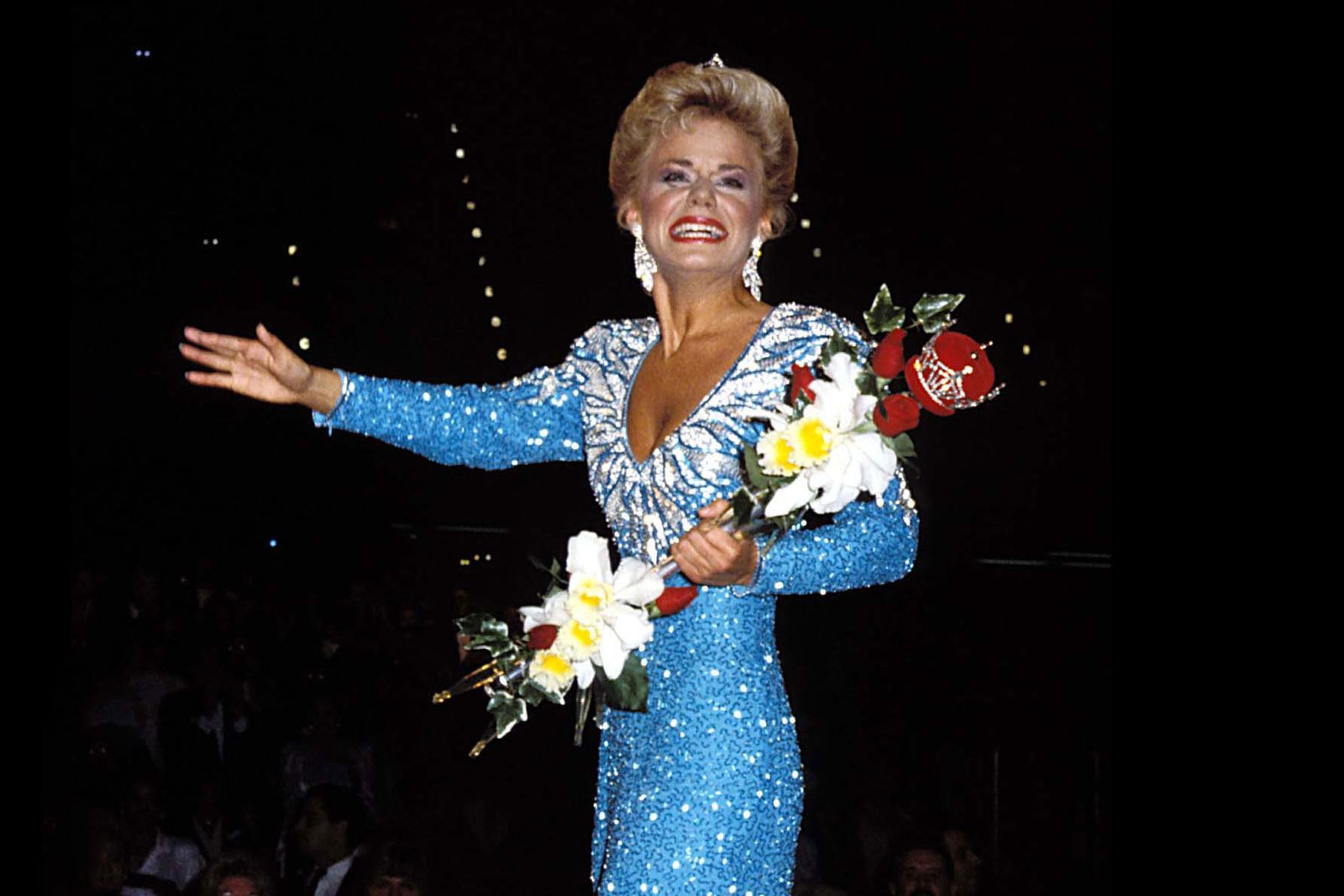 There is some initial satisfaction in the appointment of Gretchen Carlson as the new Chairman of the Board of the Miss America Organization. What better way, one might think, to remedy the recent scandal (the revelation of former CEO Sam Haskell’s sexist and demeaning emails about contestants) than by putting a woman, an actual former Miss America 1989, at the helm?

Carlson has been an especially eloquent and vocal critic of Haskell and his cohort in past weeks, burnishing her reputation as feminist whistle blower and caller-to-account of exploitative media moguls. What’s more, Carlson arguably established some of the earliest roots of the #metoo movement two years ago when she brought down that lecher extraordinaire, former Fox News chairman Roger Ailes, with her 2015 sexual-harassment lawsuit against him. Carlson is also the author of two books in the popular hybrid style of autobiography/go-girl feminism: Getting Real and Be Fierce. Both books feature cover photos of the author in de rigueur, post-Fox makeover mode: blonde hair deflated from poufy to sleek and bright jewel tones replaced with all-black, so that she looks less like a conservative newscaster and more like a glamorous feminist intellectual. (Megyn Kelly underwent a similar metamorphosis when she jumped the Fox ship.)

It all would seem to be a picture-perfect illustration of the old adage “turnabout is fair play,” a point Ms. Carlson herself suggested when she declared, “The women of Miss America are determined to take back our program.”

But is Carlson’s ascension to board leadership (along with several other former Miss Americas also taking board seats) truly an example of “turnabout?” And even if so, does this count as fair play?

For the women of Miss America to “take back” their program, they would have to have controlled it in the first place, at some earlier time. But of course they did not. While Miss America has always depended, obviously, on the participation of thousands of women, the contestants have never controlled the pageant. How could they? The pageant is about controlling them.

Long considered the most wholesome of the beauty pageants, the one tied to our peculiarly nationalistic view of virtuous young womanhood, Miss America has never strayed very far from its roots as a spectacle using female flesh, in a very narrow range of size, shape, age (and until recently, color), to promote commercial transactions, essentially as a form of advertising.

The Miss America competition was a tactic dreamed up in 1921 by hoteliers in Atlantic City looking for a late summer entertainment that would encourage people to stay a little longer at the shore and spend money. What better way to encourage spending than to provide lots of young female bodies to ogle?

The original pageant was dramatically racist and paternalistic. It permitted only women “of the white race” and required participants to appear unattached, hence “pure” and attainable (they could not be married, for example — a rule that still stands). Yet even as they were touting the girls as virtuous future wives (“able to shoulder the responsibilities of homemaking and motherhood,” as a 1921 press account described that year’s 15-year-old winner), they were also using them to titillate tourists, in a classic example of the contradiction always at the heart of this tradition. Young women are used as commercial lures, as objects useful for advertising products or tourist sites — erotic spectacles for group assessment — but they are also supposed to appear innocent. They’re meant to evince total unawareness of the sexualized status they are being given. This is so often America’s Catch-22 view of female sexuality: prurient and transactional, yet disavowed.

The now-infamous emails of former pageant CEO Sam Haskell reek with vulgarity and contempt for women’s bodies. He is getting what he deserves. But to excise a CEO, to punish the Miss America organization with a loss of sponsors, or even to populate its board with former beauty queens, all amounts to less even than the proverbial Band-Aid on the problem.

The problem is that Haskell revealed the device (albeit brutally): Miss America has never been about education, talent, “scholarships” or “self-improvement.” If it were, contestants would come in all shapes and sizes and would wear something other than revealing swimsuits and evening gowns. (For that matter, if pageants were truly showcases meant to reward promising young people, why limit them to women? Why not have Mr. America pageants featuring college-aged men and hosted by middle-aged women? Imagine Martha Stewart or Oprah “interviewing” a line-up of 22-year-old guys in tuxedos.)

If such ideas strike you as laughable, it’s because we all know what pageants are really about. They’re opportunities for sponsors to buy airtime and sell things, harnessing our collective interest in both desiring and judging women, in the service of capitalism.

When HuffPost first published its item on Haskell’s appalling emails in which he “fat- and slut-shamed” Miss America Mallory Hagan, it accompanied the article with “before and after” photos of Ms. Hagan, showing her looking toned in a bikini during the competition and somewhat less toned, in the same bikini, afterward. These photos make my point: even as readers were being invited to condemn Haskell, they were also being invited to become Haskell, to scrutinize and judge slight alterations in Ms Hagan’s physique for themselves — much as audience members of pageants can sometimes vote for favorite contestants by phone or text during the telecast.

In other words, HuffPost could not resist using what they knew would prove irresistible clickbait: not just photos of a scantily clad woman, but the opportunity for readers to contemplate and assess that woman. It’s a time-tested pleasure that combines Eros with Schadenfreude, and which undergirds not only beauty pageants but much of the fashion, beauty, and magazine industries.

The problem then is not simply that one tone-deaf and reckless CEO spoke disparagingly about a pageant contestant. The problem is that in 2018 we have still not moved beyond conflating young women’s bodies with media entertainment, beyond holding up young women as things to be quantified, as objects of sexual desire, but never as desirers. Why are we surprised that a man who devoted his career to creating such a spectacle has a purely commodified, pre-feminist view of the participants? And why are we still willing to wring our hands over this — and every other lecherous, misogynist older man — and not turn our attention to remedying the cultural problem itself?

The Haskell email kerfuffle was but a symptom of the deeper rot at the core of the whole beauty pageant concept. For all her newfound corporate feminism, Gretchen Carlson can do little to fix it. The only solution is to let beauty pageants — and their narrow, retrograde view of womanhood — die their natural death. Stop funding them. Stop watching them. Stop holding them out as appropriate vehicles for the aspirations of young girls. Who knows? Maybe on some level, doing so will help us resist the deeply troubling (and not unrelated) politics of another former beauty pageant executive — the one currently, in theory, running the free world.

+Comments Leave a Comment
Gretchen Carlson Can’t Fix the Miss American Pageant
recommendations 3:00 p.m.
We Should All Be Wearing House Shoes A foolproof way to avoid bringing a dustpan’s worth of dirt into your bed.
k-i-s-s-i-n-g 10:00 a.m.
Lexi and Fez, Sitting in a Tree Could this be Euphoria’s most unexpected romance?
buzz buzz buzz 9:00 a.m.
All Our Burning Questions From the Yellowjackets Finale Some of the biggest mysteries remain unraveled.
how i get it done 7:00 a.m.
How Milk Bar’s Christina Tosi Gets It Done “More colorful, more magical, and more rule-breaking.”
By Kristen Bateman
astrology Yesterday at 8:30 p.m.
Madame Clairevoyant: Horoscopes for the Week of January 17 Aquarius season begins this week, and there’s a full moon in sensitive Cancer.
By Claire Comstock-Gay
sex diaries Yesterday at 8:00 p.m.
The Mom Trying to Meet Her Online Boyfriend IRL This week’s sex diary.
celebrity Yesterday at 6:33 p.m.
Britney and Jamie Lynn Call a Truce in Feud Over Claims in Jamie Lynn’s Book The latest in the ongoing Notes app saga.
kimye Yesterday at 6:13 p.m.
The Ups and Downs of Ye’s Dramatic Weekend From a tell-all interview to the saga of Chicago’s fourth birthday party.
news Yesterday at 3:15 p.m.
Everything We Know About The Texas Synagogue Hostage Situation The suspect has been killed, but a motive remains unclear.
vaccines Yesterday at 1:00 p.m.
Australia Is Now Djokovic-Free Unvaccinated tennis star Novak Djokovic is out.
yellowjackets Jan. 15, 2022
Misty From Yellowjackets Is the Scariest Character on TV Beware the quiet ones.
culture Jan. 14, 2022
Jerry Harris Was Our Hero He was the most-loved cheerleader on Cheer’s premiere season. Season two charts his downfall.
friday sales Jan. 14, 2022
19 Things on Sale You’ll Actually Want to Buy: From Aesop to Crocs Including a dog collar that’s rarely on sale and one of our favorite portable speakers.
beauty Jan. 14, 2022
How Gym Culture Went From Punishing to Meditative People are starting to insist that exercise focus on mental health, not be an obligatory regimen that will change the way they look.
celebrity Jan. 14, 2022
Neve Campbell Was Once Attacked by a Bear on a Movie Set “They said dip your hand in honey and just run.”
bffs Jan. 14, 2022
In Yellowjackets, Female Friendship Is Horrific That’s why I like it.
celebrity Jan. 13, 2022
Britney Spears Accuses Jamie Lynn of Using Her to Sell Books Yes, she’s seen the GMA interview.
celebrity couples Jan. 13, 2022
Julia Fox and Ye Aren’t Doing Labels, Because of Course Not And they’re definitely not a PR stunt, says Julia Fox.
what the what Jan. 13, 2022
I Joost Loove Joots Both Julia Fox and Kim Kardashian wore “pantaboots” in the same week.
rust Jan. 13, 2022
Rust Shooting Investigators Are Waiting for Alec Baldwin’s Phone Alec Baldwin defends his cooperation with the investigation as another lawsuit emerges.
More Stories