Much like a modern-day Icarus, musician John Mayer has been felled by his own hubris — in this case, because he ate way too many Mini Oreos then got a tummy ache.

On Sunday night, Mayer shared in an Instagram story that he was partaking in the time-honored activity of eating way too much food in preparation for a period of healthy eating. “We start working out Tuesday. Until then we burn. This. Motherfucker. Down.” he wrote after emptying six bags of Mini Oreos into a bowl and topping them with almond milk. 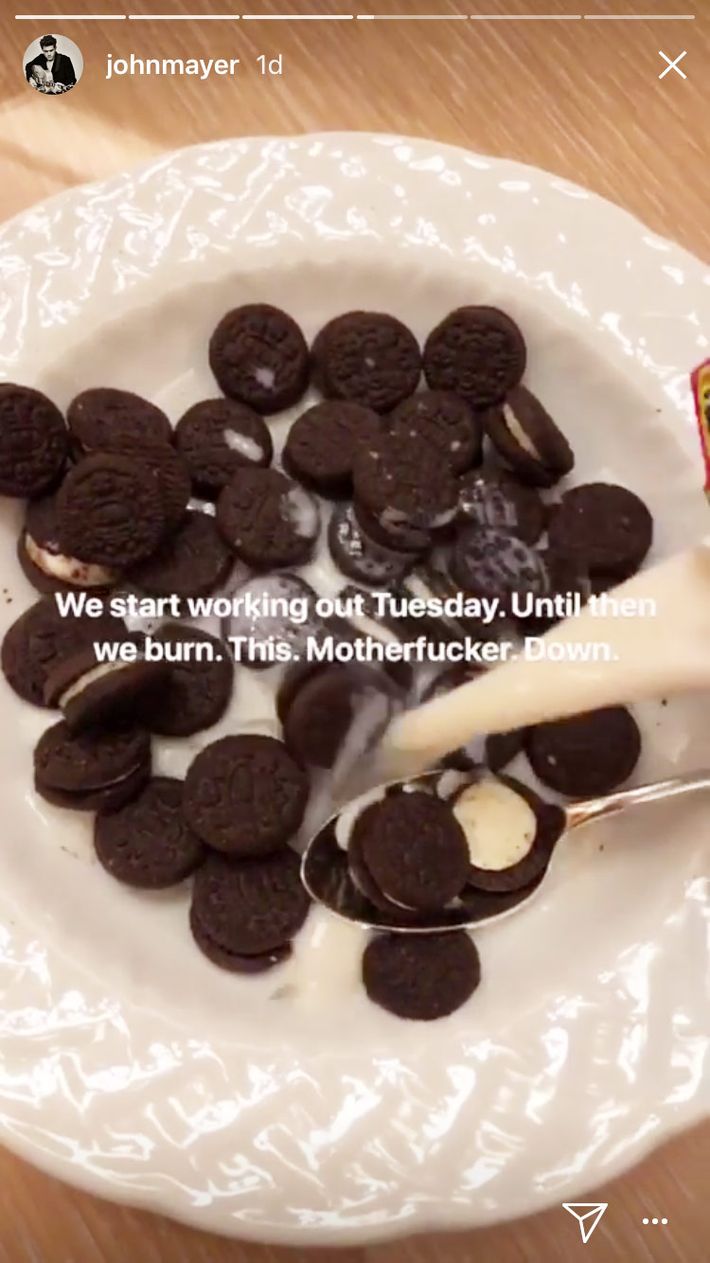 Alas, this soon proved to be his downfall. “I have an upset stomach. Yes, I know it’s from the mini Oreos. I’ve learned a lot from putting cookies in milk,” a humbled Mayer wrote a few hours later, upon finding his body was anything but a wonderland. “I learned that just because it fits in a bowl and soaks up milk doesn’t mean it’s good to eat it. Cookie Crisp is specially engineered not to be cookies, but to be cereal.” 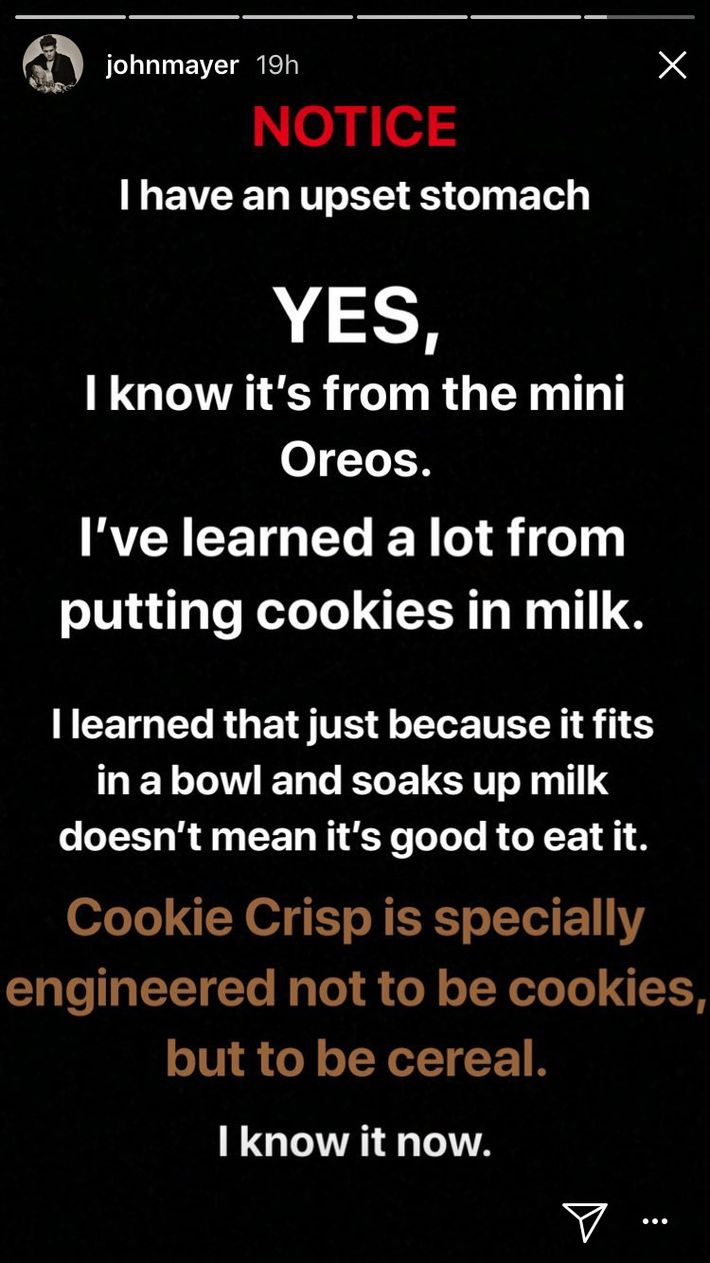 All hope is not lost, though: there are always Oreo O’s.

See All
tv Jan. 15, 2021
Bling Empire Is Selling Sunset With More Billionaires The year’s first reality hit follows a group of wealthy Asian and Asian American people living in L.A.
a beautiful life Jan. 15, 2021
Jason Wu Is Ready to Dress Faces Now Talking to the designer about his new beauty brand.
screen time Jan. 15, 2021
A New Dawn for Bodycon And other trends I’ve noticed in my feed this week.
By Emilia Petrarca
politics Jan. 15, 2021
Everything You Need to Know About Inauguration Day On January 20, Joe Biden and Kamala Harris will become president and vice-president. Here’s how to watch the ceremony and what to expect.
covid-19 Jan. 15, 2021
I Tried to Get a ‘Leftover Dose’ of the Vaccine Last Night Hundreds of other New Yorkers did, too.
By Stephen Lurie
style Jan. 15, 2021
How This Drag Race Contestant Sourced Her Jaw-Dropping Wardrobe Kahmora Hall’s Bob Mackie collection would make Cher proud.
cut chat Jan. 15, 2021
Andrew Yang Is the Ultimate Alt Dad Of course he got a Very Serious Director to do his campaign video.
hear ye hear ye Jan. 15, 2021
Young Man Gets His Own Bowl Congratulations, Shawn Mendes, on your very own bowl.
friday sales Jan. 15, 2021
22 Things On Sale You’ll Actually Want to Buy: From the North Face to Ganni Including lots of on-sale cashmere.
niche drama Jan. 15, 2021
I Know Too Much About This Disney Love Triangle Now Everyone on TikTok has a theory about the song “drivers license,” allegedly about a breakup between the stars of the High School Musical TV show.
crime Jan. 15, 2021
The Last Man Set to Be Executed by the Trump Administration What to know about Dustin Higgs, the final person scheduled to be killed in Trump’s cruel and unprecedented execution spree.
hot bod Jan. 15, 2021
You Don’t Have to Commit There’s no point to sticking with an exercise routine if you don’t actually like it.
next level Jan. 15, 2021
The Fashion Editor Who Just Went Solo  Karissa Mitchell launched her own clothing line this past November.
By the Cut
the body politic Jan. 14, 2021
They’ve Been Calling for Bloodshed the Whole Time It’s not just Trump — some on the right have supported violence for years now; the party has built its power on them.
By Rebecca Traister
power Jan. 14, 2021
Ivanka and Jared Don’t Let Just Anyone Use Their Toilets They apparently forced their Secret Service detail to go to extraordinary lengths to heed nature’s call.
meet-cutes Jan. 14, 2021
Every Coffee-Shop Writer Had a Chance Riz Ahmed is secretly married (!) to someone he met in a coffee shop (!!!).
capitol riot Jan. 14, 2021
High-School Therapist Arrested for Storming the Capitol In a resignation letter, she said she was “switching paths to expose the global evil of human trafficking and pedophilia.”
lunchtime buy Jan. 14, 2021
How to Look (and Feel) a Little Less Gray Instant glow for only $15.
collaboration station Jan. 14, 2021
Simone Rocha Has a Surprise for You Hint: It’s going to be highly affordable.
ch-ch-changes Jan. 14, 2021
Sephora Has a Plan to Tackle Racial Bias New protocol, fewer security guards, and more Black-owned beauty brands.
More Stories