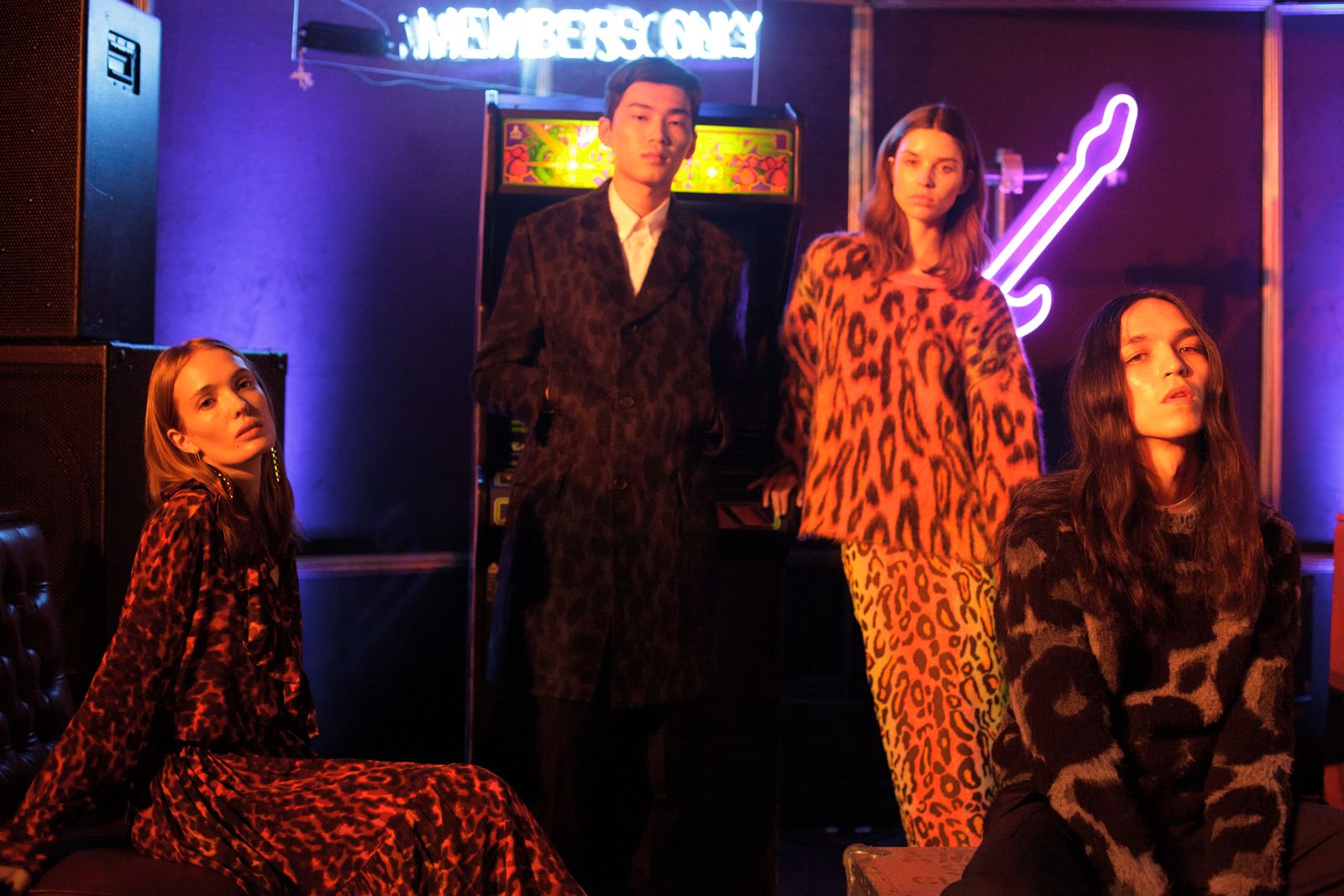 She is the definition of good vibrations,” Katy Perry said at Stella McCartney’s fashion presentation and party in Los Angeles last night. “Really, Stella, her work is so phenomenal, but she is such a good vibe.” Perry wore a cherry-red, one-shouldered Stella McCartney gown and gushed about the designer after mingling with Goldie Hawn and Kate Hudson.

“It’s just always fun, that’s why we come, because it’s not work,” Perry said. “The clothes are so great, they’re just so architectural this season, and it’s just a big fat get together where we can be ourselves, conversate, and meet again. I’m on the road so I’m not able to go to a lot of these things, so it’s fun for me tonight.”

McCartney threw a star-studded “Stellabration” to unveil her autumn/winter 2018 collection, hosted at the Hollywood music venue S.I.R Studios. A neon Time’s Up sign welcomed guests inside, showing support for the women’s initiative. “Celebrities with regular people peppered in,” was how one guest described the milieu. You couldn’t move through the party without bumping into, say, Kate Mara or Rashida Jones, who sweetly shared a booth with her dad, Quincy Jones. We spotted Amber Valletta in an asymmetrical pink ensemble, Paris Jackson with an excellent red fanny pack, and Christina Aguilera wearing a beret with dark sunglasses. David Lynch and David Hockney were there, as were Ed Ruscha and, in a corner, Ringo Starr — no big deal. 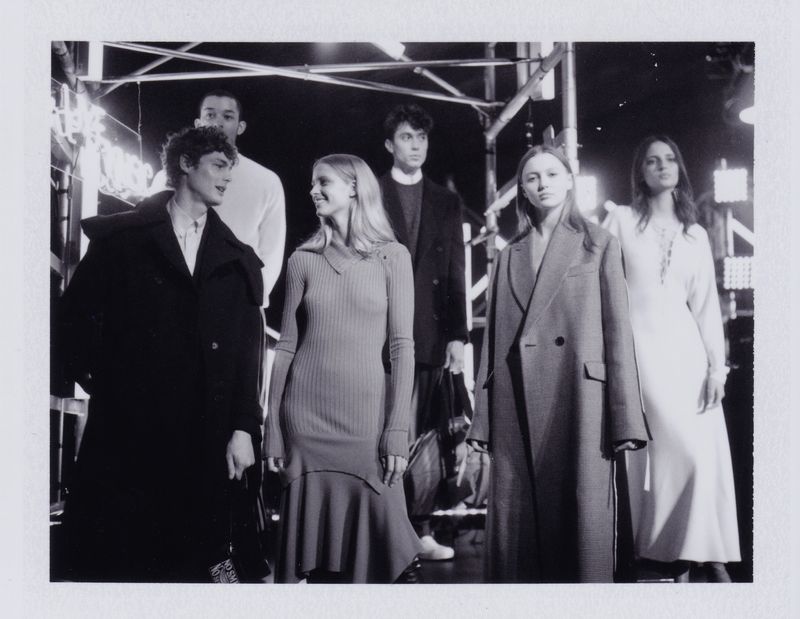 The party felt like a music festival, with pizza slices served in boxes emblazoned with Stella’s visage, vegan empanadas, tiny spicy tamales, and mini churros. Models posed among music equipment and old Pac Man machines in various rooms throughout the cavernous space. They flanked a center stage during performances by the likes of Grimes and St. Vincent, swaying in the designer’s gold lamé gowns and orange leopard-print knits.

An extensive music lineup included a set by Beck (supported by the ultratalented Compton Kidz Club Choir), but the true musical highlight was McCartney’s dad Paul, who joined a leather-jacket-clad Beatles cover band onstage to sing “I Saw Her Standing There” and “Helter Skelter.” He and the Dr. Pepper Jaded Hearts Club whipped the crowd into a frenzy.

“My favorite part [of the night] was kissing my lovely baby, who is called Stella,” McCartney told the Cut after his cameo. “[Stella] is a wonderful, talented, hardworking mother of four, who runs a fashion empire. We don’t know how she does it, but she does. And I love her.”

At the evening’s host, Stella floated among her stylish guests and appeared to be having the best time. Wearing an elegant black mini-dress with voluminous sleeves, she greeted friends and thanked the cover band, shimmying and enjoying the fruits of her labor. “Stellaaaa-brate good times, come on!” she quipped. What was her highlight of the evening? “I think my father, getting up and rocking out. I mean, hell!”

Talking to Katy Perry at a Star-Studded Fashion Show
parties! Yesterday at 5:22 p.m.
Pauline Chalamet, Tessa Thompson, and More of the Bestest Party Pics This Week Partying with Guerlain, Marni, and more.
life after roe Yesterday at 3:38 p.m.
The Future of Abortion Pills Is on the Line One Trump-appointed judge holds the power to effectively ban medication abortion even though the U.S. approves its use up to ten weeks into pregnancy.
spring fashion Yesterday at 3:00 p.m.
Ella Emhoff’s Other Plus One Her always-present Secret Service detail.
style Yesterday at 2:41 p.m.
At Marc Jacobs, a Generous, Life-Enhancing Fashion History Lesson The designer’s latest show, “Heroes,” celebrated the the late Vivienne Westwood.
in memoriam Yesterday at 2:33 p.m.
Paco Rabanne Has Died The revolutionary fashion designer was 88.
spring fashion Yesterday at 2:00 p.m.
11 Spring Bags, From $7 to $7,900 This season’s most compelling bags, from Forever 21 to Hermès.
best in class Yesterday at 1:50 p.m.
16 of the Very Best Water Bottles Always be hydrating.
By Emma Wartzman
valentine's day Yesterday at 1:20 p.m.
The 21 Best Last-Minute Valentine’s Day Gifts Where and when to get them.
friday sales Yesterday at 1:06 p.m.
20 Things on Sale You’ll Actually Want to Buy: From Klorane to Patagonia Including a heart-shaped mini waffle maker, our favorite cream-blush stick, and a moisturizer packed with snail mucin.
valentine's day Yesterday at 12:14 p.m.
19 Nontraditional Valentine’s Day Gifts Give something unexpected this February 14.
spring fashion Yesterday at 12:00 p.m.
Mei Kawajiri’s Very Extreme Nails  Her completely over-the-top talons landed her features in magazines and gigs backstage for Marc Jacobs, Tom Ford, Miu Miu, and Moschino.
By Maya Allen
fashion Yesterday at 11:59 a.m.
Do Not Show Up Late to the Marc Jacobs Show Lourdes Leon was apparently denied entry for arriving after the doors closed.
keeping up with the royals Yesterday at 10:53 a.m.
Will Harry and Meghan Get to Go to the Coronation? Sources suspect they’ll be invited; whether or not they accept is another question.
q & a Yesterday at 10:00 a.m.
Rachel Bilson Has Some Notes for The Bachelor The Accused actress and podcast host also talked about reuniting with her O.C. co-star Mischa Barton.
a choice? Yesterday at 10:00 a.m.
What Is Going On With Austin Butler’s Voice? I fear he may be stuck talking like Elvis forever.
extremely online Yesterday at 9:40 a.m.
I Can’t Shut Up About About Nancy Pelosi’s Hot-Dog Diet The former House Speaker also endorses ice cream for breakfast.
spring fashion Yesterday at 8:00 a.m.
The Woman Who Became McQueen The quiet ascendance of Sarah Burton.
By Cathy Horyn
culture Yesterday at 8:00 a.m.
This Is Pamela, Finally The model-actress’s memoir and documentary reveal only what she wants us to know. It’s about time.
By Roxane Gay
the wedding files Yesterday at 7:00 a.m.
At Georgia O’Keeffe’s Ghost Ranch, an ‘Epic’ Wedding No speeches, just dancing.
By Kaitlin Menza
¡hola papi! Yesterday at 6:00 a.m.
‘I Feel Abandoned by My Friend’ Hopefully the two of you can have a productive conversation that leaves you both in a healthier place.
By J.P. Brammer
More Stories