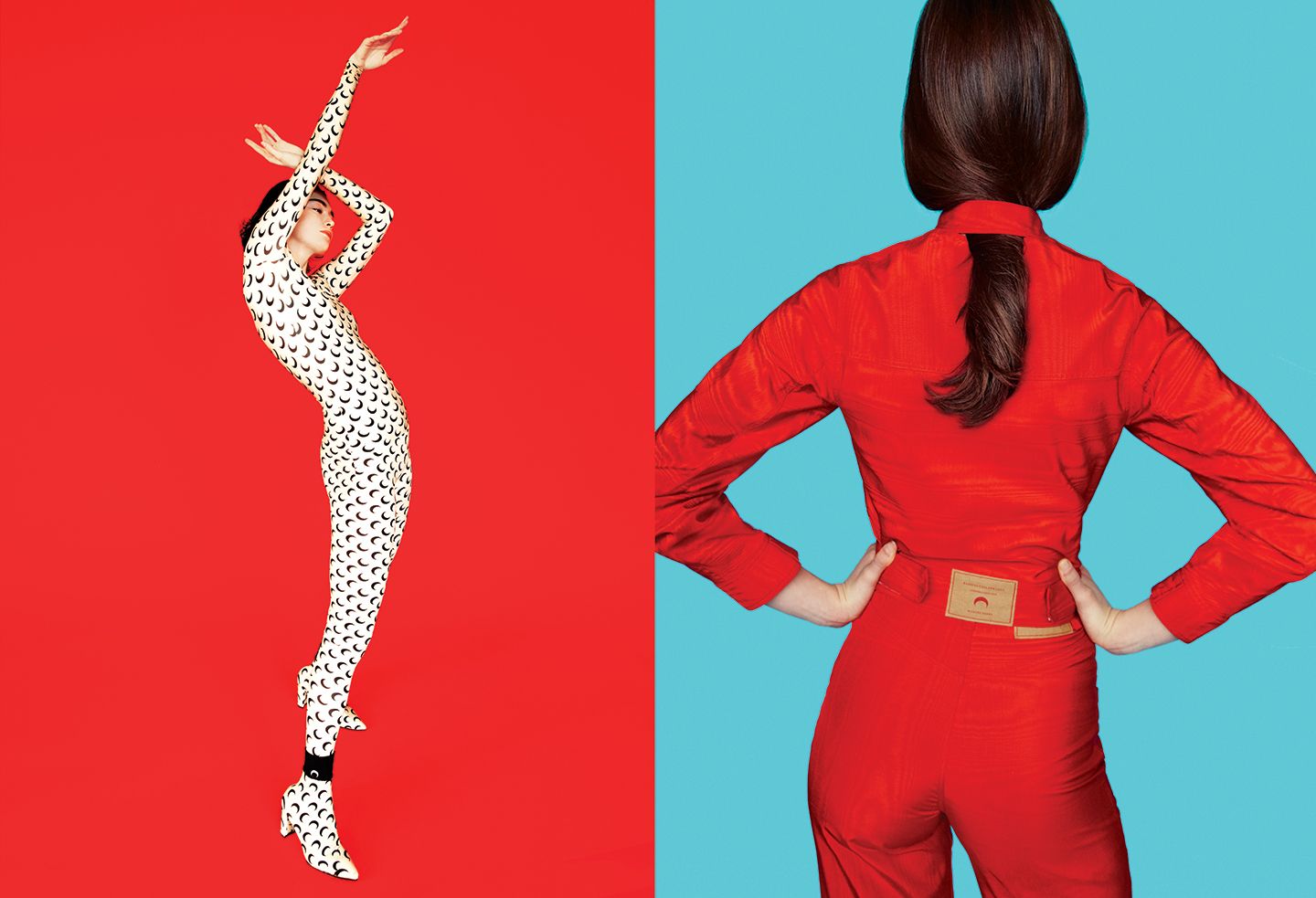 The Moon Over Marine Serre

The cornerstone of Marine Serre’s 2016 graduation collection from La Cambre, the Belgian design school, was a print of a tiny crescent moon. Although the celestial symbol has links to a number of cultures and religions, it is most commonly associated with Islam, and it was in that context that Serre used it in her collection, which she named “Radical Call for Love.” Born in 1991, Serre is French, part of a generation that has grown up fearing terrorism but also the reaction to terrorism. The attacks in Paris in November 2015 and in Brussels four months later occurred during her final year at La Cambre. Her collection, which included references to 19th-century dress and contemporary sportswear, was a response to those events, although Serre stopped short of calling it a political statement.

Sitting on the jury at the La Cambre student show was Romain Joste, who, with Anaïs Lafarge and Guillaume Steinmetz, founded the Paris concept store the Broken Arm. Joste, unable to pinpoint the exact feelings Serre’s collection had elicited in him — a plus in his view — invited her to meet his partners in Paris. There, they offered to put some of her garments in the shop’s windows during Fashion Week. In 1984, a London boutique had done the same thing for a guy named Galliano. The Broken Arm owners also told Serre they’d help pay to produce the roughly 15 styles.

“Radical Call for Love” was only Serre’s second collection, yet she was now in the same store as big names like Balenciaga, Loewe, Céline, and Raf Simons. Among those who stopped by was Adrian Joffe, the president of both Dover Street Market International and Comme des Garçons International, the label designed by his wife, Rei Kawakubo. He offered to carry Serre at Dover Street and to help with production costs. By last fall, when Dover Street opened Marine Serre pop-up shops in four international locations, the designer had won the LVMH Prize for the same work, collecting roughly $357,000. The moon print was often spotted in the crowds at New York and Paris Fashion Weeks.

“Radical Call for Love” demonstrated that, before she even had a business, Serre had created a brand. What’s more, the moon print could be read in the context of Islamic iconography or as a kind of Pop graphic, just as her wide headbands could be read as a take on an athletic band or a hijab. Serre, who will hold her first proper show this February, during the Paris collections, told me, “There are people who think the print is quite radical, and there are others who don’t know anything about politics and think it’s just cute. And this is exactly what I love.”

*This article appears in the January 8, 2018, issue of New York Magazine.

+Comments Leave a Comment
The Young Designer Captivating Fashion’s Toughest Crowd
astrology 8:30 p.m.
Madame Clairevoyant: Horoscopes for the Week of August 15 As Mars enters mercurial Gemini, you may find yourself easily distracted. Fighting it will only make it worse.
By Claire Comstock-Gay
sex diaries 8:00 p.m.
The Artist Who’s Not Sure She Loves Her Comedian Boyfriend This week’s sex diary.
r. kelly 5:47 p.m.
R. Kelly Denies One of His Alleged Victims Is Pregnant With His Child After identifying herself as the singer’s fiancée, Joycelyn Savage claimed she’s pregnant with his child.
rip 3:51 p.m.
Freya the Walrus Was Too Good for This World The summer icon has been euthanized by Norwegian officials.
rust 1:40 p.m.
Everything We Know About the Rust Shooting An FBI report concludes that the trigger must have been pulled.
shopping Aug. 12, 2022
The $6 Brow Product That Changed My Eyebrows It took me almost a decade to find the perfect brow product.
obits Aug. 12, 2022
Anne Heche Has Died at 53 The actor suffered severe injuries after a car crash in L.A. earlier this month.
fashion Aug. 12, 2022
Julia Fox Is Back! And she is giving us the latex looks we’ve been so thirsty for.
feminism Aug. 12, 2022
Who Actually Lost the Sex Wars? And were there any winners? A conversation with Christine Emba, Nona Willis-Aronowitz, and Lorna Bracewell.
friday sales Aug. 12, 2022
19 Things on Sale You’ll Actually Want to Buy: From Ninja to Isabel Marant Including the most effective foot peel and some Chuck 70’s for just $35.
i'd buy that Aug. 12, 2022
Drop Everything, Joan Didion’s Estate Sale Is Coming How much would you pay for a mohair throw that once graced her couch?
do i need this? Aug. 12, 2022
Do I Need Lori Harvey’s Gym Outfit? I couldn’t get with Pilates, but this I can do.
breakups Aug. 12, 2022
Michelle Branch Announces Her Separation From Black Keys’ Patrick Carney Branch was arrested for misdemeanor domestic assault shortly after the announcement.
selling sunset Aug. 12, 2022
Looks Like Jason Oppenheim Has Also Moved On Surprise: His new girlfriend isn’t an O Group agent.
celebrity Aug. 12, 2022
Kim Kardashian Bravely Takes Shot On-Camera Behold, the face of someone who’s made a huge mistake.
extremely online Aug. 12, 2022
I Can’t Shut Up About This Photo of Austin Butler’s Girlfriends Vanessa Hudgens and Kaia Gerber met each other long before they both dated Butler.
5 questions with... Aug. 12, 2022
Chanté Adams Is Redefining A League of Their Own The star hits a home run in Prime Video’s new series.
parties! Aug. 12, 2022
Beyoncé, Remi Bader, and More of the Bestest Party Pics This Week Celebrating the release of Renaissance, the launch of the Remi x Revolve collab, and more.
seeing someone Aug. 12, 2022
Help! Both Women I’m Seeing Want to Be Instagram Official You don’t have to “launch” a relationship if you don’t want to.
By Randa Sakallah
style Aug. 11, 2022
Hey Fashion Friend: How Do I Wear Fashion Cargo Pants? We provide you with 15 non-ironic pairs to go with your tiny shirts.
More Stories