There’s arguably never been a bad time to be a man, but now is a particularly great time to be a man with money to spend and a closet to fill. The fall 2018 menswear shows wrapped in Paris this weekend, and it is clear that the days of simple suits and ties are long gone — or at least not the only thing being offered. Menswear has blossomed into its own strange, beautiful beast. Below, a breakdown of the weirdest and most wonderful trends to try.

Being Able to Sleep Anywhere

Sleep is life’s greatest luxury, and fashion should allow us to indulge in it at all hours of the day, wherever we are — whether that means dressing like a pillow or carrying one as an accessory.

Blending-in is the new standing-out, as evidenced by this new plethora of busy camouflage-prints. Kanye West showed camo as a part of his Yeezy Season 5 collection, and wouldn’t you know it? It’s everywhere now! We would not recommend taking a hiking trip in these looks.

You’re an animal, baby! It is likely that in the near future, you will swipe through Tinder or Raya and find a photo of a man wearing one of these masks as a cheeky disguise. Left!

Designers are preparing us for our inevitable Fashion Week on Mars, or the end of the world as we know it, with these space suits and hazmat outfits.

Apparently, print is not dead. It’s just been reduced to a fashion trend … that has nothing to do with actually reading or buying print publications.

Maybe now that it’s 2018, we can just let men have what they’ve wanted this whole time, which isn’t fanny packs but actually just a nice handbag. Let’s not even call it a “murse.”

If you think about it, skirts make perfect sense for men. Let it all breathe!

ICYMI, Uggs are back. Again. On November 10, 2017, Cardi B announced on Instagram that it was “officially Ugg season.” At the start of Paris men’s week, designer Heron Preston shared on Instagram a photo of himself wearing Ugg boots with the caption, “We not playing games no more.” And then not one but two designers proceeded to show Ugg boots on the runway. Sacai casually incorporated the shoes into its fall collection, while the young Parisian brand Y/Project debuted extreme, never-before-seen styles like scrunched knee-high boots. 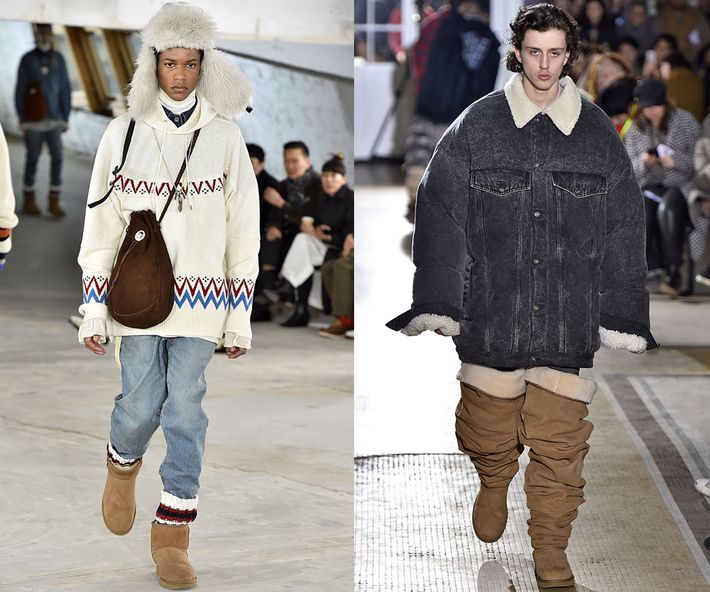 We not playing games no more

Not Getting Run Over

Designers like Heron Preston have been riffing off of workwear for a while now, and the latest iteration includes reflective stripes that resemble those worn by traffic cops. The good news is, you won’t be hit by a bus anytime soon.

Going Wherever the Hell This Guy Is Going

18 Trends That Are Going to Be Huge This Year

power 7:24 p.m.
Marilyn Manson Accused of Sexually Assaulting a 16-Year-Old Girl In a statement from his attorney, Manson denied allegations he sexually assaulted a minor in 1995.
tyre nichols 5:05 p.m.
A Sixth Officer Has Been Suspended After Tyre Nichols’s Death: Updates The officer was relieved of duty the same day the five officers charged with murder were fired for the beating.
hairy situations 3:46 p.m.
Wait, So Now Even My Hair Is Aging? Ugh.
By Parizaad Khan Sethi and Shanna Shipin
documentaries 1:31 p.m.
‘For So Long, I Had Larry in My Ear’ In an exclusive clip from Hulu’s Stolen Youth docuseries, Larry Ray survivor Felicia Rosario opens up about the impact of his gaslighting.
keeping up with the royals 12:37 p.m.
Could the Spice Girls Get Harry to the Coronation? Sources are saying the palace is “super keen” to get “Britain’s biggest girl band” involved.
sparking joy 11:00 a.m.
Marie Kondo Has ‘Kind of Given Up’ on Being Neat Validation for messy homes everywhere.
transgender rights 10:59 a.m.
Utah Bans Gender-Affirming Care for Trans Youth Already this year, Republican lawmakers have proposed more than 150 bills limiting the rights of trans people.
spring fashion 8:00 a.m.
The Promise of Pyer Moss Kerby Jean-Raymond was one of fashion’s most celebrated young designers. Then what happened?
By Tahirah Hairston
spring fashion 8:00 a.m.
It’s Glo Time Grammy nominee GloRilla is figuring out how to be famous while staying F-R-E-E.
By Tirhakah Love
spring fashion 8:00 a.m.
The Hustle of Women in Hip-Hop Editor-in-chief Lindsay Peoples on launching the celebration of 50 years of women in hip-hop who’ve changed the game.
By Lindsay Peoples
how i get it done 7:00 a.m.
How Political Commentator Molly Jong-Fast Gets It Done “We’re a pretty sedentary bunch, but we do a lot of dog-walking. Also, I try to visit my mom once or twice a week depending on how guilty I feel.”
sex diaries Yesterday at 8:00 p.m.
The Creative Director Getting a Little Tired of Feeld This week’s sex diary.
snl Yesterday at 3:48 p.m.
Michael B. Jordan Is a Different Kind of Jake From State Farm See him rock the red polo and khakis on SNL.
celebrity couples Yesterday at 12:28 p.m.
This Good Morning America Romance Keeps Getting Messier Amy Robach and T.J. Holmes are out at ABC.
astrology Yesterday at 8:30 a.m.
Madame Clairevoyant: Horoscopes for the Week of January 30 The overarching astrological story right now is one of growth, action, and following through on intentions.
By Claire Comstock-Gay
spring fashion Jan. 27, 2023
12 Ways of Looking at André Leon Talley The friendships and love stories found inside his estate auction, as told by Anna Wintour, Marc Jacobs, and Tom Ford, and more.
By Cathy Horyn
wait what is happening on tiktok? Jan. 27, 2023
Everything We Know About TikTok’s Lashgate Drama Did Mikayla Nogueira add false lashes or not?
parties! Jan. 27, 2023
Teyana Taylor, Anna Camp, and More of the Bestest Party Pics This Week Parties with Gucci, Sundance, and more.
gone sale-ing Jan. 27, 2023
10 Things You Don’t Have to Pay Full Price for This Week Deals from Dyson, Nordstrom, Shopbop, and more.
friday sales Jan. 27, 2023
19 Things on Sale You’ll Actually Want to Buy: From Lunya to Areaware Including fuzzy Birkenstock clogs, a teensy Cricut heat press, and our favorite weekender bag from Patagonia.
More Stories