Meet You on the Corner of Hype and Mercer

Two blocks in Soho have become a fashion destination for streetwear-obsessed boys. 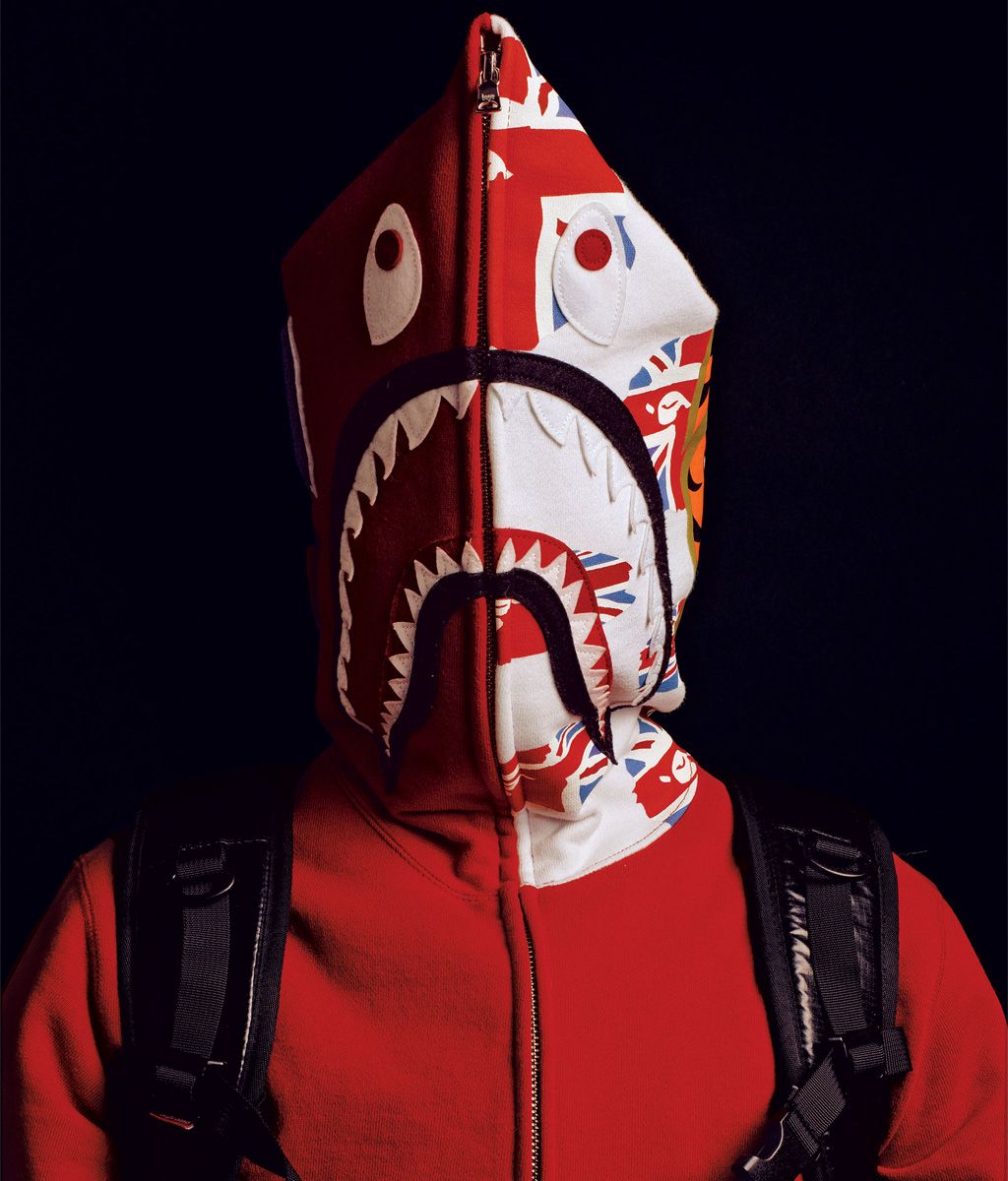 If I were the mother of a teenage boy who owned more than three pairs of sneakers and spent longer than 60 seconds looking at himself in the mirror each morning, the intersection of Mercer and Howard Streets in Soho is where I would go looking for him if he ever went missing.

In the past few years, these off-Broadway streets have become a destination for fashion-curious men (and some women) who want to buy into streetwear culture and its many forms, from graphic skate tees to Adidas sneakers designed by Kanye West. Stores including VFiles, Stadium Goods, Billionaire Boys Club, Palace Skateboards, NikeLab 21M, and Off-White create an outdoor mall for items such as these, which are particularly hyped among young people for their relative affordability and constant supply. Unfortunately, the same cannot be said of the French designer Agnès B., whose humble storefront sits smack in the middle of all this.

Long lines for “drops,” or timed releases of limited-edition items, plus in-store events hosting celebrities like Justin Bieber, flood the area with stylish locals, tourists, and the occasional parental chaperone. At least one amateur photo shoot is happening at all times, and at around 5 p.m., multiple store employees report, the distinct smell of marijuana tends to waft throughout the area.

For buying clothes and clout.

Artist Barbara Kruger hosted her most recent show, Untitled (The Drop), in the form of a pop-up at the corner of Howard and Broadway this past November, as a parody of Soho’s long lines for drops — particularly those at Supreme, whose boxy logo bears an uncanny resemblance to Kruger’s own work. Sure enough, Pavlovian hypebeasts joined the back of her long line, just to see what the fuss was all about.

“In my mind, for this culture, this is the New York shopping destination,” declares John McPheters, the CEO and co-founder of Stadium Goods, which opened at 47 Howard in 2015. “For a long time, I think people looked more toward Lafayette, where Supreme was, and that’s a great area to shop,” McPheters says, referencing the original streetwear mecca, which first opened in 1994. “But I think we have something that’s decidedly a little newer; there’s a different type of energy happening here.”

“Mercer is youthful and fashion-forward,” says VFiles founder Julie Anne Quay, who’s worked near this Soho intersection since the ’90s — she was the executive editor at V magazine, which makes its home at 11 Mercer. She opened VFiles in 2012, when the only other “downtown cool” stores in the area were Opening Ceremony and Alexander Wang. “These kids know everything about sneakers, who’s wearing what, and what’s dropping,” she adds.

In addition to being an emerging menswear hub, the corner of Mercer and Howard is a place to see and be seen — or cultivate “clout,” a word that’s been reinserted into the popular lexicon as a replacement for “influence” both IRL and online. Certain sneakers, for example, depending on how hard they are to acquire and which celebrities they’re associated with, can gain you clout. Meanwhile, a pair of white, Kurt Cobain–esque sunglasses have been deemed “clout goggles.” In 2018, clout is inextricable from style, which is why we’re calling this particular Soho area the Clout Corridor. It’s here that young people are linking, building, and, most important, buying.

What stops have you made today?
We went to the Off-White Em Pty Gallery on Mercer, then we went to Palace, and then we came to Stadium Goods.

What did you buy?
I bought a hoodie from the new Off-White collection. It was the cheaper collection, so it was $170 instead of, like, $600. And I got the Pot Palace T-shirt.

What do you think about that, Mom?
Joan Halpern: Is that really what it is?
Grant: It’s not weed, it’s just the plant design.
Joan: There was one with a naked woman on it, and I was like, “No! Stay away from that one.”

“I used to hang out in Soho in 2014 and 2015, but now I’m not really around here a lot. I come back like twice a month or something. Back then, it was just a place where all the kids would go. We really wouldn’t buy anything, because we didn’t have money. We were just fucking around, basically. We’d meet at Prince and Mercer. You could sit outside the Mercer Hotel and get free Wi-Fi and people think you’re important because you’re sitting outside the Mercer Hotel.”

How often do you come to this area?
I’m here at least three or four times a week. It’s where I feel like I can be myself and walk around in a wild outfit and not have to feel like, Oh my God, how am I going to sit like this in class? I can be me here.

Where did you get those glasses?
I got them last Tuesday at Opening Ceremony, and they’re George Keburia. I’ve been wanting them for a while, and then Solange wore them on the cover of Surface magazine and I was like, I need them!

What about the rest of your outfit?
My bag is vintage Dior, and I got it from American Two Shot. I didn’t like the strap — it was very 2000s — so I put on a strap from another bag. My sweatshirt is BlackEyePatch. It’s this really cool underground brand from Asia. This lock is vintage Louis Vuitton. I got it off eBay for Christmas. I might give the key to a boyfriend someday or one of my best friends.

*This article appears in the January 22, 2018, issue of New York Magazine.

The Soho Intersection That’s Become a Streetwear Destination
are u coming? 13 mins ago
Straight-Boy Swooning Over the East Villains TikTok Crew Guess which one’s nickname is “Phantom Smoocher”?
By Brock Colyar
5 questions with... 11:04 a.m.
Tonya Lewis Lee Spotlights the Black Maternal-Health Crisis in Aftershock The documentary’s co-director explores health advocacy through art.
climate change 10:01 a.m.
What to Know About the New Climate Deal The Senate just passed the country’s most ambitious climate legislation to date.
lies 9:53 a.m.
Alex Jones Owes Over $49 Million for His Sandy Hook Lies After a jury ordered him to pay one victim’s parents $45.2 million in punitive damages.
how i get it done 7:00 a.m.
Sounds Like Working at LEGO HQ Is As Fun As You’d Imagine “We have LEGO bricks in every conference room. It’s encouraged in meetings that we make playful games.”
By Olivia Luppino
astrology Yesterday at 8:30 p.m.
Madame Clairevoyant: Horoscopes for the Week of August 8 On Thursday night, a full moon in Aquarius ignites your rebelliousness.
By Claire Comstock-Gay
sex diaries Yesterday at 8:00 p.m.
The Grad Student Who Meets Someone on Facebook Marketplace This week’s sex diary.
ugh why Yesterday at 6:19 p.m.
Kevin Federline Has Some Issues With Britney Spears’s Instagram Spears responded, calling his statements “hurtful.”
celebrity Yesterday at 3:33 p.m.
Kardashian News Drop: A Baby and a Breakup Khloé Kardashian welcomes another baby as Kim Kardashian and Pete Davidson reportedly break up.
celebrity Yesterday at 12:41 p.m.
Kim Kardashian Reportedly Resigned As Queen of Staten Island Her nine-month relationship with Pete Davidson is allegedly done.
backlash Aug. 5, 2022
What Is Going On With Jackie Aina? Her latest Forvr Mood collection was supposed to be an ode to Nigerian culture. Some fans aren’t sold.
celebrity beauty encyclopedia Aug. 5, 2022
An Encyclopedia of Celebrity Beauty Brands Here are over 60 products that famous people have made for your face.
By Daise Bedolla, Kathleen Hou, and Erica Smith
friday sales Aug. 5, 2022
20 Things on Sale You’ll Definitely Want to Buy: From Everlane to Patagonia Including two deals exclusively for Strategist readers.
parties! Aug. 5, 2022
Karen Pittman, Naomi Watts, and More of the Bestest Party Pics From the Week All of our favorite looks to kick off August.
hairy situations Aug. 5, 2022
Doja Cat Doesn’t Think Hair Is ‘Cool’ So she shaved it all off — in front of her followers.
much to think about Aug. 5, 2022
Big Sean Vexed by Big Questions Science has confirmed what the rapper has long sensed is true: Earth’s rotation is speeding up.
fashion Aug. 5, 2022
Want Design Porn? Go to Shelter Island, Ask for Louis Vuitton. A pop-up showcasing the brand’s finest classic bags, furniture, and décor is summering on the island.
always shopping Aug. 5, 2022
21 Leggings for Any Type of Workout Because leggings can make or break a workout.
By Bianca Nieves and Anne Cruz
extremely online Aug. 5, 2022
I Can’t Shut Up About This Pickle An artist flung a pickle from a McDonald’s cheeseburger onto an art-gallery ceiling and was selling it for $6,275.
family Aug. 5, 2022
My Mom Has No Friends The loneliness of growing older made bearable with playdates.
More Stories