On Sunday, Outdoor Voices founder Tyler Haney got mad online. The 20-something-year-old leader of the color-blocked leggings movement “finally” felt compelled to address what she labeled the umpteenth “copycat” of her designs, with Bandier’s new We Over Me line being the straw that broke the camel’s back.

“Each style in Bandier’s ‘new’ line is a rip of an Outdoor Voices style,” Haney wrote on her Instagram stories. “Embarrassed for you. People should boycott everything about you.”

Boycott they did. After Bandier shared a photo of its We Over Me collection on Instagram, the Outdoor Voices hive went to work, with many calling upon the vigilantes behind Diet Prada to step in.

“OV is coming to end you bandier,” wrote one particularly aggressive commenter.

“Not doing things!” wrote another, playing on the Outdoor Voices catchphrase, “Doing things.”

Meanwhile, some pointed out that Outdoor Voices “didn’t invent color blocking” — a sentiment that Bandier CEO Neil Boyarsky also expressed in interviews with both Fast Company and Racked.

Outdoor Voices and Bandier were both founded in 2014 and share a similar price point in addition to aesthetics. But as Haney explained to Fast Company, it’s not the appearance of color-blocking in Bandier’s new collection that upsets her, rather the copying of the technical construction behind said color-blocking.

“Color-blocking is not the issue,” Haney said. “If you go piece by piece through the 12 pieces they launched, the style lines, and construction of the garment are a ripoff-of OV. We make technical, functional product, so all of the seaming is completely intentional, and the color blocking emphasizes where the different panels within the product are.”

According to Julie Zerbo of The Fashion Law, if Outdoor Voices’ construction technique is, in fact, novel, it could give rise to a patent infringement claim. “Utility patents cover new and useful aspects of products,” Zerbo explained to the Cut. “But OV would have to actually have a patent in order to make such a claim.”

Boyarsky countered in an interview with Fast Company that Bandier used different fabrics for its leggings, and that the company was simply responding to an industry-wide “trend” adopted by brands like Fabletics and Old Navy.

But what if it was Outdoor Voices that started this trend? Either way, color-blocked leggings are tearing us apart. 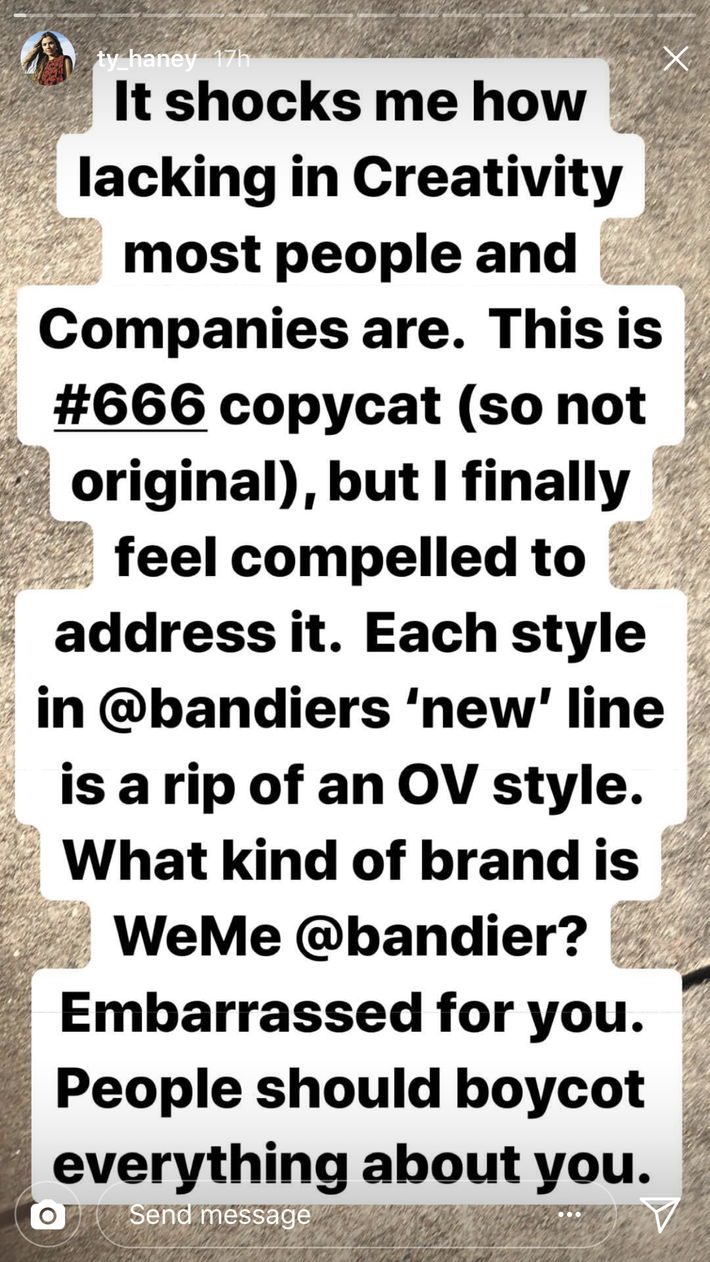 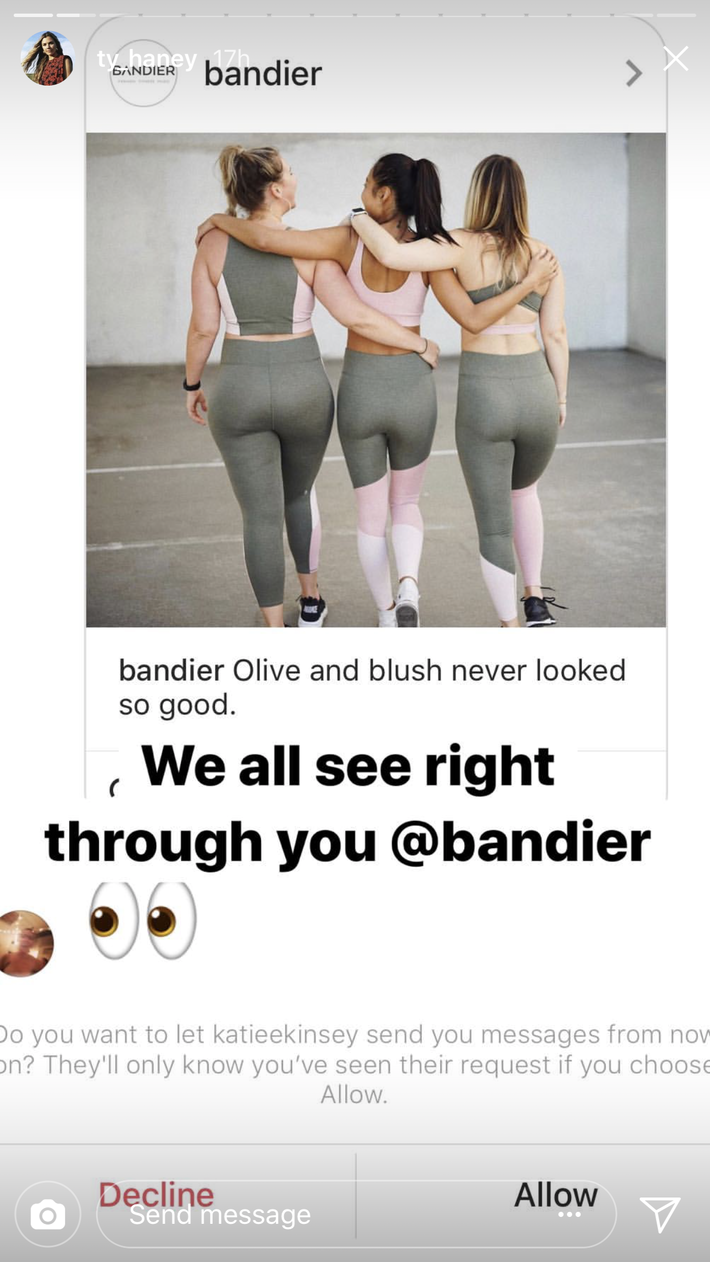 This post has been updated to include a quote from Julie Zerbo.

See All
covid-19 7:00 p.m.
When Will Kids Be Able to Get the COVID Vaccine? The FDA has authorized the Pfizer vaccine for children ages 12 to 15.
duh 6:37 p.m.
Shockingly, No One Thinks ‘Instagram for Kids’ Is a Good Idea 44 attorneys general are urging Mark Zuckerberg to please abandon his plans for a 13-and-under version of the app.
comedy 4:53 p.m.
John Mulaney and His Wife, Annamarie Tendler, Are Divorcing Who will have custody of Petunia?
sneakerheads 4:45 p.m.
30 Pairs of Sneakers to Buy Right Now There’s no one sneaker trend for spring 2021, and that makes it all the more fun.
By Andrew Nguyen
skin deep 3:33 p.m.
John Legend Loves His Wife and Her Beauty Products “I’m married to a woman who deals with a lot of challenges on social media, to say the least.”
scent memories 3:28 p.m.
For Saweetie, Friendship Smells Like Strawberry Cupcakes Catching up with the rapper and face of SinfulColors’ scented nail-polish line.
By Erica Smith
bennifer 3:10 p.m.
It Looks Like Bennifer Is Back The former fiancés were photographed holding hands on a recent trip to Montana.
i hate it here 2:28 p.m.
Jeff Bezos’s New Yacht Comes With Its Own Yacht? The $500 million superyacht is among the largest ever built.
girl groups 1:09 p.m.
She Wanted to Be a Pop Star. Now She Gets to Play One on TV. The Tony-winning Renée Elise Goldsberry is the MVP of the witty new series Girls5eva.
tv 12:44 p.m.
Oprah and Prince Harry Made a TV Show The Me You Can’t See sees the duo interviewing a host of celebrity guests about mental health, and opening up about their own struggles.
celebrity 11:50 a.m.
Notorious Cheater Has Allegedly Cheated Again The latest drama with Tristan Thompson and Khloé Kardashian keeps getting messier.
my brain hurts 11:21 a.m.
Okay, This Is Definitely Cheugy The term’s creator is selling the word as a now heavily discounted NFT.
finer things 11:12 a.m.
There’s No Such Thing As Too Much Color Especially when it comes to accessories.
By Emilia Petrarca
celebrity babies 10:19 a.m.
Samira Wiley and Lauren Morelli Had a Baby! A baby girl named George.
sexual misconduct 8:54 a.m.
Seth Rogen Says He Doesn’t Plan to Work With James Franco Following Allegations “What I can say is that I despise abuse and harassment, and I would never cover or conceal the actions of someone doing it.”
power 8:00 a.m.
Tarana Burke Is Just Trying to Do Her Work A long talk about Black women, Me Too, and intentions with the activist and founder.
By Shamira Ibrahim
how i get it done 7:00 a.m.
Wendy Williams Will Text You First “I don’t have time to talk about me. I got to get to the next story.”
By Kerensa Cadenas
astrology Yesterday at 8:30 p.m.
Madame Clairevoyant: Horoscopes for the Week of May 10 Make the most of a new moon in stubborn Taurus and Jupiter entering compassionate Pisces.
By Claire Comstock-Gay
sex diaries Yesterday at 8:00 p.m.
The Graphic Designer Who Won’t Have Sex Until the Third Date This week’s sex diary.
first person May 8, 2021
The Version of Myself My Mother Knew The more milestones I reach without my mom, the further from her I get.
By Pia Araneta
More Stories