Out of the Box: Lounging in the Season’s Most Beautiful Clothes

A fashion shoot staged in London. 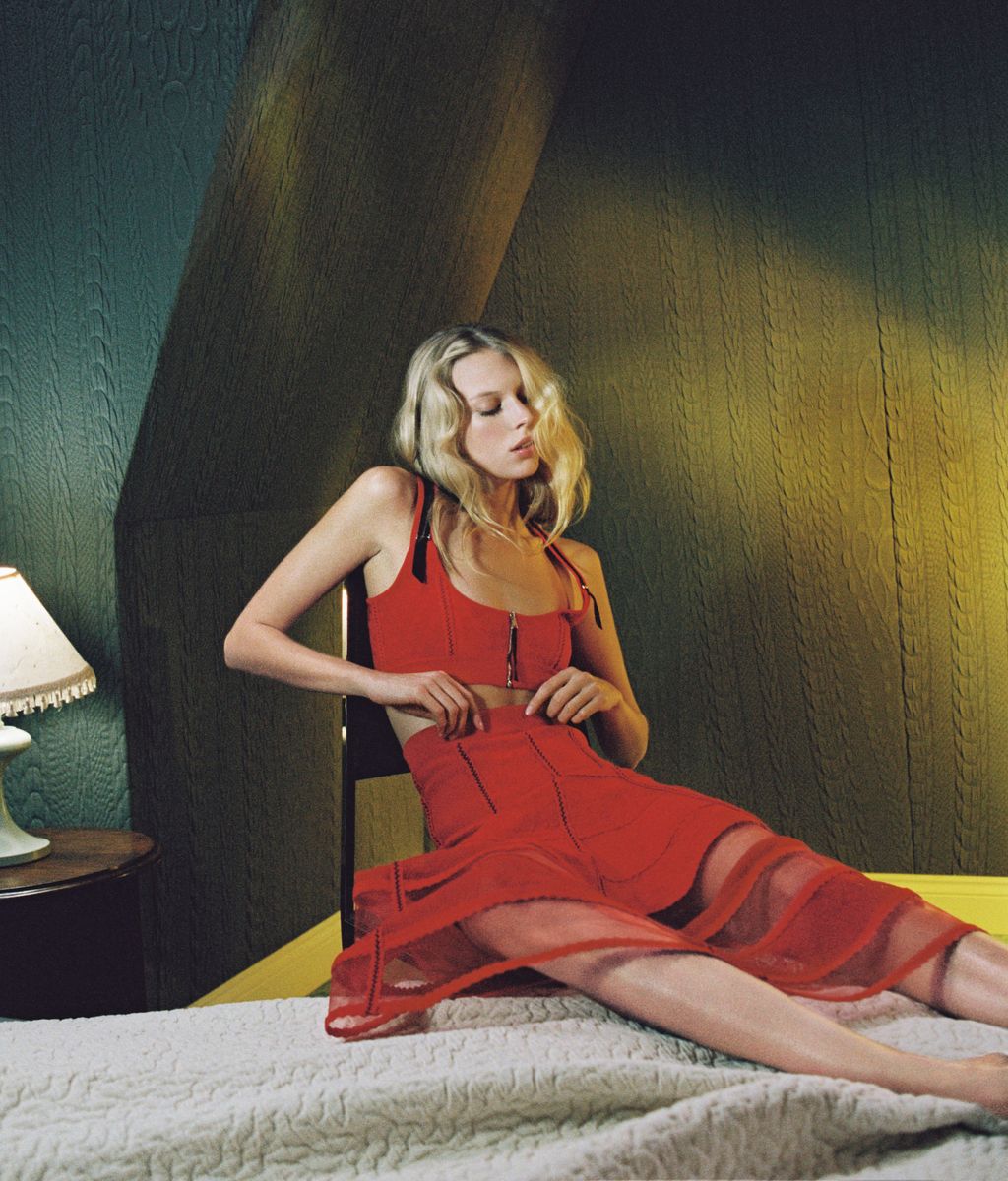 Imagine a Hollywood actress off duty, lounging in her hotel room, and you might picture a glamorous scene like the fashion shoot below. Photographer Cornelius Käss staged the platonic ideal of chic relaxation for this portfolio — the latest edition of the Cut’s “Out of the Box” photography series, in which our fashion editors send artists to a location of the photographer’s choice with a box of the season’s most luxurious clothes (with the creative freedom to photograph them however they’d like).

In these portraits, Käss creates drama between model Juliana Schurig’s surroundings and the sumptuous fabrics. He transformed an East London photo studio into a hazy hotel room, where knit-textured walls and soft blankets showcase the metallic-blue sheen of a DVF dress or the pastel threads on a black velvet wrap by Josie Natori. Colors pop and textures react to the rare presence of light, spotlighting pieces like a silky Gucci pajama top, or a bold red jacquard skirt by Alexander McQueen.

“I wanted to portray a certain loneliness,” Käss says, explaining his cinematic use of the setting. “A special moment, which Juliana feels within a small, intimate hotel room. I wanted to play with light and color and find the best possible setting to make all ingredients work together.” The result is a story with no narrative. The woman just exists: alluring, independent, and alone, wearing all the clothing we’d like to own. —Carolyn Twersky

+Comments Leave a Comment
A Cinematic Take on the Season’s Most Beautiful Clothes
lawsuits 6:00 p.m.
Amber Heard Asks the Court to Set Aside the Defamation Verdict A new filing from her attorneys claims the verdict was not supported by evidence.
celebrity 5:06 p.m.
Ricky Martin Denies Allegations Resulting in a Protective Order A rep called the allegations “completely false and fabricated.”
congrats! 1:34 p.m.
Lindsay Lohan Is Now a Married Woman “I am the luckiest woman in the world.”
day in the life July 1, 2022
The Anti-Wedding Wedding Planner Everything it takes to throw a “love party.”
for your consideration July 1, 2022
The Best Way to Spend the 4th of July Tips for enjoying the long weekend when you’re not in the mood to celebrate America.
parties! July 1, 2022
Selena Gomez, Emily Ratajkowski, and More of the Bestest Party Pics This Week This week: Marc Jacobs’s fall 2022 presentation, NFT parties, and Pride celebrations.
instagram worthy July 1, 2022
Expensive Elopements Are the New Dream Wedding The more elaborate — and exclusive — the better.
By Kate Willsky
fashion July 1, 2022
Virgil Abloh’s Vision, on Full Display at the Brooklyn Museum We chatted with “Figures of Speech” curator Antwaun Sargent, who worked on the exhibition with Abloh before the designer’s death.
power July 1, 2022
Everything to Know About the WNBA Star in Russian Custody Legal experts say Brittney Griner’s trial is likely to end in conviction.
explosions July 1, 2022
Goop Candles Continue Their Campaign of Terror in the Hamptons Two men reportedly caught fire in a Sag Harbor Goop store.
gone sale-ing July 1, 2022
Your July 4 Sale Shopping Guide That NuFACE you wanted? It’s on sale.
rsvp yes July 1, 2022
Winning the Wedding-Season Marathon How guests with fully booked weekends are getting through it all. (Excel, mostly.)
By Emilia Petrarca
the kardashians July 1, 2022
I Can’t Shut Up About ‘Krissing’ A TikTok trifecta: Kris Jenner, catchy audio, and being obnoxious.
By Mia Mercado
allegations July 1, 2022
All the Allegations Against Ezra Miller In the past few months, the actor has been arrested twice, repeatedly accused of physical assault, and accused of brainwashing a minor.
life after roe July 1, 2022
Are Social-Media Platforms Censoring Information About Abortion? Facebook and Instagram have been restricting and removing posts intended to help people seeking reproductive care.
encounter July 1, 2022
Becca Tilley Gets Her Rose Coming out to Bachelor Nation wasn’t easy, but it sure felt good.
By Katie Heaney
the grub street diet July 1, 2022
Rachel Antonoff Names Her Pies “I’m like, ‘Do you prefer Bob or Judy?’”
By Rachel Sugar
crime June 30, 2022
A Mother Pushing a Stroller Was Shot and Killed in Manhattan Investigators say 20-year-old Azsia Johnson was shot at “very close range” while on the Upper East Side Wednesday night.
5 questions with... June 30, 2022
Saucy Santana on the Formula for Going Viral Santana makes viral videos in one take. He does so by staying true to himself.
the body politic June 30, 2022
The Abortion Stories We Didn’t Tell How decades of silence left us unprepared for the post-Roe fight.
By Rebecca Traister
More Stories