Stormy Daniels Is to Trump As Trump Is to America

The distinction between porn-star news and presidential politics is blurrier than we think. 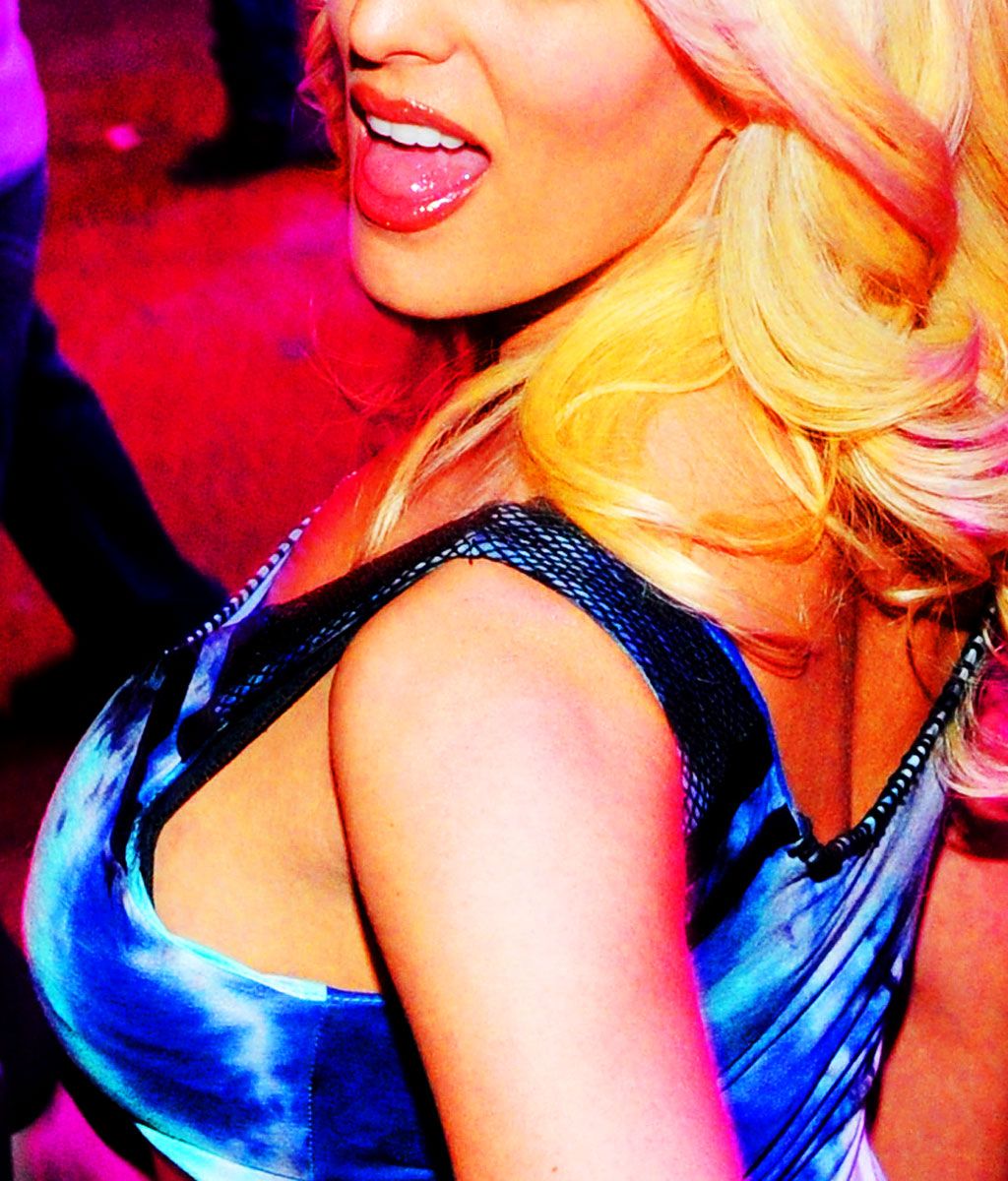 To understand what is happening in Trump World, pay attention to the women. Disregard any impulse to dismiss, trivialize, or even pity the women hovering around this administration, for they never fail to telegraph deeper truths.

When it comes to adult-film star Stormy Daniels (Stephanie Clifford), the media punditry is sticking to a simple mantra: Leave the sex out of it, focus on the politics. But what if the sex is inextricable from the politics? What if our zeal to extract sex from troubling events is actually what gets us into them in the first place?

Last week, as the commentariat combed over Donald Trump’s possible affair with Daniels and the alleged hush money paid to her, they frequently reminded us of how high-minded — how clean — we could all remain despite the muck. This story is not about breaking marital vows, they assured us; it’s about breaking the law, for if the Trump team redirected campaign funds to Daniels, it may have violated campaign finance law.

Consider some of the coverage: The Stormy Daniels story is actually “a follow-the-money story, whether or not you care about the sex part,” explained Rachel Maddow, neatly cordoning off “sex” into a “part.” Slate Group’s Jacob Weisberg, appearing on Maddow’s show, took care to note that such fare was “not [his] usual type of journalism,” before launching into all the details he’d uncovered.

On his show, Lawrence O’Donnell squeamishly held up the issue of In Touch featuring Stormy Daniels — barely letting his fingers touch the pages. It was, he assured us, the first time he’d ever held such a magazine in his hands. His disdain, though, did not stop him from flipping through the tabloid for several minutes, musing on its coverage of the Kardashians and celebrity lip-plumping.

The struggle between high- and lowbrow played out on daytime television too: On The View, Joy Behar’s volley of Trump-in-bed jokes amused everyone save co-host Meghan McCain who pleaded “Just stop it, you guys!” like a middle-schooler virtuously flustered by sex talk.

Late-night comedians also wrestled with good and evil: After Seth Meyers made comic use of Trump’s alleged remark that Stormy was “beautiful, smart, just like his daughter [Ivanka],” he made a great show of revulsion by appearing to chug Purell from a giant bottle. Stephen Colbert quoted the same Ivanka–Stormy comparison, and then displayed his disgust by pretending to vomit. Lesson: If you’re joking about incestuous desire, don’t forget to perform the obligatory disinfecting or purging ritual afterward. (At least they didn’t gouge their eyes out like Oedipus.)

The journalists and wits have a point: The Stormy story may be part of a far larger pattern of corruption, which must be investigated. And, yes, the story is both funny and unsettling. But maybe we should also investigate our collectively sophomoric reaction to it. America is acting as if it had been caught in an affair with a porn star: guilty, embarrassed, yet proud, and still entranced by the gossipy, salacious, lowbrow, self-indulgent pleasure of it all. And maybe we are catching ourselves in such an affair, for what is Donald Trump’s presidency if not proof that America has a fascination with salacious, lowbrow, self-indulgent pleasures — and someone who shamelessly embraces them all? Perhaps Stormy is to Trump as Trump is to America.

And let’s face it, with her gleaming white smile, pert features, shoulder-length highlights, ample bosom in fitted outfits, and heavily false-lashed eyes, she does not look completely unlike the First Daughter (as well as the First Lady, the First Daughters-in-Law, most Fox newswomen, and basically, the entire Trump-supporting corps of pulchritude). We might all notice that, but only our pre-Freudian president would blurt it out so unself-consciously.

Our interest then is entirely understandable. Of course we find the Stormy story delicious, riveting, confirmatory. Of course we understand why Trump, in Daniels’s presence, might have thought of his daughter. But America has real trouble with its darker impulses and fantasies. We prefer to enjoy them in secret, then decry them in public: Make the joke, then gargle with Purell. Read In Touch but swear it’s the first time. Elect Trump as our raging id of a president but be sure Mike Pence tags along as the censorious, superego VP.

This is America in a nutshell: We live in a Manichean universe, drawing clear lines between black and white, and dreading the blurry realm of gray. We shunt aside anything that smacks of moral impropriety, denying our ravenous appetites even while indulging them.

Yet things denied tend to come roaring back. Consider that while our Puritan culture censors even the mildest profanity on network television, our computer and cell-phone screens are aglow with every type of pornography imaginable, which kids hide from parents, and spouses from each other.

America has long seemed condemned to shuttle endlessly between these two planes, on which we exist simultaneously: the high-mindedly moral and the rank and embarrassing.

Then Trump happened. With his election, the wall dividing those two planes came crashing down. Trump is the return of all we repress. As Leader of the Free World, he performs, on the loftiest, most public stage, an ongoing revelation of all we try to keep private: our self-serving hedonism, our greed, social disconnection, our racism and misogyny. Where once we decorously tried to keep those weaknesses out of public discourse, with Trump they surge into mainstream news, causing much collective hand-wringing and jokey discomfort.

But it is our inability to weave a coherent public discourse, one that acknowledges both planes of our existence, that got us into this mess. As many critics have remarked, a large part of Trump’s appeal was, precisely, his apparent freedom to “say what we’re all thinking,” the vicarious relief of witnessing his heedless, pleasure-seeking life.

Think of the slogan: “Build that wall” — an exhortation to separate self from others, to live in a bubble of self-satisfaction, to idealize isolation. Think of the tax bill, which directs money away from social welfare and toward corporations (and their billionaire owners). These all reveal a pornographic refusal of empathy or engagement, a shunting aside of messy human need.

America was well conditioned to accept such a state of affairs precisely because we have practiced denial and compartmentalization for so long. Our puritanism, that is, permits and fosters the politically pornographic. And what feels like relief in Trump’s vulgar amorality is actually its opposite, it is the tightening of the noose of a dehumanizing, corporatized politics — tarted up and made palatable with the allure of vice.

Forbes, Trump, and Stormy form a perfect tableau of America today: We are indeed being spanked — beaten bloody, really — by our pornographically corporatized government — as led by cover model Trump.

But this condescension is misplaced: Ms. Daniels was launching a news conference— as proven by the media swarm she attracted to a South Carolina strip club.

It is at our own peril that we ignore or ridicule the powerful connection between Stormy Daniels and serious political matters. The distinction between porn-star news and presidential politics is blurrier than we think (a point made by the title of Ms. Daniels’s new show), as is the distinction between In Touch and Forbes, Stormy and Ivanka, us and them. Our gravest problems arise not from sin or sleaze, but from the impulse to wall ourselves off from what we perceive as undignified, which so often involves women, sex, and popular culture. Letting in the ambiguities, however uncomfortable, allows us to see connections between things, potentially allowing us to tear down the walls, and enjoy a richer, more integrated world.

Stormy Daniels Is to Trump As Trump Is to America
astrology 8:30 p.m.
Madame Clairevoyant: Horoscopes for the Week of November 28 Jupiter retrograde is ending, so you can put the rose-colored glasses back on.
By Claire Comstock-Gay
sex diaries 8:00 p.m.
The Divorced Lawyer Who Loves Getting Ready for Dates This week’s sex diary.
snacks Nov. 25, 2022
I Can’t Shut Up About Spam Figgy Pudding It’s so wrong, and yet so right.
gone sale-ing Nov. 25, 2022
25 Black Friday Lifestyle Deals to Make Your Humble Abode a Little Less Humble It’s all in the details.
black friday Nov. 25, 2022
22 Best Black Friday Fashion Deals From Everlane, Nordstrom, Saks, and more.
culture Nov. 25, 2022
Rebranding Midlife Celebrities like Naomi Watts, Stacy London, and Judy Greer are determined to make a business out of menopause.
gone sale-ing Nov. 25, 2022
36 Amazon Gift Ideas That Are Also On Sale For Black Friday Kill two bird with one stone.
5 questions with... Nov. 25, 2022
For Quentin Plair, Stripping Wasn’t Always on the Menu But the Welcome to Chippendales star’s confidence was renewed after playing an exotic dancer on TV.
gone sale-ing Nov. 25, 2022
The 27 Best Black Friday Beauty Deals Tatcha, Sephora, and Nordstrom are already offering some great discounts.
5 questions with... Nov. 25, 2022
How Amanda Gorman Fostered Her Confidence It didn’t always come naturally, but the poet built it with affirmations from her mom and using her imagery as activism.
¡hola papi! Nov. 25, 2022
‘I Lost My Creative Spark’ Don’t think about the book you haven’t written or the drawing you haven’t sketched out. Think about what role you want art to play in your daily life.
By J.P. Brammer
star material Nov. 24, 2022
A Handy Guide to Astrology’s Black Moon Lilith Lots of mystery and intrigue with this one.
5 questions with... Nov. 24, 2022
Pauline Chalamet Shares Her Most Embarrassing College Story Live lobsters were involved.
my two cents Nov. 24, 2022
How to Buy the Best Gifts With Less Money and Time It’s simple: Ask people what they want.
By Charlotte Cowles
celebrity Nov. 23, 2022
Pete Davidson and Emily Ratajkowski Hit a New Relationship Milestone The rumored couple reportedly celebrated Friendsgiving together.
chaos Nov. 23, 2022
Taylor Swift’s Ticketmaster Disaster Is Going to the Senate Congress will hold a hearing on competition in the ticketing industry.
ch-ch-changes Nov. 23, 2022
Alessandro Michele Confirmed Out at Gucci The creative director, who transformed the brand into a more playful, quirky, and gender-fluid version of itself, is exiting after almost eight years.
style Nov. 23, 2022
Is it a Crime to Go to the Met Gala? If you’re a sitting U.S. representative, the answer might be yes.
holiday gifts Nov. 23, 2022
These Nordstrom Black Friday Deals Should Be on Your Gifting Radar At every price point.
tis the season Nov. 23, 2022
Sir Elton John Lights Up Fifth Avenue For Saks’s annual holiday-window unveiling.
More Stories