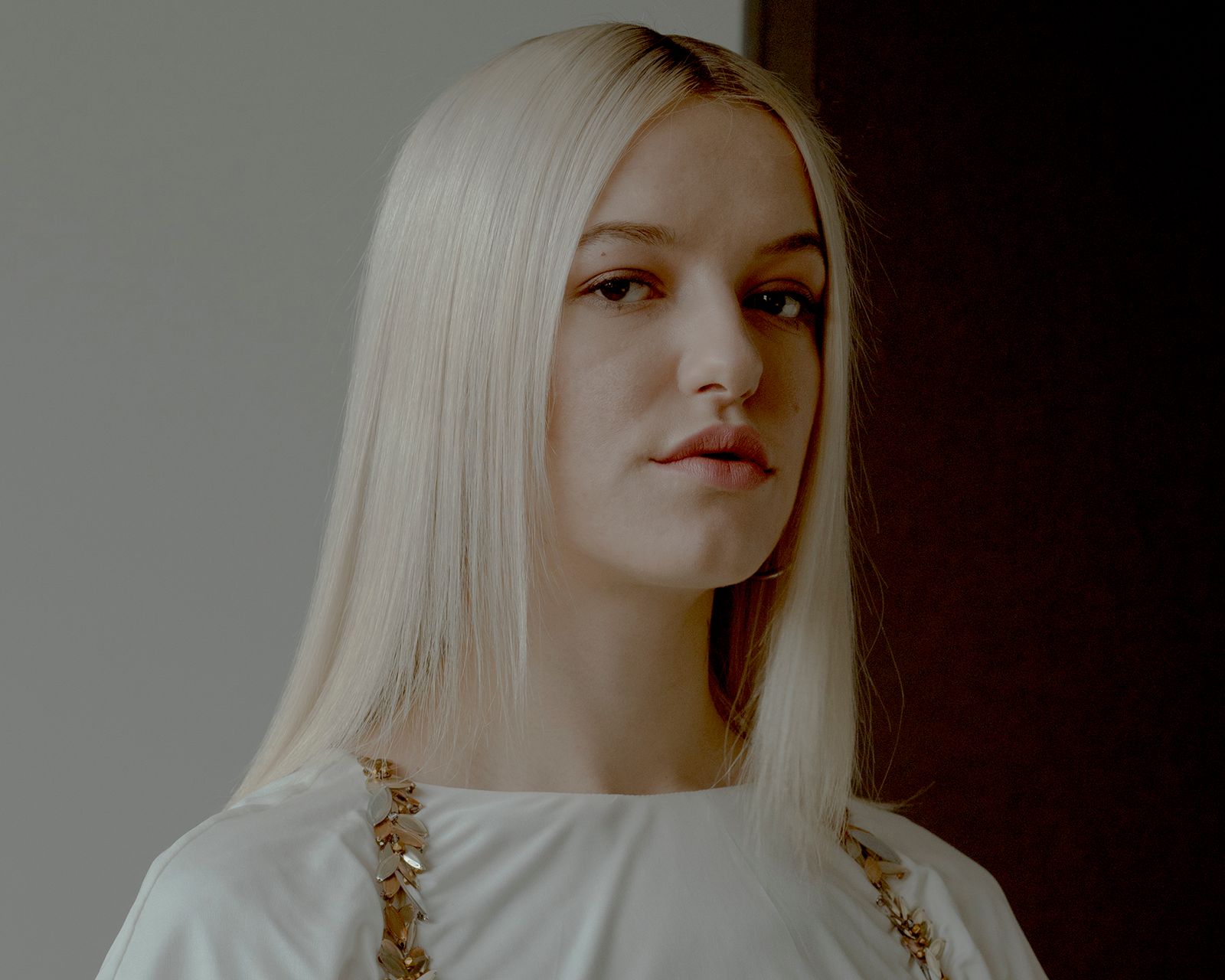 Like most people who’ve never bought a weed-themed bikini online, I first encountered Bria Vinaite in Sean Baker’s The Florida Project. Vinaite plays Halley, a single mother raising a six-year-old in a cheap motel outside of Orlando. Her raw, vulnerable performance has earned rave reviews, despite the fact that she’s a first-time actress — Baker found her on Instagram, where she was promoting her pot-inspired clothing line.

The second time I saw Bria Vinaite was immediately after the closing credits, when she and her co-star Mela Murder came out to address questions for assembled members of the press. As soon she started to speak, it became clear that the character she played wasn’t far from reality. Like Halley, Viniate is outspoken, stubborn, Brooklyn-accented, and covered in tattoos.

The third time I saw Vinaite was on her Instagram, @chronicflowers. Her feed is a menagerie of memes, videos of her dancing in front of the camera with a blunt, and press moments from The Florida Project. But there’s also a large Hockney-like sun-drenched plant that is featured in many of her Instagram stories, and I can tell there’s something special about it.

“Oh my god, the plant. I have a plant called Roger Franklin and he is really special. I’m not trying to sound weird, but he has a lot of personality and I talk to him every day.” Vinaite’s eyes light up when she talks about Roger. “It’s the first plant I’ve kept alive for longer than a week and I’m very proud of that. I try every day to make sure that he’s happy.”

Vinaite lives in Brooklyn and considers herself a homebody (she doesn’t like to go outside unless it’s warm.) “Every night I smoke a blunt. Or two. Or three.” How could this plant not be happy? “I lay in bed and try to read for at least half an hour. And then I go on Instagram for a little bit.” Yesterday she had the day off from work, so she drank smoothies and smoked with a friend.

This might all sound par for the course for a 24-year-old in Brooklyn, but she tells me that if 2017 was a chapter in her memoir, it would be called “The Year My Life Went Upside Down” — “not in a bad way, in a great way.”

In the same way that Florida isn’t a traditional movie (almost half the actors were six years old) and Sean Baker isn’t a traditional director (his last film, Tangerine, was shot on iPhones), Vinaite is not a traditional come-up actress. Her path didn’t include acting classes or famous relatives; she’s lived all over the States since moving to the U.S. from Lithuania as a kid; and she certainly doesn’t come across as media-trained. Within minutes of appearing at the Cut’s photo shoot, Vinaite hooked up her music and plugged in her vape charger. “Have you read his book?” she asked when a Gucci Mane song played. “It’s so good! You have to read it.”

“When I see a billboard that literally just has five names and they’re all A-listers, I’m just like, What is that bringing to the world that’s new?” screenwriter Sean Baker said in a Vulture interview earlier this year. Vinaite is new.

Florida changed everything for her. There are rumors she’ll be up for an Oscar. She can’t grab coffee in her neighborhood “looking like complete shit” without people asking for a photo. “It’s not like you ever want to say, Hey, I look like shit, sorry! but then I look at the pictures and think maybe I should have said no.”

It’s hard to imagine Vinaite looking “like shit,” though. Her hair is bleached, her eyes dark, her tattoos abundant. I sense the same dreamy Florida aura that follows her throughout the film. There’s a balance, a confidence and calm, and I don’t think it’s the weed. I ask her if she’s spiritual.

“I’m not a spiritual person, but I really believe in the power of the mind and I really believe in manifesting things,” she replies. Knew it. “Every single insane psychotic thing that I’ve ever believed that seems unfeasible to other people, I’ve made it happen.”

She explains how when she turned 16, she had an epiphany that something was going to happen to her at the age of 23. She turned 23 in June of 2016, and then Baker reached out. “We started shooting June 23rd of my 23rd year, like that night. When I realized it was a double 23, I cried for an hour. I felt like I had spoken this magical thing into existence.”

I ask her how she got into manifestation and the power of the mind, and she tells me books helped, but practice was key. “I need an insane amount of positivity to achieve the things I want. My friends have to deal with me going a little crazy, and I appreciate having people I can be honest with, who are there for the right reasons and genuinely care about me.”

You know who cares about Bria Vinaite? Sarah Paulson. The two connected at the Governor’s Awards. “I got her number. And there’s been a few instances where I’ve been going through stuff and she has been so helpful.” Vinaite pauses. It looks like she’s getting emotional. “Her advice means more to me than anybody else I could ask, because she’s really done it. I’m really grateful for her.”

“Grateful” is a word Vinaite uses a lot. “I think when you take some time out and really think about things, you appreciate more,” she says. “And a grateful heart attracts. It’s like a magnet! When people see that you’re genuinely grateful, more good things keep coming.”

Which raises the natural question: What will she do next? The character of Halley mirrored her perfectly — the tattoos, the blunt rolling, the rap music. The first time she read the script, she cried. “I’m really hoping to find something that I feel as connected with as I did with The Florida Project.” Her voice cracks. “I want to feel that passionate about things that I work on. I don’t want to just act to act.”

It’s also hard not to wonder how fame will change her. Will she become a more polished Hollywood product? Will she stop posting stories of late nights eating pizza, blowing smoke into her iPhone lens, and kissing all of her friends on the lips? I hope not.

For now, she’s trying to stay grounded. “Of course there are times where I fucking get upset and overwhelmed,” she says. That’s when she has to check herself and remember where she was two years ago, designing clothes and messing around on Instagram. “These are problems I want to have! I love my problems now.”

+Comments Leave a Comment
Bria Vinaite Can Speak Magical Things Into Existence
dating rumors 7:07 p.m.
Does Kacey Musgraves Have a Poet BF? It appears the singer may be dating another normie.
liveblog 6:58 p.m.
Adams Holds Wide Lead as NYC Waits for More Results: Updates The race isn’t over, and Maya Wiley still sees a path to victory.
pride 6:16 p.m.
The Beauty Brand That Turned Itself Into a Library to Support Queer Authors Aesop has dedicated three locations to books written by LGBTQIA+ authors.
lunchtime buy 5:32 p.m.
This Is My New Favorite One-and-Done Serum One product to rule them all.
brave 5:27 p.m.
Congrats to Jennifer Aniston on Overcoming Her Bread Phobia The actor says she is “in a really peaceful place” now that she no longer lives in fear of loaves.
wellness theories 4:40 p.m.
The Peloton Instructor Who Gives Her Eyes an Ice Bath Every Morning Meet Ally Love.
spooky! 4:09 p.m.
Who Will Paul Walker’s Ghost Send to Vin Diesel Next? Diesel said he thinks the late actor “sent” John Cena to play his brother in the newest Fast and the Furious movie.
a lot of you have been asking 4:08 p.m.
All Hail the Internet’s Most Popular Beauty Routine There’s one celebrity who’s more Googled than any other.
asian americans 3:45 p.m.
A Video Celebrating the Beauty and Resilience of Queer Asians  Talking to 16 people about their intersectional identities.
in memoriam 3:15 p.m.
Janet Malcolm Couldn’t Escape Being a Writer The late journalist famously despised her own profession, but she knew it was the best tool she had.
By Bridget Read
swellness 2:59 p.m.
Can PMS Give You Body Dysmorphia? How hormone swings affect your body image.
first look 11:00 a.m.
Gavin Turek Needed to Find Her Alter Ego An exclusive look at the soul singer’s debut full-length album.
ooh la la 10:41 a.m.
Rihanna and A$AP Rocky Are Finally Done Playing Coy Good for these two incredibly hot people.
are u coming? 8:30 a.m.
Bowen Yang Huffs Poppers On the Dance Floor “Do I go crazy tonight? Maybe not.”
extremely online 8:00 a.m.
Before We Make Out, Wanna Dismantle Capitalism? On dating apps today, it seems like everybody wants to eat the rich.
By Emilia Petrarca
post-pandemic life 8:00 a.m.
‘2020 Made Me Ask, What Do My Husband and I Have in Common?’ Four recently divorced people talk about how Covid impacted their marriages.
By Katie Heaney
relationships 7:00 a.m.
Celibate Intimacy Is a Commitment Worth Preserving People can build deep affection, vulnerability, and trust without the possibility of dating.
#freebritney Yesterday at 8:15 p.m.
Celebrities Share Messages of Support for Britney Spears Mariah, Halsey, and Liz Phair are all Team #FreeBritney.
free britney Yesterday at 7:51 p.m.
Britney’s Conservatorship Sounds Even Worse Than We Imagined “All I want is to own my money, for this to end,” she said in a court hearing. “And I would honestly like to sue my family.”
culture Yesterday at 5:07 p.m.
Only Olivia Rodrigo Could Make Me Want to Relive Prom The singer is hosting a livestream-concert prom party next Tuesday.
More Stories