As you may have learned from a passing UPS truck, 2017 was all about Taylor Swift owning her Reputation. And if you think a full-length album chronicling her every gripe, feud, and bad breakup was going to be the end of it, you clearly don’t know Taylor Swift.

According to Harper’s Bazaar, the singer doubled down on her newly minted self-aware-bad-girl brand this holiday season by sending out custom holiday cards with snakes on them, along with text that read “Happy Holidaysssss” and “May your reputation shine bright this holiday season!” 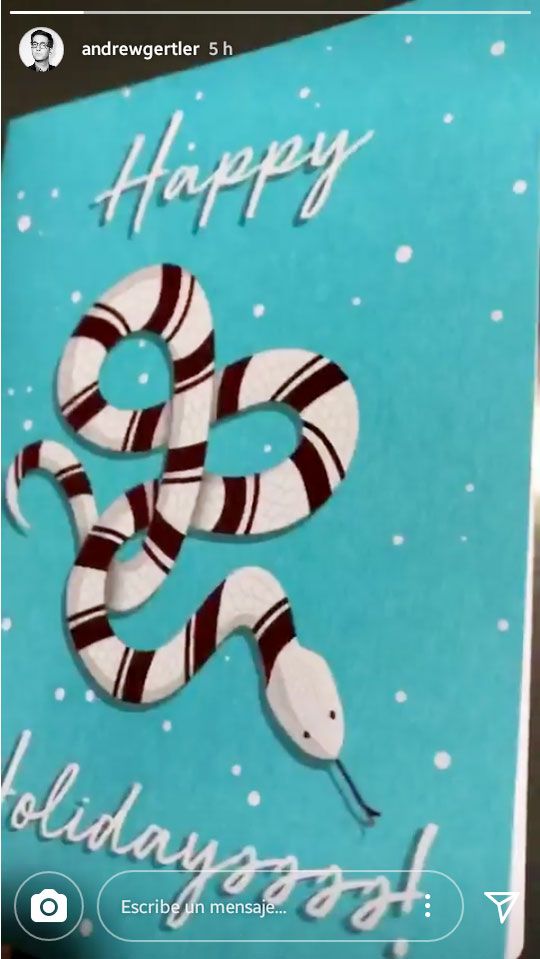 For those who have somehow managed to avoid the inescapable churn of the Swift PR machine, a brief primer: Taylor Swift’s association with snakes goes back a while, beginning when she was branded a snake by Kimye fans in the great “Famous” incident of 2016 (one of the many hits to her reputation that year). Later that year, Swift fans reclaimed the snake emoji in support of the singer, and more recently, Swift teased her album Reputation with a snake-themed video and wore a glittery snake-covered sweater onstage at the Jingle Ball. And now, custom holiday cards!

A little on the nose, but you’ve gotta respect her commitment to the bit.

See all of Taylor Swift's looks

how i get it done 7:00 a.m.
Sounds Like Working at LEGO HQ Is As Fun As You’d Imagine “We have LEGO bricks in every conference room. It’s encouraged in meetings that we make playful games.”
By Olivia Luppino
astrology Yesterday at 8:30 p.m.
Madame Clairevoyant: Horoscopes for the Week of August 8 On Thursday night, a full moon in Aquarius ignites your rebelliousness.
By Claire Comstock-Gay
sex diaries Yesterday at 8:00 p.m.
The Grad Student Who Meets Someone on Facebook Marketplace This week’s sex diary.
ugh why Yesterday at 6:19 p.m.
Kevin Federline Has Some Issues With Britney Spears’s Instagram Spears responded, calling his statements “hurtful.”
celebrity Yesterday at 3:33 p.m.
Kardashian News Drop: A Baby and a Breakup Khloé Kardashian welcomes another baby as Kim Kardashian and Pete Davidson reportedly break up.
celebrity Yesterday at 12:41 p.m.
Kim Kardashian Reportedly Resigned As Queen of Staten Island Her nine-month relationship with Pete Davidson is allegedly done.
backlash Aug. 5, 2022
What Is Going On With Jackie Aina? Her latest Forvr Mood collection was supposed to be an ode to Nigerian culture. Some fans aren’t sold.
celebrity beauty encyclopedia Aug. 5, 2022
An Encyclopedia of Celebrity Beauty Brands Here are over 60 products that famous people have made for your face.
By Daise Bedolla, Kathleen Hou, and Erica Smith
friday sales Aug. 5, 2022
20 Things on Sale You’ll Definitely Want to Buy: From Everlane to Patagonia Including two deals exclusively for Strategist readers.
parties! Aug. 5, 2022
Karen Pittman, Naomi Watts, and More of the Bestest Party Pics From the Week All of our favorite looks to kick off August.
hairy situations Aug. 5, 2022
Doja Cat Doesn’t Think Hair Is ‘Cool’ So she shaved it all off — in front of her followers.
much to think about Aug. 5, 2022
Big Sean Vexed by Big Questions Science has confirmed what the rapper has long sensed is true: Earth’s rotation is speeding up.
fashion Aug. 5, 2022
Want Design Porn? Go to Shelter Island, Ask for Louis Vuitton. A pop-up showcasing the brand’s finest classic bags, furniture, and décor is summering on the island.
always shopping Aug. 5, 2022
21 Leggings for Any Type of Workout Because leggings can make or break a workout.
By Bianca Nieves and Anne Cruz
extremely online Aug. 5, 2022
I Can’t Shut Up About This Pickle An artist flung a pickle from a McDonald’s cheeseburger onto an art-gallery ceiling and was selling it for $6,275.
family Aug. 5, 2022
My Mom Has No Friends The loneliness of growing older made bearable with playdates.
health Aug. 5, 2022
What We Know About Monkeypox So Far The Biden administration has declared the outbreak a public-health emergency.
beauty Aug. 5, 2022
The Future Smells Like Chanel No. 5 The French house has spent decades planning for it.
power Aug. 5, 2022
All of the Allegations Against Kevin Spacey A judge ruled that Spacey, who allegedly sexually harassed House of Cards crew members, must pay almost $31 million to the show’s production company.
lies Aug. 5, 2022
Alex Jones Owes Over $4 Million for His Sandy Hook Lies And possibly more: A jury will now consider punitive damages for two parents whose son died in the massacre.
More Stories