On Tuesday, Justin Timberlake released a teaser for his upcoming album Man of the Woods, and much like the actual woods, the teaser is beautiful and enchanting, but also confusing, disorienting, and entirely unpredictable.

Titled, appropriately “Justin Timberlake - INTRODUCING MAN OF THE WOODS” the video features lots of close-up shots of frost and mournful-looking shrubs and aerial views of horses running and even though there’s a lot of snow, sometimes it’s sunny and Timberlake wears a tight-fitting tank top, so you never know what season it is. There are also a lot of scenes of the singer flailing around in clearings, and generally looking like a cowboy who’s questioning his purpose in life.

In a voice-over, the singer says, “This album is really inspired by my son, my wife, my family, but more so than any other album I’ve written, where I’m from,” by which I assume he means the small community of Shelby Forest, Tennessee, and not the N*Sync tour bus.

Man of the Woods drops on February 2, two days before Timberlake is set to perform at the Super Bowl halftime show. While you wait, here are some of the best moments from the trailer. 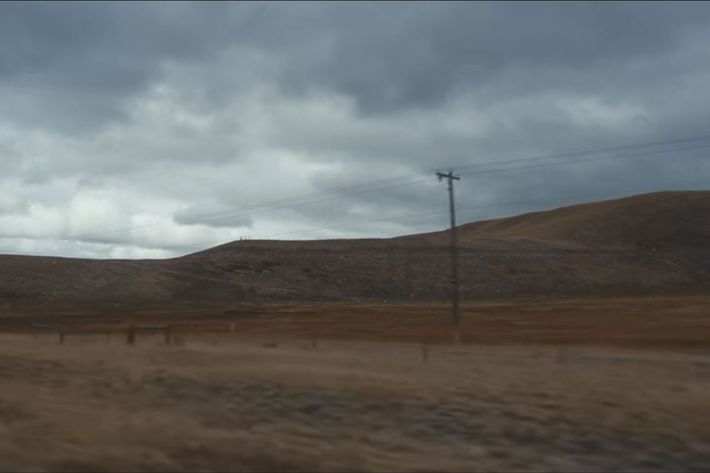 The video opens with some bleak, rolling hills that make you say “Whoa, I bet this will album be pretty deep and feature at least three fiddles.” 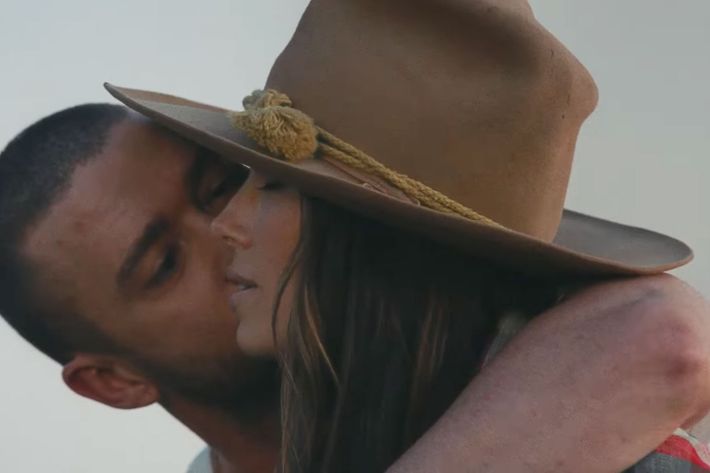 Jessica Biel makes an appearance, which is nice, because she’s his wife and also because I keep forgetting they’re together. But they look happy here — I’m glad. 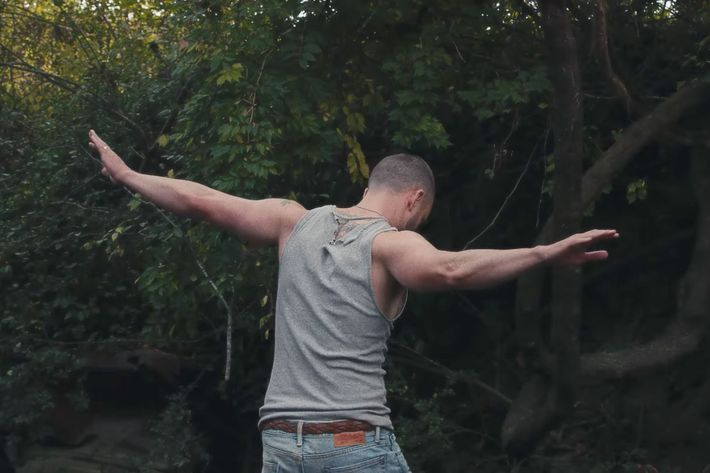 One of the things this video taught me about being a woodsperson is that things like “seasons” and “sleeves” are meaningless when you’re one with nature. 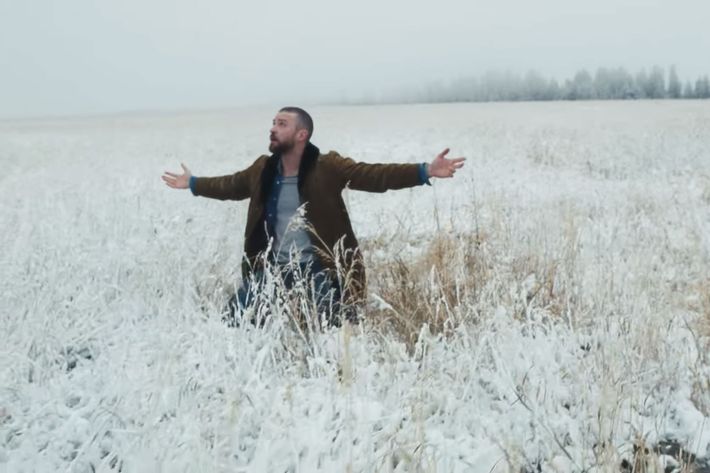 At one point, Timberlake collapses onto his knees in the middle of a snowy field, his arms outstretched as if to say “Where am I?” but in an existential way, not a physical way. 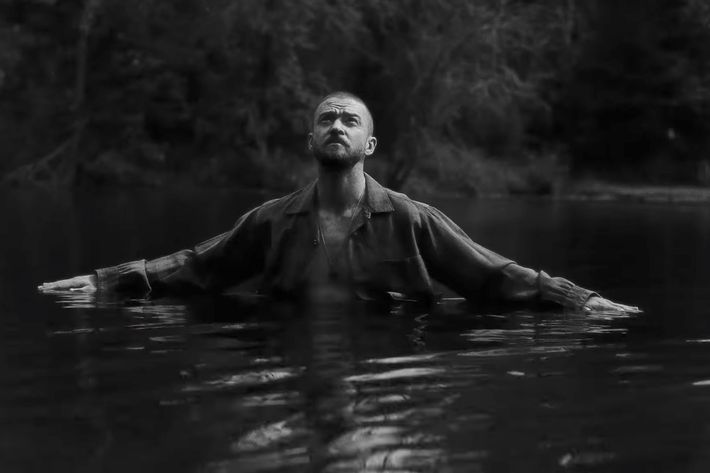 Then he gets all biblical and gazes thoughtfully toward the heavens while someone sings “Saint or a sinner?” Also he looks a bit like Sam Smith here. 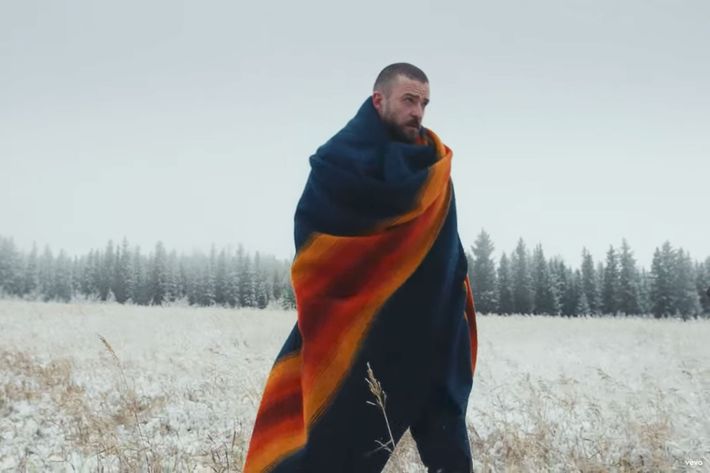 Here’s the Man of the Woods bundled up in a big blanket because even outdoorsmen love feeling cozy and, as previously established, he might be wearing a tank top. 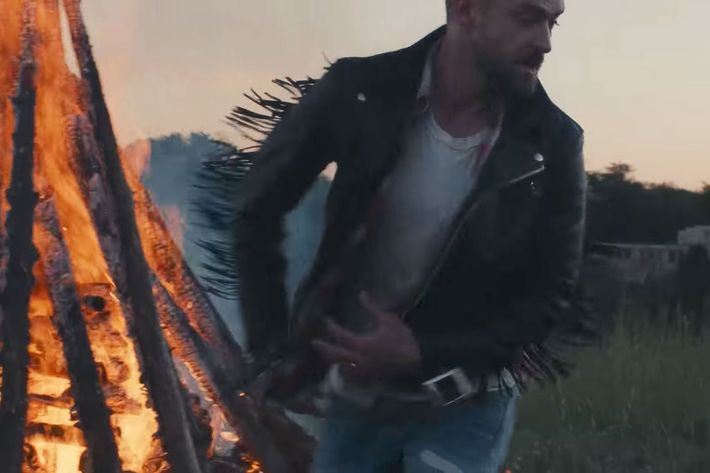 At one point, a woman who I will assume is Jessica Biel says: “This is like mountains, trees, campfires. Like, wild west, like, now!” and then Timberlake twirls away from a large bonfire in this tasseled jacked and I screamed, passed out, woke up screaming again, and then immediately re-watched it 17 times. 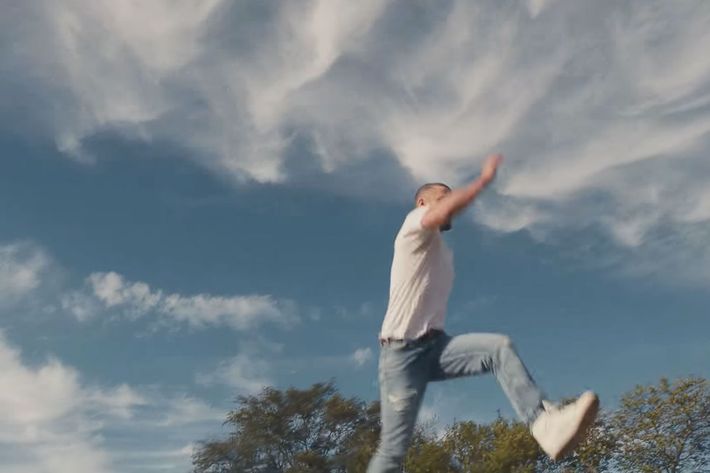 Then Timberlake does a goofy leap through the air and I couldn’t scream again because I was still screaming about the tassel twirl, but oh, my God! 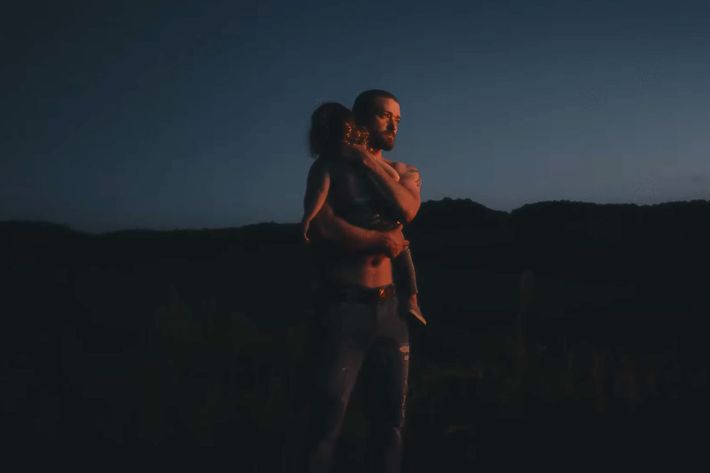 Here he is, shirtless, holding a child who is probably his son, staring into distance and wondering where his tank top went.

“I feel so Earthy,” we then hear Timberlake telling producer Pharrell, in case we missed what the theme of the album was (it’s WOODS).

“It’s just where you are in your life, right now.”

breakout 8:00 a.m.
Meet Sally Rooney’s New Leading Lady Alison Oliver auditioned over Zoom. Next thing she knew, she was on set with Joe Alwyn.
celebrity 7:19 a.m.
How Many Weddings Are Kourtney and Travis Going to Have? Kravis got legally married over the weekend.
power Yesterday at 6:02 p.m.
The Normalization of White Male Violence What happened in Buffalo on Saturday is our nation’s natural state. Black anxiety is mine.
By Brittney Cooper

lawsuits Yesterday at 5:38 p.m.
Amber Heard Says She Thought Johnny Depp Would Kill Her Heard also testified that Depp sexually assaulted her with a liquor bottle during a brutal fight.
white supremacy Yesterday at 4:55 p.m.
What Is Replacement Theory? The 18-year-old gunman who opened fire on a Buffalo supermarket was apparently motivated by an old white-supremacist conspiracy.
do i need this Yesterday at 4:04 p.m.
Do You Need the ‘Windex of Skin Care’? The spray has taken up permanent residence in my overflowing beauty closet.
let's talk about breasts Yesterday at 3:35 p.m.
Suddenly I Need Gold Nipple Pasties Thanks to Doja Cat, of course.
fomo Yesterday at 3:29 p.m.
I’m Devastated I Wasn’t Invited to Chloë Sevigny’s Wedding Swan-shaped ice sculptures, mint-julep cups full of cigarettes, and Natasha Lyonne.
celebrity Yesterday at 1:43 p.m.
Kim Is Really Trying to Make Beach Gloves a Thing Kim Kardashian is on the 2022 Sports Illustrated “Swimsuit” issue wearing a nude bikini … and matching opera gloves?
parenting Yesterday at 1:10 p.m.
Formula Is a Lifeline The conversation around the shortage reveals how misunderstood formula feeding remains.
By Erica Schwiegershausen
celebrity Yesterday at 12:49 p.m.
I Really Don’t Need Any More Info About Megan Fox and MGK’s Sex Life This week, they apparently cut a hole in her jumpsuit to have sex.
brooding Yesterday at 12:00 p.m.
What Will It Take for Momfluencers to Speak Up About Abortion Rights? Mommy bloggers have the power to mobilize real political energy — but they rarely do.
celebrity Yesterday at 10:18 a.m.
Someone Sneaked a Phone Into Jesse Williams’s Broadway Debut Nudes from the show — leaked without the actor’s consent — are circulating on Twitter.
book excerpt Yesterday at 10:00 a.m.
How to Call the Whole Thing Off The day after breaking my fiancé’s heart, we attended his best friend’s wedding together. It didn’t go well.
By Alyssa Shelasky
encounter Yesterday at 8:00 a.m.
Would You Time Travel Back to Your Sweet 16? In Emma Straub’s latest, the novelist uses fantasy to revisit the past. It all happened in real life, too.
By Kate Dwyer
how i get it done Yesterday at 7:00 a.m.
How Frieze L.A. and New York Director Christine Messineo Gets It Done She’s the first person to oversee both art fairs and is currently gearing up for New York’s tenth edition.
By Liam Freeman
astrology May 15, 2022
Madame Clairevoyant: Horoscopes for the Week of May 16 It’s Gemini season, but don’t let that scare you. Give the twins a chance.
By Claire Comstock-Gay
sex diaries May 15, 2022
The Woman Wondering If She’s Bisexual Enough to Come Out This week’s sex diary.
culture May 13, 2022
At the New Museum, Faith Ringgold and Women in the Workforce Rebecca Traister, Kimberly Drew, Paola Ramos, and Isolde Brielmaier kicked off a new speaker series from the Cut and the New Museum.
fashion May 13, 2022
Grimes DJs the Apocalypse at Louis Vuitton A billowing metallic dress with a high neckline was a natural starting point for the silhouettes that followed: boxy, oversize, and sculptural.
More Stories