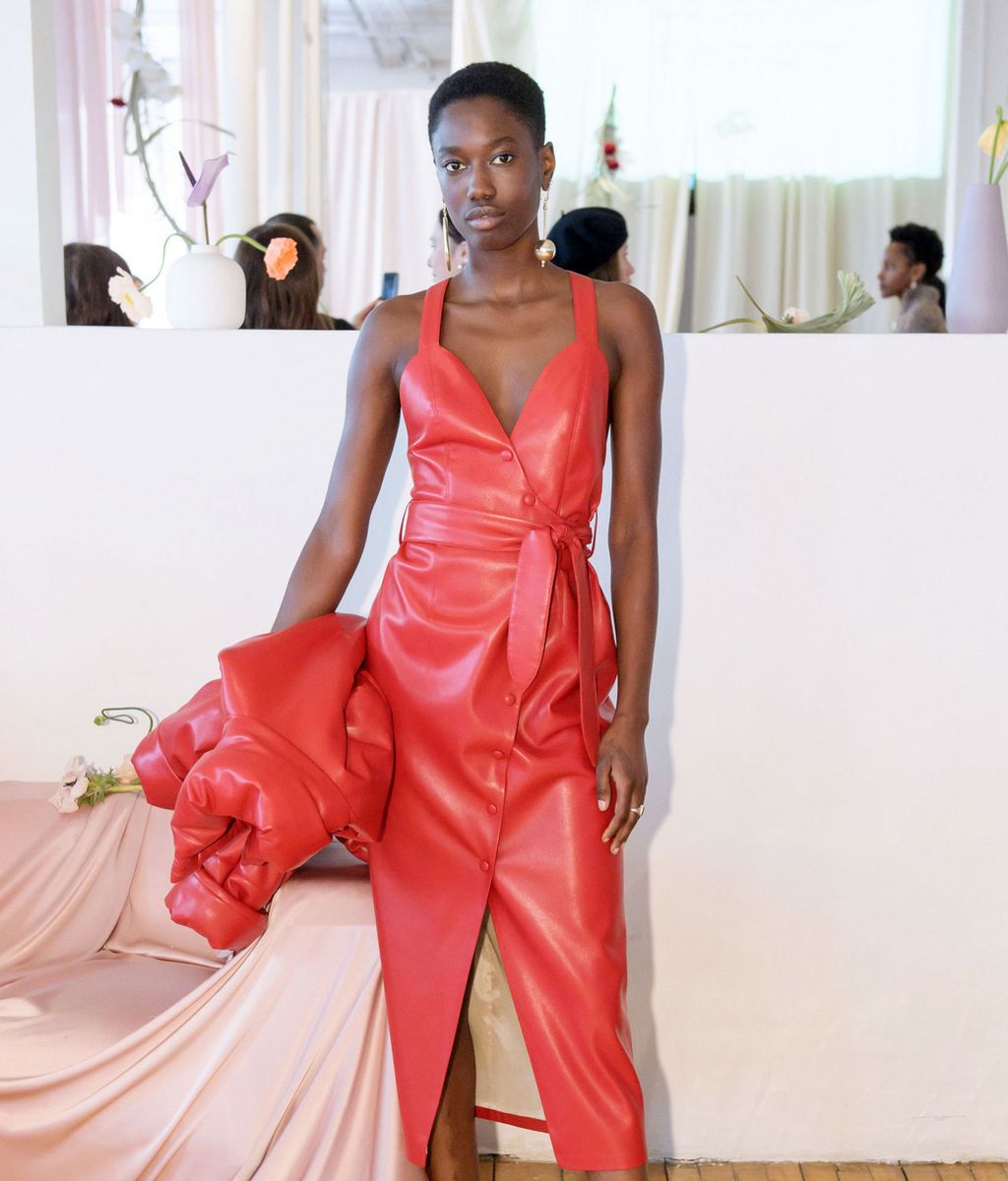 If you watch it play out on social media, New York Fashion Week can seem to be dominated by a few big names, but every season, there are smaller brands — companies with limited budgets and a no-nonsense approach — that capture what women actually want to wear. In the fog of what’s trending and what’s being shared, it’s refreshing to see independent brands creating clothing that’s both beautiful and approachable. Below are seven such shows that we can’t stop thinking about.

For Nanushka’s NYFW debut, designer Sandra Sándor continued on her quest to create functional, beautiful clothing. Based in Budapest, Sándor works with lustrous textures like satin, Turkish tapestry, and jacquard, all symbolizing her connection with the Middle East. Standouts from the collection were the vegan leather pieces, spurts of polka dots, and hefty shearling aviator jackets.

Yesterday opening the @r13denim show. So fire!!!! Thank you so much @camillanickerson @aarondemey1 and @bitton

R13 is slowly but surely making a name for itself as the go-to brand for cool, modern grunge. This season, industry favorite Adwoa Aboah opened the show in a bodysuit and leggings screen-printed with a landscape scene. Designer Chris Leba’s inspiration: the ongoing fight to protect America’s public lands. Witnessing floral dresses, chunky boots, and oversize bombers presented with Leba’s element of defiance was purely a joy.

This was Sandy Liang’s 11th season, and it’s clear that she’s found her stride dressing Lower East Side tomboys. The Parsons graduate developed her cult following by making leather, shearling, and faux-fur jackets, but her range has grown each season. This collection offered eccentric new ideas, with riffs on florals, pastel outerwear, and layering. The show, held at Mission Chinese with Liang’s own family and friends modeling, felt as playful as it did timely.

Moon Choi’s clean, gender-neutral suiting is what continues to bring me back. The Seoul-born, New York–based designer specializes in sophisticated, elegantly tailored clothing. Every piece has an air of confidence to it. And with the heavy emphasis on broad shoulders and the sensual muted palette, Choi continues to blur the boundaries between masculine and feminine.

Designer Hillary Taymour of Collina Strada staged her show as a wedding ceremony in which actress and photographer Sasha Frolova married … herself. In the show notes, the designer explained, “You cannot start to love another until you love yourself, so why not marry your higher self?” The collection, a tribute to self-love, was full of genderless clothing made from vintage materials like crushed velvet and sheer organza, shown on models ages 5 months to 68 years.

It’s only been three years since Claudia Li left positions at JW Anderson and Brandon Maxwell to start her own collection. Normally a lover of minimal, architectural silhouettes, this season she created pieces for a lot of different kinds of women. Gems included the luminous fabric dresses and the neon suiting. Li is still finding her way, but she’s the kind of emerging talent who will flourish over New York Fashion Weeks to come.

Ukrainian designer Svetlana Bevza presented an entire collection made from cruelty-free fabrics. Titled “Faux Reality,” the show captured a sense of lavish elegance inspired by The Royal Tenenbaums in a contemporary manner, with carefully thought-out outerwear made with down alternatives and printed nylon. The wool and eco-leather coats, satin belt bags, and silk dresses gave hope for a new definition of elegance.

+Comments Leave a Comment
7 New York Fashion Brands That Deserve Your Attention
succession 7:54 p.m.
Let This Brian Cox Quote Be Your Guide The Succession star is “too old, too tired, and too talented,” and, honestly, same.
tv 6:23 p.m.
Here’s Sebastian Stan on Filming With an Animatronic Penis The actor had a one-of-a-kind experience filming Pam & Tommy.
valentine's day 3:11 p.m.
58 Gifts for the Person You Love They deserve the world, but these picks will work too.
celebrity 1:59 p.m.
Finally, Something Bono and I Can Agree On He is apparently embarrassed by “most” of U2’s music.
news 1:56 p.m.
Cardi B Offers to Pay Funeral Costs for Bronx Fire Victims Last week’s apartment fire left 17 people dead and over 60 injured.
self 1:15 p.m.
I’m Tired of Explaining Why I Don’t Drink We have to expand our language beyond “sober.”
By Sarah Wood
remembrances 12:39 p.m.
The Fashion World Remembers André Leon Talley Designers, writers, and celebrities paid tribute to the inimitable fashion icon, who died on Tuesday at 73.
vampires 12:08 p.m.
Megan Fox’s Engagement Ring … Bites? “The bands are actually thorns. So if she tries to take it off, it hurts.”
celebrity 11:03 a.m.
Tracing the Ongoing Feud Between Britney and Jamie Lynn Spears Things spiraled out after Jamie Lynn went on Good Morning America to promote her new book.
style 9:35 a.m.
Anna Wintour Remembers André Leon Talley The Vogue editor mourned her friend and former colleague, calling him “a brilliant and compassionate man.”
in memoriam 8:33 a.m.
André Leon Talley Has Died The former Vogue creative director and editor passed away unexpectedly this week at the age of 73.
culture Yesterday at 8:10 p.m.
There Really Is a Coordinated Online Attack on Meghan Markle A new analysis found that the Duke and Duchess of Sussex were the targets of a strategic, monetized social media campaign against them.
euphoria Yesterday at 6:31 p.m.
8 Pieces You Can Shop From Episode 2 of Euphoria By Kim Shui, Réalisation Par, Nodaleto, and more.
fashion Yesterday at 6:24 p.m.
All Signs Point to a Big Year Ahead for Aimé Leon Dore The cult menswear brand has a New Balance collection in the works and LVMH money in its pocket.
engagements Yesterday at 6:13 p.m.
What Is Machine Gun Kelly Hiding? The story of his proposal to Megan Fox isn’t adding up.
the grammys Yesterday at 4:56 p.m.
The Grammys Are Back On The awards show has been pushed to April — and will now take place in Las Vegas.
health Yesterday at 4:45 p.m.
Everything to Know About Rapid At-Home COVID-19 Tests Americans are finally eligible to receive free rapid tests.
power Yesterday at 2:09 p.m.
The New York Post Gets Its Own Tabloid Scandal A former top editor sues, saying the paper’s notorious former boss was welcomed back after sexually harassing her.
By Shawn McCreesh and Angelina Chapin
movies Yesterday at 2:00 p.m.
Daniel Radcliffe, We Are Ready for Your Music Career The actor will be portraying Weird Al in an upcoming biopic.
the bigger picture Yesterday at 1:34 p.m.
Wrestling Has a Dark Side. But for Some, It’s a Safe Space. Photographer Sofie Vasquez spent a year traveling the country, documenting the indie-wrestling scene.
By Bindu Bansinath
More Stories