“As he joined the discussion about family life, Casablancas talked about his seventeen-year-old daughter, Cecile. He said Cecile had been solicited by a photographer last summer on a beach in Ibiza. The photographer asked her to pose on a rock in her bikini … ‘She’s got a great little body,’ he told his models.”

The speaker was John Casablancas, founder of Elite Model Management, and the quote comes from Dinah Prince’s profile of him, a cover story that ran in New York almost exactly 30 years ago. It makes for timely reading, side-by-side with “Can Fashion Ever Be an Ethical Business?” in this week’s issue, about the abuses models face in the fashion industry. Casablancas spoke and behaved in ways that were already — and certainly are now, by the standards of our #MeToo moment — far, far past the point of appropriateness. “My rule of life is that I want to have a good time,” he told Prince. And also: “One afternoon, Casablancas calls Jeanna Cie, a seventeen-year-old model and pop singer, into his office to discuss her weight. He uses a strategy that he later suggests is sure-fire. ‘I explained to her how turned off I was by her,’ he says.” He holds a wet-T-shirt contest on the dance floor at Xenon. “I prefer a model that parties a little too much to a model that doesn’t party enough,” he says. An observer calls him “one of the creepiest people I have ever met.” 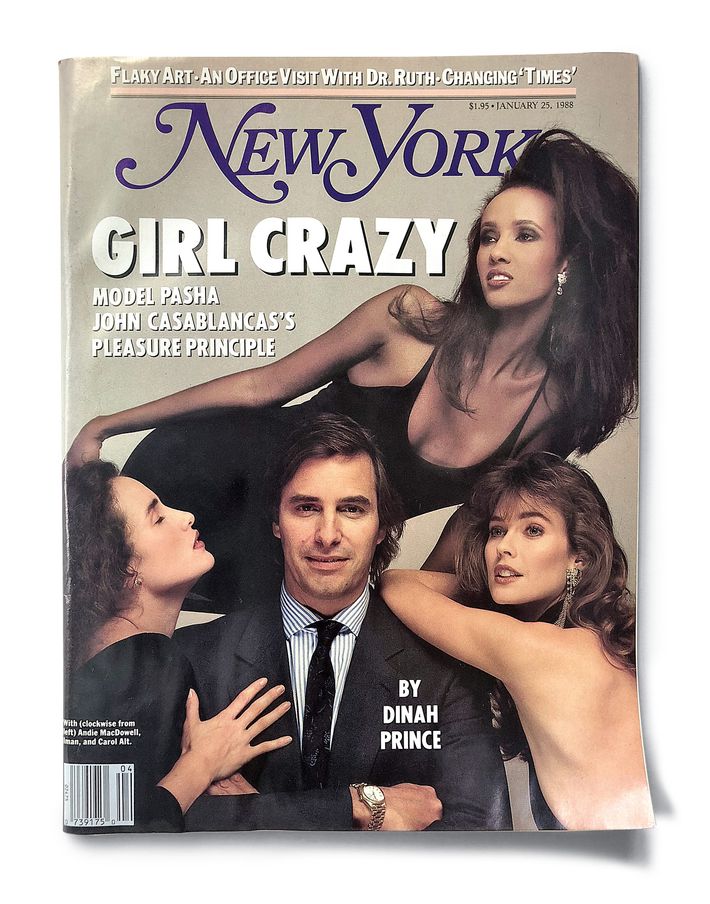 The centerpiece of the story is his involvement with Stephanie Seymour, whom he’d discovered via a contest at a shopping center in San Diego. He’d actually noticed her mother first — “absolutely ravishing,” he says — and then homed in on her daughter, who was 15 years old at the time. (He was 41.) Over the next year, he brought Seymour to Acapulco for the final round of that contest, then to New York. By the time of Prince’s story, he had begun and ended a two-year extramarital affair with her. And his description of looking at Seymour is downright chilling. “She is a girl of extremes,” he told Prince. “And the way she developed — there’s a quality that developed about her that is this incredible sensuality that a woman-child has, a true woman-child … her voice is a child’s, her attitudes, the way she holds her feet and her hands are those of a child, at the same time with an incredible sensuality to it. And that mixture was and is so explosive … This was something like a forbidden fruit for both of us.”

Talking this way, let alone behaving this way, in 2018 would almost surely get his agency closed down, if only because Seymour seems to have been underage for the entire run of their involvement. “He was wide open — he was a very confident guy,” Prince remembers. “There was definitely stuff that made me really uncomfortable.” Didn’t he have handlers around him, or public-relations people who tried to cut him off when he talked like this? “No,” Prince says. “I was hugely pregnant — I don’t remember which month I was in — and I wonder if I seemed nonthreatening. But he opened his world to me; he made models accessible to me. I’m sure he crossed lines right and left.” Seymour described their relationship quite warmly in the story, and stayed with the agency thereafter; in 2017, she still spoke well of him, telling the Post, “He was my first love, my first boyfriend, my first everything.” Casablancas remained at Elite until 2000, leaving after a BBC exposé about drug use and exploitative behavior at modeling agencies tarnished the company’s reputation. He moved from New York to Rio that year, by which time he’d married his third wife, a 17-year-old.

Did Casablancas, who died in 2013, react badly to his portrayal in New York? “He demanded an apology,” Prince says, recalling that he was upset at a reference to his “ogling” a model’s breasts. “Ed [Kosner, then New York’s editor-in-chief] and I did craft a response. But it was a funny thing for him to fixate on, given the whole story,” she says. “It [his behavior] still wasn’t acceptable, but yeah, as far as he was concerned, this was the life.”

*This article appears in the February 5, 2018, issue of New York Magazine.

Can Fashion Ever Be an Ethical Business?

+Comments Leave a Comment
A Hard Look at the Original Modelizer

spring fashion 6 mins ago
Ella Emhoff’s Other Plus One Her always-present Secret Service detail.
style 25 mins ago
At Marc Jacobs, a Generous, Life-Enhancing Fashion History Lesson The designer’s latest show, “Heroes,” celebrated the the late Vivienne Westwood.
in memoriam 2:33 p.m.
Paco Rabanne Has Died The revolutionary fashion designer was 88.
spring fashion 2:00 p.m.
11 Spring Bags, From $7 to $7,900 This season’s most compelling bags, from Forever 21 to Hermès.
best in class 1:50 p.m.
16 of the Very Best Water Bottles Always be hydrating.
By Emma Wartzman
valentine's day 1:20 p.m.
The 21 Best Last-Minute Valentine’s Day Gifts Where and when to get them.
friday sales 1:06 p.m.
20 Things on Sale You’ll Actually Want to Buy: From Klorane to Patagonia Including a heart-shaped mini waffle maker, our favorite cream-blush stick, and a moisturizer packed with snail mucin.
valentine's day 12:14 p.m.
19 Nontraditional Valentine’s Day Gifts Give something unexpected this February 14.
spring fashion 12:00 p.m.
Mei Kawajiri’s Very Extreme Nails  Her completely over-the-top talons landed her features in magazines and gigs backstage for Marc Jacobs, Tom Ford, Miu Miu, and Moschino.
By Maya Allen
fashion 11:59 a.m.
Do Not Show Up Late to the Marc Jacobs Show Lourdes Leon was apparently denied entry for arriving after the doors closed.
keeping up with the royals 10:53 a.m.
Will Harry and Meghan Get to Go to the Coronation? Sources suspect they’ll be invited; whether or not they accept is another question.
q & a 10:00 a.m.
Rachel Bilson Has Some Notes for The Bachelor The Accused actress and podcast host also talked about reuniting with her O.C. co-star Mischa Barton.
a choice? 10:00 a.m.
What Is Going On With Austin Butler’s Voice? I fear he may be stuck talking like Elvis forever.
extremely online 9:40 a.m.
I Can’t Shut Up About About Nancy Pelosi’s Hot-Dog Diet The former House Speaker also endorses ice cream for breakfast.
spring fashion 8:00 a.m.
The Woman Who Became McQueen The quiet ascendance of Sarah Burton.
By Cathy Horyn
culture 8:00 a.m.
This Is Pamela, Finally The model-actress’s memoir and documentary reveal only what she wants us to know. It’s about time.
By Roxane Gay
the wedding files 7:00 a.m.
At Georgia O’Keeffe’s Ghost Ranch, an ‘Epic’ Wedding No speeches, just dancing.
By Kaitlin Menza
¡hola papi! 6:00 a.m.
‘I Feel Abandoned by My Friend’ Hopefully the two of you can have a productive conversation that leaves you both in a healthier place.
By J.P. Brammer
power Yesterday at 9:16 p.m.
Dave Portnoy Has Dropped His Lawsuit Against Insider The Barstool Sports founder filed suit last year in response to allegations he filmed women without consent during sex.
culture Yesterday at 8:14 p.m.
Ellen DeGeneres Still Has a Lot of Famous Friends DeGeneres and Portia de Rossi’s vow renewal was officiated by Kris Jenner and attended by Prince Harry and Meghan Markle.
More Stories