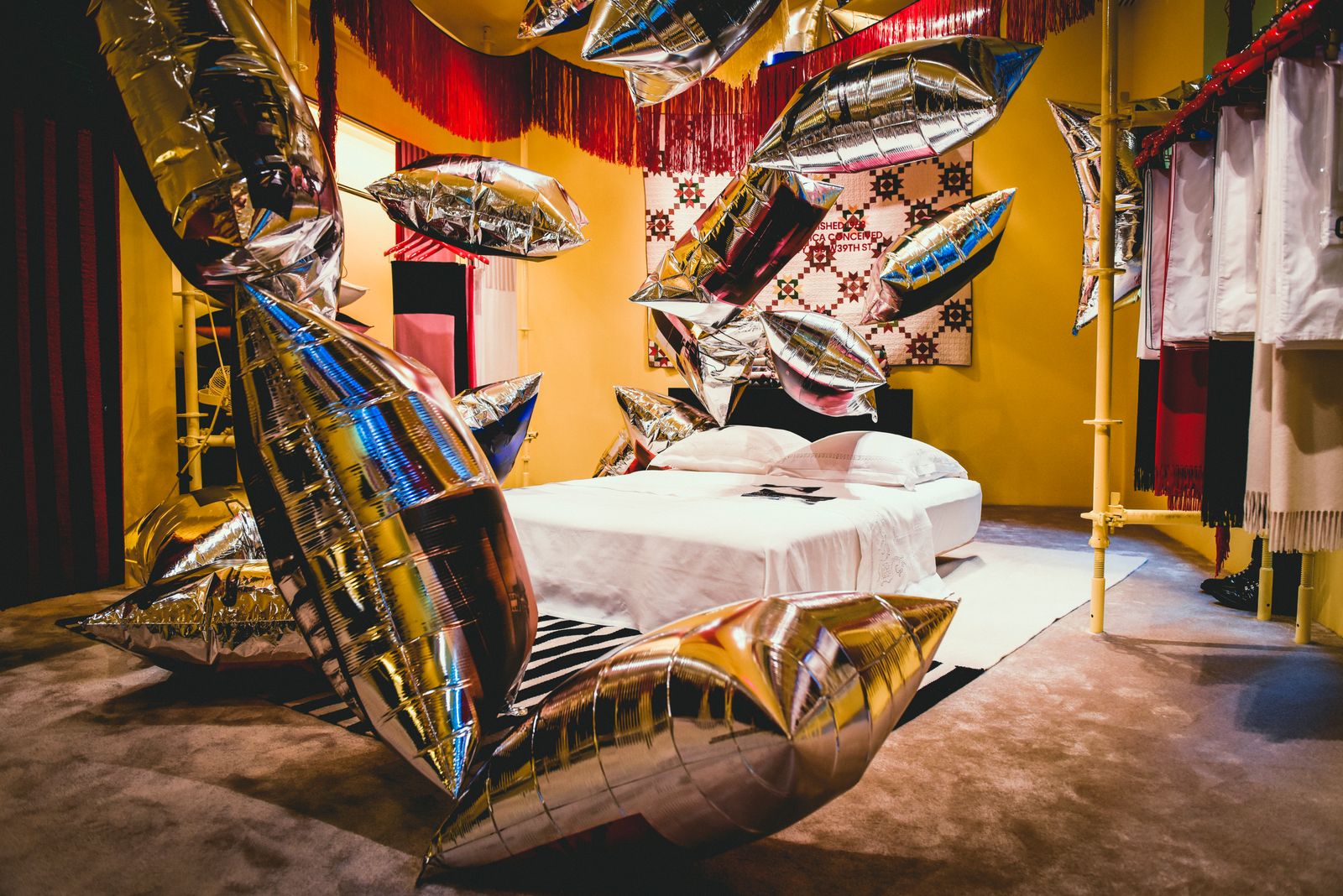 Even if you weren’t planning on stopping by Calvin Klein’s flagship store this week, do it to play with the balloons. The freshly redesigned store — complete with its bright yellow scaffolding and broken-down (on purpose) mannequins — is always eye-catching. But until February 28, it’ll have a little something extra. The label created silver mylar balloons with some of Warhol’s most iconic paintings printed on them to reimagine his “Silver Clouds” installation. It’s part of an ongoing partnership between Calvin Klein and the Andy Warhol Foundation.

Warhol’s “Silver Clouds” was his farewell to painting in 1966. He said when it was unveiled that the only way to say good-bye to the medium was to create a painting that floats. The original piece consisted of 15 pillow-like balloons bouncing around his Factory. The Calvin Klein flagship multiplied that number several times to create their effect for the installation, titled “Paintings That Float: Warhol’s ‘Silver Clouds,’ Revisited.” The Warhol images were also used in the latest Calvin Klein 205W9NYC’s runway collection as prints for dresses, scarves, and tank tops. 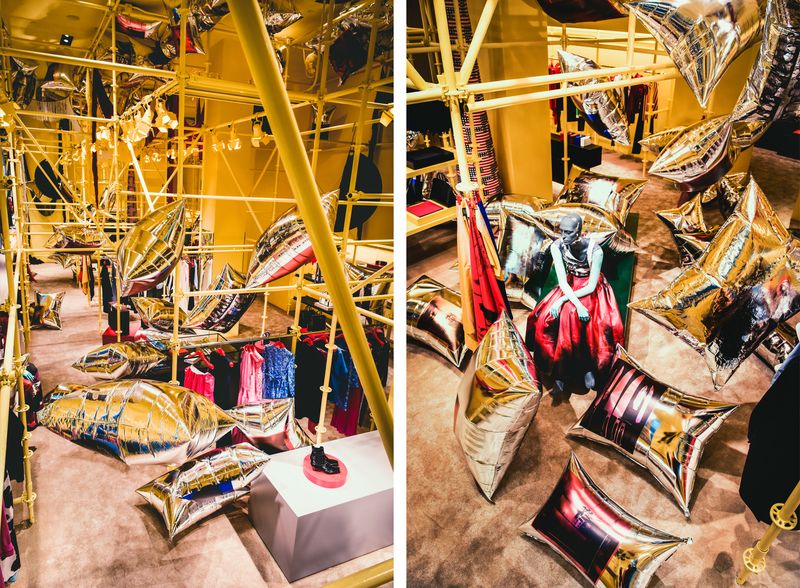 Throughout the day, the balloons tend to migrate to the top of the third floor, and in the morning some are refreshed with an injection of helium to restore them to their bouncy glory. When someone opens the double doors to the store, the gust of wind blows the balloons into a frenzy, inviting the customer into a fantastical world. Like a grown-up ball pit, they’re meant to be played with, despite their macabre images.

At the very least, it’s pretty visually striking to see Dennis Hopper’s face go bouncing by on a balloon next to some blinged-out cowboy boots. If Raf Simons’s latest collection for the label showcases a new Americana, the silver balloon clouds at the flagship are artistic tumbleweeds.

+Comments Leave a Comment
Calvin Klein Just Re-created an Iconic Andy Warhol Moment
astrology Yesterday at 8:30 p.m.
Madame Clairevoyant: Horoscopes for the Week of August 8 On Thursday night, a full moon in Aquarius ignites your rebelliousness.
By Claire Comstock-Gay
sex diaries Yesterday at 8:00 p.m.
The Grad Student Who Meets Someone on Facebook Marketplace This week’s sex diary.
ugh why Yesterday at 6:19 p.m.
Kevin Federline Has Some Issues With Britney Spears’s Instagram Spears responded, calling his statements “hurtful.”
celebrity Yesterday at 3:33 p.m.
Kardashian News Drop: A Baby and a Breakup Khloé Kardashian welcomes another baby as Kim Kardashian and Pete Davidson reportedly break up.
celebrity Yesterday at 12:41 p.m.
Kim Kardashian Reportedly Resigned As Queen of Staten Island Her nine-month relationship with Pete Davidson is allegedly done.
backlash Aug. 5, 2022
What Is Going On With Jackie Aina? Her latest Forvr Mood collection was supposed to be an ode to Nigerian culture. Some fans aren’t sold.
celebrity beauty encyclopedia Aug. 5, 2022
An Encyclopedia of Celebrity Beauty Brands Here are over 60 products that famous people have made for your face.
By Daise Bedolla, Kathleen Hou, and Erica Smith
friday sales Aug. 5, 2022
20 Things on Sale You’ll Definitely Want to Buy: From Everlane to Patagonia Including two deals exclusively for Strategist readers.
parties! Aug. 5, 2022
Karen Pittman, Naomi Watts, and More of the Bestest Party Pics From the Week All of our favorite looks to kick off August.
hairy situations Aug. 5, 2022
Doja Cat Doesn’t Think Hair Is ‘Cool’ So she shaved it all off — in front of her followers.
much to think about Aug. 5, 2022
Big Sean Vexed by Big Questions Science has confirmed what the rapper has long sensed is true: Earth’s rotation is speeding up.
fashion Aug. 5, 2022
Want Design Porn? Go to Shelter Island, Ask for Louis Vuitton. A pop-up showcasing the brand’s finest classic bags, furniture, and décor is summering on the island.
always shopping Aug. 5, 2022
21 Leggings for Any Type of Workout Because leggings can make or break a workout.
By Bianca Nieves and Anne Cruz
extremely online Aug. 5, 2022
I Can’t Shut Up About This Pickle An artist flung a pickle from a McDonald’s cheeseburger onto an art-gallery ceiling and was selling it for $6,275.
family Aug. 5, 2022
My Mom Has No Friends The loneliness of growing older made bearable with playdates.
health Aug. 5, 2022
What We Know About Monkeypox So Far The Biden administration has declared the outbreak a public-health emergency.
beauty Aug. 5, 2022
The Future Smells Like Chanel No. 5 The French house has spent decades planning for it.
power Aug. 5, 2022
All of the Allegations Against Kevin Spacey A judge ruled that Spacey, who allegedly sexually harassed House of Cards crew members, must pay almost $31 million to the show’s production company.
lies Aug. 5, 2022
Alex Jones Owes Over $4 Million for His Sandy Hook Lies And possibly more: A jury will now consider punitive damages for two parents whose son died in the massacre.
summer guide 2022 Aug. 5, 2022
Vacation Is Just a Mindset In defense of low-stakes travel.
More Stories