How to Make Political Fashion 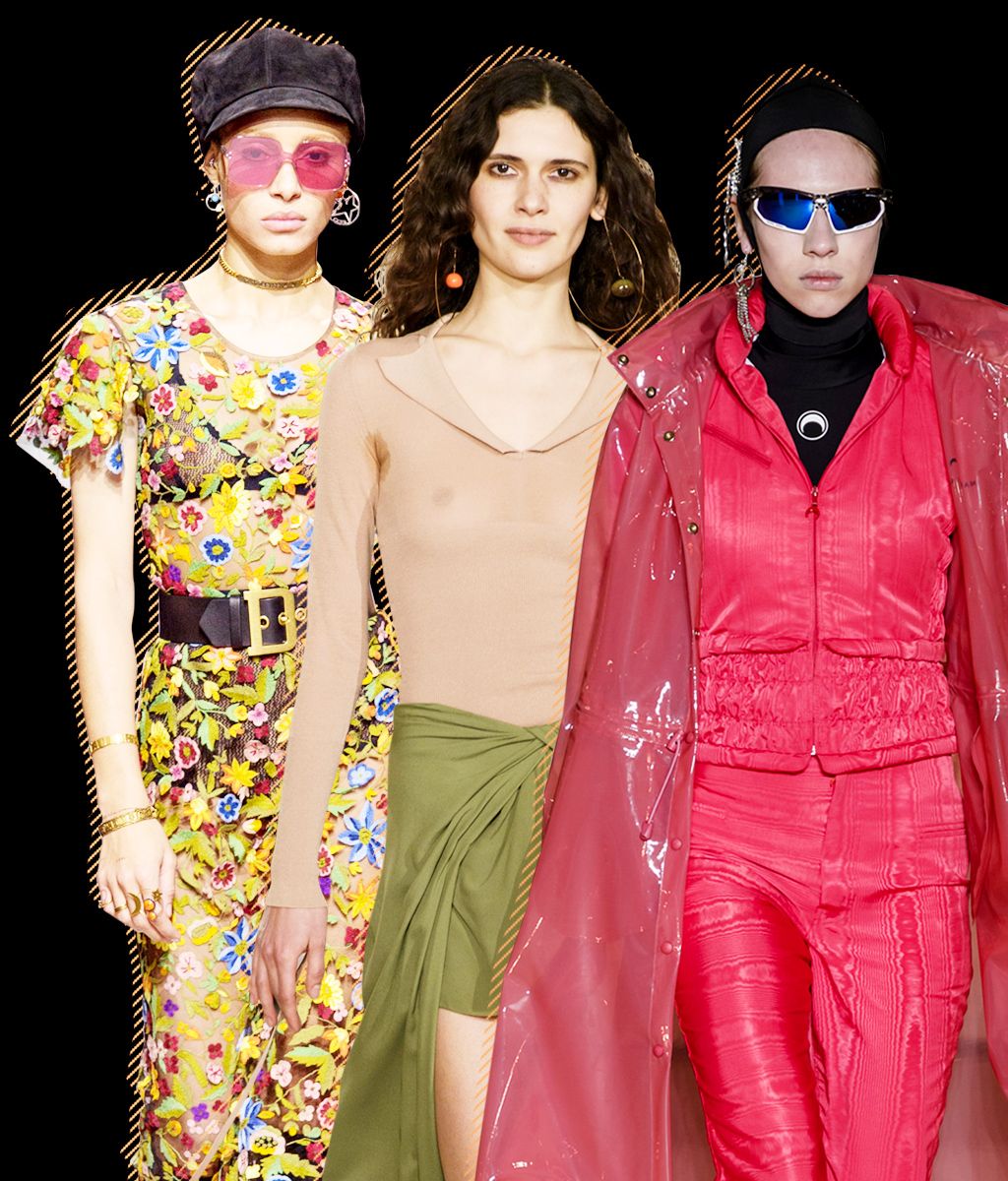 Maria Grazia Chiuri finally found a natural hook for the feminism she’s been pushing at Dior since she took over 18 months ago: the 50th anniversary of the student revolts in Paris. But Chiuri didn’t invoke barricades so much as the “youthquake” that Diana Vreeland offered, heavily wallpapering her show with enlarged tear sheets from 1968 Vogue, as well protest posters. Still, May 1968 is a political touchstone here in France, and it provided Chiuri with a link, however thin, to newer youth movements like #MeToo.

It’s hard not to suspect big brands like Dior of gross opportunism. True, Gucci pledged $500,000 last week to the upcoming student-led March for Our Lives in protest of gun violence, and that seems like the most sincere form of action for an elite industry: Put your money where your mouth is. And to Chiuri’s credit, she didn’t load up her show with 1968 references. How many of her young customers even know what the stakes were? Or how couturiers like Marc Bohan, then at Dior, or Yves Saint Laurent had to challenge rigid conventions of dress?

So Chiuri was wise to plant her fall collection — her best to date — in the fertile fashion ground of the late ’60s, and allow observers to make their own contemporary connections. (Or not.) Given how social media works, Chiuri had already succeeded before the first model came out in a balaclava (cagoule, as the hoods are known here), dark plaid pants, and a chunky sweater that said “C’est non, non, non et non!” That’s because the wallpapered set was incredibly graphic — ideal for a phone screen. Anyone could understand it, add a few hashtagged words, and post. The clothes were just gravy.

As it happens, they were pretty good too. Chiuri has had an annoying habit for the past couple of seasons of presenting three or four unusual styles, almost one-offs, and then returning to a familiar storm of tomboy sportswear and princess lines. This time, though, she showed more variety as well as depth. She beefed up her school-uniform fascination with kilts, in two lengths and in a sheer version, and a terrific boyish pantsuit in gray plaid. She added biker boots and clogs. She presented a bunch of styles in a crazy-quilt pattern, following Raf Simons’s use of quilts at Calvin Klein, but also making a link both to handcrafts in contemporary art and to the kind of DIY patchwork that was popular in the late ’60s and early ’70s (and the subject of numerous books and exhibits on counterculture fashion). She also had fresh-looking, clingy knit dresses in dip-dyed wool and a standout poncho-style raincoat in deep blue. 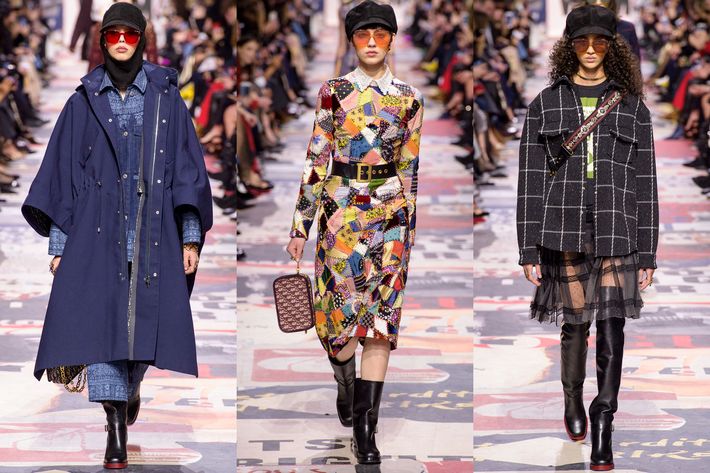 A few hours after the show, I ran into Dominique Deroche, who for many years was the head of PR at Yves Saint Laurent. It has been Arctic cold in Paris, and Dominique had on a cagoule. “It’s 25 years old,” she said, reminding me that Saint Laurent had first done the cap-and-hood combo in 1962 for haute couture and then repeated it occasionally afterward.

Marine Serre, in her runway debut, also had cagoules, but the effect was quite different. Her first collection, done in 2016 while she was still a fashion student in Belgium, was a response to the terrorist bombings in Paris and Brussels that occurred around that time. The collection included a crescent-moon print, a symbol widely identified with Islam. To Serre, the print was a way to suggest inclusion, a merging of ideas — with urban athletic styles, say. It also demonstrated that the designer, who won the LVMH Prize last year, is an ace at branding. The crescent detail is part of her logo.

Serre, unlike Chiuri, is good at implying things. That’s what gave her first professional show an unusual maturity. Her headpieces could have religious connotations, but you’re not sure — they could be standard-issue ski hoods. Similarly, some of her ruffled skirts and shapely denim could be a nod to the 19th century, yet she nicely brooms away the literal reference. Her clothes reveal a solid sense of pragmatism — who’s going to wear these things? are they based on reality? — and at the same time a very strong urge to look ahead and question how fashion should look in the 21st century.

“They all answer to daily life,” she said afterward of slim trousers and jackets with special pockets for phones and ID. “The idea was to rethink how you do outerwear today, and also keeping the shape of the woman.”

Serre is too smart, I think, to let politics or labels or backstories take precedence over the demanding business of making interesting clothes and establishing a clear point of view. That she has done. Not only did she add fresh styles to her sportswear, like the shapely denim, but she also expanded the scarf dresses she showed last season. They’re more fluid and original in both cut and pattern. In fact, the dresses are all made from recycled garments or fabrics found in Marseilles. She plans to produce orders in the same vein. 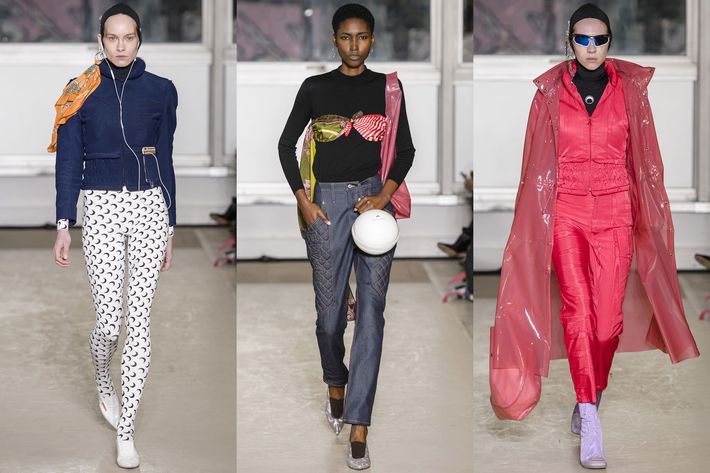 If you were doing a collection based on the colors and sensuality of Morocco — favorite destination of designers — would you present them in the sugary vastness of the Petit Palais? Simon Porte Jacquemus’s clothes were drowned by the venue and the hokey souk music, and though he had some lovely, long fluid looks, he seemed mostly unable to avoid the Marrakech clichés. 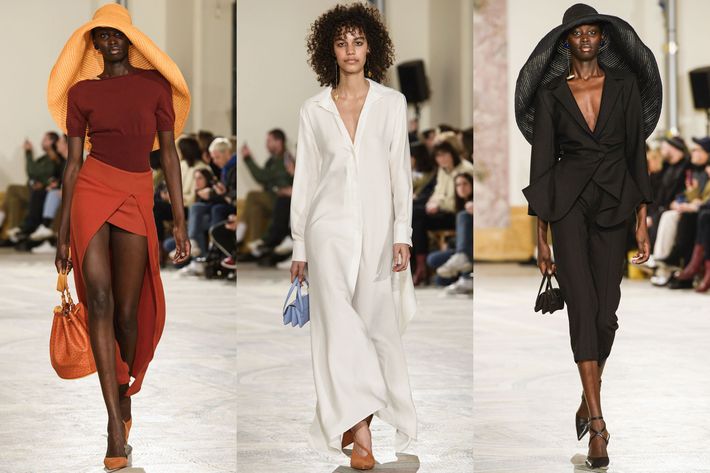 +Comments Leave a Comment
How to Make Political Fashion

first person 9 mins ago
I Changed Everything. Now What? An interstate move, two new jobs, and one serious relationship later, I’ve learned something about the limits of starting over.
By Stacia Brown
celebrity Yesterday at 4:37 p.m.
Hayden Panettiere Calls Giving Up Custody of Her Daughter ‘Heartbreaking’ “It was the worst, signing those papers.”
"try everything" -shakira Yesterday at 4:12 p.m.
Bye, Guy Ned Fulmer, one of four Try Guys, is leaving the Youtube channel after his “consensual workplace” affair went viral.
obsessive tester Yesterday at 4:00 p.m.
21 Hand Creams You Probably Need Right Now Because you’ve been washing them incessantly.
By The Cut
transgender rights Yesterday at 3:32 p.m.
Virginia Students Walk Out in Protest of Anti-Trans Policies Students at over 90 public schools are protesting the governor’s proposal to roll back transgender rights.
celebrity Yesterday at 2:13 p.m.
Elizabeth Chambers Allegedly Tried to Expose Armie Hammer in the Press A friend says Hammer’s estranged wife used her email to leak rumors about him to the press.
power Yesterday at 12:35 p.m.
Women Across Iran Are Protesting the Morality Police Following the death of Mahsa Amini in police custody, women are burning their hijabs and cutting their hair in the streets.
holiday gifts Yesterday at 12:15 p.m.
46 Christmas Gifts for Any Kind of Mom Whether she’s into cooking, skin care, gardening, or relaxing.
By the Cut
gender reveals Yesterday at 11:01 a.m.
Another Gender Reveal Ends in Environmental Disaster A couple in Brazil may have contaminated one town’s water source by dyeing a 60-foot waterfall blue.
gone sale-ing Yesterday at 10:02 a.m.
Saks’ Friends and Family Sale Will Make You Look Forward to Winter Puffer coats, boots, and knitwear, all on sale.
cut chat Yesterday at 10:00 a.m.
Every Thought We Had Watching Don’t Worry Darling For starters, it was definitely a movie.
how i get it done Yesterday at 10:00 a.m.
How Manicurist Jin Soon Choi Gets It Done During Fashion Week “If one hour before the show we still have models to do, my heart starts pounding. I want everything done without any delay or drama.”
By Danya Issawi
dream date Yesterday at 9:00 a.m.
A Hot Time With Harris Dickinson The Triangle of Sadness star reimagines what it means to be a modern man between sauna steams.
By Hanna Hanra
encounter Yesterday at 8:00 a.m.
17 Seconds With a Spotted Lanternfly Face-to-face with the stylish invasive species. So do I smoosh it or not?
By Matthew Schneier
at home in asian america Yesterday at 8:00 a.m.
For Domestic Workers, the Asian Class Divide Begins at Home Five nannies from the Philippines, Nepal, and China open up about what it’s like to work for their Asian American employers.
By Arya Sundaram
ambition Yesterday at 7:00 a.m.
Even Kelly Ripa Has to Deal With Sexist Bulls- - - at Work As the Live! host writes in her new collection of essays, seniority is a “masculine word.”
crime Sept. 26, 2022
A Train Hit a Police Car With a Woman Handcuffed Inside She survived, though her attorney wonders why Colorado officers left their SUV parked directly on the tracks.
mfw spring 2023 Sept. 26, 2022
The Best Street Style at Milan Fashion Week Chic looks from this fashionable city.
royals Sept. 26, 2022
The Palace Is Reportedly Panicking About The Crown Again Royals are concerned the upcoming season will damage King Charles’s reputation.
all in the family Sept. 26, 2022
Untangling the Secrets of a Teenage Mother We think of our parents as known quantities. But as Salon editor-in-chief Erin Keane writes in her memoir, Runaway, we rarely know the whole story.
More Stories