Double Lover opens with a loving shot of a pulsating vulva that quickly and creepily cuts to a shot of an eye — which means, yes, fans of psychosexual thrillers can immediately rest assured that they’re in the presence of a perfect entry into the gloriously trashy genre. And because it’s a French film, directed by master of the genre François Ozon (Swimming Pool), viewers can feel free to wholeheartedly enjoy the glossy veneer of highbrow smutty cinema, the equivalent of last night’s caviar tossed into 24k gold-foil garbage sacks and carted away by men in white gloves. (One can even use its French title, L’Amant Double, should they wish to alienate friends and loved ones. )

An adaptation of Joyce Carol Oates’s Lives of Twins, the film stars Marine Vacth as Chloe, a 25-year-old raven-haired sad. She’s a former model with dark circles under her eyes, a cat as her only companion, and mysterious stomach pains that are most certainly psychosomatic. She lands in the chair of extremely hunky and patient psychoanalyst Paul Meyer (Jérémie Renier), and — you can see where this is headed (toward the erotic) — they ignore some real medical ethics and start a relationship. At first, all seems well. They move in together; Chloe’s mental health is stable, and she gets a new job. But gradually, she learns that Paul has an estranged and dangerous twin brother, Louis Delord (also played by Renier), who is also a psychoanalyst. No spoilers here: They start having sex. Lots of it. There are dark secrets and dangerous lies, and soon Chloe has no idea who she is sleeping with, who is dangerous and who is not, who’s who they actually say they are, and who is lying … but my god, is she turned on.

While it’s certainly the most twisted psychosexual thriller I’ve seen in a while, it’s hardly the most psychologically interesting. Ozon’s exploration of hysteria and frigidity feels tiresome and very male. But at the film’s heart, there is a story about the thrill and danger of a woman pursuing the exact sex she wants. In this case, it’s sex with twin brothers who might be playing a dark mind game. And man, does that sex seem great. 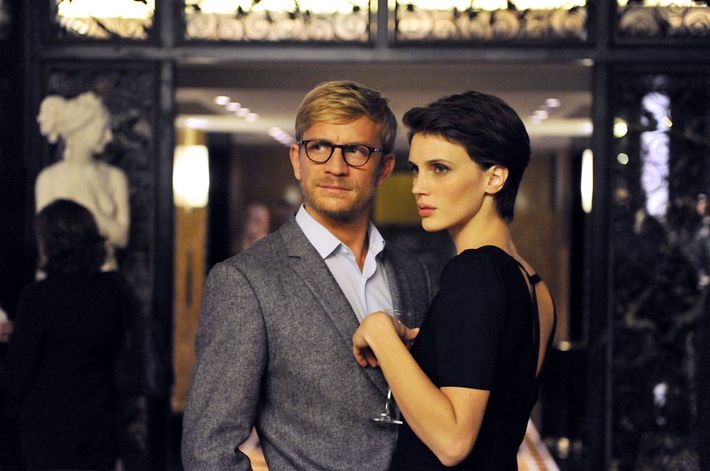 Everything Sucks! Except This Show.

It’s been an incredibly hard week, so the premiere of a highly charming, nostalgic, coming-of-age Netflix series could not come soon enough. Imagine if Freaks and Geeks were set in the ‘90s and you have Everything Sucks! It’s the same general idea: a show that focuses on outcast teens (and some adults) at a high school in Boring, Oregon, where two opposing groups (AV-club nerds and drama kids) find ways to come together to survive the hell that is adolescence. The show is nothing major, an earnest slice of life about a time when little else mattered but making a shot-by-shot version of Oasis’s “Wonderwall” video to ask out your crush (yes, that does happen). Freshman Luke (Jahi Di’Allo Winston) is in love with his fellow AV club member Kate (Peyton Kennedy), which is what most of the story revolves around. But while the plot might sound like a Netflix algorithm is doubling down on our love of Stranger Things and End of the F***ing World, we learn early on that Kate is struggling through a really complicated sexual awakening — suddenly, a charming-ish show that references Tamogatchis and Gwen Stefani’s Tragic Kingdom–era bantu knots becomes a thoughtful show about a young girl’s lesbian coming-of-age.

A Shortcut to a Weekend Soundtrack

Rather than spend any time at all making a playlist that will consist of Drake’s “God’s Plan” and nothing else, take Ravyn Lenae’s new EP, Crush, out for a spin. Lenae is a Chicago neo-soul singer with a love of disco (both aesthetically and sonically). Songs like “The Night Song,” about getting ready to go out, are personal and self-affirming, as if SZA had a love-child with Diana Ross. (Appropriate, since Lenae spent the summer opening for SZA on tour.) Check out the especially and diabolically catchy “Sticky.” 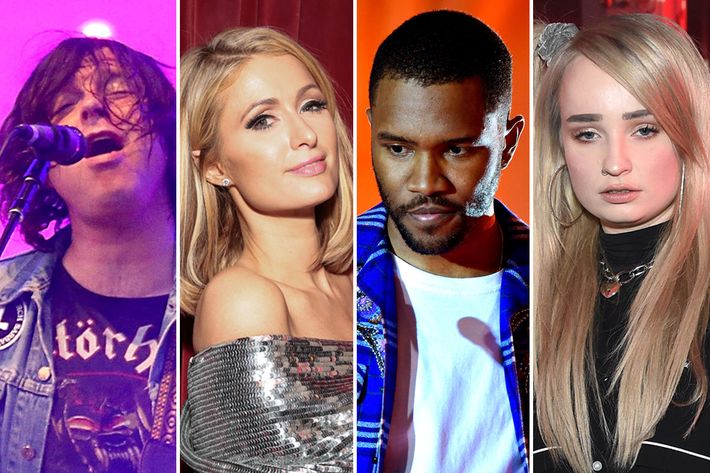 Just because they love us, a handful of artists put out Valentine’s Day singles this year. Here, a quick ranking, from “Better than being in love” to “Worse than getting dumped via Instagram DM on your birthday.”

1. “Moon River,” Frank Ocean: Oh I’m sorry. Did you need your heart? Because out of nowhere, Frank Ocean reached into your chest cavity and ripped it out. Enjoy his sparse and very him cover of “Moon River.” And know that somewhere, Brad Pitt is weeping beautifully, just like us.

2. Kim Petras, “Heart to Break”: Love often inspires the best songs, and with heartache, even better ones. Petras, a German pop singer worthy of all obsession, turned heartbreak into an excellent and frothy electro-pop song . You’ll dance through your tears and cry through your dance moves.

3.“Baby I Love You,” Ryan Adams: Jangly guitars, check. Plaintive male singing voice, check. Ryan Adams on the same old bullshit since the early aughts, check. Sad-sack lyrics. None. What? That’s right, in a not-terrible song, it seems Ryan Adams has decided to be happy. There is hope for all of us

4. “I Need You,” Paris Hilton: If only we were all as committed to our SO’s as Paris is to her 2006 self. Sadly, those of us hoping for something as perfect as “Stars Are Blind” are in for true heartbreak with this single.

+Comments Leave a Comment
Yes, the Twin Brothers in Double Lover Make Out.

friday sales 10:51 a.m.
25 Things on Sale You’ll Actually Want to Buy: From Staub to Good American Including a fuzzy Patagonia fleece for humans and a fuzzy fleece bed for dogs.
fantasies 10:48 a.m.
Brad, Stop Toying With Us Once again he has wrought emotional chaos, this time by openly flirting with Jennifer Aniston over Zoom.
power 9:50 a.m.
What Is Going on at The Ellen DeGeneres Show? Three top producers accused of sexual harassment and abuse have been terminated.
hot bod 8:00 a.m.
Slouching Toward Six Months of Bad Posture Just give me a reason to stand up straight.
By Maggie Lange
power Yesterday at 10:00 p.m.
Trump Says Teaching Kids About System Racism Is ‘Child Abuse’ The president’s new 1776 Commission will purportedly promote “patriotic education.”
sex diaries Yesterday at 8:00 p.m.
The Ethically Nonmonogamous Woman Sick of Virtual Playdates Welcome to Sex Diaries week.
nyfw spring 2021 Yesterday at 7:05 p.m.
Tom Ford Gets Vulnerable The master showman offers a peek behind the curtain.
By Cathy Horyn
coronavirus Yesterday at 6:59 p.m.
The White House Stopped the USPS From Sending Out Free Masks According to an infuriating new report from the Washington Post.
lfw spring 2021 Yesterday at 6:23 p.m.
Burberry Brought Its Fashion Show to the Woods Take a look at the spring 2021 collection.
now smell this Yesterday at 6:00 p.m.
Time to Watch Lady Gaga Sing in a Forest Her new Valentino fragrance campaign has arrived.
cursed images Yesterday at 5:52 p.m.
Tremble Before This Sack of Wet Eggs A close look at the wretched image that went viral this week.
ice detention Yesterday at 4:50 p.m.
ICE Tried to Deport a Woman Who Says She Was Sterilized in Custody After Pauline Binam woke up from what she thought was a routine procedure, a gynecologist said she might be infertile.
crime Yesterday at 3:05 p.m.
Jerry From Cheer Arrested on Child-Pornography Charges The arrest follows allegations from two twin boys who say the Cheer star solicited sex and nude pictures from them.
bad gal Yesterday at 2:46 p.m.
Oh Thank God, Rihanna’s Back “Savage x Fenty Show Vol. 2” will stream on October 2.
on the rise Yesterday at 2:44 p.m.
This Designer’s Secret Ingredient Is Good Vibes Sade Mims says her accessories line, Edas, is made with love.
By Andrew Nguyen
fashion Yesterday at 2:08 p.m.
Telfar’s New Ugg Campaign Will Make You Feel Ohhhh So Good “I find Ugg really sexy,” said the designer.
sex diaries Yesterday at 2:00 p.m.
The Divorced New Jersey Mom Looking for Women on Dating Apps Welcome to Sex Diaries week.
sexual assault Yesterday at 12:07 p.m.
Yet Another Woman Has Accused Trump of Sexual Assault Former model Amy Dorris says Trump forced his tongue down her throat and groped her at the 1997 U.S. Open.
nyfw spring 2021 Yesterday at 11:37 a.m.
Monse Is Sharply Focused During a Fashion Week unlike any other, the brand unveiled a smart collection.
By Cathy Horyn
coronavirus Yesterday at 11:15 a.m.
What’s Going on With School Reopenings? As many schools try to resume in-person classes, we’re seeing more and more Covid outbreaks.
More Stories