On Tuesday night, the fashion industry was presented with a “Blacklist” of photographers, agents, and stylists accused of sexual harassment and assault. Published by the anonymous Instagram account @ShitModelMgmt, the list is the fashion equivalent of the Shitty Media Men Google spreadsheet, which was created in October by Moira Donegan in an effort to protect women from predatory behavior.

“The following list contains the names of people in the fashion industry that I SUGGEST models avoid,” reads the Blacklist’s introduction. “This is not a concrete list, it is only a strong suggestion based on solid information.”

Names listed only once are considered a “warning” for models, however, names with an asterisk have been reported over three times and, in the opinion of the Blacklist’s author, should be “avoided at all cost.”

According to the publisher, there are 290 names listed, all of which have been collected via Instagram direct messages and emails over the past few months. The specifics of these allegations have not been shared, although the publisher claims they range from sexual harassment to rape. Familiar names on the list include Bruce Weber and Mario Testino, who have both been accused of sexual exploitation reported by the Times and the Boston Globe Spotlight team.

@ShitModelMgmt originally began as a meme account for venting about the industry, and the administrator is a former model herself. A few months ago, she put out a call for followers to share their stories and her inbox was quickly flooded. She shared many of the messages she got in her stories, blurring out the names of accusers but not those accused. She promised to eventually compile the names into a list.

It took some time for the Blacklist’s publisher to write every name down. “It also took a long time for me to gather the bravery to do it,” she told the Cut Wednesday afternoon.

“I made this list as a reference for models so that they can be safe,” she explained, adding that she wishes she’d had a resource like this when she was starting out. Despite the immediate backlash she’s been getting from those named — some have threatened legal action — the support she’s received from peers reaffirms her belief that a list of this nature is necessary.

“A lot of people have been thanking me because they were assaulted by someone on the list and feel better now that they’ve seen someone else say the same thing,” she said. “They’re like, ‘I don’t feel crazy anymore. A huge weight has been lifted off my shoulders knowing I’m not the only one.’” 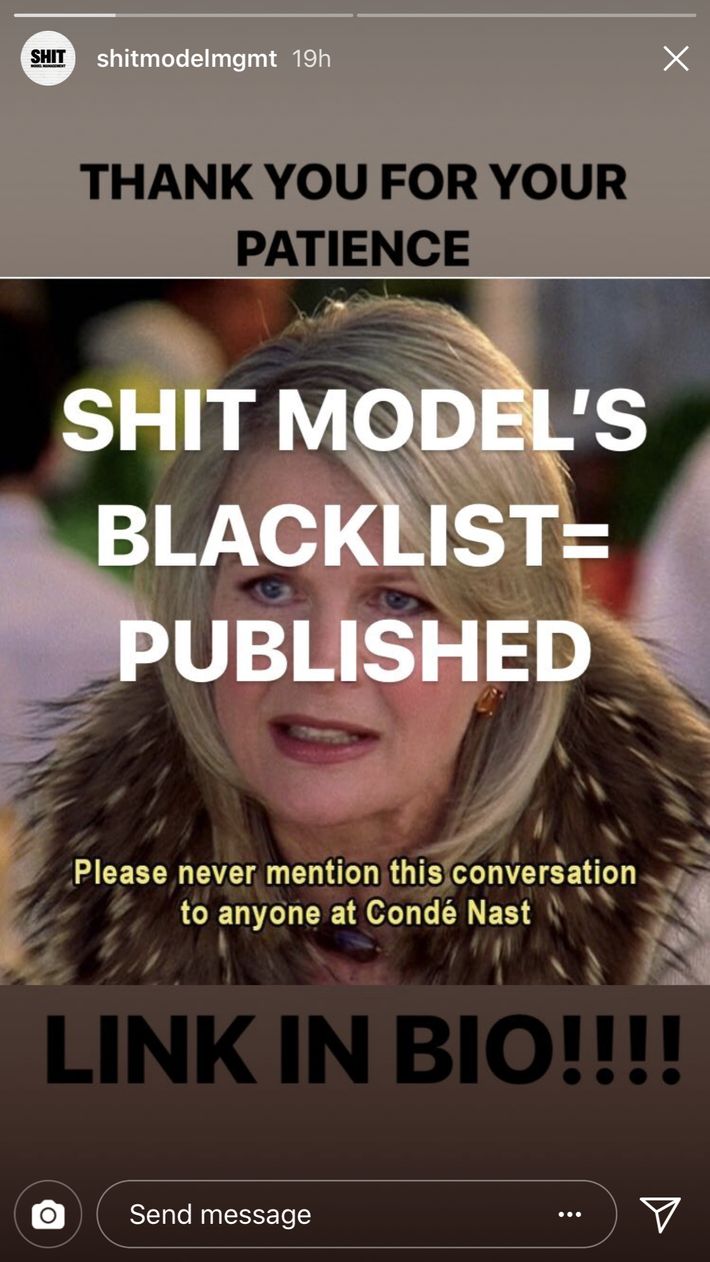 In an effort to keep the Blacklist as accurate as possible, the publisher is open to amending it. “If a photographer DMs me saying he didn’t do anything wrong, begging me to take him off the list, I’ll take the name down,” she said, adding that she’s already done so for “a few” names. That being said, if someone has been reported multiple times, she will not remove them.

It’s a lot of power and responsibility for one person, and her actions coincide with a larger conversation currently happening about the pros and cons of unregulated whisper networks, particularly those online.

“My intentions are good,” the Blacklist’s publisher argued. “I’m not trying to slander anyone and I don’t want to put anything up that’s not true. I’m not the judge.”

The publisher also expressed interest in reaching out to the Model Alliance, an organization founded in 2012 with its own grievance reporting and advice service.

As for legal retaliation, the Blacklist’s publisher says she’s not super worried because she’s anonymous. She cites Section 230 of the Communications Decency Act in the list’s introduction, which broadly protects web hosts against legal claims “arising from hosting information written by third parties.” However, according to Julie Zerbo of the Fashion Law, “one could potentially argue that she is actively compiling all of this information and thereby not immune (by way of s. 230 protections) from claims of defamation.”

In the meantime, the Blacklist’s publisher is more concerned with the prospect of @ShitModelMgmt being suspended. “I’m going to try to keep [the list] up for as long as I can,” she said. “It may not be pretty and fun, but it’s something everybody needs for safety.” She added, “I choose to believe these models.”

astrology 8:30 p.m.
Madame Clairevoyant: Horoscopes for the Week of November 28 Jupiter retrograde is ending, so you can put the rose-colored glasses back on.
By Claire Comstock-Gay
sex diaries 8:00 p.m.
The Divorced Lawyer Who Loves Getting Ready for Dates This week’s sex diary.
snacks Nov. 25, 2022
I Can’t Shut Up About Spam Figgy Pudding It’s so wrong, and yet so right.
gone sale-ing Nov. 25, 2022
25 Black Friday Lifestyle Deals to Make Your Humble Abode a Little Less Humble It’s all in the details.
black friday Nov. 25, 2022
22 Best Black Friday Fashion Deals From Everlane, Nordstrom, Saks, and more.
culture Nov. 25, 2022
Rebranding Midlife Celebrities like Naomi Watts, Stacy London, and Judy Greer are determined to make a business out of menopause.
gone sale-ing Nov. 25, 2022
36 Amazon Gift Ideas That Are Also On Sale For Black Friday Kill two bird with one stone.
5 questions with... Nov. 25, 2022
For Quentin Plair, Stripping Wasn’t Always on the Menu But the Welcome to Chippendales star’s confidence was renewed after playing an exotic dancer on TV.
gone sale-ing Nov. 25, 2022
The 27 Best Black Friday Beauty Deals Tatcha, Sephora, and Nordstrom are already offering some great discounts.
5 questions with... Nov. 25, 2022
How Amanda Gorman Fostered Her Confidence It didn’t always come naturally, but the poet built it with affirmations from her mom and using her imagery as activism.
¡hola papi! Nov. 25, 2022
‘I Lost My Creative Spark’ Don’t think about the book you haven’t written or the drawing you haven’t sketched out. Think about what role you want art to play in your daily life.
By J.P. Brammer
star material Nov. 24, 2022
A Handy Guide to Astrology’s Black Moon Lilith Lots of mystery and intrigue with this one.
5 questions with... Nov. 24, 2022
Pauline Chalamet Shares Her Most Embarrassing College Story Live lobsters were involved.
my two cents Nov. 24, 2022
How to Buy the Best Gifts With Less Money and Time It’s simple: Ask people what they want.
By Charlotte Cowles
celebrity Nov. 23, 2022
Pete Davidson and Emily Ratajkowski Hit a New Relationship Milestone The rumored couple reportedly celebrated Friendsgiving together.
chaos Nov. 23, 2022
Taylor Swift’s Ticketmaster Disaster Is Going to the Senate Congress will hold a hearing on competition in the ticketing industry.
ch-ch-changes Nov. 23, 2022
Alessandro Michele Confirmed Out at Gucci The creative director, who transformed the brand into a more playful, quirky, and gender-fluid version of itself, is exiting after almost eight years.
style Nov. 23, 2022
Is it a Crime to Go to the Met Gala? If you’re a sitting U.S. representative, the answer might be yes.
holiday gifts Nov. 23, 2022
These Nordstrom Black Friday Deals Should Be on Your Gifting Radar At every price point.
tis the season Nov. 23, 2022
Sir Elton John Lights Up Fifth Avenue For Saks’s annual holiday-window unveiling.
More Stories