Eileen Fisher Has a New Intern

His name is Heron Preston. 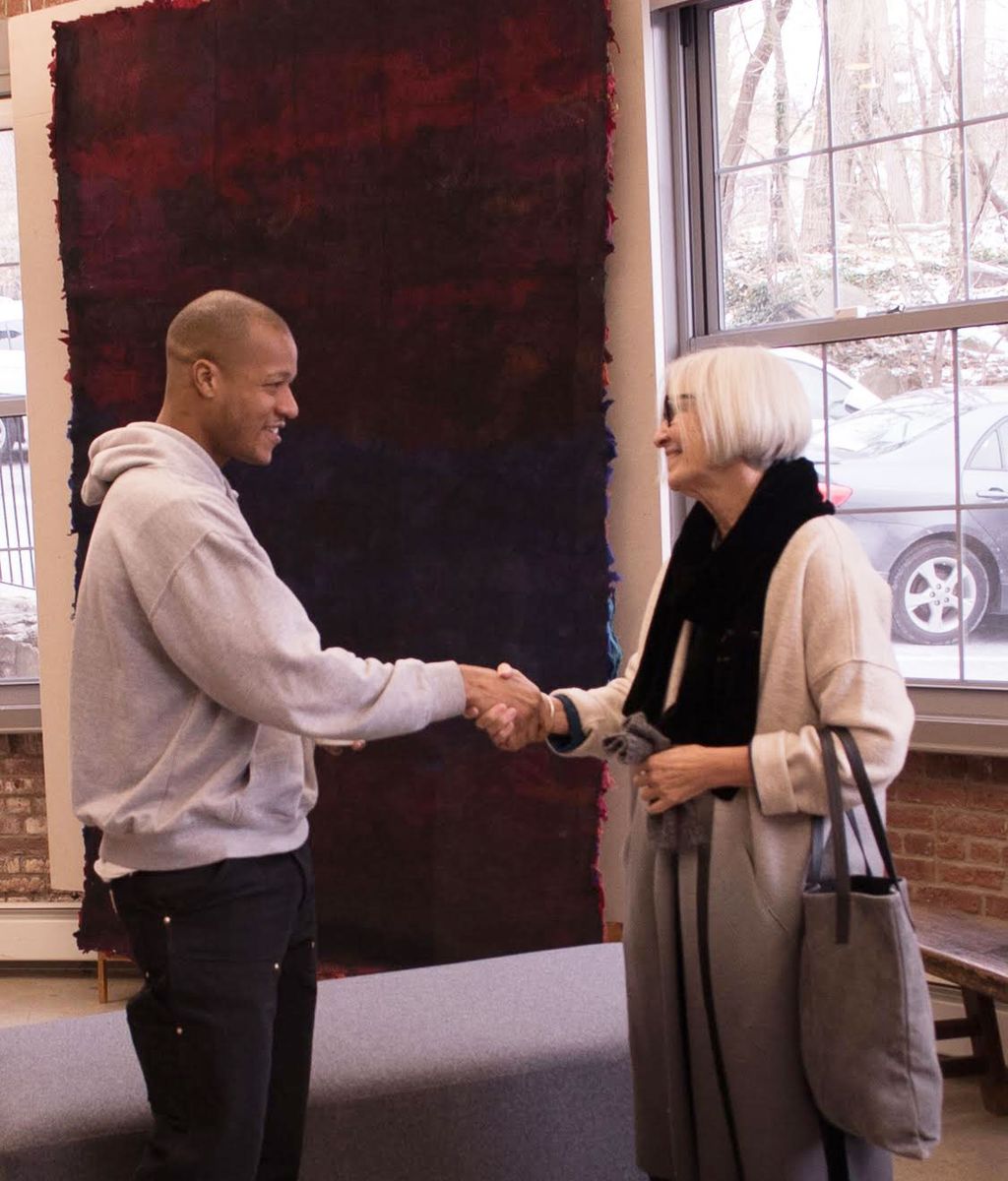 Sustain/Ability is a week of stories about how fashion impacts the environment.

On a snowy Friday morning after the Supreme holiday party in December, Heron Preston woke up early, got in a car, and rode the hour-long commute up to Irvington, New York. It was here that he would complete his week-long apprenticeship at the Eileen Fisher headquarters, working specifically with Renew, the brand’s clothing take-back and reuse program.

The Eileen Fisher headquarters is not the first place you might expect to find the 33-year-old streetwear designer, whose friends and past collaborators include Virgil Abloh and Kanye West. Admittedly, Preston doesn’t own any Eileen Fisher cardigans or calf-length sack dresses, nor do any of his contemporaries. (They have a “different consumer base,” Preston explained politely.)

Fisher, who started her company in 1984, didn’t know of Preston and his work until a few months ago. (“I’m pretty out of the loop,” she said with a laugh.) But upon meeting, Preston and Fisher discovered that they shared a commitment to producing sustainable fashion — a mission that just about anyone can get behind.

Preston loves an unlikely pairing. In September 2016, he showed a capsule collection at New York Fashion Week in partnership with the Department of Sanitation. The idea was to raise awareness for the city’s 0x30 campaign, which aims to send zero waist to landfills by 2030. The collection included up-cycled hoodies, tees, and accessories made out of donated DSNY uniforms, which Preston then sold for $60 to $600. Half of all sales from his Fashion Week event, which took place at the DSNY Salt Shed as opposed to a traditional runway venue, went to the Foundation for New York’s Strongest.

His stint at Eileen Fisher is a continuation of that ethos. “I want people to know I’m serious about this,” said Preston. “It wasn’t just a one time thing.”

Fisher has a long history of producing sustainable fashion — rivaled only by Patagonia in size and ambition. During his apprenticeship, Preston hoped to learn more about up-cycling, circular design, supply chain innovation, and how to apply general environmental consciousness to his operation.

Fisher can fairly be called the Fendi of sustainability. Since 2009, the company has quietly been running a robust clothing take-back program called Renew, which offers customers $5 dollars for every article of the brand’s clothing that they return — even if it’s been worn to shreds. The pieces are sorted according to condition, salvaged when possible, and then resold at select locations at affordable price-points. In the past nine years, Eileen Fisher has taken back over 800,000 garments. The brand’s goal is to be completely sustainable by 2020.

“Even if we become a 100 percent sustainable company, we’re just one,” says Fisher. “It’s just not enough in this huge industry. So we took on the mission to share what we know and educate others, especially young designers. They’re going to change the fashion industry and the world.”

Preston spent his first day at Eileen Fisher in the sorting department of Renew. The space looks like a combination of a laundromat and a factory, with piles and piles of clothing meticulously organized by style, color, and fiber. Not only is the company’s take-back program good for the earth, but it also educates the design team about what works and what doesn’t. After receiving a number of clothes with armpit stains, for example, they asked themselves: Should we put seams there, so that part of the garment can be easily replaced?

By the end of the week, Preston was working with Renew designer Carmen Gama on fashioning a two-piece top out of scraps from linen pants. He spent the rest of his days asking “a bunch” of questions and meeting with people at the company with titles like Head of Sustainability. He was also given the Eileen Fisher Vision 2020 project plan book. “Literally, they just gave me the Bible,” Preston said with an enormous grin.

When Preston and Fisher sat down for a one-on-one session at the end of his internship, she gave him some advice: “Take small steps,” she said. “You can’t attack everything at once.”

This goes against every fiber of Preston’s always-curious, Energizer-Bunny-in-cargo-pants being, which is why it was exactly what he needed to hear. When I asked him what he made of Fisher’s advice, Preston translated it as a prompt: “Dude, just go.”

See All
power Yesterday at 4:21 p.m.
Darnella Frazier Was Awarded a Pulitzer Citation The teen who filmed the murder of George Floyd was honored with the prestigious journalism award.
gift guides Yesterday at 4:15 p.m.
21 Father’s Day Gifts for the Fancy Man A high-end guide for the high-end dad.
wellness theories Yesterday at 2:07 p.m.
The Model Who Swears By Alternate-Nostril Breathing Pritika Swarup explains her approach to wellness.
culture Yesterday at 1:21 p.m.
Thot Girl Summer Has Officially Begun Megan Thee Stallion just dropped her latest music video.
a beautiful life Yesterday at 1:18 p.m.
The Actress and Pop Star Who Is Always Unapologetically Herself Talking to Mandy Moore about beauty, motherhood, and fame.
shopping Yesterday at 12:10 p.m.
Are You Ready to Wear House Dresses Out of the House? New Entireworld styles, approved by Selma Blair.
friday sales Yesterday at 12:01 p.m.
22 Things on Sale You’ll Actually Want to Buy: From Glossier to Filson Including lots of things that would make a great Father’s Day gift.
hallelujah Yesterday at 11:44 a.m.
She Is Risen All rejoice, Lorde’s new single “Solar Power” is here.
swellness Yesterday at 9:42 a.m.
Why Doctors Still Struggle to Detect Skin Cancer in Black People Melanoma cases in people of color often get overlooked — until it’s too late.
hot bod Yesterday at 8:00 a.m.
This Book Will Make You Go Wild This Summer Waterlog, a cultish 1999 travelogue dedicated to the joys of wild swimming, has just been published in the U.S.
¡hola papi! Yesterday at 6:00 a.m.
‘I’m Ashamed of Who I Used to Be’ While you can’t change the past, you do have a good deal of agency in how you frame it and tell your own story.
By J.P. Brammer
crime June 10, 2021
A Cop Sent Himself a Woman’s Nudes While Detaining Her Former Minnesota state trooper Albert Kuehne pleaded guilty to the theft this week.
...okay June 10, 2021
Looks Like Kanye West and Irina Shayk Are a Thing Now The two were photographed together in France for his birthday earlier this week.
zdi June 10, 2021
Noted Zoom Masturbator Back on TV Jeffrey Toobin returns to CNN, eight months after the Zoom Dick Incident.
the hamptons June 10, 2021
Gucci Is Returning to the Hamptons And it’s there to stay.
fashion June 10, 2021
What Did Jill Biden Really Mean With That Jacket? It’s hard not to read it as a dig at Melania.
gift guides June 10, 2021
26 Father’s Day Gifts for Dads Who Love to Cook (or Eat) Whether he’s into wine, coffee, or Sichuan spices.
power June 10, 2021
Huma Abedin Is Releasing a Memoir The book apparently includes “a candid and moving reckoning” of her marriage to Anthony Weiner.
bennifer June 10, 2021
Looks Like Bennifer May Be Getting Pretty Serious? J.Lo is reportedly moving to Los Angeles for a “fresh start” with Ben Affleck.
glossy glossier glossiest June 10, 2021
Every Single Thing at Glossier Is on Sale Right Now Run, don’t walk.
More Stories