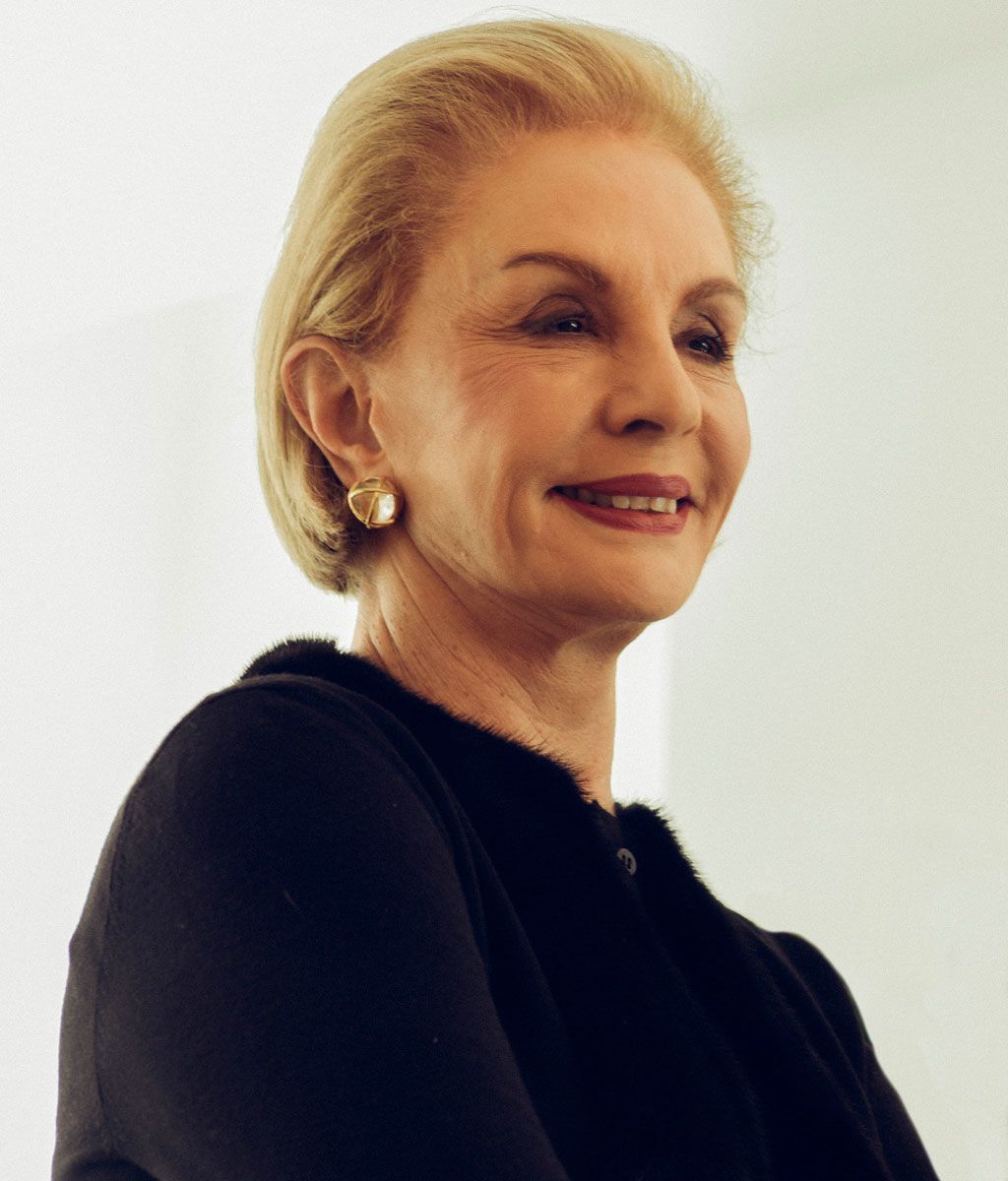 “I always have this nightmare when a show is coming up,” says fashion designer Carolina Herrera, who presented her final collection for her 37-year-old house on Monday, February 12. “We go to the show and everybody’s there. It’s full of people, and suddenly I realize we are not ready. And I have to come out and stand in front of everyone and say, ‘Can you please come back tomorrow?’” But on Sunday night at the MoMA, one of Mrs. Herrera’s favorite museums, she was most definitely prepared, down to the last hemline.

The show came just days after the house announced that Mrs. Herrera would be leaving her role as creative director of the brand she founded in 1981, and ceding the reins to designer Wes Gordon, who has quietly been working at her side for the past 11 months. Mrs. Herrera, meanwhile, will take on the role of global brand ambassador, which means she’ll be “promoting the CH brand and fragrance all over the world.”

Scenes from the fitting at the Carolina Herrera headquarters in New York for the Fall 2018 show. Photos by Alex Hodor-Lee. Produced by Biel Parklee.

The Venezuela-born, New York-based Mrs. Herrera has long been viewed as the grande dame of American fashion, putting forth a vision of impeccable elegance that was very much in evidence in her final foray. “This collection celebrates opulence, glamour, and beauty. It embraces bold colors, rich fabrics, and feminine silhouettes,” Mrs. Herrera tells the Cut exclusively.

Details of the looks for Carolina Herrera fall 2018. Photos by Alex Hodor-Lee. Produced by Biel Parklee.

It began with models in sweeping skirts and pants alongside takes on the white blouse, Mrs. Herrera’s signature. Soon, it evolved into a parade of dresses printed with big cats on the prowl, multi-hued tulle gowns, and a snow-leopard print mink coat — all the picture of ladylike sophistication. For the finale, models walked out in matching crisp white blouses paired with belted skirts of myriad colors, before Mrs. Herrera emerged, to thunderous applause and a standing ovation, for her final bow.

It was an emotionally charged moment, with the white coat–wearing members of Mrs. Herrera’s in-house atelier beaming by her side, and it only got sweeter as the designer welcomed Gordon, who presented her with a bouquet of roses, to the runway.

Mrs. Herrera explains, “This collection is also inspired by the house traditions of craftsmanship, which is why it was so important for me to include my atelier when I took my bow.” And Gordon? “I trust him,” Mrs. Herrera says. “Wes is the right person to continue my work.”

Of her own new chapter, “I chose my new title,” Mrs. Herrera affirms. “It felt like the right time. By doing six collections a year [a single collection takes up to six months to complete], I didn’t have time to focus on anything but fashion. This will allow me to spend more time at home with my husband, grandchildren, and great-grandchildren,” while supporting the brand on a global scale.

The decision doesn’t come without a bit of nostalgia, however. As Mrs. Herrera looks back on her storied career, which began after she moved to New York in 1980, she says that “One of my proudest moments was the finale of my first show. It was so glamorous, fashionable, and wonderful. However, I am most proud when I see a woman looking sensational and feeling her best in Carolina Herrera.” Here’s to the designer’s next act.

From Left: Carolina Herrera and Wes Gordon at the finale of the show; Herrera and her atelier team taking her last bow. Photos by Fernanda Calfat/Getty Images.

+Comments Leave a Comment
Carolina Herrera Takes a Bow
runway beauty Yesterday at 6:07 p.m.
Forget an ‘It’ Bag. How About ‘It’ Ears? Burberry’s hottest runway accessory.
fashion Yesterday at 6:01 p.m.
Fendace: The Wife Swap of the Fashion World Versace and Fendi switched designers in an opulent, supermodel-studded show.
surprise surprise Yesterday at 5:33 p.m.
Guess Who’s Still Extremely Happy and in Love? These two, kissing again.
crime Yesterday at 4:33 p.m.
She Warned Us About R. Kelly. No One Believed Her. Sparkle has been waiting 20 years for this verdict.
By Angelina Chapin
scent memories Yesterday at 4:01 p.m.
For This Skin-Care CEO, Happiness Smells Like Fresh-Cut Grass Deciem co-founder Nicola Kilner shares her favorite scents, from Central Park to her brand’s brick-and-mortar stores.
By Erica Smith
law & order Yesterday at 3:45 p.m.
Treat Stealthing Like the Crime That It Is Already A change to California’s civil code could make the act of agreeing to protected sex and then surreptitiously ditching the condom illegal.
crime Yesterday at 3:36 p.m.
R. Kelly Found Guilty of All Counts in Sex-Trafficking Trial The singer could face life in prison.
crime Yesterday at 3:29 p.m.
The Most Harrowing Testimony From R. Kelly’s Trial The singer has been found guilty of all counts in his racketeering and sex-trafficking trial.
finer things Yesterday at 3:20 p.m.
Gloves That Will Never Go Out of Style Camel gloves to wear with your camel coat this winter.
By Emilia Petrarca
celebrity Yesterday at 3:05 p.m.
Lena Dunham Secretly Got Married She and musician Luis Felber tied the knot over the weekend.
free britney Yesterday at 2:08 p.m.
Wow, Jamie Spears Seems Obsessed With Britney’s Boyfriends The singer’s father reportedly went to great lengths to monitor her dating life, from making her boyfriends sign NDAs to hiring private investigators.
suspicious Yesterday at 12:55 p.m.
Are Angelina Jolie and the Weeknd Really ‘Just Networking’? A new euphemism.
a beautiful life Yesterday at 12:54 p.m.
Marc Jacobs on Beauty and Not Being Nutella “They say that if you please everyone, you’ve done nothing. Then you’re a jar of Nutella.”
mfw spring 2022 Yesterday at 12:24 p.m.
At Milan Fashion Week, Marni Gets Emotional Marni’s creative director, Francesco Risso, showed clothes that moved, in a presentation unlike any other.
By Cathy Horyn
street style Yesterday at 12:04 p.m.
Are New Yorkers ‘Dopamine Dressing’? After a colorful summer, will locals wear less black this fall?
working it out Yesterday at 12:00 p.m.
Code-Switching Has No Place at This Bed-Stuy Spin Studio “Wellness is a place where you should be able to bring your most authentic self because you’re healing.”
the most fertile man Yesterday at 11:54 a.m.
Nick Cannon Says His Therapist Thinks He Should Be Celibate Is his reign as Most Fertile Man coming to an end?!
brace yourself Yesterday at 10:49 a.m.
Bridgerton’s Back, Baby Netflix has dropped its first look at the second season’s main couple.
simple pleasures Yesterday at 10:42 a.m.
I Love How Much Channing Tatum Loves Memes “Broo I laughed and felt this hard!!!”
unreal Yesterday at 10:37 a.m.
The View’s COVID Chaos Continues Last week, two hosts tested positive for COVID mid-show — but it turns out their tests were inaccurate.
More Stories