New York Fashion Week: Men’s ran over three days this week, and all three were rife with breaking news, from the stock market plunge on Monday to the revelation on Wednesday that White House Staff Secretary Rob Porter was resigning after abuse allegations from two of his ex-wives. How can mere men’s fashion stand up to that?

Nonetheless, in a slick show that was the climax of the roster even though it fell at the midpoint of the schedule Tuesday night, Tom Ford made his fevered case for why we still need men’s fashion shows even though, more and more, they seem headed for extinction.

As the biannual season kicks off this week in New York and then moves on to London, Milan and Paris, it seems most of the runway stars — Raf Simons for Calvin Klein, Jonathan Anderson, Burberry, Alessandro Michele for Gucci, Saint Laurent — are going all-in and putting men and women together on the runway.

Ford held forth in Women’s Wear Daily on the day of his show, his first all-men’s outing stateside and a nod to his label’s 10th anniversary, about why he still believes in men’s presentations, noting that men are “excited by a change in the lapel. They are excited by a change in a shoulder or by the use of a new fabric, by very subtle things.”

Of course, Tom the consummate showman didn’t stint on the drama either. Aside from some flashy underwear, Ford offered much more for peacocking men. He opened with a tonal look, one of his trademarks: ivory shearling jean jacket, python-print trousers and matching rocker boots with oversize amber shades. (Never forget that Ford started his post-Gucci comeback with eyewear.) Then came his signature wide-lapel suits in shiny pink and yellow, to suit his L.A. customers in his new hometown, and gray pinstripes, which his East Coast customers will mostly buy; youthfully paired with bare ankles and a tassel loafer/athletic sneaker hybrid. Outerwear was particularly strong and he signed off with his signature jazzy dinner jackets in printed metallics, over Lurex turtlenecks this time. 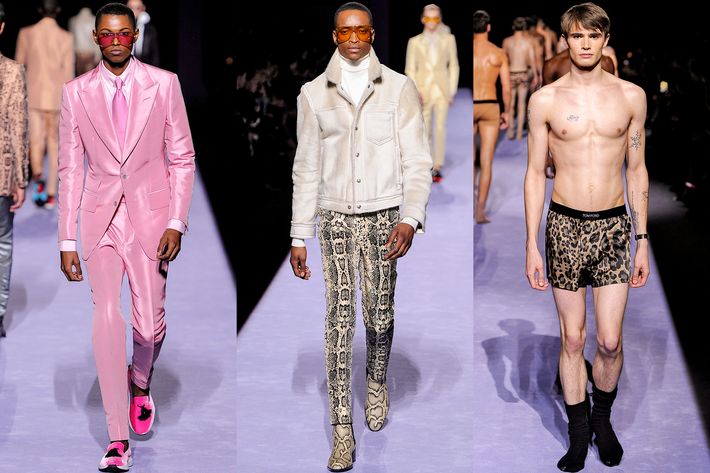 Writer and gadabout Derek Blasberg said he thought the show was great afterwards.“It was smart of him to do underwear. Look what it did for Calvin Klein.” He hit on a good point.Though Raf Simons is installed as Klein’s successor at his namesake house, in many ways Ford is his spiritual heir. Calvin in his prime and Ford share a love of skin, a willingness to shock and a unerring sense of how to impact the larger culture. 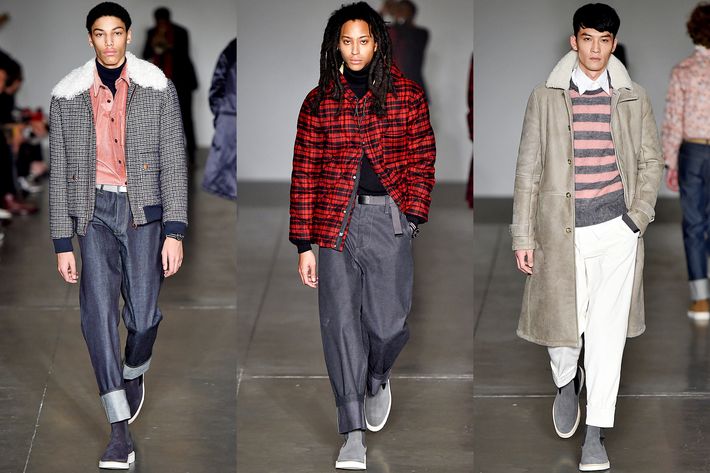 Snyder dubbed the collection “smart slacker” in his show notes. There were some amazing coats: a full-length buff shearling over a collegiate pink and gray pullover and off-white jeans comes to mind. His mixes of jock-wear and tailored pieces — like a red-and-black tartan greatcoat over a hoodie and sweatpants — always look fresh. The only quibble was whether this was really the time to dabble again in schoolboy chic, but maybe taking refuge on a mythical campus was the designer’s way of dealing with the turmoil of 2018 reality.

Also delving into youthful fantasy were the brothers Ovadia, Shimon and Ariel, who mined memories of ’90s-era concerts in New York, trying to re-create the feeling at historic Irving Plaza. The period details went down to the “mixtape” cassettes on each seat — cleverly packaged show notes. But the punky tartans and rockabilly jackets also had a Western feel. One photographer was heard saying, “It was the ‘Swingers’ collection,” referencing the seminal ’90s Vince Vaughn film set in Las Vegas. And some pieces you could already see sitting on the floor at Bloomingdales next season, like the raw denim jeans with flame stitching up the side and the roulette-wheel sport shirt. To quote the Vaughn character, they were “money.” 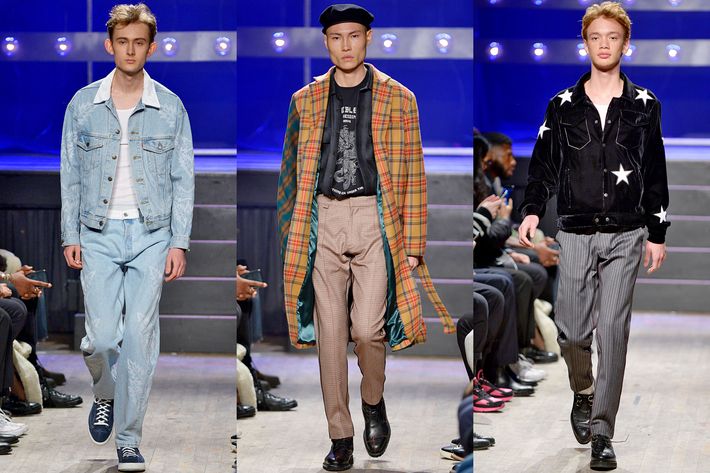 Emily Bode’s quirky homespun Bode collection is also a comfort in these times. Last season, her men lolled around in bed in their faded quilt jackets and florals. They season, at least, they were upright in old-timey patchwork suits and botanical prints, accented with foulards tied in a droopy bow at the neck. Bode said she took her cue from a botanist named Homer she knew while growing up and that his vision was “whimsical and also a little sad” in the way it relates to the world these days. 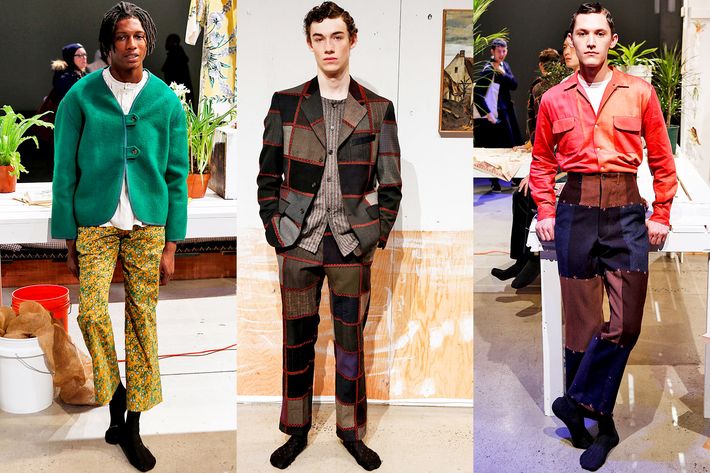 Willy Chavarria was definitely trafficking in a harder reality with his street-tough casting and workwear-inspired grays and blacks. Often bare chested and tattooed, the men also sometimes sported golden tears affixed to their faces in a plaintive silent cry. There were interesting layers, like a cropped bomber over a leather jean jacket with wide cholo-style jeans. Also notable was a long overcoat in a prison-gray, rough blanket wool worn over “Willy” tighty-whiteys (unlike Ford’s pristine underwear, they were distressed with rips and snags.) Meanwhile, grayed tees and rugby shirts in ’90s Ralph Lauren–style graphics appeared to be the designer’s own pointed take on fashion’s current logomania. 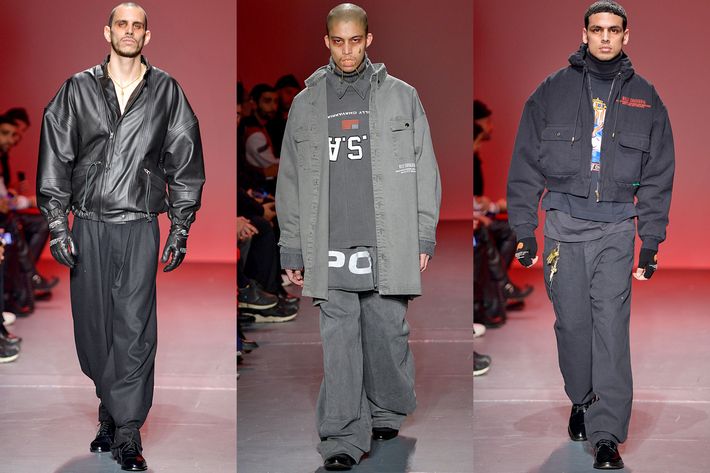 Gray is also the color of the business world, but Boss mostly left the flannel suits behind in favor of guys swathed in 50 shades or so of ankle-grazing overcoats, thickly knit turtlenecks to hunker down in and sybaritic extras like a baseball-uniform shirt in the thinnest, finest suede. A bright yellow trench coat offered cheer for gloomy days. 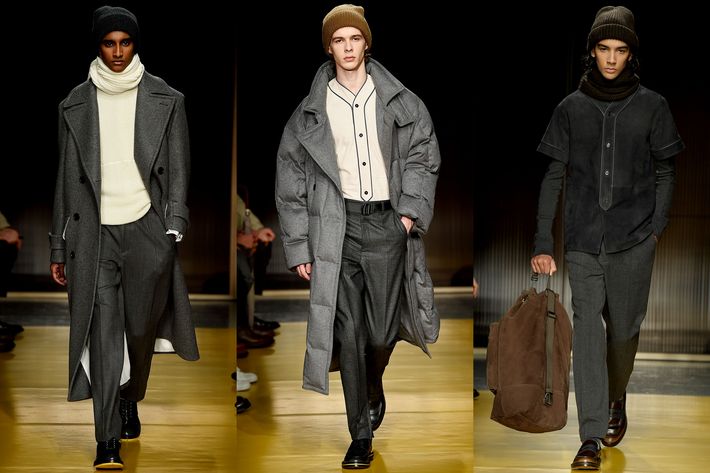 These days, you take it where you can find it.

+Comments Leave a Comment
Everything You Missed at New York Fashion Week: Men’s

runway beauty Yesterday at 6:07 p.m.
Forget an ‘It’ Bag. How About ‘It’ Ears? Burberry’s hottest runway accessory.
fashion Yesterday at 6:01 p.m.
Fendace: The Wife Swap of the Fashion World Versace and Fendi switched designers in an opulent, supermodel-studded show.
surprise surprise Yesterday at 5:33 p.m.
Guess Who’s Still Extremely Happy and in Love? These two, kissing again.
crime Yesterday at 4:33 p.m.
She Warned Us About R. Kelly. No One Believed Her. Sparkle has been waiting 20 years for this verdict.
By Angelina Chapin
scent memories Yesterday at 4:01 p.m.
For This Skin-Care CEO, Happiness Smells Like Fresh-Cut Grass Deciem co-founder Nicola Kilner shares her favorite scents, from Central Park to her brand’s brick-and-mortar stores.
By Erica Smith
law & order Yesterday at 3:45 p.m.
Treat Stealthing Like the Crime That It Is Already A change to California’s civil code could make the act of agreeing to protected sex and then surreptitiously ditching the condom illegal.
crime Yesterday at 3:36 p.m.
R. Kelly Found Guilty of All Counts in Sex-Trafficking Trial The singer could face life in prison.
crime Yesterday at 3:29 p.m.
The Most Harrowing Testimony From R. Kelly’s Trial The singer has been found guilty of all counts in his racketeering and sex-trafficking trial.
finer things Yesterday at 3:20 p.m.
Gloves That Will Never Go Out of Style Camel gloves to wear with your camel coat this winter.
By Emilia Petrarca
celebrity Yesterday at 3:05 p.m.
Lena Dunham Secretly Got Married She and musician Luis Felber tied the knot over the weekend.
free britney Yesterday at 2:08 p.m.
Wow, Jamie Spears Seems Obsessed With Britney’s Boyfriends The singer’s father reportedly went to great lengths to monitor her dating life, from making her boyfriends sign NDAs to hiring private investigators.
suspicious Yesterday at 12:55 p.m.
Are Angelina Jolie and the Weeknd Really ‘Just Networking’? A new euphemism.
a beautiful life Yesterday at 12:54 p.m.
Marc Jacobs on Beauty and Not Being Nutella “They say that if you please everyone, you’ve done nothing. Then you’re a jar of Nutella.”
mfw spring 2022 Yesterday at 12:24 p.m.
At Milan Fashion Week, Marni Gets Emotional Marni’s creative director, Francesco Risso, showed clothes that moved, in a presentation unlike any other.
By Cathy Horyn
street style Yesterday at 12:04 p.m.
Are New Yorkers ‘Dopamine Dressing’? After a colorful summer, will locals wear less black this fall?
working it out Yesterday at 12:00 p.m.
Code-Switching Has No Place at This Bed-Stuy Spin Studio “Wellness is a place where you should be able to bring your most authentic self because you’re healing.”
the most fertile man Yesterday at 11:54 a.m.
Nick Cannon Says His Therapist Thinks He Should Be Celibate Is his reign as Most Fertile Man coming to an end?!
brace yourself Yesterday at 10:49 a.m.
Bridgerton’s Back, Baby Netflix has dropped its first look at the second season’s main couple.
simple pleasures Yesterday at 10:42 a.m.
I Love How Much Channing Tatum Loves Memes “Broo I laughed and felt this hard!!!”
unreal Yesterday at 10:37 a.m.
The View’s COVID Chaos Continues Last week, two hosts tested positive for COVID mid-show — but it turns out their tests were inaccurate.
More Stories