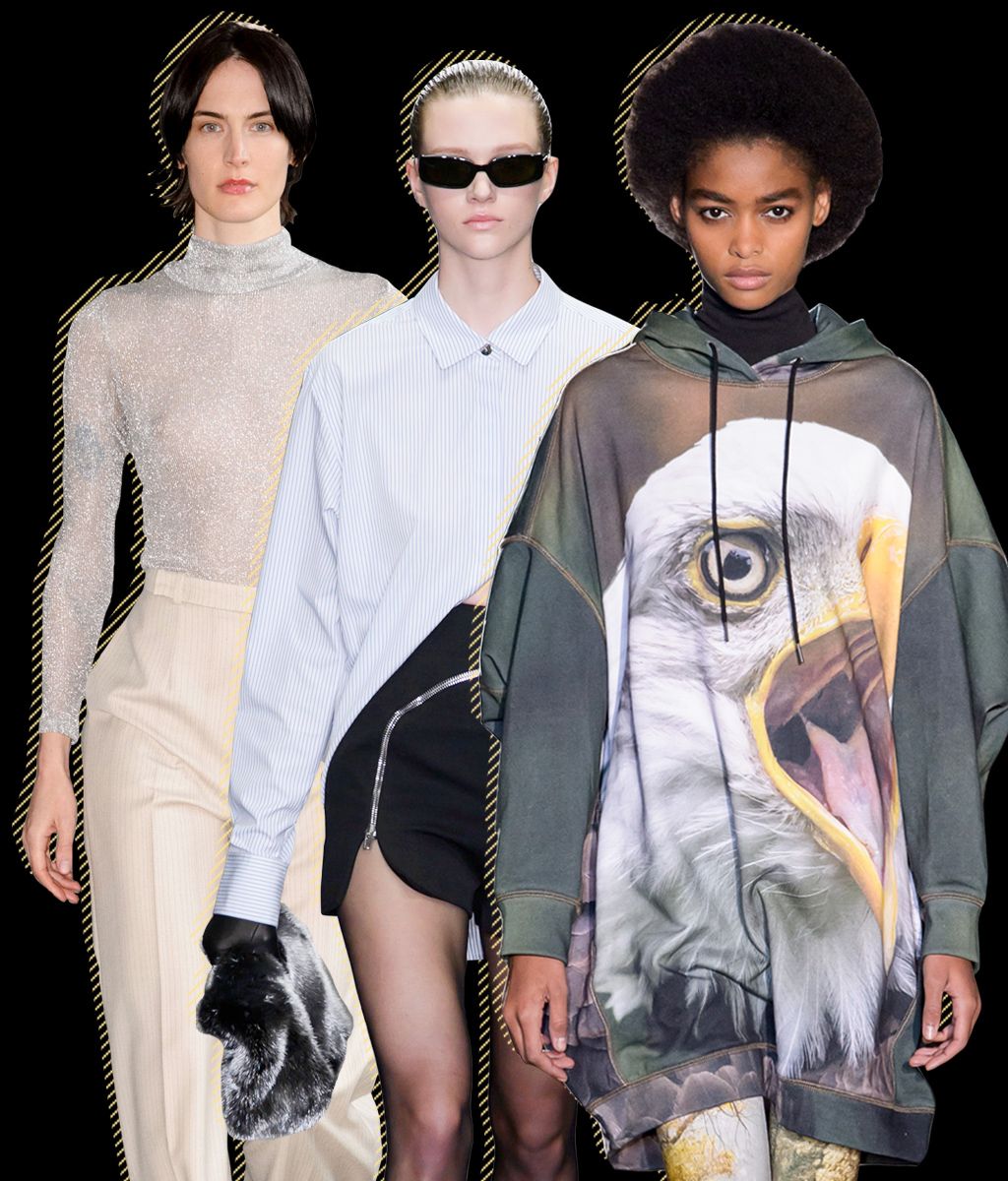 After an excruciatingly slow start to New York Fashion Week, the sense of movement and change was everywhere yesterday.

Alexander Wang took editors back to the former Condé Nast headquarters at Four Times Square, now a graveyard of cubicles and dangling wires, to show that he, too, had moved on. His collection of sleek black minis and silver-shot leathers, based on the archetype of the forbiddingly chic editor, was as sharp as any he has done. And though editors are less influential than when Wang was an intern at Vogue in the early aughts, and though the pencil-thin silhouette has a whole crop of competitors, the show worked precisely because of that reality. You don’t really think of Wang’s shows as a vehicle for fashion history — more like a party — but this was a clever way for an insider to both acknowledge these changes and step briskly forward. 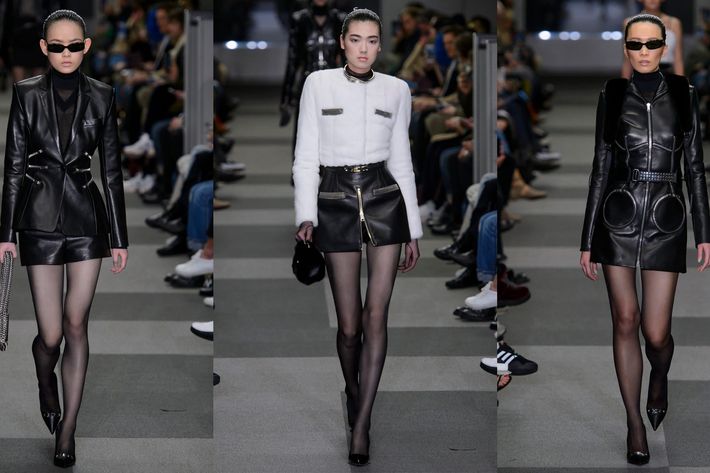 Other designers addressed new, more political, realities too. Chris Leba of R13 based his spirited show on the ongoing fight to protect public lands and wilderness, using recent protests at Bears Ears National Monument in Utah as inspiration for photo-printed sweatshirts and oversized tops dominated by an eagle’s head. The collection’s strength was actually less in its political awareness than in its associations with the great outdoors — say, a brightly colored down coat that suggests a sleeping bag or a spree of hunter camouflage, including overalls. A designer for many years at Ralph Lauren, Leba knows how to mine American themes and then highlight what feels newest and most youthful. This season, it’s those over-scaled shapes and in-your-face imagery. 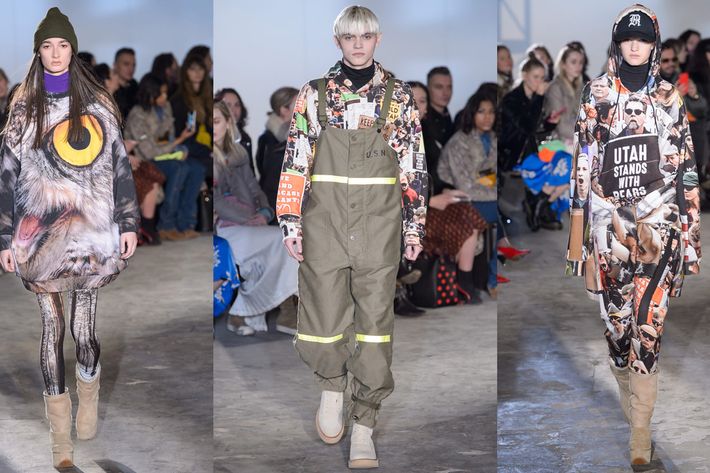 In a show called American Also, Kerby Jean-Raymond of Pyer Moss dealt with racial inclusion, specifically the black laborers who worked as early cowboys. “It’s just a way of acknowledging that we got left out of the Western American story,” Jean-Raymond said of his collection, which included beautifully done coats and pants with top-stitching, long crisp cotton shirts over wide pants, and artful Western-style jackets in leather patchwork. 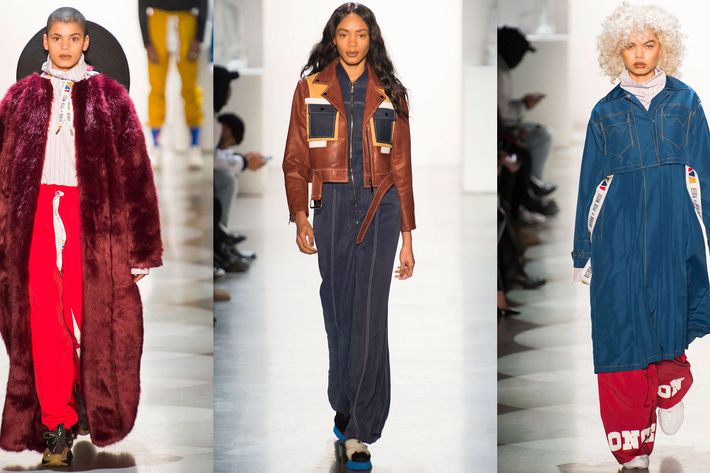 For the underrated Jean-Raymond, who recently bought out his business partner, giving him sole control over Pyer Moss, this show marked a personal change. He also showed a collection for Reebok, along with a new version of the DMX Fusion sneaker. I loved the bravado of those pieces, in particular a denim-blue dress worn over wide red track pants, the touches of glamour in the furs and big scarves, and the abstract use of the American flag. We’ve seen lots of iterations of athletic gear, but Jean-Raymond’s stands apart for its colors (patriotic plus deep red, mustard, and burgundy) and its silhouette; those ultrawide pants look amazing. (The Reebok-Pyer Moss line will be in speciality stores in August.)

“It was a tough sell,” Jean-Raymond said of the shapes. “I told the people at Reebok, ‘Trust me on this.’” He added with a laugh, before well-wishers flooded into the backstage, “Everybody’s just doing a logo and some sweatpants. We gave them work to do.”

The New York and L.A.-based label Eckhaus Latta also made significant strides, without losing that almost indescribable quality of cool which drew a huge crowd to Bushwick on Saturday afternoon. Indeed, part of the pleasure of watching the collections of Zoe Latta and Mike Eckhaus is how they plug their ever-growing knowledge of fashion and the industry back into their designs. Yet they remain artists at heart.

This season, they worked more on tailoring and blending their signature knitwear with woven pieces, like a sweet dress with a knitted bodice that extends into a dark chiffon skirt, and a puffy bomber jacket in a nubby red wool with a knitted waistband. They also showed their version of a portrait-collar jacket in Regency stripes and a knitted ensemble that seemed a takeoff on the Chanel suit. It might seem a bit odd that designers who got their start by reworking dead-stock fabrics and showing the funky results on friends should now be drawn to historical examples of couture. But that openness and curiosity is also what keeps Eckhaus Latta moving. 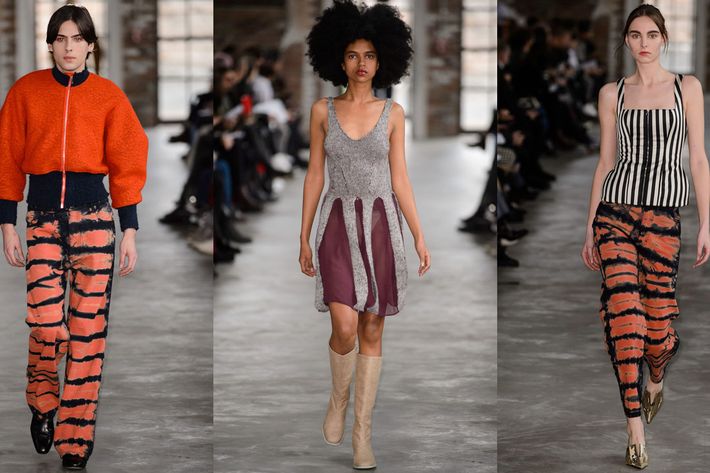 The killer look came at the very last: a striped corset over slim pants in a blurry, rust-red and black print. The play of stripes and bold print, along with the bustier, made me half-wonder if Latta and Eckhaus had looked at vintage Lacroix. But that was the beauty of the design: If they were inspired by French couture, it was only the trace of an impression that remained.

friday sales 11 mins ago
20 Things on Sale You’ll Actually Want to Buy: From Dr. Martens to Buffy Including our top picks from the Target Deal Days and Amazon Prime Early Access sales.
weddings 12:10 p.m.
Taylour Paige Got Married on Her Birthday Two weeks after announcing their engagement, she and Rivington Starchild tied the knot.
always shopping 12:00 p.m.
It’s Time to Invest In a Camel Coat Here are 17 for every budget.
art and soul 11:37 a.m.
A Revolution in Midtown Linda Goode Bryant created her gallery, JAM, because Black artists weren’t welcome in the Establishment. Now, it’s at MoMA.
extremely online 11:11 a.m.
I Can’t Shut Up About Butter Boards TikTok’s latest obsession involves consuming an unforgivable amount of butter.
obsessive tester 10:00 a.m.
The Longest-Lasting Nail Polishes, According to a Manicure Obsessive Starting at $7.
By Cleo von Siebenthal, Erica Smith, and Kathleen Hou
culture 9:00 a.m.
What Can Choreography Teach Us About Childhood Friendships? The “sleepover dance” might be the key to forming a lasting bond.
relationships 9:00 a.m.
Why Are We Still So Scandalized by Cheating? What our recent obsession with infidelity reveals about us.
¡hola papi! 6:00 a.m.
‘How Do You Know If You’re With the Right Person?’ People enter our lives for a time, and there are ways they are “right” and ways they are not.
By J.P. Brammer
rabbit hole Yesterday at 5:45 p.m.
The Lengths I’ll Go to Find a Great Ankle-Length Coat A seasonally relevant shopping rabbit hole.
tv Yesterday at 3:30 p.m.
Excuse Me, Who Is This British Baking Show Hunk? Hellooo, Sandro!
divorce rumors Yesterday at 3:20 p.m.
Gisele Bündchen and Tom Brady May Be Over for Good Bündchen was spotted burning sage outside her car.
5 questions with... Yesterday at 2:44 p.m.
Scarlett Johansson on Her Beauty Regrets and Her Closet Full of Coats Beauty founders Scarlett Johansson and Kate Foster discuss the challenges of a “clean beauty” brand.
nope! Yesterday at 2:33 p.m.
Great British Bake Off’s Mexico Week Is As Bad As It Sounds You’d think contestants would know how to eat a taco — or at least how to pronounce “guacamole.”
gone sale-ing Yesterday at 2:26 p.m.
Here’s How to Shop Target’s Deal Days Prime Day who?
excerpt Yesterday at 1:00 p.m.
Dreaming to Decolonize: An Excerpt From Rest Is Resistance “To rest in a DreamSpace is a red brick through the glass window of capitalism.”
hilary swank Yesterday at 12:46 p.m.
Hilary Swank Is Pregnant With Twins “It’s such a blessing. It’s a total miracle. It’s unbelievable,” said the actor.
obsessive tester Yesterday at 12:36 p.m.
The 9 September Beauty Launches We Tried and Loved Last month was a lot.
celebrity Yesterday at 11:57 a.m.
Britney Spears Does Not Accept Her Mom’s Instagram Apology “I am soooo sorry for your pain,” Lynne Spears wrote in part.
power Yesterday at 11:56 a.m.
The Herschel Walker Campaign Keeps Getting Messier The “pro-life” candidate’s own son denounced him following reports that he’d paid for a girlfriend’s abortion.
More Stories