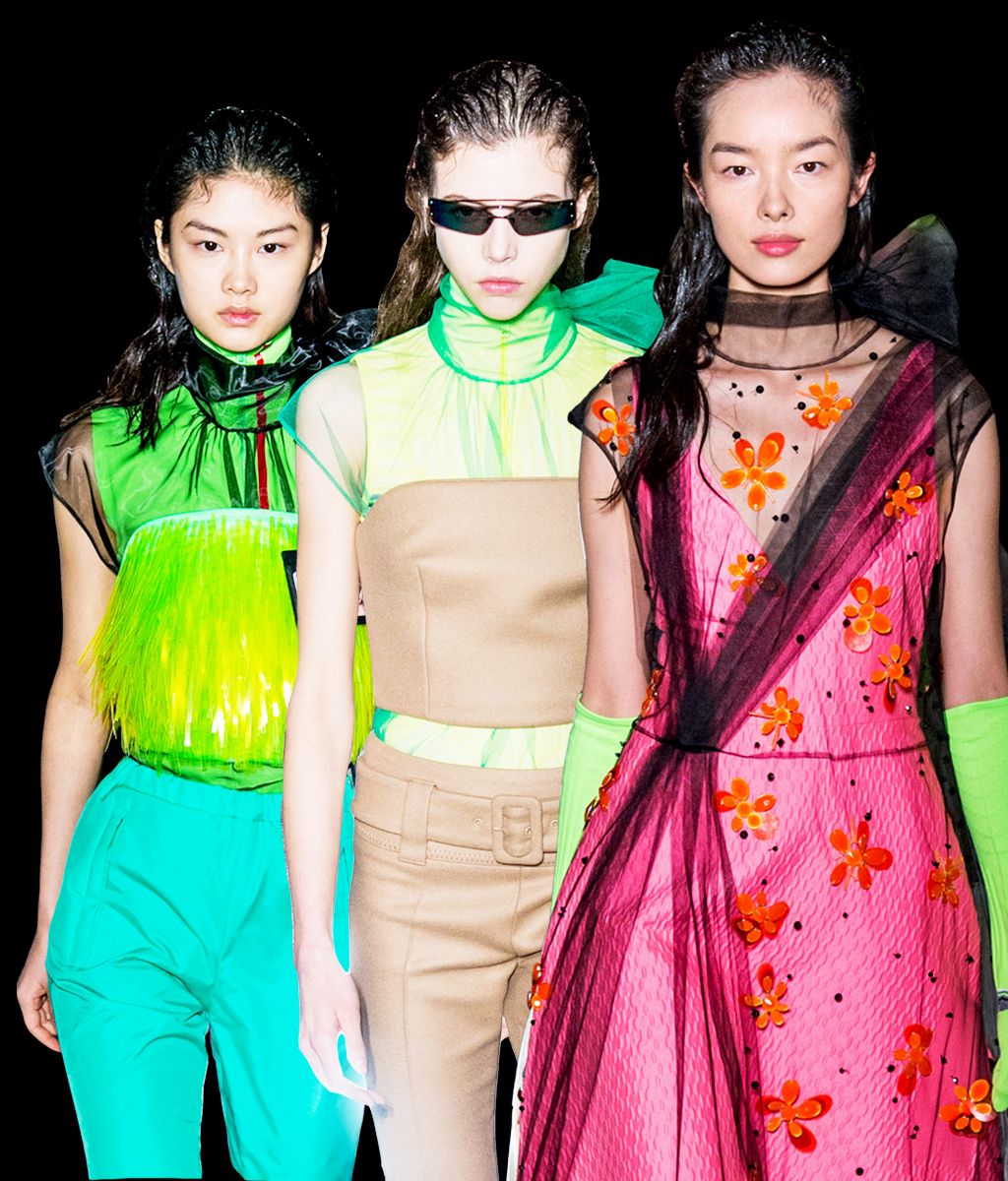 The first two days of Milan Fashion Week proved to be a chase with the proverbial white rabbit. Not only because I feared I would be late for a very important date (as I was, many times), but also because Italian houses welcomed us into various alternate realities.

On Thursday night, Miuccia Prada hosted her fall 2018 show inside the nearly finished Rem Koolhaas tower of Fondazione Prada. Attendees faced a wall of windows overlooking train tracks and a cluster of neon signs, which hung atop cranes and represented motifs from past Prada collections, like bananas. The signs blended seamlessly with the twinkling Milan cityscape in the background — their combined glow reflecting off the polished runway, which mirrored models as they walked.

The scene felt very Italian Blade Runner. An eerie, remixed version of Blondie’s “Heart of Glass” played as the show began, followed by a similarly warped version of “Flash in the Night” by Secret Service.

The clothes were a show of bright neons as well, with hot-pink tulle worn underneath a puffy black nylon, for contrast. The collection was yet another experiment in layering seemingly mismatched elements in sensible ways, like rubber boots with cocktail dresses, or turtlenecks under bustier tops. The woman who wears these pieces is the Milanese dweller of the future. She may have to wade through some industrial slime to get from A to B, but she’ll look f-ing great doing it.

While the clothes themselves at Prada were not overtly futuristic — save for the inclusion of some teeny-tiny Matrix sunglasses — the future was on Ms. Prada’s mind this year. “We are living in a period which is interesting because we do not know where we are going,” she reportedly told press backstage at her fall 2018 menswear show, which was inspired by virtual reality, and featured similar elements to the women’s show, like revamped Prada Sport pieces. “Of course scary, of course worrying,” Ms. Prada added. “But also interesting because of the feeling that big changes are coming.”

In an effort to keep up with the times, Prada tapped a viral, virtual, CGI-generated “It” girl named Lil Miquela to do an Instagram-story takeover for fall 2018 women’s on Thursday and introduce a range of special GIFs. The brand also “dressed” Lil Miquela in head-to-toe Prada for the occasion, proving the brand really does have something for everyone.

Go off!! #pradagifs are live in stories! Start posting and tag me 😈 #PradaFW18 #MFW

Believe it or not, Lil Miquela was not the first cyborg to arrive in Milan this week. On Wednesday, designer Alessandro Michele showed his own Gucci Cyborg, inspired by Donna Haraway’s “A Cyborg Manifesto,” which speaks to the blurred lines between man, machine, and animal. For Haraway, the cyborg is a metaphor for the feminist subject, who is free of societal labels and constraints. In other words, someone (or something) emancipated from our current reality.

Fendi also showed a forward-thinking collection on Thursday, taking the philosophical idea of a hybrid and commercializing it. One standout piece was a sweater that “reappropriated” the brand’s logo with Fila’s. Millennial shoppers are sure to love the look, as it allows two completely different symbols to live on the same body — an act that feels youthfully mischievous, like adding a Mento candy to a bottle of Coke and watching it explode. Combining unlikely references is not only more interesting, but also just way more fun.

Fashion’s goal has always been to show what’s new and next, but what’s exciting about this season in Milan is the freedom these designers see for the future, which includes remixing the past. What Miuccia Prada, Karl Lagerfeld, and Alessandro Michele in particular seem to understand is that the next generation of buyers wants to be able to try on lots of different personas at once, as opposed to aligning with a singular vision. This is how we exist in the digital world, and our wardrobes should reflect the boundless beauty of the internet.

It’s fashion for a finstagram generation — one where we carry around infinite selves on our phones, much like a second head. In the future, we won’t have to choose between the red and the blue pill; we can have it both ways.

See every look from prada fall 2018

At Gucci, Models Carried Replicas of Their Own Heads

school shootings Yesterday at 8:10 p.m.
A 15-Year-Old Reportedly Opened Fire at a Michigan High School A suspect has been charged as an adult in the shooting and death of four students.
culture Yesterday at 7:47 p.m.
This Professor Reportedly Claimed To Be Indigenous For Years Carrie Bourassa has been accused of faking her Indigenous heritage.
power Yesterday at 6:00 p.m.
The Most Sinister Argument of Today’s Supreme Court Hearing The Court’s conservative justices can’t pretend their opposition to Roe isn’t political.
news Yesterday at 4:57 p.m.
Chris Cuomo Is Out The news anchor called his CNN suspension “embarrassing.”
the cut podcast Yesterday at 3:45 p.m.
Would You Freeze and Share Your Eggs?  On this week’s episode we discuss the program looking to make egg freezing more affordable.
By the Cut
gifts they might actually want Yesterday at 3:15 p.m.
The Best Secret Santa Gifts Under $25 (That You Can Buy on Amazon) From a stainless-steel pierogi press to a banana-shaped cat toy.
By Dominique Pariso
women in sports Yesterday at 3:10 p.m.
Puma Has Its First Women’s Basketball Collection Designed by creative director June Ambrose, it can be worn both on and off the court.
tastemakers Yesterday at 3:05 p.m.
The Activist Who Created the Most Instagrammable Pan Shiza Shahid has done it all, from co-founding the Malala Fund to designing amazing kitchenware.
honesty Yesterday at 2:54 p.m.
Your Spotify Wrapped Is Embarrassing, and I Want to See It Don’t worry — mine is probably worse!
style Yesterday at 2:51 p.m.
At Art Basel, A Tribute to Virgil Abloh Kanye West, Kim Kardashian West, Pharrell Williams, and more gathered in Miami to remember Abloh.
rust Yesterday at 2:30 p.m.
What We Know About the Rust Movie Shooting In a new interview, Alec Baldwin says he didn’t pull the trigger of the gun that killed Halyna Hutchins.
hairy situations Yesterday at 2:29 p.m.
17 Hair Masks to Sit and Marinate In for a While Your dry, damaged, or dull hair deserves a treat.
By Erica Smith
store openings Yesterday at 2:17 p.m.
6 New Stores to Shop at This Holiday Season Mara Hoffman and more new stores in New York City.
covid-19 Yesterday at 2:00 p.m.
What We Know About the Omicron Variant So Far Officials have confirmed the first U.S. case of the Omicron variant in California.
By Katie Heaney
apologies Yesterday at 1:33 p.m.
Alice Sebold Apologizes to the Man Wrongfully Convicted of Raping Her The Lucky author said she’ll continue to struggle with how she unknowingly played a part in putting an innocent man in jail.
power Yesterday at 1:05 p.m.
Donate to an Abortion Fund Right Now If you’re terrified about losing Roe v. Wade, it’s the best thing you can do.
By Bridget Read
maxwell trial Yesterday at 12:29 p.m.
Witness Says Ghislaine Maxwell Groomed Her at Age 14 And more key testimony from the trial of Jeffrey Epstein’s alleged partner in sex crimes.
reading Yesterday at 11:58 a.m.
Heidi Montag Is Tweeting About Books Again She wants to read them!
astroworld Yesterday at 11:05 a.m.
Half of Victims’ Families Rejected Travis Scott’s Offer to Pay Funeral Costs “If you gave a shit about these families, you wouldn’t have to put out a press release for everyone to see.”
politics Yesterday at 10:13 a.m.
‘The Mayor Knew’ Eric Garcetti’s top aide was a serial harasser, according to multiple accusers. The mayor, they say, ignored it.
More Stories